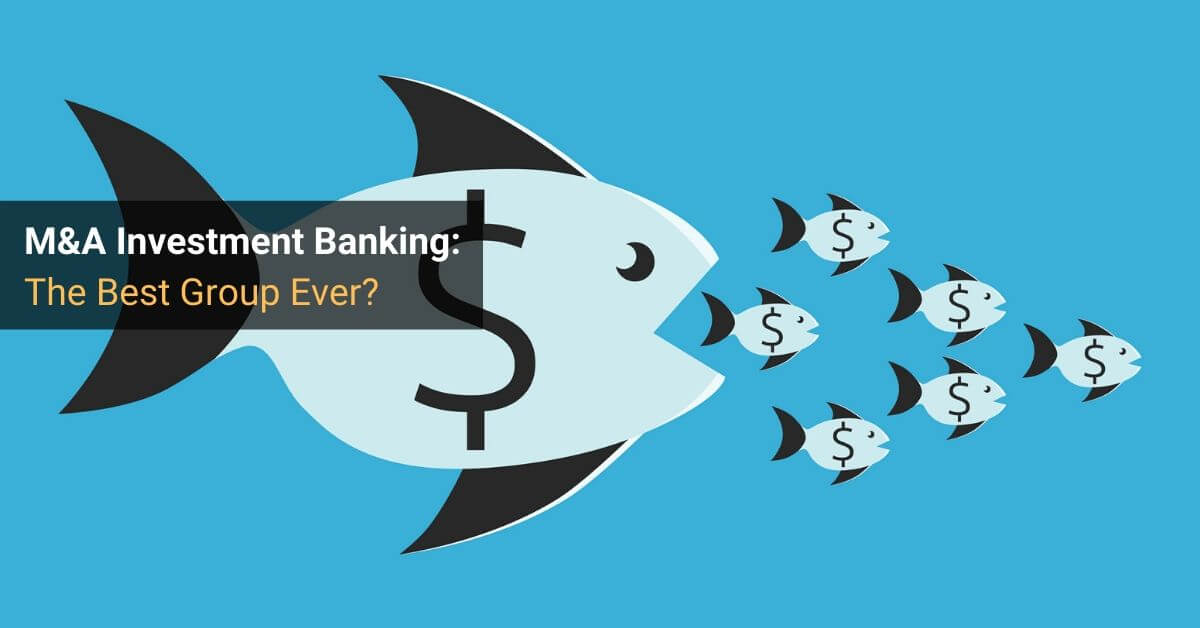 Ask anyone about the “best” group in investment banking, and one name will come up repeatedly: Mergers & Acquisitions (M&A).

It’s so mythical that we even used a slight variation for the name of this website.

These claims present a few problems: for example, is aligning shapes on a PowerPoint slide ever an “intellectually challenging task”?

But there’s another problem as well: most people making these arguments don’t understand that working on deals is often boring and repetitive.

M&A investment banking has some benefits, but the hype is far ahead of the reality:

What is M&A Investment Banking?

Definition: In M&A investment banking, bankers advise companies and execute transactions where the companies sell themselves to buyers, acquire smaller companies (targets), and divest or acquire specific divisions or assets from other companies.

In sell-side deals, you advise a company that wants to sell – either the entire company or just one specific division.

In buy-side deals, you advise a company that wants to acquire another company or another asset or division.

As an Analyst or Associate, you don’t “advise” anyone – you crank out Excel and PowerPoint, answer information requests, and keep track of potential buyers and sellers.

The experience differs for sell-side vs. buy-side deals, but also based on whether the deal is targeted or broad.

In targeted deals, the buyer and seller are often talking already, or a company wants to focus on just a few likely buyers or sellers.

In broad buy-side deals, you show a company dozens or hundreds of potential acquisition targets and try to find something that interests them; in broad sell-side deals, you run an “auction” where you pitch the company to (potentially) dozens of buyers.

Targeted deals tend to have less process work (contacting and tracking buyers and sellers, responding to their requests, writing the Teaser and CIM, etc.).

Instead, the senior bankers spend a lot of time negotiating, and the Analyst and Associate spend more time on Excel-based analysis and deal presentations.

Broad deals tend to have more process and research work, which could involve any of the following:

For many of these companies, there are only a few plausible buyers and sellers due to their size.

That means that you’ll spend far more time on the following tasks:

These tasks may sound interesting, but by the 117th time you’ve done them, they can get quite repetitive.

You rarely get the time to learn an industry or company in-depth because you run the same analyses in Excel, make slight tweaks, and then re-run them with new companies or deal terms.

At smaller firms – middle market banks and regional boutiques – the process is more about learning a company, its strategy and industry, and positioning it for potential buyers.

Executives at smaller companies also tend to be less experienced with M&A, so you spend more time walking them through the process and explaining everything.

As an Analyst or Associate at a smaller bank, your tasks could vary wildly.

I’ve seen cases where junior team members speak with the CEO or CFO to answer questions, but I’ve also seen cases where they write the CIM, track buyers/sellers, manage the data room, and do little else.

But it’s fair to say that you will not get as much exposure to valuation and financial modeling if you’re at a smaller bank.

That’s because the financial analysis is often far less relevant for deals involving smaller companies; for example, think about Apple or Google acquiring a private startup for $50-$100 million.

For trillion-dollar companies, that type of deal is the equivalent of buying coffee.

Broad sell-side deals are more common at smaller banks that work with smaller companies (<$1 billion market cap) where there might be dozens of potential buyers.

The steps in the process are as follows:

Most of the technical work here happens in steps 2 and 7-8, where you may have to build an operating model, valuation, and/or merger model for the final buyer(s).

But beware: modeling work often represents a very small percentage of time in this process.

Completing the Teaser, CIM, and Management Presentation alone could take weeks because you’ll often go through dozens of revisions with the client.

If you look at the entire process, it’s rare to spend more than ~20% of your time on modeling-related tasks.

Oh, and one more thing: if the seller is a public company in the U.S., you will probably have to draft a Fairness Opinion before you can announce the deal.

Yes, this is “technical work,” but in my view, it’s tedious work that involves combing through filings and looking for obscure charges; it’s also not great to speak about in interviews.

It’s harder to give the exact process here because it depends heavily on the context: how long have the buyer and seller been talking? Has the seller hired you to get a better price from this one buyer, or to find a better buyer altogether?

If we assume it’s a deal where the buyer and seller are in preliminary discussions, and the seller wants to do a “market check” with 4-5 other buyers, the process might look like this:

The main difference is that there’s far less process work here because you already have at least one seriously interested buyer.

This process is more common at large banks, and you will spend a lot of time on step #3: running analyses with different potential buyers and deal structures.

After you’ve done enough of these, you start forgetting specific company names, and everything starts to blur together.

In a targeted buy-side M&A deal, the process is the reverse of the one described above.

You might also find a few other potential targets, research them, create valuations and merger models, and propose them in case the original deal falls through.

A long time ago, teams often liked to work on buy-side M&A deals so that the DCM or Leveraged Finance groups could then provide financing for the deal, earning more fees for the bank in the process.

In the current environment (2020), though, that’s far less of a factor, and banks are more than happy to earn just the advisory fee if someone else is providing the financing.

As an Analyst in a targeted buy-side M&A deal, you’ll still spend a lot of time running different scenarios for the purchase price, deal structure, synergies, and so on, and looking at deals involving other companies.

In broad buy-side M&A deals, the process goes more like this:

Many bankers view broad buy-side M&A deals as wastes of time because they’re much less likely to close than other deal types, meaning the bankers won’t get paid.

However, I would argue that broad buy-side M&A deals are good to speak about in private equity interviews and corporate development interviews because they are close to the actual job in PE and CD.

Also, you could end up doing more modeling work than in broad sell-side M&A deals because you might have to value multiple companies and look at deals involving many of them.

Mergers vs. Acquisitions vs. Divestitures

We sometimes get questions about how mergers differ from acquisitions, and how buying/selling entire companies differs from buying/selling specific assets.

The short answer is that in any M&A transaction, there must be a buyer and a seller. The only difference is that in a merger, they are usually about the same size, but in an acquisition, the buyer is significantly bigger.

That creates other differences as well; for example, in mergers, 100% Stock or > 50% Stock deals are far more common because one company rarely, if ever, has enough Cash and Debt capacity to acquire another company of the same size.

With divestitures – buying/selling a specific asset or division rather than the entire company – the main difference is that it’s much tougher to gather the information and produce a reasonable “standalone” model.

It’s not always clear how much of an independent entity the division is, or how much in additional expenses it would require outside its parent company.

Valuation and merger models are trickier for similar reasons: Do you discount the multiples? Increase the company’s expenses? Assume higher/lower synergies? Will integration costs be higher/lower than expected?

Buy-Side vs. Sell-Side M&A: Which Is Best?

Traditionally, many bankers argued that broad sell-side M&A deals were “the best” because:

For senior bankers such as Vice Presidents and Managing Directors, these deals probably are the best because they need transactions that close in order to advance.

However, if you’re in IB because you want to move to buy-side roles – especially in private equity or corporate development – buy-side M&A deals may offer a better experience.

That’s because you have to think like an investor in these deals:

Also, you’ll often get more modeling/valuation experience (not relevant for the senior bankers, but quite important for exit opportunities).

Your chances of closing buy-side M&A deals are lower, but with the earliness of private equity recruiting, I’m not sure that matters much anymore.

Almost everyone at large banks goes into the process with minimal deal experience, so in interviews, they need to spin pitches and early-stage deals into sounding more significant.

And I think it’s easier to spin buy-side M&A deals into sounding relevant for PE roles than it is to spin sell-side experience where you wrote a Teaser but haven’t done much else yet.

The exit opportunities here depend on the size of your bank more than on the group.

To have the best shot at PE and HF roles, you need to work in M&A at a bulge bracket or elite boutique bank; you can also do it from middle market banks and industry-specific boutiques, but it’s more difficult and will require a lot more networking.

Outside of those, corporate development is a good exit option, and probably the best one if you’re doing M&A at a boutique investment bank.

Venture capital is also a possibility, as is growth equity.

You would probably not be the best candidate for asset management roles coming from an M&A group; similarly, the corporate finance skill set won’t overlap that much with yours.

To be clear, though: your exit opportunities from M&A investment banking are not necessarily “better” than those from a strong industry group (see: industry groups vs. product groups).

If you’ve gained solid deal experience, and your group has a track record of sending Analysts to buy-side roles, these groups are not much different.

Summing up everything above, here’s how you can think about M&A investment banking:

The bottom line: Yes, M&A investment banking has some advantages, especially at larger banks, and it sets you up for exit opportunities more effectively than groups like ECM or DCM.

But it’s difficult to make the case that M&A is always “better” than a strong industry team, especially if you already have an industry preference or you’re at the MBA level, and you have work experience in a matching field.

If you want to be a career banker, the earnings potential is higher in M&A than in capital markets, but again: not necessarily more than Leveraged Finance or a good industry group.

So, I think it’s time for the hype around this one to die down a bit.

Especially since very few tasks in Excel and PowerPoint are “intellectually challenging.”