Investment Banking Exit Opportunities: The Myth of the Buy-Side Job 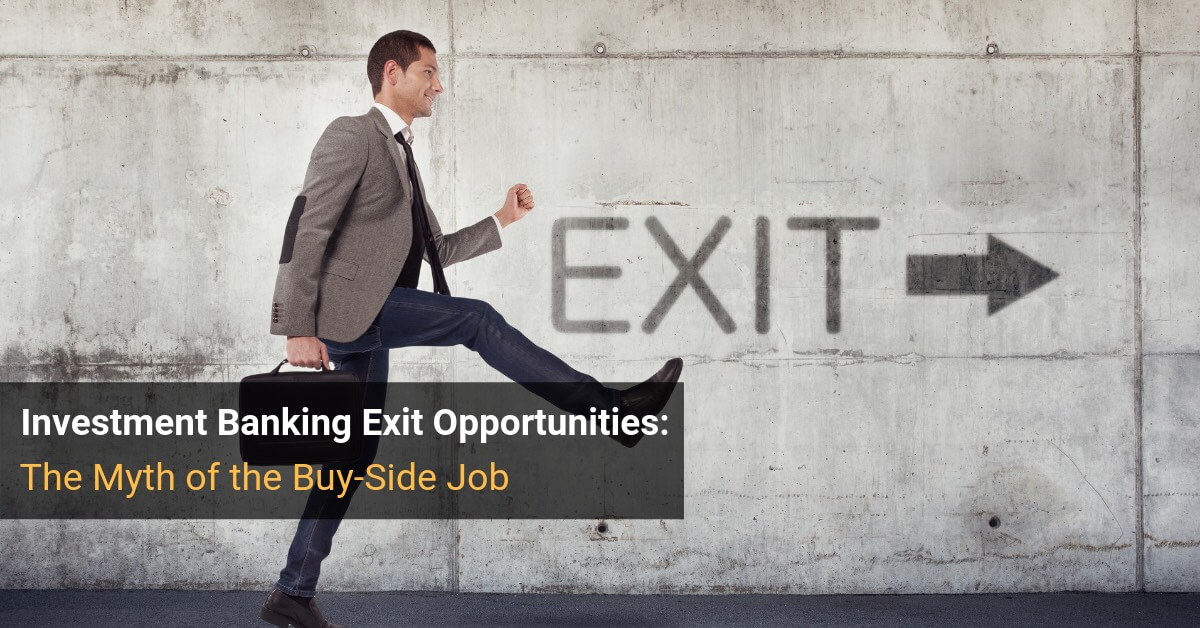 What’s the easiest way to distinguish an American investment banker from a European one?

But something much simpler also sets them apart: The American banker is far more obsessed with exit opportunities.

Many articles, videos, and forum posts jump into a comparison of different “exit opps” without defining what an exit opportunity is.

Often – though not always – this field involves investing in companies instead of advising companies, or acquiring companies rather than advising on those acquisitions.

Other examples include investor relations, equity research, a different group or a different bank, or an MBA, though some of those are not true “exit opportunities.”

Bankers are motivated to move into these other fields because the work is more intellectually engaging, the pay is higher, and the hours are slightly better.

For many years, the thought process behind investment banking exit opportunities was:

“I’ll suffer through investment banking for 2-3 years and work terrible hours, but that suffering will allow me to move into a more interesting and lucrative role with better hours in the future.”

This reasoning is flawed for many reasons:

Then there’s the social aspect – you’re more of a “lone wolf” in many of these roles since you have to come up with investment ideas and drive deal processes by yourself.

All those drawbacks still exist; almost nothing about the work itself has changed.

First, you need to start much earlier to even get into investment banking since the recruiting timeline has moved up and now starts over a year in advance of internships.

You pretty much need to be set on IB from your first year in university and then complete a sequence of internships in your first and second years to have a good chance.

Also, buy-side recruiting starts ridiculously early, everyone knows about industries like private equity and hedge funds, and, while you’ll get some compensation and lifestyle improvement in those fields, it’s not quite as dramatic as it was a long time ago (say, the mid-2000’s).

The Best Way to Think About Investment Banking Exit Opportunities

These changes mean that you should not think of investment banking exit opportunities as the be-all-and-end-all.

Even the word “exit” is problematic because it implies that you’ll only move in one direction: from investment banking to something else.

But if you read some of the reader accounts on this site, you’ll see that reality is not quite so rigid.

It’s better to think about exit opportunities like this:

“I’ll test various fields with internships in university, or with pre-MBA internships or school-year internships during a Master’s program, then go into investment banking, and then think about returning to one of those fields.”

What Do You Need for the Best Investment Banking Exit Opportunities?

To pursue the “best” exit opportunities – the most selective or prestigious ones – you need:

So if you have a choice between two bulge brackets, don’t choose based on which one is “more prestigious”: Pick based on the team and culture you prefer.

If you’re at a middle-market or smaller firm, you can still win exits, but you’ll have to do a lot more work on your own and aim for smaller companies.

You should also avoid super-specialized groups such as FIG if you don’t want to work in those industries in the long term.

And if you want to be in private equity, avoid teams like ECM or DCM because you won’t get much real deal exposure there.

Which One is Right for You? Rank the Investment Banking Exit Opportunities!

Someone will now ask for a “ranking” of exit opportunities.

I won’t do that, but I will briefly describe the trade-offs of the most common ones:

Private equity is best if you enjoy working on deals, but you want to think about them more critically and work with companies over the long term – years instead of months.

You have a lot of options if you go into PE and decide you don’t like it: you could go to business school, join a portfolio company in a finance role, or even move to some other investment banking exit opportunities.

You get more of a “generalist” skill set because you’re not doing just one thing over and over: It’s a mix of financial analysis, negotiations, leadership/team coordination, and sales skills (if you do sourcing or fundraising).

Compensation is another positive, but to make serious money – in the 8-figure range or beyond – you’ll have to advance to a very senior level or start your own firm.

Besides the fact that it’s so difficult to get into private equity, another drawback is that it’s very tough to get promoted up to the top.

Partners at these firms have such cushy positions that hardly anyone leaves voluntarily.

Hedge funds are so different from private equity that it’s almost deceptive to group them together.

The main difference is that you follow and invest in individual companies, or other securities, rather than buying and selling entire companies.

The day-to-day work is more stressful since you monitor the markets constantly, but you’re less likely to have a disaster on a pending deal that kills your weekend.

You should consider these roles only if you have a track record, an undying passion for investing, and specific ideas; you don’t necessarily need those in PE since you can talk about your deal experience, but it’s essential here.

The main downside to these roles is that you develop a very specialized skill set, which makes it difficult to move to different funds or different industries.

It’s also tougher to get into top MBA programs because it’s difficult to explain a complicated investment thesis to admissions committees.

By contrast, it’s easier to explain a deal or a difficult client situation, so you have an advantage coming from IB/PE roles.

For more coverage of this topic, please see our article on hedge funds vs. private equity.

And for even more, check out the one on hedge fund strategies.

Venture capital is sort of like “private equity lite”: You still work with entire companies, but the deals consist of minority-stake investments.

Since you invest in early-stage companies, there’s less financial analysis, and you spend most of your time analyzing the market, finding interesting companies, and networking.

You also earn quite a bit less than you do in private equity, but the hours and lifestyle are better.

If you want a long-term venture capital career or you want to work at a tech or biotech startup in a finance or business development role, VC is a good path for you.

But if not, it’s not necessarily the best option: It’s even more difficult to move up the ladder since firms make hard distinctions between Partner-track and non-Partner-track positions.

Also, while you can get into top MBA programs from VC roles, it would be tough to move into private equity, go back into banking, or go to a hedge fund.

Corporate finance is quite different from these other exit opportunities because it’s arguably not even a front-office role.

In other words, you’re not working with clients or companies that your firm might potentially invest in – the corporate finance career path is mostly internal and related to your company’s budgeting, internal processes, and financing needs.

You’ll earn less than in the PE/HF/AM exit opportunities, but you’ll also have better hours and a more regular lifestyle.

The end goal in corporate finance is to become the Chief Financial Officer (CFO), which has various trade-offs vs. becoming a Managing Director in investment banking.

Corporate finance roles are best if you want a better work-life balance, you don’t care about a slower progression up the ladder, and you want to use your skills at a real company that makes something.

We group corporate finance and corporate development together on this site, but the roles are quite different.

Corporate development careers all about working on acquisitions and joint ventures at a company – deals – rather than the budgeting and financing processes at that company.

So if you like working on deals and longer-term projects, but you want a better lifestyle than what you’ll get in PE, and you’re willing to accept lower pay, corporate development is a solid option.

If you work at a well-known company, you’ll have many options afterward: You could go to business school, go back into investment banking, or even go into private equity.

It would be tough to enter a public markets role such as hedge funds or asset management from here, but I’m sure someone has done it before.

This last one is very different from everything else on the list.

It’s not exactly in the traditional “investment banking exit opportunities” set, and it’s more of a “trendy thing” for bankers to do.

The banking skill set is not particularly useful for these roles unless you join a later-stage startup that has budgets and customers.

The main advantage of this path is that you get to determine your destiny.

The disadvantages are that the risk-adjusted returns are terrible and that it will be almost impossible to go back into finance if you’ve run your own business for a long time.

It would also be tough to move to a normal company if you’ve run your own business for years and years.

So you have to be pretty certain you want to go this route, and if you decide against it, you need to get out ASAP.

Take a look at the Articles page on the site or do a search to find coverage of other industries.

This obsession with investment banking exit opportunities is a U.S.-specific phenomenon, and it makes less sense now than it did in the past.

While the work is still less interesting than critically analyzing deals or investing, there are some benefits to a career in banking:

To Exit or Not to Exit: Is That the Question?

Rather than thinking about “investment banking exit opportunities,” you should think about your long-term career progression.

Test out different industries with your internships, see what you like and don’t like, and then see what you think of your full-time role in banking.

If you want to leave and you have your heart set on a mega-fund, move quickly!

If not, take your time and see what fits you best.

With enough time and treatment, you might just lose your obsession with exits.

Do it well enough, and people might start thinking you’re European.

Take a look at Private Equity Exit Opportunities: How to Check Out of Hotel California.