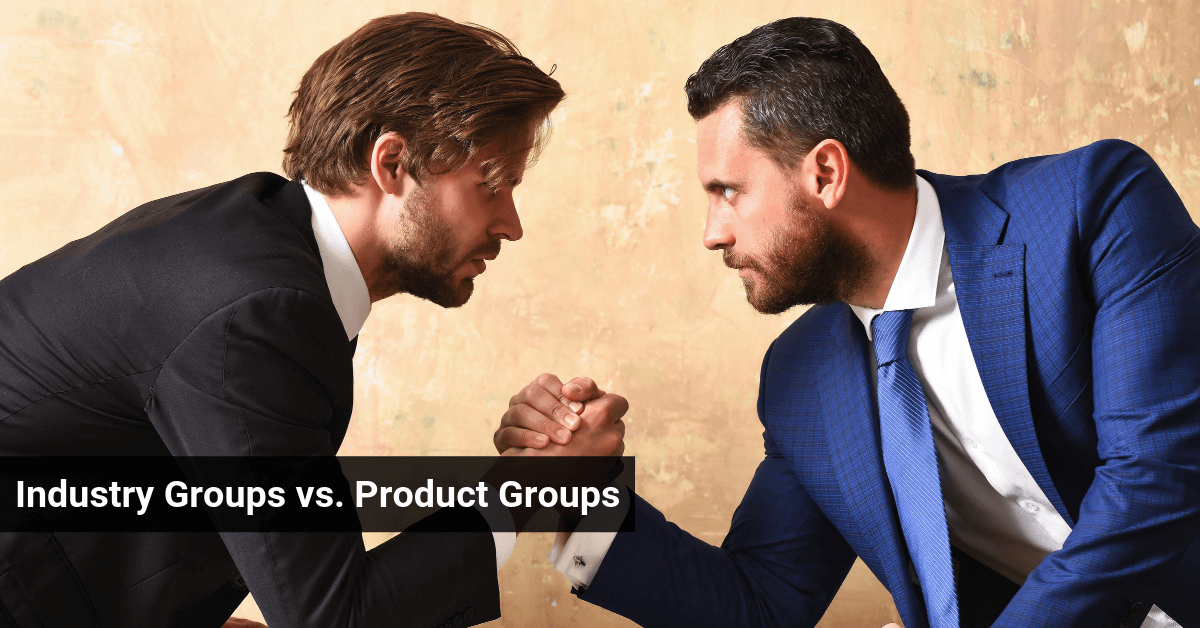 “Why would you ever take an industry group over M&A or Leveraged Finance? Don’t you want to buy entire countries when you move into PE?”

“If you’re not modeling you’ll get bottom-tier bonus!”

Just like the debate over cardio vs. strength training, models vs. bottles, and boutiques vs. bulge brackets, there’s so much fervor on both sides that you’d almost think war was about to break out.

Actually, I lied: it’s not quite that heated, but let’s dive right into the debate and see what the arguments for both sides are.

Investment banking product groups always work on a specific deal type, such as M&A or debt, across all different industries – examples include:

So if you’re in the M&A group, you’ll always work on acquisitions of other companies across all industries and you’ll build so many merger models that you may get Excel burned into your retina.

With investment banking industry groups, by contrast, you work within one industry but on many different types of deals – equity, debt, M&A, and so on. Examples include:

Except that this division is wrong – or at least not 100% accurate. There are several sub-divisions of groups at a bank:

When most people talk about “industry groups,” they’re referring to coverage groups.

This Thing of Ours

So what do you actually do in an industry group vs. a product group?

The main difference is that industry groups focus more on knowledge of the industry, what different companies are doing, and building operating models (3-statement models) for companies.

Product groups, by contrast, get to know specific transactional models – merger models or LBO models – really well, but won’t do much outside that and won’t learn an industry in as much depth.

There’s a lot of hype over product groups because most people assume that you can get into PE more easily if you start out in Leveraged Finance or M&A.

But that’s not necessarily true, and if your bank’s M&A group is lesser-known and doesn’t have much deal flow, you’re better off going to their top-ranked Natural Resources group instead.

Give Me Some Deals, Please

Here’s an example of what the work split might be for a tech company IPO, between the technology industry banker and the ECM banker:

Restructuring is a special case because of the specialized knowledge – industry bankers can’t contribute much there.

At most, the industry bankers may weigh in on the comps, valuation, and potential buyer ideas, but the restructuring/distressed M&A team would do everything else (analyzing bankruptcy scenarios, different capital structures, and running the process itself).

The same applies to Special Situations groups (which often include restructuring/distressed M&A) at banks – since the skills are so specific, you won’t share much work with the industry bankers.

The Hours and Pay

At the analyst and associate levels there isn’t a big difference – the one exception is that you do work less (~12 hours per day) in some ECM groups, especially ones focused on IPOs rather than convertibles.

Otherwise it’s fairly close and deciding which group to join based on hours and pay is borderline insane – you’re in the wrong industry if you’re thinking about where you would get the best lifestyle.

Show Me the Exit Opps!

Ah, here we go: surely the exit opportunities in M&A or Leveraged Finance must trump those in those boring industry groups, right? And if you do ECM or DCM you have no options, right?

You hear this line of reasoning a lot, but no one has ever collected data on where analysts go afterward – so all these discussions are anecdotal at best.

In general, it’s harder to get into PE from a group like ECM because the skill sets don’t overlap and you won’t know enough about LBOs and more complex models to compete.

But the industry group vs. M&A vs. Leveraged Finance distinction isn’t so easy and some industry groups place just as many, if not more, analysts into PE (e.g. the infamous GS TMT).

If you’re hyper-concerned about getting into PE and you have multiple offers lined up, ask the people in those groups where analysts go – that is more accurate than anything you’ll read online, plus it gives you an excuse to work your sell days effectively.

If you want to break into corporate development you definitely have an advantage if you’re in a closely related industry group, and if you want to know how to get into venture capital, it’s good to know something about tech (or healthcare) companies.

It’s hard to say which group is “best” for hedge funds because so much depends on the fund’s strategy – overall there’s less of a preference for specific groups than there is with private equity, the only exception being that ECM usually leads to an investor relations/ECM-type role at hedge funds.

Are Product Groups Going the Way of the Dinosaur?

Some believe that product groups – especially M&A – are redundant and that there’s no reason to keep them around since industry bankers can do everything that product bankers can.

There’s some truth to that if you’re talking about a broad, sell-side auction where there’s nothing unusual about the process – you’re simply showing the company to lots of potential buyers.

But it’s less true when you have a more unusual deal or something that requires specialized expertise (e.g. a cross-border divestiture), so M&A groups won’t be going extinct anytime soon.

And it’s even less true outside M&A: with ECM, DCM, Leveraged Finance, and Restructuring, it wouldn’t be practical to consolidate everything.

If you’re learning a client’s business in-depth, it’s hard to also spend 20 minutes here and there updating market slides, running a debt model for another deal, and so on – there’s a reason division of labor has been around since ancient times.

Overall, the names and reputations of the banks you worked at make more of a difference than the group you were in.

Everyone in the admissions committee knows the difference between bulge bracket banks and 2-person boutiques, but not everyone understands the trade-offs between being an energy banker and an M&A banker.

So don’t gravitate toward M&A just because you think it will get you into HBS or INSEAD.

That’s quite a lot to take in, but I’m sure you have even more questions:

As an intern, the work you do in any of these groups is not much different and you shouldn’t spend too much time stressing about which one is “the best.”

Yes, once in a blue moon half the people in the M&A group will leave and you will get to run models as an intern, but don’t hold your breath waiting for that to happen.

Your group matters mainly because you might end up working there full-time – so if you think you would get bored in ECM, then yes, try for something else.

But if it’s a choice between ECM and not doing banking altogether, um, take the ECM offer.

Wait, So What Do MDs in Product Groups Do?

Great question. If Managing Directors are responsible for winning clients, what would an MD in a product group do on a daily basis? The coverage or industry group brings in the client, so why would you even need MDs in the M&A group?

Usually the product group MD does 1 of 2 things:

Scenario #1 is more common when it’s a large and high-profile deal – a $50 billion merger, for example – or when it’s an unusual transaction that requires specialized knowledge.

For scenario #2, remember that Managing Directors still have tons of contacts in the industry even if they’re only “executing” deals – every time they pitch the company to a new buyer, that’s another name added to their Rolodex.

So the division between product and industry group responsibilities isn’t as straightforward as you might think.

But now you have another question: if, on average, product group MDs don’t bring in as many clients as industry group MDs, do they get paid less?

That makes sense in theory, but it’s impossible to say whether or not that’s actually true in practice because no one has the data.

Managing Directors at bulge bracket banks in developed markets might make a few million USD per year, and their pay is almost 100% correlated to their performance.

An industry group MD who only brings in 1 small deal could easily earn less than a product group MD who executes a dozen deals in 1 year.

These 4 groups are commonly confused – possibly because 3 out of 4 of them have “Finance” or “Financial” in the titles.

Here’s how to think about the differences:

Of these, FIG is the most different and you develop more specialized skills there – it can be hard to go from FIG to working with normal companies because valuing and modeling banks and insurance firms is like learning a different language.

There is a lot of overlap between LevFin, DCM, and Financial Sponsors, and at some banks they are effectively the same group.

Exiting into private equity is common from a LevFin (perfect skill set), but less common from Financial Sponsors (less modeling, but you know lots of PE firms) background, and also less common from DCM since you don’t do as much analysis there.

The hours and pay in these groups are not significantly different at the junior levels, so don’t decide which group to join based on that.

So, Which Group Should You Join?

It doesn’t matter nearly as much as you think it does. Yes, if you are 100% set on PE you probably don’t want to work in ECM – but other than that the differences in work/pay/exit opportunities are exaggerated.

If you’re really interested in a specific industry, go for that industry group – you may have a marginal advantage for certain exit opportunities in other groups, but you also need to maintain your sanity and stay alive for a few years, which are both much easier if you’re interested in the work.

Or you could just go for M&A and Leveraged Finance like everyone else – I won’t judge.