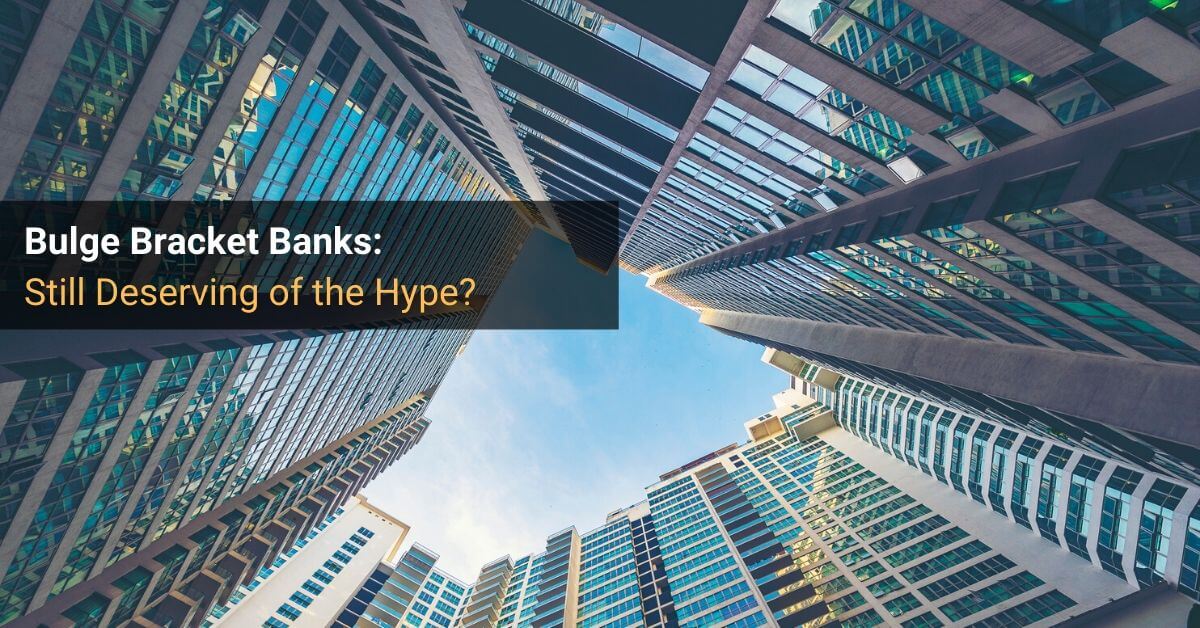 Ah, yes, the bulge bracket banks: another topic where everyone on the internet has copied and pasted the same information into copycat articles.

This article will start with a quick summary of all that, but then we’ll move into the more interesting questions: Are the bulge bracket banks still worth it? Should you focus on winning internships or jobs there?

The “bulge bracket,” or BB, firms are the largest global banks that operate in all regions and offer all services – M&A, equity, debt, and others – to clients.

They tend to work on the biggest deals, usually those above $1 billion USD in size, though they sometimes go below that in certain markets. 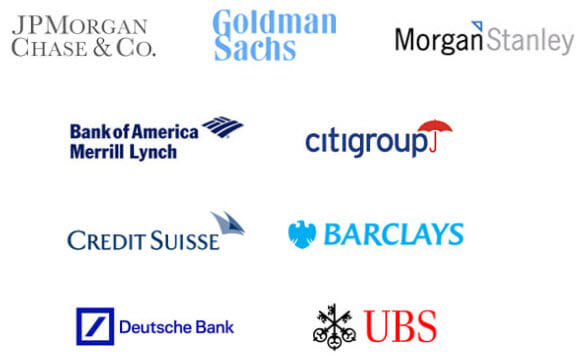 NOTE: Don’t take these “rankings” too seriously; yes, Goldman Sachs is a better bet than UBS, but a job or internship offer at any of these firms is a great result.

Name Origins: What Is A “Bulge Bracket Bank”?

The name comes from the prospectus for a deal, such as an IPO or debt issuance, which lists all the banks underwriting that deal.

The larger banks play more important roles, acting as bookrunners or joint bookrunners, and they earn higher fees as a result.

Therefore, their names are in larger font sizes on the cover page, so they appear to be “bulging out” next to the smaller firms:

The exact group of bulge bracket banks has changed over time.

For example, before 2008, Lehman Brothers and Bear Stearns were both in this group.

But if you’re a university student today, you may not have even heard of them.

If you look at the global league tables on sites like Refinitiv, banks such as Wells Fargo, HSBC, and RBC, as well as various Japanese and Chinese banks (CITIC, China International Capital, Mitsubishi UFJ, Mizuho, etc.) always seem to do well:

They often generate higher fees for specific products, such as syndicated loans, than the “weaker” bulge brackets, like UBS and Deutsche Bank.

And then some of the elite boutique banks, such as Evercore and Lazard, often advise on a higher dollar volume of M&A deals than some of the bulge brackets.

So… what’s the cutoff for a “bulge bracket”? What should we call these other firms?

The short answer is that there’s no universally-agreed-upon cutoff, but most people would say that these firms (Wells, HSBC, RBC, CITIC, Mizuho, etc.) are NOT bulge brackets because they’re not diversified in the same way.

Some of the Chinese and Japanese banks specialize in one product, region, or deal type, as well.

As for Deutsche Bank, despite all its problems, the numbers don’t lie: it still generates $2 billion+ per year in investment banking fees – lower than other BBs, but still in the same general range.

UBS is a trickier case since it now generates lower fees than firms like Wells and RBC, but we’ll still leave it in this grouping for now.

That said, there is clearly a split within this group, with the U.S. banks (JPM, BAML, GS, Citi, and MS) performing better than the European banks (DB, CS, Barclays, and UBS).

That’s why some people have started using “Tier One” and “Tier Two” to describe the banks, but I’m not quite ready to go that far.

For more, see our article on the top investment banks, which outlines the main differences.

In short, these smaller firms tend to work on smaller deals, they’re less diversified in terms of geography and industry focus, and they might specialize in certain deal types.

It also tends to be challenging to move into traditional private equity and hedge funds via the on-cycle recruiting process from these firms.

The exception is the elite boutique category – the banks there are more comparable to bulge brackets across most of these criteria (more on this below).

Why Work at a Bulge Bracket Bank?

You should ask a more important question first: at which banks do you have a realistic chance of winning offers?

For example, if you have a 3.0 GPA at an unknown state school, it is unlikely that you’ll win offers at the bulge bracket banks.

Yes, networking aggressively and starting early with your internships will help, but the odds are still against you, so you shouldn’t target these firms exclusively.

If you do have a competitive profile – see the how to get into investment banking guide for the details – then many people argue that the bulge bracket banks offer the following advantages:

Well… not so fast.

The problem is that the bulge brackets have a new, leaner competitor: the elite boutique banks (EBs).

Many of these points are valid for the comparison to middle market and regional boutique banks but don’t hold up nearly as well for the elite boutiques.

Why Not Work at One of the Big Banks?

First off, you will probably not get better deal experience if you work at a bulge bracket rather than an elite boutique.

Both types of firms work on relatively large, complex deals, but team sizes are smaller at elite boutiques, so junior bankers get more client exposure and more “real work.”

Second, while the exit opportunities at a bulge bracket are better than those at a regional boutique or middle-market firm, the same is not necessarily true vs. the elite boutiques.

It’s just as plausible to get into private equity and hedge funds from the EBs; you’re at a disadvantage only if you want to work at a normal, non-finance company.

The total compensation numbers may be lower, but this 100% cash bonus makes a big difference because turnover in IB – at all levels – is extremely high.

So, that leaves the bulge brackets with two main advantages over elite boutiques: the brand name and alumni network.

These factors matter, but more so if you’re planning to leave the finance industry.

Also, I think the “alumni network” factor is a bit overrated; in practice, so many people work at these firms that you’re not going to stand out too much by saying you worked at Large Bank X.

If want to stay in IB long term or move into private equity or hedge funds, I can’t think of a great reason to accept a BB offer over an EB offer other than vague “optionality.”

A Day in the Life at the Biggest Banks

If we compare these to what you might experience at a middle market or regional boutique firm, the main differences are:

In short, you’ll have a bad life for a few years if you join a bulge bracket bank, with long hours, lots of emergencies, and a high volume of deals and pitches (with some exceptions, such as the ECM group).

Overall, it’s much tougher to make the case today (2020) that the bulge brackets are “the best banks” in all situations.

Even the term “bulge bracket” may be outdated because U.S. and European banks have diverged significantly following the 2008-2009 financial crisis.

Still, people keep searching for this term and asking about it, so here’s a quick summary of the pros and cons:

Advantages of Working in Investment Banking at the Bulge Bracket Banks:

Disadvantages of Working in Investment Banking at the Bulge Bracket Banks:

I’d sum it up by saying that if you’re not sure what you want to do in the future, and you have a legitimate shot at the bulge brackets, yes, go for it.

But if you’re sure you want to stay in finance for the long term, then the elite boutiques present a very compelling alternative.

And if you’re not competitive for either one of these, start looking into other banks.