The Investment Banking Managing Director: King of the Jungle, or Tragic Hero? 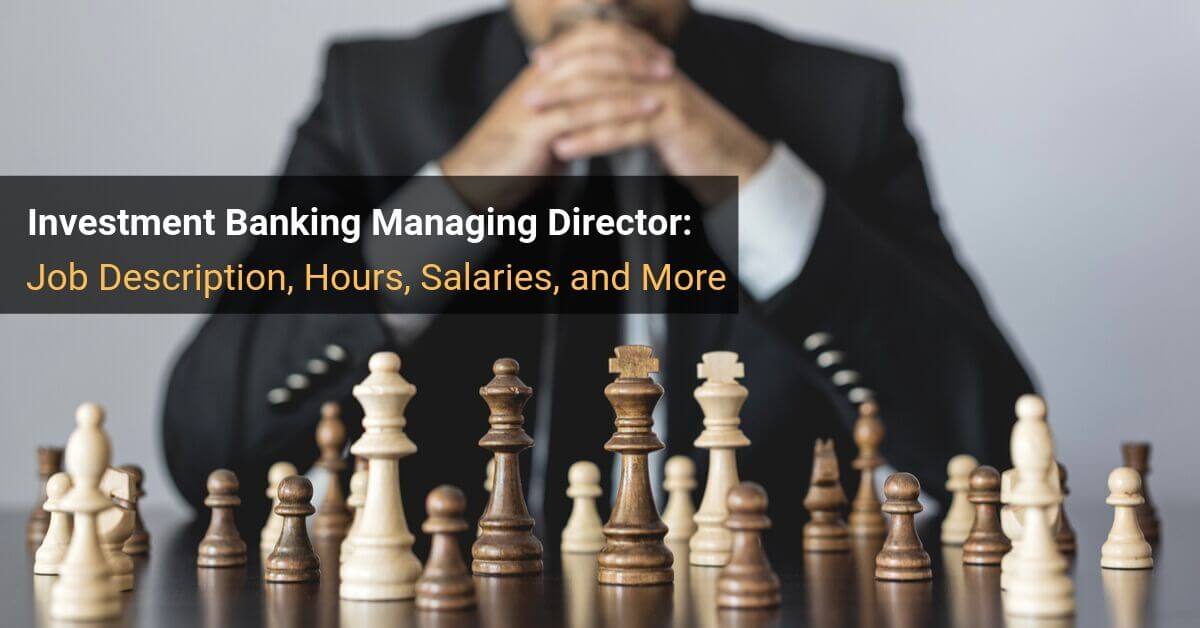 “Then happy low, lie down! / Uneasy lies the head that wears a crown.”

When you think about the investment banking Managing Director, your first thought may be a gorilla swinging through the jungle, devouring food and crushing the Analyst monkeys.

But if you want a more accurate view of the role, you should think about Henry IV’s state of mind from the soliloquy above.

Having deposed the former king, Richard II, he now faces betrayal from the same noble families that initially supported his claim to the throne.

Confronted with rebelling Welsh, Scots, and Englishmen, plus the French to the south, Henry is so stressed that he can no longer sleep at night.

He then realizes the great irony: thousands of his poorest subjects can fall asleep, while “nature’s soft nurse” continues to elude him.

And that’s an apt summary of the Managing Director job in investment banking: yes, you’re “the King,” but you may not get much sleep at night.

Managing Directors have one goal: to make it rain.

They spend their time winning deals and clients, meeting companies, and developing relationships, and they’re frequently on the road doing that.

They are responsible for winning most of the M&A, capital markets, and restructuring deals a bank executes – so, they are also responsible for most of its investment banking revenue.

Sometimes MDs get involved in deal marketing and negotiations, especially for high-profile clients that require special finesse, but they spend far less time on project management than VPs.

An MD’s average day is filled with tasks such as:

Notice how 4 out of 5 of these bullets start with the word “meeting.”

That’s intentional because an MD’s life is a series of meetings.

It would be exceptionally rare for an MD to jump into Excel, Word, or PowerPoint to create documents, but they may make minor edits occasionally.

MDs still check and review deliverables, but only after the Associates and VPs have already done the initial checks.

As described in the article on the Vice President role, MDs have more autonomy than VPs and spend less time on execution, such as revisions of pitch books and CIMs.

It’s hard to say whether the job is more or less difficult than a VP’s job, but it is a narrower one.

If you’re not great at multitasking, but you’re very good at doing one thing over and over again, you might do well as an MD – even if your VP job was a struggle.

On the other hand, if you think being a full-time networker and relationship manager is boring, then you should stay far away from this role.

On paper, Managing Directors have the best hours of any banker, with a likely range of 50-60 hours per week.

Just one small problem: those hours also include travel, and there’s a lot of it at this level.

The percentage depends on the bank size, the group (industry vs. product), and the office location, but it’s not unusual for bankers at this level to be on the road 50% of the time.

On the lower end, a product group MD that manages existing relationships and who is also in a big financial center might travel only 20-30% of the time.

But just like consultants, MDs also return home on weekends, so it’s plausible to have a family/social life at this level.

Why Would You Want to Become an MD?

Nearly all MDs are promoted internally, from the ranks of Senior Vice Presidents (SVPs) or Executive Directors (EDs) at the bank.

So, if you’re in a position to become an MD, you should already know that there is only one good reason to go for it: because you want to make a long-term career out of investment banking and stay in the role for at least 10 years.

In reality, most MDs do not even make it to the 2-year mark because of the enormous pressure to generate revenue, and only a small percentage of those who start as Analysts make it to the MD level (5-10%?).

So, you have to ask yourself if the potential payout – earning millions of dollars per year – is worth the pressure and the high chance of failure.

If you’re the rare person who gets hired as an MD as an outsider, then you need to figure out the nature of the role because these jobs may have somewhat different responsibilities (e.g., Rahm Emanuel’s stints in investment banking).

Base salaries are in the mid-six-figure range, with total compensation in the high six figures to low seven figures.

An MD doing decently should earn at least $1 million per year, and sometimes a low multiple of that; the average range is probably $1 – $3 million.

A normal MD is unlikely to earn $10 or $20 million in a normal year; they would need to be even more senior (e.g., Group Head) for that to be plausible.

At the bulge-bracket banks, a significant percentage of an MD’s compensation is deferred or paid in stock.

That’s why it doesn’t make sense to stay in the role for only 1-2 years – you might lose out on the majority of your bonus(es).

A Day in the Life: What Does a Managing Director Do?

To illustrate this one, we’ll use the same day as in the Analyst, Associate, and VP articles, but change the perspective to the Managing Director instead:

8:00 AM – 9:00 AM: Do an internal conference call with MDs in other offices to review the group’s overall pipeline and some potential new deals.

In theory, everyone is supposed to weigh in and informally “approve” deals; in practice, fees trump everything.

You’re skeptical of one of the newer MDs who’s presenting high-fee-potential-but-also-highly-unlikely deals.

9:00 AM – 10:30 AM: You read a few emails from contacts at venture capital firms, and they’re suggesting that you meet with a few of their newer portfolio companies.

You read up on a recent industry conference, cross-reference it with their suggestions, and then have your assistant request meetings, following this soft introduction.

10:30 AM – 11:30 AM: You invite a promising VP to join you for a pitch about a bolt-on acquisition for a private equity firm’s portfolio company.

The PE firm is skeptical of this company’s merits, but you know they desperately need to turn this portfolio company’s fortunes around, so you persist.

11:30 AM – 2:00 PM: You head to lunch with the CEO of a client company that previously hired your bank to run acquisitions for it.

It’s supposed to be a short, 1-hour meeting with 30 minutes of transportation time, but this CEO keeps going on tangents and talking about his personal life, and you have to indulge him – at least if you want the potential for $20 million in fees in a few years.

2:00 PM – 3:30 PM: Back at the office, you conduct a series of calls with clients that are considering convertible bond issuances this year.

Low prevailing interest rates mean that investment-grade companies can issue zero-coupon bonds in many cases, which is quite appealing, so you make brief pitches and leave a few voicemails.

3:30 PM – 4:30 PM: The negotiations to finalize the Definitive Agreement in a fairly important M&A deal are about to fall through.

The buyer wants a 3% termination fee, while the seller is willing to accept only a 2% fee, so this shouldn’t be that difficult… but you make little progress this time around.

4:30 PM – 5:30 PM: You conduct a job interview with an MD from another bank that your office is trying to poach.

He could boost the office’s fee revenue by at least 10%, but he’s also demanding significantly higher compensation than any of the current MDs, so it’s “wait and see” for now.

Some have performed well in their first few months, but 1-2 of the Analysts and Associates seem unengaged and error-prone so far.

He’s clearly bored by these complaints, but you’re the senior banker who determines his bonus, so he has to stay and listen.

Then you strategize with him about a few other deals and head home.

This day may not seem “difficult,” and in some sense, it’s not: you didn’t have to perform open-heart surgery or rescue children from a burning building.

But the payoff from most of these tasks is unknown, and it often happens far into the future.

That said, you can’t just wait around for 5-10 years to get results with everything; you need evidence of potential fee revenue in the next 1-2 years if you want to stay employed.

How to Get Promoted to Managing Director at a Bank

As with VP-level promotions, technical skills do not matter at all.

What matters is your ability to get companies to sign on the line that is dotted.

If you’re bringing in deals and generating the required fee income as an ED or SVP, then you should have a good idea of whether or not you’ll be promoted.

The tricky part, though, is that the promotion process is not 100% based on your performance.

At most banks, existing MDs survey other senior bankers at the firm and ask everyone for their opinions of you.

Therefore, you need to make yourself “known” to people in positions of power elsewhere, and you need to avoid negative stories and hearsay at all costs.

Even if you perform well, you won’t get promoted if the most senior executives dislike your style, or if you caused some controversy (real or imagined) in previous years.

The Investment Banking Managing Director Job: Right for You?

As usual, this is the wrong question to ask because no one “chooses” to become an MD.

You start in IB, work your way up, and then stay in the field, switch firms, or switch industries.

It is impossible to know in advance how good you’ll be because the MD job does not use a common, everyday skill set.

So, my answer goes back to the point above: only take the job if you’re in it for the long-haul, ideally 10+ years.

It takes a long time to see a payoff from all the relationship building, office politicking, and deals that go nowhere – plus, you’ll give up significant deferred compensation if you leave early.

The biggest mistake we see is that students and career changers tend to think about the Managing Director job, and the investment banking career path in general, in terms of “hours and lifestyle.”

The problem here is that hours and lifestyle are useful metrics only for similar, entry-level jobs.

The nature of the investment banking Managing Director job and the sources of stress are so completely different that it’s ridiculous to view it through a $ per hour lens.

And you won’t pull all-nighters at this level – but that doesn’t mean you’ll be able to sleep easily, either.

Uneasy lies the head that wears a crown.