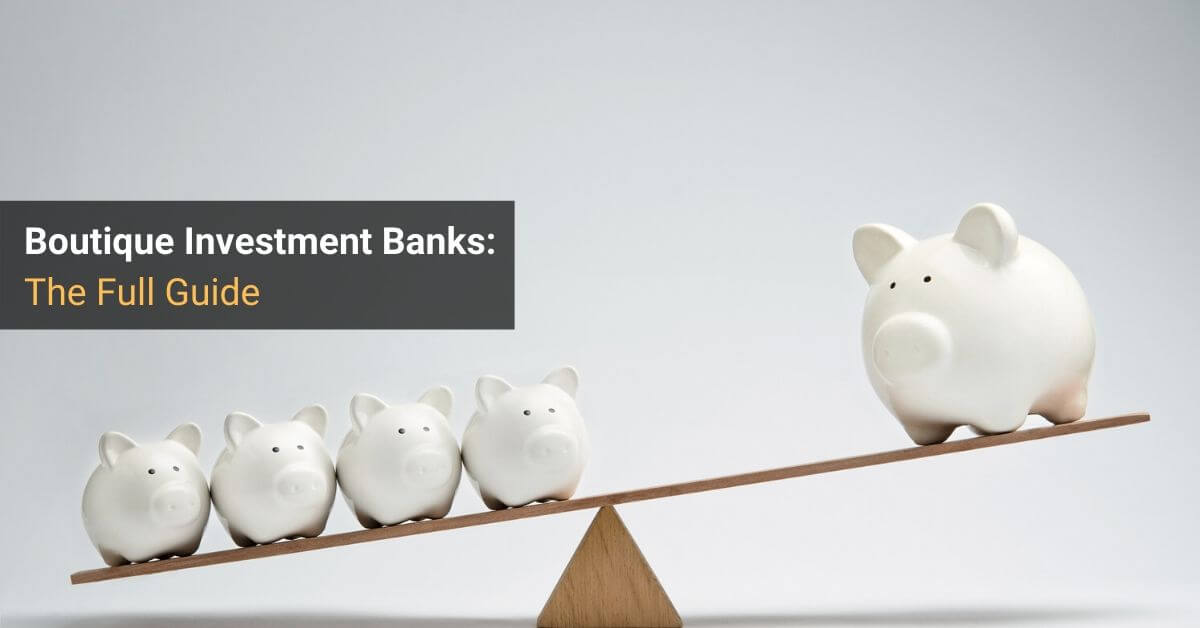 When it comes to boutique investment banks, there’s so much confusion online that I don’t know where to start.

But it’s logical to address the most serious problem first – namely, that there are four major categories of “boutique banks,” and they are each quite different:

Each category is so different that I could write an entire article about each one.

But hardly anyone searches for “industry-specific boutiques,” so I’m going to cover the final three categories here.

Boutique investment banks advise on “smaller deals,” often in the $50 – $100 million range or below, and they usually focus on one specific product, geography, or industry; exit opportunities are more limited as well.

In practice, most boutique investment banks focus on M&A Advisory or Restructuring because it’s difficult to compete in areas like ECM and DCM without much bigger teams.

There are hundreds or thousands of banks worldwide that qualify as “boutiques,” so I can’t possibly list everything. But here are a few examples by category: 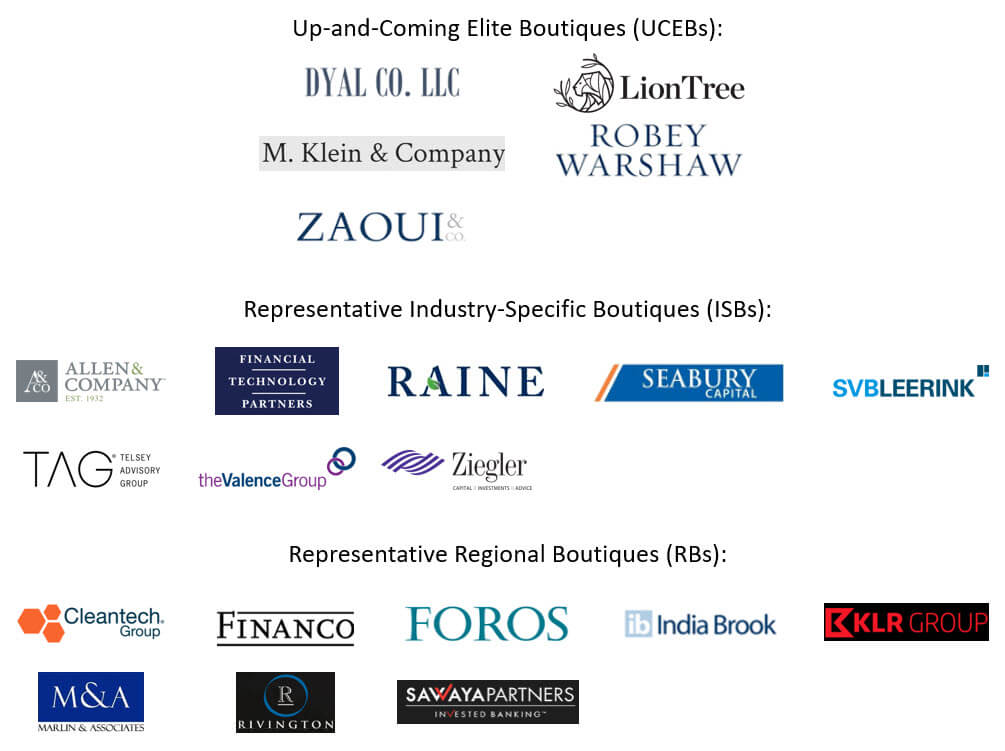 What is a “Boutique Investment Bank”?

Definition: A boutique investment bank is a non-full-service firm that focuses on M&A Advisory or Restructuring, rather than capital markets, and that advises on deals that are significantly smaller ($50 – $100 million range or less) than those of bulge bracket or middle market banks; these deals are often concentrated in one industry or geography.

This definition refers primarily to Regional Boutiques (RBs) and some Industry-Specific Boutiques (ISBs).

Elite boutiques (EBs) are a completely different story because they advise on much bigger deals, and Analysts from EBs have much better exit opportunities.

Up-and-coming elite boutiques (UCEBs) also do not fit this definition because they often work on much bigger deals.

However, they are similar to RBs and ISBs in terms of headcount, geographic reach, and industry concentration – and it’s not clear how solid the exit opportunities are.

When in doubt, remember that size matters. If a bank consistently works on deals below $100 million, it’s a boutique, no matter how they try to spin it.

It should be easy to tell apart boutique investment banks from the bulge brackets: size, size, and size.

But things get murkier when you compare boutiques, elite boutiques, and middle market banks.

Here’s how you can tell them apart:

Here are a few examples:

SVB Leerink is a well-known healthcare-focused bank. It does more than just M&A, but most of its deals are under $100 million or “undisclosed.” It only does healthcare, and it has 4 locations and ~200 employees, so we’d say it’s an industry-specific boutique.

LionTree Advisors often works on multi-billion-dollar deals, so you can immediately tell it’s an EB or UCEB. It only does M&A, it focuses strictly on TMT investment banking, it has 4 offices, and it has fewer than 200 employees, so it’s an up-and-coming elite boutique.

Aethlon Capital in Minneapolis has all “undisclosed” deal sizes, indicating the deals are small, it only does M&A and private placements, it has just 1 location, and it has fewer than 10 employees, so it’s a regional boutique.

Ranking these firms is close to impossible, given that there are thousands of them with very limited data, so I’ll cover the major differences by category instead:

These firms are often founded by senior bankers from EB or BB banks who take a few big clients with them and establish a niche within an industry – even with very small teams.

For example, Robey Warshaw has fewer than 20 employees, but it has advised on M&A deals worth tens of billions of dollars, including Comcast’s acquisition of Sky.

This explains why you sometimes see these firms on the league tables, comparing favorably with BB and EB banks in terms of deal values: 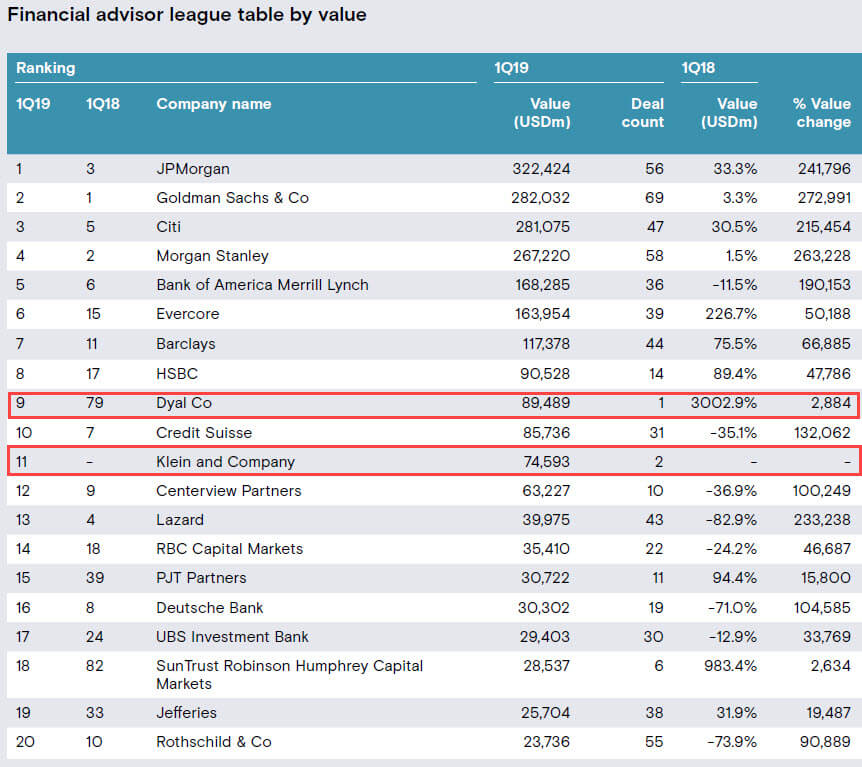 In theory, these firms sound great: you still work on large and complex deals, but you’re on a small team, so you get massive deal exposure.

In practice, there are two problems with that:

The ISBs are often closer to middle market banks because they tend to work on larger deals, they may have a few offices, and Analysts have somewhat-better exit opportunities.

But they’re still less diversified than MM banks, and their average deal is far smaller than the average at EB and BB banks.

Industry-specific boutiques are often attractive acquisition targets because they allow larger banks to scale or make up for weaknesses.

For example, Cain Brothers was a well-known ISB in the healthcare sector until KeyBanc acquired it in 2017.

And KBW (Keefe, Bruyette & Woods) was a top ISB in financial services until Stifel acquired it in 2013.

You could make the case that ISBs are closer to MM banks, but they still suffer from some of the same problems as the UCEBs: highly variable culture/hours/lifestyle and unclear exit opportunities.

For example, FT Partners “some of the banks above” are known for old-school banking cultures where Analysts work… a lot, more than even at BB banks.

Yes, they get great deal experience, but their exit opportunities are not commensurate with their hours worked.

These firms have anywhere from ~5 to ~50 employees, with 1-2 offices, and they advise on smaller deals (usually under $50 million).

You could arguably call some of these firms “industry-specific boutiques” instead; it’s hard to tell because few disclose deal sizes.

Often, these firms are founded by veteran bankers from larger firms who want more independence, so the culture, hours, and lifestyle vary widely.

For example, I once interviewed a reader who interned at a regional boutique bank where:

Some regional boutiques are closer to MM, EB, or BB firms in terms of hours and lifestyle, so this example is not representative of the entire category.

However, it is fair to say that the average hours are lower at true regional boutique banks, often in the ranges of 60-70 or 50-60 hours per week.

You will probably get more exposure to deal processes at these smaller firms, but there are two big disadvantages:

Why Work at a Boutique Investment Bank?

Boutique banks tend to be good for entry-level candidates, such as:

Recruiting is less competitive, and you can often win interviews and offers with aggressive cold calling and cold emailing.

Boutiques can also be good for senior bankers who are tired of working at big, bureaucratic firms, and who want a better lifestyle and more independence.

However, they’re not so good for people in the middle (Associates, VPs, and Directors) because many boutiques are thinly staffed and don’t necessarily offer a pathway to the top.

Why Not Work at a Boutique Investment Bank?

Deals are smaller and simpler, the firms are not well-known, and cash compensation is lower – especially at regional boutiques.

The experience is even more variable than working at an MM or EB bank, and the exit opportunities range from “unclear” to “limited.”

Advantages of Working in Investment Banking at a Boutique Bank:

The list of advantages and disadvantages is very similar to the list for middle market banks, but even more extreme:

Disadvantages of Working in Investment Banking at a Boutique Bank:

Are Boutique Banks for You?

The merits of boutique banks depend on your options.

If it’s a boutique bank vs. something outside IB/PE, such as a Big 4 firm or corporate finance at a mid-sized company, take the boutique offer.

If you end up cold-calling companies all day, move to another bank.

In most cases, MM banks beat boutique banks, and EB/BB banks beat MM banks, but there are always exceptions.

ISBs and MMs are sometimes a tougher call, and if you want to focus on a specific industry over the long term, an ISB might be a better bet.

And I’m not sure what to make of the UCEBs yet; there’s too little data on exit opportunities and long-term career outcomes.

But if you’ve read all the articles in this series, your own decision shouldn’t be tough to make – once you’ve sorted through all the online confusion.