The Elite Boutique Investment Banks: The Rising Upstarts That Disrupted the Old Guard? 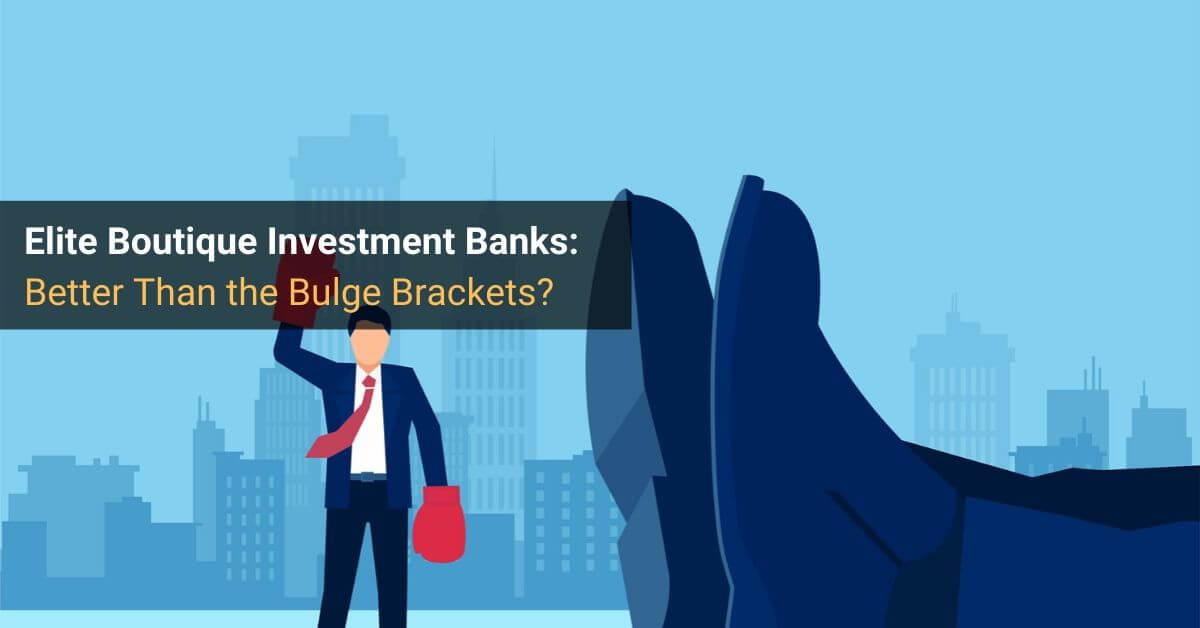 If you received a job offer at Goldman Sachs or Morgan Stanley, would you be crazy to turn it down?

For many years, the answer would have been “yes” – especially if you turned it down to work at a smaller bank.

But in the aftermath of the 2008 financial crisis, that began to change.

Big tech companies and startups weren’t pulling students away – not yet, anyway – but rather other investment banks.

These firms were smaller, they ran leaner deal teams, and they focused on M&A and Restructuring, often advising on the same deals as the bulge brackets.

And they came to be known as the elite boutique investment banks (EBs). 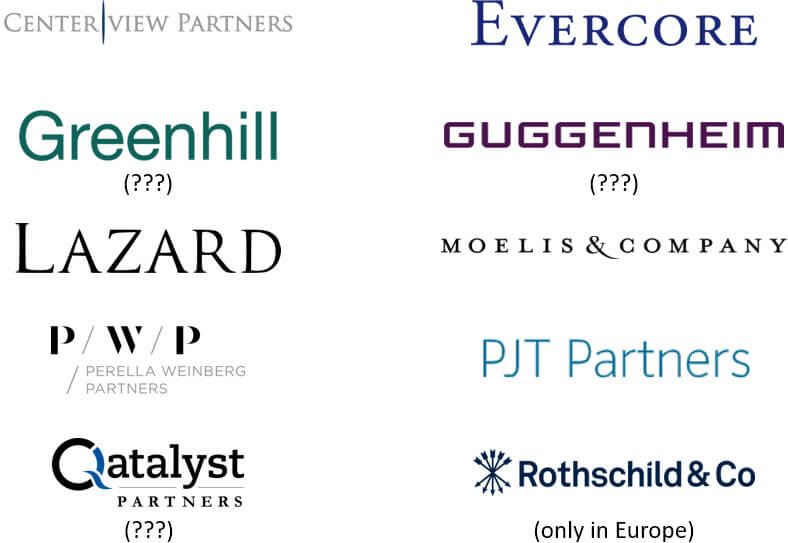 What Is An Elite Boutique Investment Bank?

Definition: An elite boutique investment bank (EB) is a non-full-service firm that focuses on M&A Advisory or Restructuring, rather than capital markets, and that advises on the same types and sizes of deals as the bulge bracket banks – often with an industry or geographic specialty.

The name came from the fact that the EBs often advise on deals that are as big as the ones the bulge brackets work on (e.g., over $1 billion USD up to the tens of billions USD).

They “punch above their weight class,” so they’re labeled “elite.”

Also, the elite boutiques often focus on specific industries or regions and may not have the same strength elsewhere.

In an interview, it might sound a little weird if you say “elite boutique” aloud, so you should probably refer to them as “independents” or “independent investment banks.”

Wait, What About the Rankings? Rank the Banks!

I’m deliberately not ranking these firms or creating my own Elite Boutique Investment Bank League Table for a few reasons.

First, the volatility is quite high. Some of the elite boutiques advise on similar dollar volumes of M&A deals as the bulge brackets, but they tend to advise on fewer total deals:

As a result, a big deal for one firm in one year can significantly shift the rankings.

For example, the M&A and Restructuring groups at these firms are often viewed as “the best” teams, with standard industry groups not faring as well.

By contrast, a strong industry group at a bulge bracket bank isn’t much different from a strong M&A team at the same bank (see: product groups vs. industry groups).

Finally, there’s some controversy over which banks qualify as “elite boutiques” (see below).

What About Allen & Co.? LionTree? Should Qatalyst, Guggenheim, and Greenhill Be There?

The short answer to all these questions is maybe, maybe not.

Looking at the M&A league table data over the past 5-10 years, the elite boutique firms that most consistently place in the top ~10 worldwide are Evercore, Lazard, and Centerview.

After those, Rothschild (mostly due to Europe) is also quite consistent.

And then things get very random.

For example, in some years, newer firms like Moelis and Qatalyst have placed higher than some of the bulge brackets, while in other years, they did not make the top 20.

Firms such as Greenhill and Perella Weinberg rarely rank well by total deal volume, even if they advise on individual deals that are quite large.

However, I will make three quick comments about the classifications/rankings:

Before you leave an angry comment wondering why your bank was not included, I’ll reiterate that this list is subjective and likely to change in the future.

Outside of Evercore, Lazard, and Centerview, you could make a case against any of the others on this list counting as “elite boutiques,” and you could also argue for the inclusion of other banks not on this list.

For the full set of differences, please see our article on the top investment banks.

In short, the elite boutiques tend to work on larger deals than middle market firms and regional boutiques, with transaction values often above $1 billion USD.

They often compete with and advise alongside the bulge brackets on deals in that size range.

It’s also easier to use the on-cycle recruiting process to move into private equity or hedge funds coming from an EB since headhunters will contact you directly.

Unlike the bulge brackets, the elite boutiques do not do much equity/debt financing work, and they are not well-known outside the finance industry.

Why Work at an Elite Boutique Investment Bank?

Assuming that you have a competitive profile for elite boutique and bulge bracket banks – more on that here – then many people argue that EBs offer the following advantages:

These are the typical claims – but how well do they stack up to reality?

Why Not Work at an Elite Boutique Investment Bank?

First, there are the obvious downsides: the elite boutiques are not well-known outside the finance industry, so your exit opportunities to normal companies, startups, government roles, etc. will be reduced.

Also, you won’t get an “alumni network” of the same depth or breadth that you would at a BB bank.

Then there are some less obvious downsides that people tend to gloss over.

Yes, the EBs do advise on some mega-deals, but they also advise on plenty of smaller, less significant deals as well – take a look at any of these banks’ “Recent Transactions” pages to see.

Another issue is that the experience at elite boutiques is highly variable – more so than it is at the larger banks.

If you’re working in M&A or Restructuring at Evercore in New York, sure, you’ll probably get a great experience with solid exit opportunities.

But if you’re in a smaller industry group at one of the “borderline” EBs in a regional office, anything could happen.

Some of the newer EBs are also dependent on key people, and deal flow tends to suffer when these people retire or get poached.

Finally, the elite boutiques don’t hire that many people each year – altogether, they might make a few hundred front-office entry-level hires worldwide, while the bulge brackets hire in the thousands.

So, even if your ultimate goal is an elite boutique, it’s not a great idea to focus on them exclusively.

Will EBs Take Over the World?

If you’re extremely certain you want to stay in finance long-term, and you’re a competitive candidate for EB/BB banks, then the elite boutiques might seem like the best option.

The most credible argument against them is that there are significant differences between individual banks at this level, and an offer from a “lesser” or newer firm might be worse than one from a large bank.

Advantages of Working in Investment Banking at the Elite Boutiques:

Disadvantages of Working in Investment Banking at the Elite Boutiques:

My advice here is “Buyer beware.”

Yes, you could certainly make a strong case for accepting an offer at one of the top EBs over one at a BB bank.

But as you go down the list and move outside of NYC / London, the rationale gets murkier.

The elite boutiques do offer many benefits, but I’m not quite as “sold” on them as many people online are.

And if you’re competitive for neither bulge brackets nor elite boutiques, the good news is you won’t have to make this tough decision at all – just get started networking elsewhere.