The Investment Banking Vice President: The Toughest Job at a Bank? 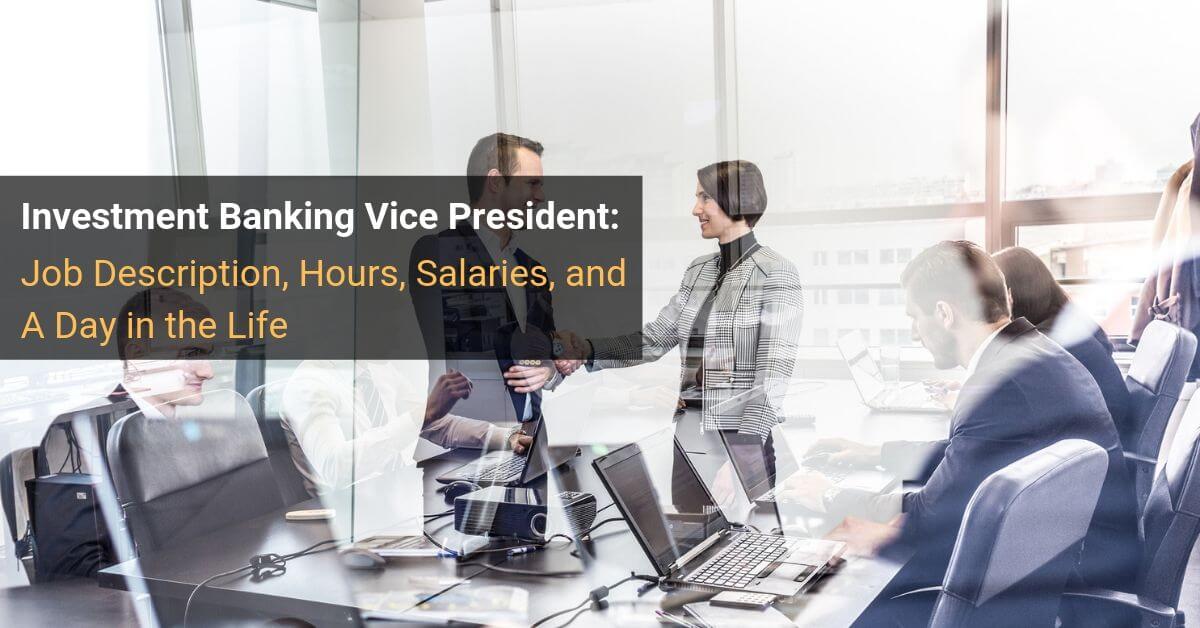 If you’ve ever wondered about the “investment banking vice president (VP)” role, congratulations: so has the rest of the internet.

The Vice President’s job is tougher to define than the Analyst and Associate roles.

And to make things even more confusing, seemingly everyone at banks has the “Vice President” title (hint: it means a lot at a normal company, but little at a bank).

Here, we’ll focus on what to expect in traditional investment banking teams, how VPs differ from Associates and Managing Directors, and a day in the life of a VP:

The Vice President is the “project manager” at a bank.

Unlike Associates and Analysts, the VP does not get into the weeds of Excel models and PowerPoint pitch books, but instead spends time on tasks such as:

Just as Associates tend to spend more time “checking” and less time “doing,” the same applies to VPs, but even more strongly.

Occasionally, a VP will still jump into Excel or edit a presentation, but usually only for important deals or pitches.

If you’re at a regional boutique or another, smaller bank, then the VP and Associate roles may be very similar.

Depending on the firm, VPs might even have to source new deals by cold calling and dialing for dollars – which would not happen at larger banks.

The main differences between a VP and an MD are:

The average is probably 55-70 hours per week, which translates into 12-hour days in the office on weekdays, followed by a bit of extra work from home.

It’s more feasible to have a family life or hobby at this level, but you’re still likely to stay late at the office when important deals heat up or a major pitch is due.

You will also have to travel morel, both to meet with existing clients and to meet new ones and pitch for deals.

Why Would You Want to Become a Vice President?

You could cite “the money,” or “wanting to work on exciting deals,” but there is only one reason that you’d want to become a VP in investment banking:

Because you want to make a long-term career out of investment banking and advance to the Managing Director position eventually.

You can’t “be hired” as a Vice President: in 99% of cases, you need to start as an Analyst or Associate and work your way up the ladder.

In some rare cases, yes, a bank might hire a VP out of a corporate development role at a normal company, or something similar, but these are very rare cases.

So, you need to ask yourself if investment banking is your long-term career goal before you accept a VP promotion.

If not, it’s not that great a job because you’re “stuck in the middle” without the autonomy of an MD or the options and exit opportunities of Analysts and Associates.

However, a significant portion of your compensation will be deferred or paid in stock at this level, at least at large banks.

The vesting period varies, and some banks might offer a 3-year cliff for the entire amount, while others will grant partial vesting, such as 20% or 33% per year.

Initially, only the bulge brackets did this, but now it’s common at the elite boutique banks as well.

The bottom line is that the longer you stay in the position, the tighter your “golden handcuffs” become.

If you’re waiting to earn hundreds of thousands of dollars, it gets very difficult to leave voluntarily.

And even if you’re at a smaller bank that offers 100% cash compensation, you’ll always be thinking, “Hmm… can I afford to leave and take a big pay cut?”

A Day in the Life: What Does an Investment Banking Vice President Do?

To illustrate the life of a VP, let’s take a look at the same day that we used in the Analyst and Associate articles, but change the point of view:

8:30 AM – 10:30 AM: You arrive at the office and discuss an M&A pitch book with an Associate. One of the new Analysts seems to be screwing around all the time, so you grill the Associate on this Analyst’s competence.

10:30 AM – 11:30 AM: You join a quick call with your Managing Director, who’s pitching a bolt-on acquisition to a private equity firm. Your job is to listen, learn, and answer any questions that come up.

Afterward, the MD tells you about an upcoming leveraged buyout pitch and describes the ~200 slides he wants in the next few days.

You start thinking about how you can reduce it to a 50-slide presentation.

11:30 AM – 12:30 PM: The CFO of a client company calls you to complain about several inaccuracies in a management presentation for an upcoming roadshow.

He claims that the financial projections are “off,” and that your Analyst screwed up.

But the truth is, this guy kept changing his mind and sent over 17 different sets of projections. So, you apologize profusely, but you do not inform your Analyst of the CFO’s temper tantrum.

12:30 PM – 1:30 PM: You have lunch with the VP of Business Development at a promising new startup. You chat about business and casually suggest meeting with the CEO in the future.

You have to start building that Rolodex, separately from your MD.

Your MD made the initial outreach to these buyers since he has the relationships, but it’s your job to follow up, answer their questions, and continue to pitch your client.

Some of them raise concerns about your client’s churn rate and revenue concentration, so you ask the Associate to find data to counter these concerns.

4:00 PM – 5:30 PM: An Analyst and Associate come into your office to review a pitch book they’re working on for an upcoming recapitalization deal.

You can tell that they’ve been arguing about the presentation, so you take extra time to divide their tasks clearly by assigning specific slide numbers to each one.

5:30 PM – 7:00 PM: You get summoned to a meeting with the Head MD in the office, the staffer, and the Associate from this morning to discuss the new class of hires.

The Associate seems overly positive about a few of the MBA recruits, so you question him intensively and go through your full list of notes and impressions of each person.

7:00 PM – 7:30 PM: The MD from this morning asks you about that leveraged buyout pitch he described. You explain that it’s “coming along,” while downplaying expectations and dropping hints that his original version is too long.

Then, the MD starts venting about one CEO who can’t decide whether or not the company seriously wants to sell, so you listen and pretend to be interested.

7:30 PM – 8:30 PM: You review another turn of the M&A pitch book with the Associate from this morning, and then you speak with an Analyst about revising the projections for the CFO who sent 17 different versions.

You go home, but you might have to log in remotely later on and respond to emails or review more presentations.

This was a ~12-hour day, which is reasonable for a normal weekday without huge emergencies.

As mentioned above, you rarely, if ever, “get hired” as a VP.

Instead, you start as an Analyst or Associate and get promoted by performing well and proving that you can work well with clients.

Most banks will promote you to VP only if they believe you’re capable of eventually becoming an MD.

Otherwise, they’re not going to waste $500K+ per year on someone who can execute deals but who can’t eventually generate business for the firm.

That’s why “Vice President” is arguably the trickiest job in investment banking: you split your time between managing Analysts and Associates, pleasing MDs, and responding to existing clients, but you also have to start building new relationships with executives.

We cover some of the qualities required for advancement in the article on investment banking promotions, but the short version is that you need solid evidence of working well with clients to advance – Excel and PowerPoint skills mean little at this stage.

If you’re currently a VP and you interview for VP-level roles at other banks, they’ll mostly ask about your deal experience.

No one’s going to give you an Excel test or ask accounting questions at this level because you’re more of a project manager and MD-in-training.

The Vice President Job: Right for You?

As with the IB Associate role, the real question is not, “Is the VP job right for you?”

The real questions are:

A VP might work fewer hours than an Analyst or Associate, but it’s a tougher job that requires a delicate balancing act between technical skills, managerial skills, and office politics survival.

If you’re not certain that you want to do IB in the long term, you should hit the “eject” button before you reach the VP level.

Otherwise, the golden handcuffs are very real, and they might keep you in a job you dislike – as you wait for that deferred compensation.

Attrition is also higher than you’d expect at this level – many people decide that the money isn’t worth the constant stress and long hours.

If you leave, you could go to another bank or win roles in corporate finance, corporate development, or corporate strategy.

However, you don’t have a great shot at buy-side roles in private equity or hedge funds unless you go to a smaller firm and accept a “demotion.”

There are also big differences in the VP role at bulge brackets, elite boutiques, middle market banks, industry-specific boutiques, and regional boutiques – in terms of work, lifestyle, compensation, and promotions.

These points don’t make the VP role a bad one, but they do make it tricky to define and assess.

If you want to be a banker for life, the VP position is a painful but necessary part of the investment banking career path – sort of like a hazing ritual in a fraternity.

But if you’re not sure of your long-term goals, spare yourself the pain and suffering and exit the industry before the hazing begins.