Merchant Banking: The Most Overlooked Group in Finance? 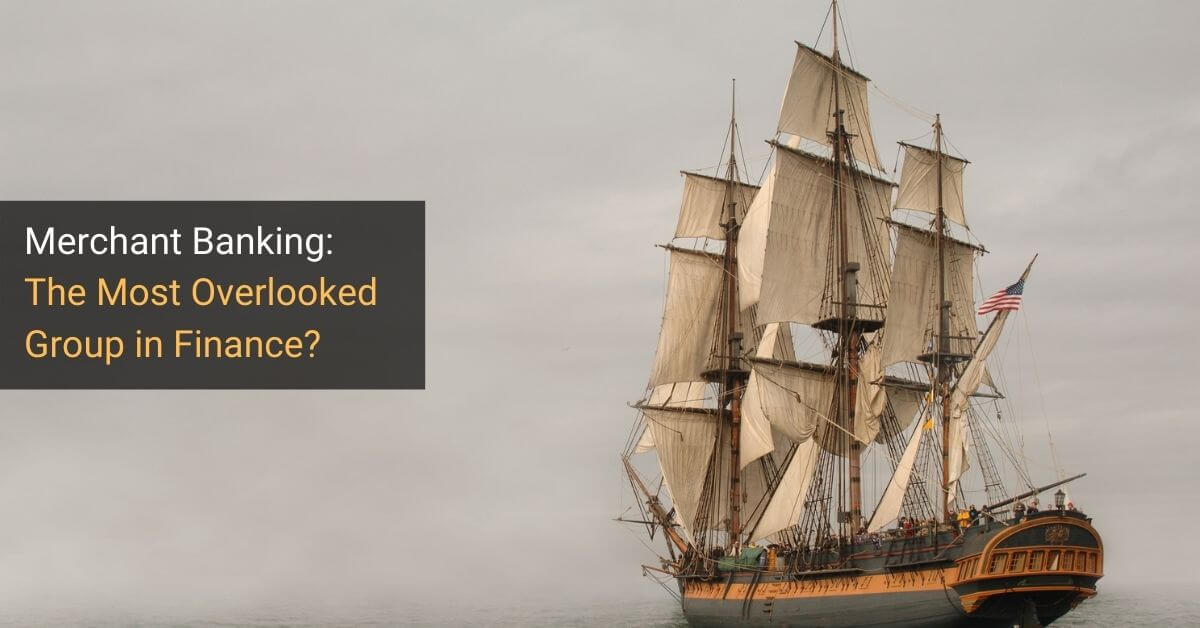 Ask the average undergrad or MBA student at a top school where they want to work, and frequent answers will be “investment banking” and “private equity” – but merchant banking rarely comes up.

And that’s odd because merchant banking (MB) is a combination of those two other industries.

It’s fair to say that MB is one of the most overlooked opportunities in finance.

Part of that’s due to confusion about the name, and part of that’s because of business model changes at the large banks:

Definitions: What is “Merchant Banking”?

Merchant banks started in the Middle Ages as a way to finance Italian grain and cloth merchants.

Over time, “merchant bank” became a synonym for “investment bank” in the U.K., but the terms now describe separate entities.

Partially because of this confusing history, a merchant bank today could mean any of the following:

If the “merchant banking” group is a separate, private equity-oriented division, it’s quite similar to private equity anywhere else.

But if the group is integrated with the normal advisory work the bank does, it’s more like “investment banking with bonus content.”

“But wait,” you say, “If merchant banking is a cross between IB and PE, why is it not discussed as widely? Why don’t more students want to get into the field?”

There’s no single answer to this question, but the main reasons are:

Continuing with the point above, it’s not quite accurate to say that merchant banks are “combined IB and PE firms.”

Both investment banks and merchant banks indeed advise companies on deals, but the investing side at smaller, dedicated merchant banks tends to be more like venture capital or growth equity.

Partially, that’s because their available capital is closer to what an average VC or growth equity firm might have.

But it also happens because if a merchant bank runs a sell-side M&A process for a client, it can’t say, “Process over! We’re going to buy this company outright instead. Potential buyers, please go away.”

However, it could easily make a minority stake co-investment in the company along with the other buyer(s) or investor(s) and say, “We really believe in this company! Trust us.”

Any discussion of the top MB groups must start with Goldman Sachs, which has an actual “Merchant Banking” group.

Then there are large investment banks that also do merchant banking, but usually via external arms.

Other large banks, such as JPM, Citi, DB, and CS, did merchant banking directly before 2008 but have since moved to this model of investing via external entities.

For example, One Equity Partners is the “private merchant banking arm” of JP Morgan, focusing on leveraged buyouts and growth equity investments in middle-market companies.

Some of the elite boutiques, such as Centerview and Greenhill, have similar arrangements as well.

Outside of these larger firms are the independent, dedicated merchant banks.

At the top of that list is the Raine Group, a prominent TMT-focused firm and probably the most “famous” merchant bank.

Recruiting: How to Get Into Merchant Banking

The MB recruiting process depends heavily on the type of group you’re targeting.

If you’re aiming for the Goldman Sachs merchant banking division or the other large banks’ external MB divisions, it’s essentially private equity recruitment all over again.

These groups tend to favor candidates from their own IB divisions, at least for PE roles. For credit and other areas, external hiring is more common.

The process is more similar to traditional investment banking recruitment one at the smaller, dedicated merchant banks.

In the U.S., expect interviews that start over a year before internships, with candidates drawn from undergrad and Master’s programs.

You can still use the same networking tactics (cold emails and informational interviews) to win interviews, and a few of these banks might conduct on-campus recruiting at the top schools as well.

The main difference is that there are fewer internship positions because there aren’t that many dedicated merchant banks.

If you’re interviewing at a smaller, dedicated MB, assume that it will be mostly IB-style questions.

Unlike the elite boutique banks, merchant banks do not have a reputation for asking extremely-difficult-to-obscure technical questions.

If anything, interviewers sometimes focus more on behavioral questions because they want to assess your long-term interest in the field.

Another difference is that even if you’re interviewing at a smaller/dedicated MB, you need to know their portfolio companies.

Research them, understand the themes, and be able to speak to 1-2 companies in more detail.

Case studies and financial modeling tests will come up if you’re interviewing at groups that operate more like dedicated PE firms, but they are not likely at the smaller merchant banks.

While investment banks expect their Analysts to move on after a few years, many prominent merchant banks want to retain their new employees for the long term.

So, your answer to this question needs to be a little more in-depth than “I want to work on Type X deals in industry Y.”

You could answer by pointing to the benefits of having “skin in the game” by investing in companies instead of just advising them, and you could highlight the advantages of advisory work combined with investing work.

For example, you’ll get to work on many deal processes rather than rejecting 99% of deals in the early stages, and you’ll also be able to use critical thinking rather than just blindly selling your clients.

Also, monitoring portfolio companies may be less of a burden in merchant banking because the smaller MBs rarely take control positions.

So, merchant banking combines the more interesting parts of IB and PE while dampening the less engaging bits.

Once again, the theme here is “a mix of IB and PE,” but at the merchant banking arms of larger banks, it’s much more like PE in terms of daily tasks, hours, and promotions.

So, refer to the private equity career path article and expect numbers in-line with the ones there: 60-70 hours per week at the junior levels and more like 80+ per week at the biggest funds.

Promotions to the mid-levels, such as Senior Associate and Vice President, are fairly common, but advancing beyond that is challenging because few senior people leave willingly.

At the smaller, dedicated merchant banks, expect work, hours, and promotion timelines in-line with those of the investment banking career path.

The more likely explanation is that the hours at smaller firms, in general, are better because the average deal size is smaller, and there are fewer simultaneous deals.

With promotions, one key difference is that many of these dedicated merchant banks want to retain good Analysts and Associates for the long term and groom them into senior bankers.

So, there may be a slightly higher chance of getting promoted if you perform well enough.

Once again, this category comes down to: “Closer to IB compensation or PE compensation depending on the firm and group type.”

If you’re too lazy to click through to the articles on investment banking salaries and private equity salaries, that means:

Similar to the elite boutiques, you get paid in cash even at the senior levels at the dedicated merchant banks – no deferred or stock-based compensation to worry about.

The concept of “exit opportunities” doesn’t apply as readily if you’re at a large bank’s private equity arm because that is typically viewed as the exit.

If you get tired of it, you could potentially get into corporate development, join a traditional PE firm or family office, move to a portfolio company, or even get into related fields like venture capital and growth equity.

And if you want to make a total career change out of finance/investing, you could always complete a top MBA program to reevaluate your options.

On the dedicated merchant banking side, the top firms, like Raine Group, want to keep their Analysts around and promote them.

So, if you’re going into IB mostly for the exit opportunities, you should not be targeting these firms in the first place.

It’s certainly possible to win the standard exits coming from a merchant bank, but you will have to network more aggressively and act more independently – just as you would at a boutique or middle market bank.

I’ve seen suggestions that some of the top merchant banks are on-par with the elite boutiques, but I don’t think that is true.

To be clear: they are great firms that work on interesting deals and offer good careers.

But if your main life goal is to work at a mega-fund PE firm, you should still target the traditional elite boutiques and bulge bracket banks (and even then, your odds are still not great).

Is Merchant Banking Right for You?

In short, it depends on what you mean by “merchant-banking” as well as your current status.

If you’re thinking about joining the private equity arm of a large bank after working in IB, it’s comparable to traditional PE, so it has all the advantages and disadvantages of careers there.

If you’re an early university student who’s aiming for 1-2 initial internships so you can be competitive for IB recruiting at large banks, merchant banks can be good entry points.

You can cold email them and ask directly for internships, and you should get a decent response rate if you’re using good templates and putting in enough effort.

They’re not as overlooked as search funds, but they’re still off the radar of most students – which means less competition for you.

On the other hand, I’m not sure I would recommend merchant banking as the best option for an entry-level job.

If you want to stay in the industry for the long term and do both advisory and investing work and you get an offer at a good firm, sure, go ahead.

But do not be fooled into thinking that it’s comparable to “starting at a large PE firm” – because it’s not.

Unless you happen to win a full-time Analyst offer in the PE arm of a large bank (good luck), the style of investing is quite different, and you will work on smaller deals.

And you’ll have to deal with confusion over the term “merchant banking,” as recruiters are not exactly known for their understanding of nuance.

So, as with other alternatives to traditional IB/PE, merchant banking can be a good option for the right person – but it’s also a more specialized one.