Why Investment Banking? How To ACE This Interview Question Every Time 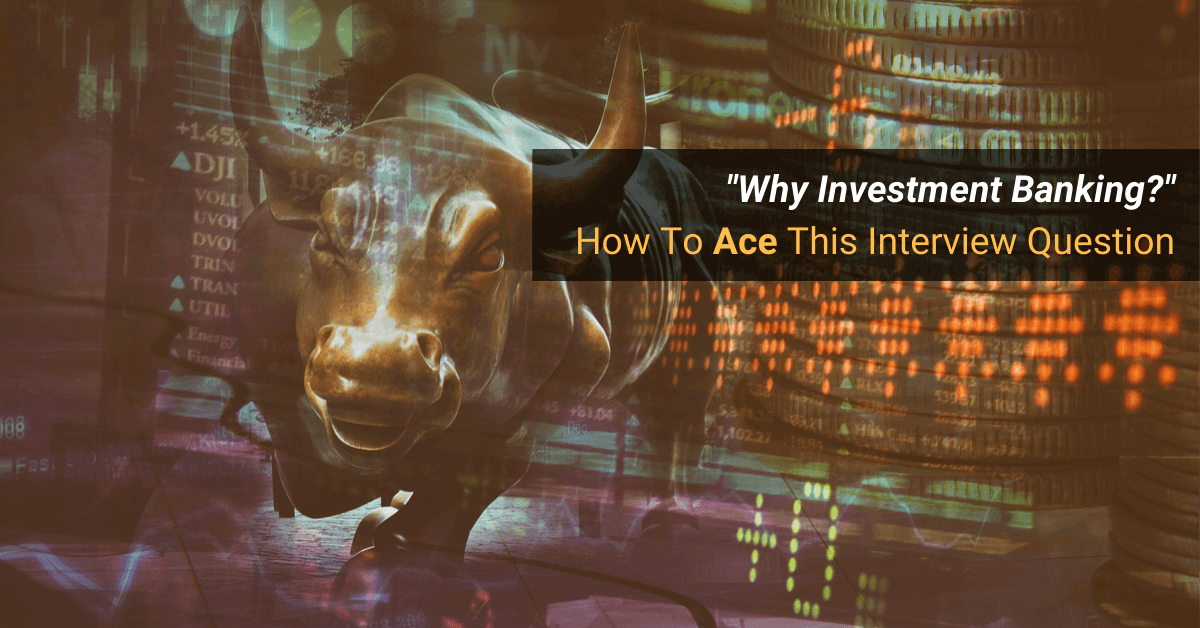 “I looked at all the articles on your site but nothing told me WHY I want to get into this industry.

Can YOU tell me why I want to be an investment banker?”

It’s a question you’ll get in EVERY interview.

But it’s also a question where 90% of interviewees give terrible answers, no matter what their background is.

I can’t tell you exactly why you want to do investment banking… but I can tell you what to say in interviews.

So, why investment banking?

The Conventional “Wisdom” – Saying the Generic

Most websites, books, and other resources recommend generic answers:

But there is a problem: interviewers have heard them thousands of times and will start dozing off if yours resembles one of the above.

A friend at a bulge bracket bank in Asia said one recent interviewee gave the following answer for his “Why Investment Banking?” question:

“I… just want to learn. Nowhere else would give me the learning opportunity, and I want to learn so much… I’m really interested in learning and investment banking is the best place to learn.”

Uh, so why don’t you just stay in school then?

The Real Way to Answer the Why Investment Banking Question

It’s not about “honesty.”

It’s about being personal.

You can include some of the “generic” points above in your answer, but you shouldn’t limit your answer to those.

Instead, you need to mention something from your background or interests that NOT everyone else can just look up online and regurgitate in interviews.

We’re going to look at 2 ways you can do this: the “Big Picture” method and the “Slice of Life” method.

With The Big Picture Method, you answer the Why Investment Banking question by talking about how you started out on another path but shifted your interest to finance over time.

This one works best if you’re:

The formula is simple: Background in One Field +Experience in Finance = Long-Term Success.

This is not the “Tell me about yourself” question, so you need to get your points across quickly – take any longer than 30 seconds and you’ll bore the interviewer.

Model Answer: How An MBA-Level Career Changer Could Respond To Why Investment Banking:

Let’s say you worked at a healthcare policy think tank, started to learn more about the business of healthcare, and then decided to go to business school to re-brand yourself and get into finance.

You would start by mentioning how you were interested in biology/medicine/healthcare originally, and enjoyed the work at the institute at first. But then you had to do a lot of research into healthcare M&A deals, you learned more about business/finance, met a lot of bankers, and you realized you were more interested in that side – in the future you want to advise healthcare companies on business decisions, so healthcare investment banking is the perfect match.

Model Answer: How a Former Engineer at Undergraduate Level Could Respond To Why Investment Banking:

Let’s say you’re coming from a technical background, did a few internships, but then realized you were more interested in business.

Talk about how you did well in your internships, but became more interested in business after speaking with friends in different departments, and how you started following startup news, technology M&A news, and recent deals. You’re interested in being an investor in tech companies one day, so combining your previous background with banking experience would let you do this.

I used a similar story in multiple interviews and it always worked.

You need to modify these examples based on what you’ve done, but the basic formula is simple: Background in One Field + Finance Experience = Success in Achieving Long-Term Goals.

If you don’t know what your “long-term goals” are, just make them up to fit the situation.

With this method, you answer the Why Investment Banking question by explaining how an earlier life event made you interested in business/finance and how your interest developed after that experience.

This one works best if you’re:

So let’s say you’ve been a finance major since you started university and you don’t have a “career change” to point to. In that case, you need to think about your family, experiences growing up, school, summer camps, and anything else you can think of that can explain how you became interested:

It doesn’t need to be a unique story: it just needs to be something that not everyone else will say.

And don’t overestimate the competition: I know from interviewing people at “top” schools that 99% of interviewees don’t even get the basics right.

Once you figure out what your “event that made you interested in finance” is, start your answer by stating what it is and then how it led you into your major, internships, and jobs, and how you see banking as your next step to achieve whatever you’re thinking about doing in the long-term, which is hopefully related to business.

There’s nothing “wrong” with saying you want to learn or that you’re interested in corporate finance – but you shouldn’t stop there.

You need to set yourself apart by thinking about your Slice of Life or your Big Picture.

And Not Just for “Why Investment Banking”

You need to use this answer for more than just the “Why investment banking?” questions: you have to use it in your “story” and also when you’re networking, because anyone you contact will ask why you’re interested.

Especially if you’re coming from a non-finance background, figuring out your “reason why” is critical because most peoples’ rationale consists of “I want to make more money!”

You can combine these two methods as well – just make sure your answer is short, because there’s nothing worse than asking this question and having someone ramble for 5 minutes after you’ve lost interest within 30 seconds.

Keep it to a few sentences and explain how your own background or some specific experience makes you a good match for the group you’re interviewing with.

Whatever you do, avoid stating the generic and talking about how you “want to learn.” You need to tie your “reason why” to what you’ve done in the past and what you want to do in the future.

There are a few situations where responding to Why Investment Banking isn’t straightforward. For example:

For #1, avoid the temptation to make your story “complicated.” Skip less relevant details and simplify your background so that it’s understandable in 30 seconds.

For #2, if you’re speaking with a bank you’ve interviewed at before, you should emphasize how you’ve learned / improved a lot since your initial interviews and have realized you’re even more interested now after completing your internship.

If it’s a bank you haven’t interviewed with before, say that you only became seriously interested over the summer and don’t mention your previous interviews.

For #3, say that you did well but didn’t like your group and didn’t fit in with the culture. You can’t lie about receiving an offer – but you can position it as being a “lack of cultural fit” rather than you not performing well.

So… Why Investment Banking?

That’s your homework: go and spend 30 minutes planning out what you’re going to say and which approach you’ll use.

And whatever you do, please don’t use the word “learn” 10 times in your response.