Private Equity Mega-Funds: The Best of the Best?

Ask the average student or professional in the finance industry about their long-term career goal, and they’ll usually say, “private equity mega-funds.”

Of course, they may not phrase it exactly like that.

They might just mention the names of some large firms, such as KKR or Blackstone, and say that they’ve been dreaming about them since the age of 5.

Similar to middle market private equity, though, there are some definitional problems here.

Everyone agrees on the biggest private equity firms by assets under management (AUM), but what is the cutoff point to qualify as “mega”?

Should you use the total AUM or the 5-year fundraising total? What about the average deal size?

How diversified should the firm be?

I don’t have all the answers, but I’m going to present them in this highly professional diagram anyway: 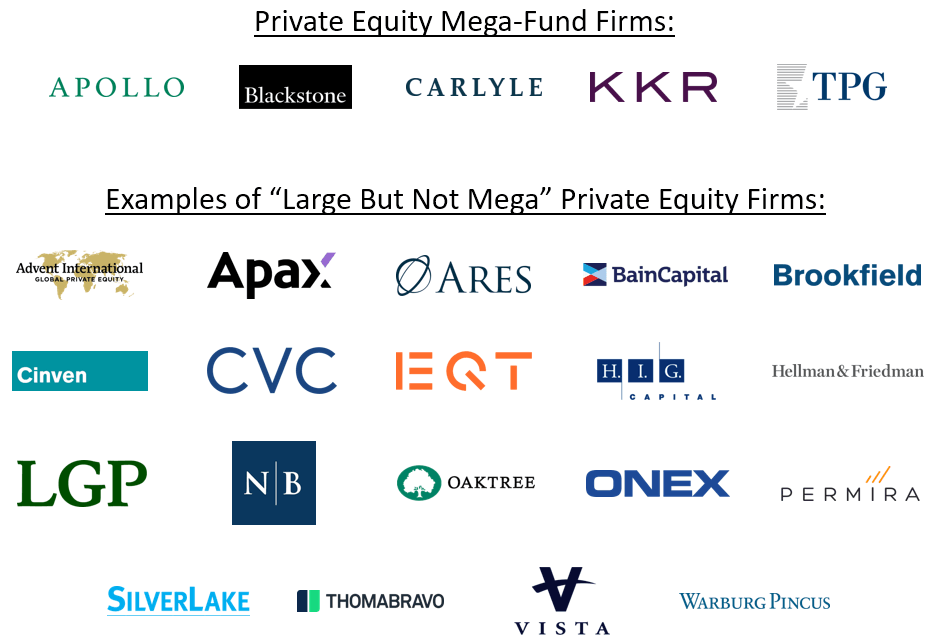 There are many other “large firms”; this list is representative, not comprehensive.

And yes, I realize Brookfield acquired a majority stake in Oaktree, but Oaktree still operates independently, so I am listing both firms.

Definitions: What is a Private Equity Mega-Fund?

There are a few components to a PE firm’s classification:

Private Equity Mega-Fund Definition: The “mega-fund” PE firms tend to have ~$100 billion or more in assets under management (AUM) and individual fund sizes of $10-15+ billion, and they execute deals with an average size of $1+ billion; these firms are also highly diversified in terms of geographies, industries, asset classes, and investment strategies.

Many sources online state that a “mega-fund” is one with at least $5 billion in it.

But this is not that helpful because when most people use the word “mega-fund,” they refer to entire firms rather than individual funds at a firm.

I set $1 billion as the average deal size here, but you’ll see many deals worth $5+ billion, $10+ billion, or even $20+ billion, depending on the market environment.

You might wonder why certain firms with significantly more than $100 billion in AUM, such as Brookfield in Canada or Ares in the U.S., are shown as “large but not mega” PE firms.

In both cases, it’s because they focus on areas outside of corporate private equity.

For example, Brookfield has $650+ billion in AUM, but most of it is allocated to real estate, credit, and infrastructure.

Less than $100 billion is allocated to private equity, so it’s not the firm’s main focus: 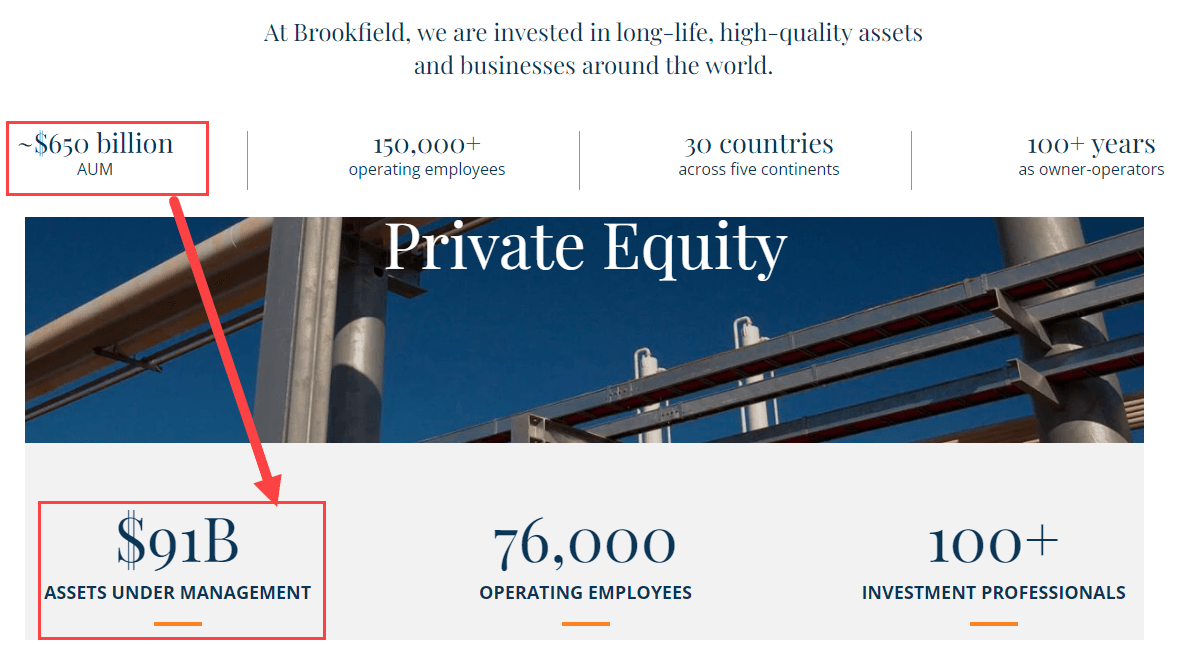 Similarly, Ares focuses on credit rather than traditional private equity, so it doesn’t qualify as an official mega-fund: 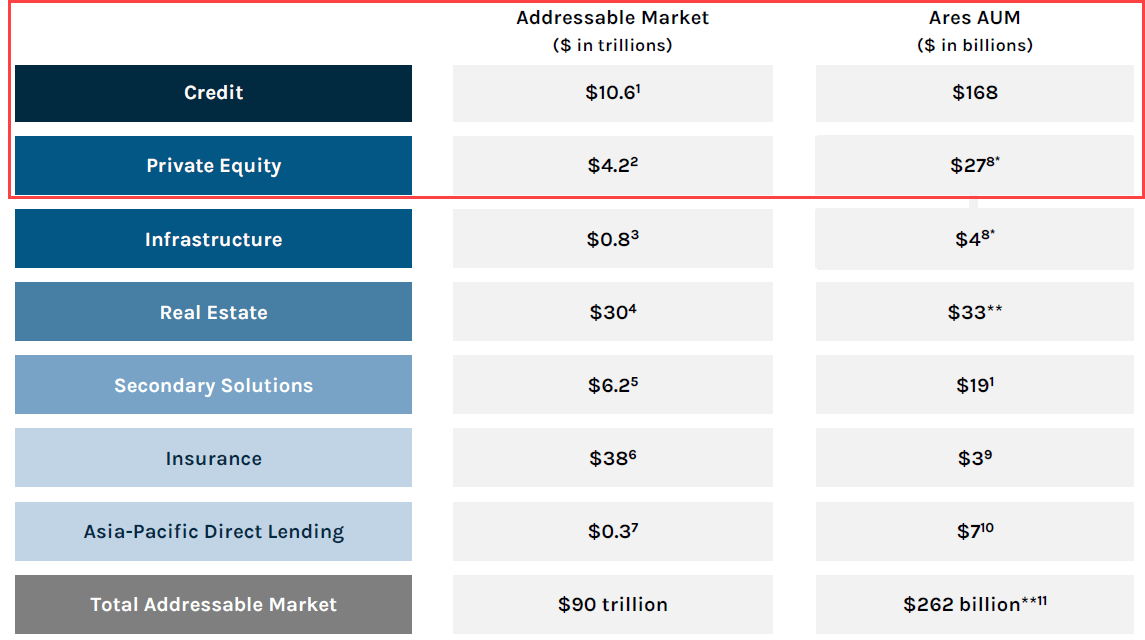 On the other hand, firms such as Thoma Bravo and Silver Lake are “almost big enough” to qualify as mega-funds, but they focus on specific industries, such as technology or TMT, making them less diversified than the likes of KKR or Blackstone.

Most mega-funds have these qualities in common:

While PE mega-funds have always been the giants of the industry, they’ve taken on special importance over the past decade because funds keep getting bigger: 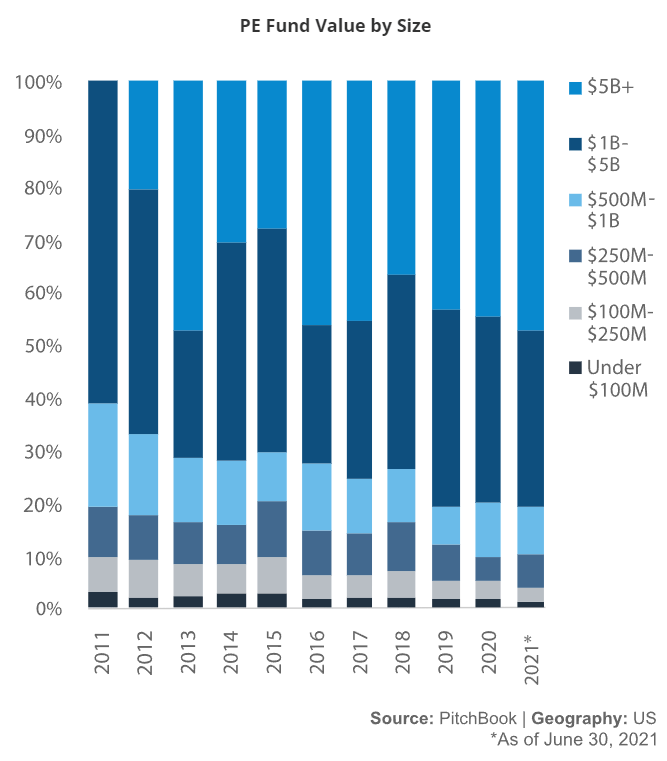 Before moving on, it’s also worth addressing firms that are “large but not mega.”

Examples include Silver Lake, Thoma Bravo, Ares, CVC, EQT, Vista, Hellman & Friedman, and plenty of others from the logos above.

The recruiting process and day-to-day work at these firms are similar to mega-funds.

Expect to work long hours on large deals, and as a junior person, expect to do a lot of financial modeling and due diligence and not much else.

The difference is that many of these firms specialize in a specific strategy, industry, or asset class, and they are open to a broader pool of candidates.

For example, if you’ve worked in a good industry group at a bulge bracket bank, you could recruit for these firms.

You don’t necessarily need to be in “the bestest group ever” to have a good shot.

And if you’ve been a consultant at one of the top three firms (MBB), you might have a chance at one of the PE firms known for hiring consultants, such as Golden Gate Capital.

We discussed these differences in the article on middle market private equity, so please refer to that for a detailed comparison.

The skill set is also quite different, especially as you move up to the mid-level and beyond.

Since you’re dealing with smaller, often family-owned businesses, you need to be much better at connecting with owners and operators and convincing them to work with you.

Communication/negotiation abilities are still important at the mega-funds, but the context is different since major company decisions depend on the Board or a shareholder vote.

How to Recruit at the Private Equity Mega-Funds

The on-cycle recruiting process here is fast and unforgiving, at least in the U.S. (in other regions, the process often starts later and moves more slowly).

We published an article about this process a few years ago; not much has changed, but the timing may differ due to the continued pandemic disruptions.

The main points are:

Occasionally, off-cycle spots at these firms open up, in which case you can certainly apply.

But even that is quite random, and you still don’t have a great chance if you’re not in one of the top groups.

Why Work at a Private Equity Mega-Fund?

The biggest advantages of the PE mega-funds are:

Why Not Work at a Private Equity Mega-Fund?

On the other hand, there are also downsides that explain why not everyone wants to join the mega-funds:

How A Day in the Life Differs at the Large Firms

At the mega-funds and other large PE firms, expect more number-crunching, less “coordination,” and longer hours with more last-minute requests.

So, combine these accounts with the IB Analyst one and up the stakes and stress levels to get a flavor of the environment.

I’ve summarized the main advantages and disadvantages of PE mega-funds above, so I’ll address two other questions at the end:

With the first question, the answer is that most people don’t know what they want to do.

This is especially the case in private schools, elite universities, and MBA programs, where students “decide on” their career goals by copying everyone else.

And, surprise, surprise, that leads to everyone going into finance or consulting (though tech has been gaining on them).

If you don’t know what you want to do, but you’re willing to work like crazy for years, you are a good fit for the private equity mega-funds.

It’s the “default” thing to do, and these firms have been building their reputations for decades to attract these types of people.

As for whether these firms’ reputations will last, I’ve been skeptical of the entire private equity industry over the past few years.

The industry benefited from zero-to-negative interest rates, money printing, and fiscal and regulatory policies that disproportionately benefited the wealthy – and these mega-funds reaped the biggest gains.

I don’t think these large firms will “disappear,” but I do think that some of the policies that enabled their rise will reverse or normalize in the future.

When that happens, the private equity mega-funds will still be there grinding away – but they might not seem quite as shiny as they once did.