Investment Banking Hours: Will You Really Work 105 Hours per Week at Goldman Sachs?

I never thought I would write about investment banking hours yet again.

We’ve covered this topic multiple times in the past, including in the articles on IB Analysts, Associates, VPs, MDs, and so on.

But every few years, a new controversy goes viral on social media, and the world at large says, “Wait, do you really work that much in investment banking? How are those hours legal?!!”

In case you have been offline for the past week, an “internal presentation” based on survey responses from 13 Analysts at Goldman Sachs made the rounds last week.

The headline numbers in the presentation for 1st Year Analysts were as follows:

The unstated claim here is something like: “Yes, investment banking hours are always bad, and we knew that going into the job, but work-from-home policies during the pandemic have made the hours unbearable and inhumane.”

I’m going to start with my quick take on the presentation, explain why IB hours, even in “normal times,” are bad, and then suggest a few possible solutions to the current problems:

My Quick Take on Investment Banking Hours in Pandemic Times

The short version here is:

Going into the current crisis, some people expected that work hours would improve because there would be less “face time” (i.e., pressure to stay in the office late for no reason).

Since you’re always at home, you’re expected to respond to messages and work requests right away.

There’s no such thing as “taking a break” or “going out to eat” because many governments have eliminated normal human activities, and banks have fully embraced the restrictions.

But a few other factors have also made the hours worse:

Putting these factors together, it’s easy to see why banking has become so miserable over the past year.

I do not think that every single 1st Year Analyst is working 105 hours per week, but I do think the hours have worsened significantly.

That may not sound significant, but it’s the difference between 12.5 hours per day for 6 days with one day off and 12.1 hours per day with no days off.

I’ll suggest a few possible solutions, but let’s first review why the hours are so bad even in normal times:

What Do “Investment Banking Hours” Mean? 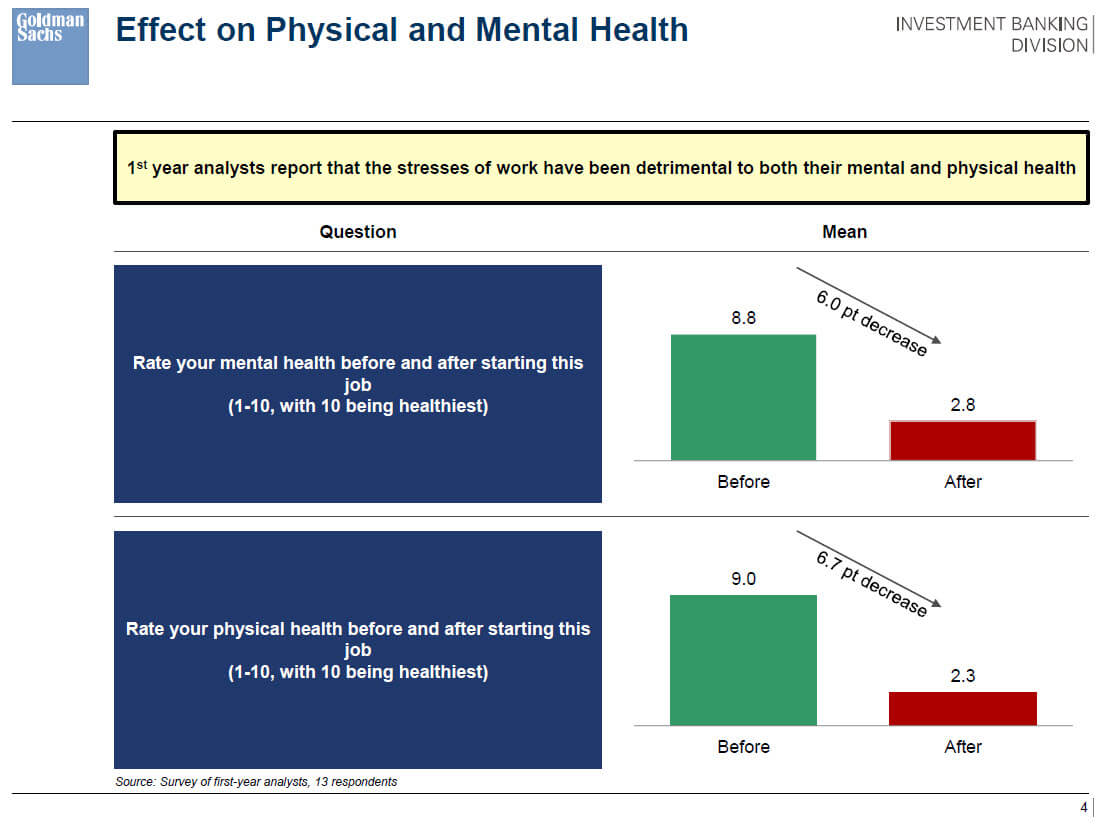 Bankers (and most knowledge workers) typically measure their hours based on their time in the office. For example:

But this is not quite accurate because this person was not “working” this entire time.

They were probably waiting around for a client or a senior banker and reading the news.

They probably went to get food or coffee at some point.

And they probably spent some time chatting with co-workers about non-work topics.

Even if you subtract that time, the average workday is still long.

But it’s not quite as insane as it sounds because 80 hours in the office might equate to 60 hours of “real work” due to significant downtime.

There are exceptions, and some firms and groups do more “real work” than others.

Investment banking hours are much longer than those in other jobs because of four main reasons:

Banks have tried to improve the work environment by offering “protected weekends” to junior bankers (i.e., no work from Friday night through Sunday morning).

The results of these policies were mixed, at best, as most people reported that the total number of hours did not change.

Yes, it was nice getting a free Saturday each month, but your hours on Sunday – Friday usually got worse as a result.

Here’s a bit more detail on each factor above:

If a single executive at a client company gets upset over something, they could immediately cancel the deal, resulting in millions of dollars in lost revenue for your bank.

Bankers sell their time and attention – not a tangible product – so they need to provide it, even if a client calls at 1 AM on Christmas with an urgent request.

But that business model would also be far less profitable; it’s why you earn much less in Big 4 Transaction Services.

When you work on an M&A deal, much of the work happens in the beginning (creating marketing materials, presentations, and financial projections) and at the end (negotiating the definitive agreement, arranging the financing, resolving last-minute disagreements, etc.).

But in the middle of the process, random events, requests, and problems always come up.

You might get an acquisition offer from a buyer who dropped out but then came back at the 11th hour.

Or maybe your client just missed its earnings forecast, and you need to revamp your 10,000-row financial model.

Or maybe the CEO is having a bad day, and he wants to see unnecessary analysis, just for fun.

Other firms that deal with unpredictable work demands, such as web hosting companies and oilfield services companies, handle these issues by hiring teams to work in shifts.

But that approach doesn’t work well in banking because it’s more difficult to divide the labor (see below).

The problem in IB is that many deals are different and require client-specific knowledge.

You normally set up financial projections one way, but you had to modify rows 95-110 for one client because of an issue that came up in an email exchange with the CFO last year.

Or there are 17 versions of the company’s internal projections, and you’re using different versions in different slides of the management presentation – and only you know the logic.

You can come up with rough guidelines, but you can’t describe all the steps universally and comprehensively.

There might also be thousands or tens of thousands of documents for a single deal, so it’s impossible to “learn” everything quickly.

Senior bankers also want to ensure accountability by designating one go-to person for each part of a project.

If a VP wants to change a model, they do not want to ask 2-3 Analysts – just the one person in charge of it.

Finally, there is enormous cultural gravity in favor of long hours because many senior bankers view them as “paying your dues.”

Plenty of bankers introduce more work or last-minute requests not because they’re necessary, but because they want extra analysis “just in case.”

Most meetings do not require 100-page pitch books; many clients barely even read the full presentations.

And most changes requested at 3 AM for a 9 AM meeting are not important – or they would have been requested much earlier.

Investment Banking Hours by Position and in Regions Outside the U.S.

In general, the hours tend to improve as you move up the ladder (though, again, work-from-home has upset this rule).

A Managing Director still does not have a 40-hour workweek – it might be more like 50-60 hours per week – but it is more manageable.

Some groups, such as Equity Capital Markets, have also been known for reduced hours and better work/life balance (well, at least until SPACs came along).

Outside the U.S., people often argue that hours are “better” in London and other European locations and “worse” in Hong Kong and other parts of Asia.

There may be some truth to these claims, but they tend to be a bit exaggerated. Yes, your life will be marginally better or worse in some places, but it’s still investment banking.

Overall, working in a smaller, regional financial center (e.g., Houston in the U.S.) and at a regional boutique bank rather than an elite boutique or bulge bracket bank make more of a difference.

What’s the Solution to Investment Banking Hours During the Pandemic?

As you can see, even in a normal environment, it’s difficult to “improve” the hours in investment banking because of these cultural, work, and business model issues.

The pandemic has made it even more challenging, and I don’t think there’s a great solution until people finally return to the office.

Normally, “hiring more people” is not a feasible solution because deal work is unpredictable and difficult to divide.

But much of the added workload this past year has come from speculative pitches, not deals – or nearly identical deals, like SPACs.

Pitch work is easier to divide, and a pitch does not necessarily require one dedicated Analyst because it’s more of a “one-time event.”

Banks seem to be hinting that they’ll hire more junior bankers to address these issues, but they also like to make their employees suffer, so who knows.

There is no perfect solution, but implementing one or more of these points might make investment banking hours more bearable.

And in the meantime, you can wait for “work from home” to end in approximately 567 years.