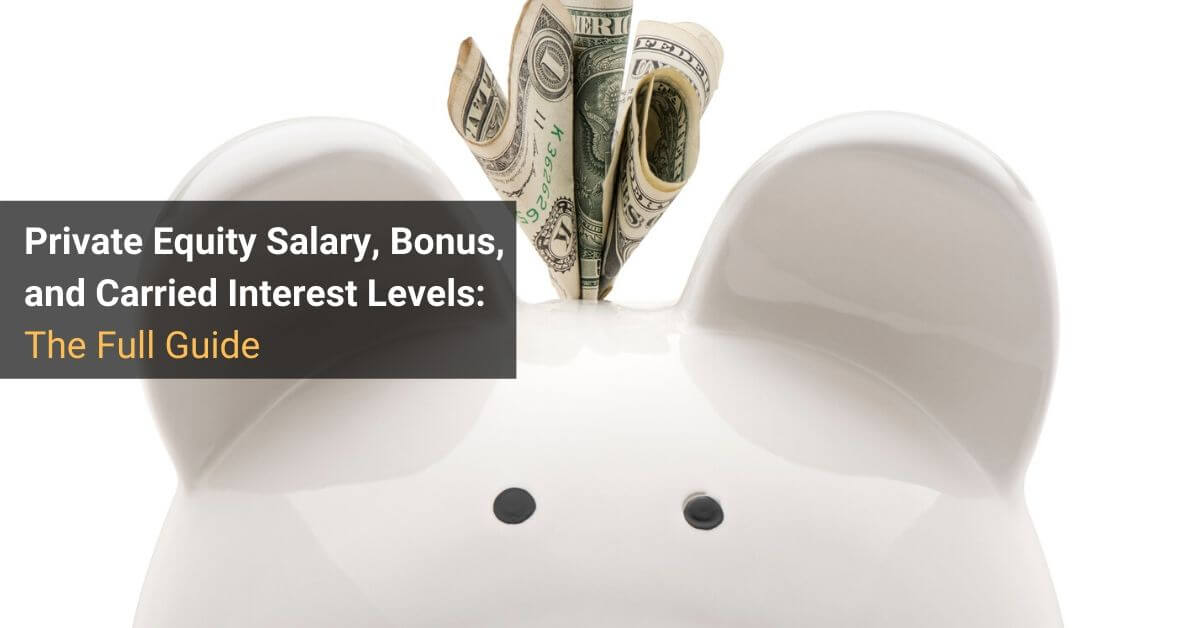 When it comes to private equity salaries, the first question we usually get is, “How much?”

It’s a reasonable place to start, but if you want to make a long-term career in the industry, your follow-up questions should be:

We’ll delve into those topics here, but let’s start with the cold, hard cash compensation ranges:

These are ranges based on quartiles of compensation survey data as of 2020, so it’s possible to earn above or below these figures.

These numbers are for North America, and they’re often substantially lower in Europe and Asia.

Carried interest might be generous in those regions, but cash compensation is almost always lower.

Compensation also tends to be lower at “small funds,” i.e., ones with under $1 billion in assets under management. For example:

How to Understand the Private Equity Salary, Bonus, and Carried Interest Structure

Large firms, such as the bulge bracket banks, defer a high percentage of compensation or pay it in stock rather than cash for senior-level employees.

By contrast, private equity compensation is more difficult to explain.

The GP is the firm itself, and the LPs include institutional investors such as pension funds, funds of funds, and sovereign wealth funds, as well as high-net-worth individuals.

The LPs and GP agree on terms such as the life of the fund (often around 10 years), the management fees, the distribution waterfall, and investment requirements such as company types, geography, and diversification.

If you understand this structure, it’s easiest to think of private equity compensation in terms of “Sources & Uses”:

When private equity began decades ago, firms charged the LPs management fees to cover the fund’s operating costs before they could invest in anything.

Fees were around 2% of total funds raised, and somehow, decades later, they’re still around 1.5% to 2.0% of the committed fund size.

This percentage often scales down after the “investment period” (the period during which the firm makes new investments, usually 5 years for a 10-year fund).

Or, after the investment period, the fees might switch and become based on net invested capital rather than “committed capital.”

That way, a fund can’t raise $1 billion, invest only $600 million of it, and keep earning fees on the full $1 billion.

You can see why this fee structure supports high compensation: 2% of a $1 billion fund is $20 million per year.

And you don’t need 100 people to operate a $1 billion fund – it might just take a few dozen, with many in back/middle-office roles.

Beyond management fees, some firms also charge “deal fees” to portfolio companies based on the deal type and… whether or not they can get away with it.

The private equity mega-funds sometimes label these fees “net monitoring and transaction fees,” and similar to management fees, they’re charged regardless of performance.

They might only add up to ~20% of the total management fees, but they’re charged directly to companies – so LPs tend not to object.

Finally, there are investment returns.

If a PE firm raises a $1 billion fund and turns it into $2.5 billion, it will earn a percentage of that $1.5 billion return… depending on the time frame and terms of the LP/GP agreement.

It’s standard for firms to charge 20% on this return and to require a certain hurdle rate first.

For example, if the hurdle rate is 8%, then the fund would need to earn an 8% IRR before it could earn 20% of the profits.

This hurdle rate exists because the LPs take on additional risk by investing in illiquid assets, such as private equity firms, so they expect higher returns.

If the fund’s IRR is only 5%, the LPs could have skipped private equity and invested in bonds or a 60/40 portfolio.

Also, the hurdle rate aligns the interest of the LPs and GP by requiring a minimum return before the GP earns anything.

On the “Uses side,” private equity salaries and bonuses are straightforward.

These are cash payments made each month during the year (base salaries), with one lump-sum payment at the end of the year (the bonus).

Management fees and deal fees tend to pay for base salaries since these fees are fixed.

These same fees also cover bonuses, but bonuses are “discretionary” based on individual, team, and fund performance, which gives firms leeway based on market conditions.

The split between base salaries and bonuses is often 50/50 for junior employees, but it becomes more heavily slanted toward bonuses for senior professionals.

Another component of PE compensation is the co-investment.

Some firms allow you to put your own money into specific deals, so if you’re especially bullish on one company, you can invest personal funds and benefit if it performs well.

Unlike carried interest, which is mostly available to VPs, Principals, and Partners/MDs, co-investments are often available to Associates as well.

The final component of compensation, carried interest, is so complicated that we’ll need a few sections to explain it:

The Mechanics of Carried Interest, Part 1

Let’s continue with the example above and say that your firm raised $1 billion and turned it into $2.5 billion by Year 5.

For simplicity, we’ll assume that all the capital was committed and called in Year 0 and earned back in Year 5, even though that does not happen in real life.

The distribution split is 80/20 between LPs and the GP.

In the beginning, the LPs contributed 95% of the capital ($950 million total), while the GP contributed the remaining 5% ($50 million).

The hurdle rate is 8%, so the fund must achieve an 8% IRR before the private equity firm earns anything.

There is also a catch-up clause, meaning that after the LPs receive proceeds up to the 8% IRR, the GP is then “caught up” to maintain the 80/20 split.

Here’s how the funds are distributed in Year 5:

Carried interest can be very lucrative because the Partners at the PE firm might contribute only 1-5% of the fund’s capital, but if it performs above the hurdle rate, they can claim 20% of the fund’s profits.

Of course, it can easily go the other way as well.

For example, what if this fund had grown to only $1.4 billion at the end of 5 years?

The IRR would have been 7%, below the hurdle rate, so the GP would have earned nothing – despite contributing $50 million in the beginning.

Each Partner of the firm would have lost millions of dollars, even though the fund’s IRR was 7%.

The Mechanics of Carried Interest, Part 2

Even if your firm performs very well, you are not going to see most of that carried interest until you become more senior.

The Partners of the firm contribute most of the initial GP investment, so they also claim most of the carried interest pool.

Carry is typically based on the percentage of the total pool for each fund, and it vests over several years (often 5 years, back-end-loaded, and sometimes up to 10).

It’s normally paid once the fund has returned invested capital and achieved its hurdle rate for the entire fund – otherwise, clawbacks might be required.

Compensation reports often list lump-sum dollar amounts, such as an “average” of $2 million of carry for VPs or $3 million for Principals.

But that’s a misleading way to report it because carry is not just “granted” at a single point in time, and payouts tend to fluctuate.

Imagine this same $1 billion fund, and assume that it grows to $2 billion, for a 2x multiple.

The investment profits are $1 billion.

If you receive 0.50% of that, that’s $1 million in extra compensation over the life of the fund.

…but the payout may not happen until Year 7!

That $143K is only what you “accrue” each year, assuming the fund returns 2x and its IRR exceeds the hurdle rate.

Leaving early also creates complications, which is why the bulk of the carried interest pool is reserved for Partners, with some also going to Principals and VPs.

So, About Those Average Carried Interest Figures…

Carry as a percentage of fund capital is usually in the low single digits, even for the “Managing Partners” who contribute and earn the most.

For example, at fund sizes ranging from $1 billion to $10 billion, each Managing Partner might receive 2-3% of the carry pool, which equates to tens of millions over the life of the fund.

Distributed over the life of the fund, that might add up to $1-2 million extra per year.

But those percentages are per fund, so if your firm has multiple funds that you’ve participated in, your total carried interest could be higher.

The bottom line is that carried interest generally won’t be a huge factor until you become a Principal and then a Partner or MD.

When you do, it could add anywhere from $500K to $2 million per year to your total compensation (with a very high standard deviation).

However, there’s a huge amount of uncertainty because payouts tend to be “lumpy,” and one or two portfolio company exits could dramatically shift your fund’s performance.

From the examples above, you can see that fund size makes a huge impact on carried interest, and even on private equity salaries + bonuses (due to the management fees).

However, joining a bigger firm does not necessarily mean that you’ll earn higher compensation over the long term (~10 years) because:

If you stay in the industry for only a few years, yes, go to a bigger firm to maximize base salary + bonus level.

But if you join a smaller fund as an Associate, negotiate a decent percentage of carry, and stay there for 10+ years as the fund performs well, you could come out ahead.

The short answer is that it depends on your definition of “forever.”

Over the past few decades, private equity performance has held up better than hedge fund performance, which is why management fees and carry are higher in PE.

However, it is not clear that PE has outperformed the public markets once you measure performance over different time frames and look at funds launched in different years.

It seems like a lot of the “outperformance” has come from funds launched in the 1990s and early 2000s; the post-financial-crisis picture is mixed, especially as fund sizes have grown.

For more, see the WSJ’s article on this topic and the FT’s coverage.

Also, PE firms have benefited from low interest rates during this period, as well as two big public-market crashes.

And then there’s the fact that most of the “easy targets” are now gone, and that politicians are threatening to crack down on the industry.

The bottom line is no, I don’t think that sky-high compensation in the industry will continue for another 50-100 years.

Something will happen to disrupt that, whether it’s higher interest rates, stricter regulations/taxes, a new investment class that starts drawing people away, much lower returns, political upheaval, or another factor I haven’t thought of.

But for the next 10-20 years, sure, I could see compensation continuing to be quite generous.

So, you can continue to ask, “How much?” rather than “How long will it last?”

VIEW THE GUIDE AND ACE YOUR INTERVIEWS
Shares
Share This