If you want to know how investment banker salaries and bonuses are trending, look at the discussion and news stories about compensation.

When you see stories about “outrageous bonuses” or “Wall Street greed,” you know it has been a good year for bankers.

And when most stories are about layoffs or people pushing back their planned retirements, you know things are bad.

That leads us to this salary and bonus update for 2023, which you can find below:

NOTE: All numbers are pre-tax for New York-based front-office roles and include base salaries and year-end bonuses but not signing/relocation bonuses, stub bonuses, benefits, etc.

As expected, these numbers are substantially worse than the 2021 numbers across all levels.

Base salaries mostly stayed the same, but total compensation fell by ~15% to ~50%, depending on your level.

Before you leave an angry comment, here are two quick notes:

OK, So What Happened to Investment Banker Salaries and Bonuses Last Year?

As I predicted in my last update, banks used COVID and the resulting disruptions, inflation, and panic as an excuse to raise base salaries while cutting bonuses.

Many people go into investment banking jobs thinking, “My base salary doesn’t matter much; I’ll earn another base salary with my year-end bonus!”

But this is wrong because banks base total compensation on a percentage of revenue, and revenue last year plummeted due to weaker deal activity:

It’s easy to interpret the much lower bonuses and deal activity as terrible news, but I would point out the following: 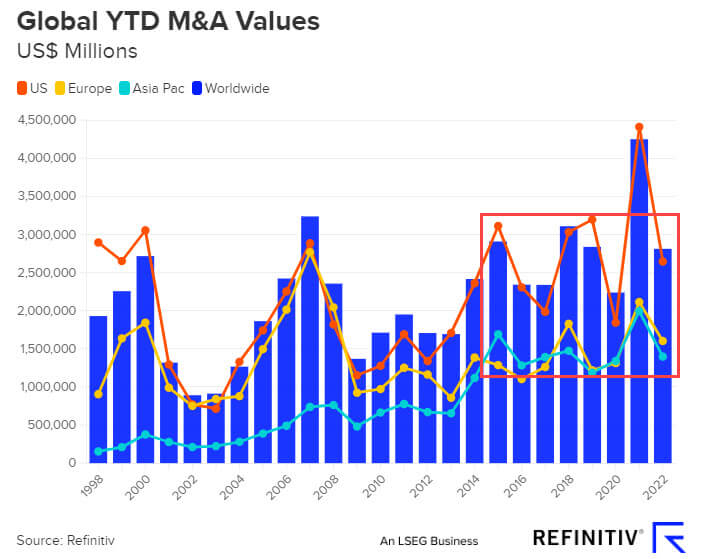 2) Hours / Lifestyle – Yes, deal activity was much lower… but the average hours were also down. Of course, bankers always exaggerate their hours, but quite a few at the Associate level and above were working 50-60 hours per week for $300-$400K in total compensation.

3) Bonus Distributions – While bonuses at all levels were down, Managing Directors took the brunt of the damage. Their compensation is always the most tightly linked to deal activity, so it’s no surprise that it fell by nearly 50% this year.

These developments raise many questions, such as:

But let’s do a refresher on compensation and go level-by-level first:

For most bankers, there are five main components to “compensation”:

IMPORTANT NOTE: The estimates above for Analysts are guesswork because most banks have reverted to paying Analyst bonuses in the middle of the calendar year.

So, I’m extrapolating from the 2022 mid-year numbers and the remaining few banks that pay Analysts at the end of the year.

The overall drop in total Analyst compensation wasn’t terrible – ~15% by my estimates – but the base salary increases in 2021 contributed to this not-so-bad drop.

Year-end bonuses for the few banks that still pay Analysts at year-end seemed to be 30-50% of base salaries.

The exceptions were the elite boutiques, which, again, often pay higher base salaries and higher bonuses.

We’ll see the full numbers in the middle of this year, but I wouldn’t be surprised to see some of these firms paying bonuses well above 50% of base salary.

But if you’re at a middle market or bulge bracket bank, I don’t see total compensation going too far above $200K unless there’s a huge increase in deal activity in the next few months.

Associate total compensation was down by 15-20%.

Base salaries still progress from $175K to $225K at most firms, so lower bonuses explain most of this.

To give you a rough idea of the total compensation numbers across levels at the large banks, factoring in deal flow and ranking/performance differences:

There were some outliers, with a few elite boutiques paying Associates over $500K for the year.

VPs were also down by 15-20%, as base salaries stayed the same and bonuses tumbled.

Some VPs almost certainly earned less than $500K as well, especially if they were in underperforming groups.

I have almost no data on this one, but if many MDs were down 50%, Directors were likely down by at least ~30%.

That still adds up to a lot of money (mid-to-high six figures), but it’s also a substantial drop from the previous year, when some Directors were above $1 million.

As mentioned above, MDs “took one for the team” this year and experienced the biggest compensation drop of all bankers.

In previous years, I quoted ranges such as $1 – 2 million or even $1 – 3 million for MD total compensation, but this year, a fair number of MDs earned less than $1 million.

In short, they earned their high base salaries but often earned bonuses well below 100% of base.

Bloomberg reported it like this (admittedly, for Asia ex-Japan):

“On average, managing directors at banks including Goldman Sachs Group Inc., Morgan Stanley, and Bank of America Corp. have seen their total compensation drop by 40% to 50%, with payouts for senior MDs falling to between $800,000 to $1.5 million and for first-year MDs to $600,000 to $1 million, the people said, asking not to be named discussing internal matters.”

The Arkesden and Dartmouth compensation reports are good sources for the numbers in London; unfortunately, I could not find anything updated for this year’s numbers.

However, I assume the standard 30% discount in London still applies, so you can reduce the levels above by 30% and convert them into GBP to get the numbers.

If you’re wondering about Asia, here’s a report from Executive Access that quotes the following numbers: 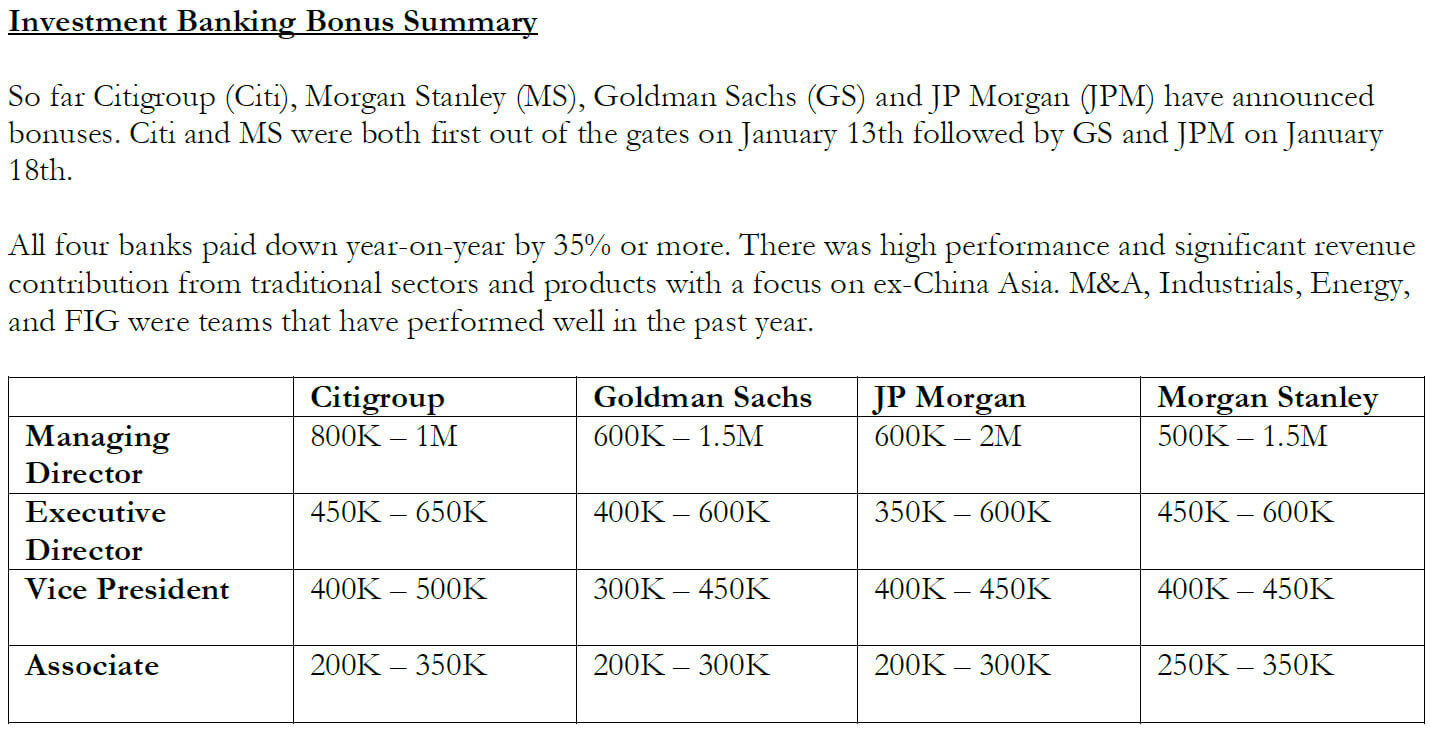 These numbers are on the low side – as Associates in the U.S. can clearly earn more than $350K.

So, I’m not sure how seriously you should take this one.

It seems well-researched, but it also implies that pay is much lower in Asia (possible) or that bankers in the U.S. are simply lying about their bonuses (also possible).

So, Is Investment Banking Worth It? Is It the Best Path a $10+ Million Net Worth?

These results are a good reminder that bonuses are far less predictable than most people think, especially in an unstable macro environment.

Many people now in the finance industry joined in the 2010 – 2019 period, which was comparatively quiet.

Deal activity and compensation rose modestly in most years, and supposedly “shocking events” like Trump and Brexit were quite mild compared to the events of 2020 – 2022.

In the future, I expect compensation to continue to fluctuate significantly from year to year, so you should expect less of a “straight line” in your career and earnings.

If you can perform well, these changes make buy-side roles more appealing.

The pay ceiling has always been higher, but with lower IB bonuses, there’s also more of a difference in average compensation.

I want to close by discussing one specific goal/dream: Many people plan to grind their way up in the finance industry and “retire early” at age 40 with a net worth of $10+ million.

If you consider the total compensation numbers above, taxes, and the cost of living, you’ll see that this is quite difficult to achieve in places like New York and London.

Just for fun, let’s go through the math of after-tax savings as an MD:

If you also assume that you’ve saved up $1 million before becoming an MD and that you earn 5% per year on your savings, you could reach around $5 million after 10 years.

Obviously, this is still a lot of money and would make you wealthy by most standards.

But my point is that reaching $10 million (or beyond) is less of a “sure thing” than you might think, especially since MD turnover is quite high.

Few people start at age 22 and work in the industry non-stop for 18 years; they might do an MBA, quit, or take other jobs in between.

If you want to reach this level more quickly or amass a lot more wealth than this, you’ll need some combination of:

On the other hand, it is possible to become a multimillionaire if you stay in the industry for a moderate amount of time, which could be good enough for you.

It might not be “retire forever” money, but it could easily be “quit and do something more interesting” money.