It’s challenging to discuss middle market private equity because no one agrees on the precise definition of “middle market.”

Does it refer to the size of a PE firm’s most recent fund?

The total amount of capital the firm has raised?

The average size of its most recent funds?

Or does it refer to the firm’s average deal size or portfolio company?

Unlike with the top investment banks, the lines are much blurrier here, and entire categories of firms lack good, simple descriptions.

I believe it’s best to base the “middle market” definition on a firm’s average deal size because fund size or total capital raised doesn’t necessarily tell you how big each deal is.

So, our definition will be:

Some sources expand this definition and state the “middle market” includes deals for as little as $25 million and as much as $1 billion.

Meanwhile, others say that there’s also a “large” category for deals between $500 million and $5 billion.

We could go back and forth on the definitions all day, but almost everyone would call a deal in the low hundreds of millions “middle market.”

If we assume that the average deal size is $300 million, funded with 50% Debt / 50% Equity, and that the average fund has between 10 and 20 active portfolio companies, the average middle-market fund should have capital in the low billions (e.g., $1-3 billion, perhaps up to $5 billion).

Besides the average deal size and fund size, middle market private equity firms have the following characteristics in common:

Audax’s profile on its website sums up middle market private equity quite well: 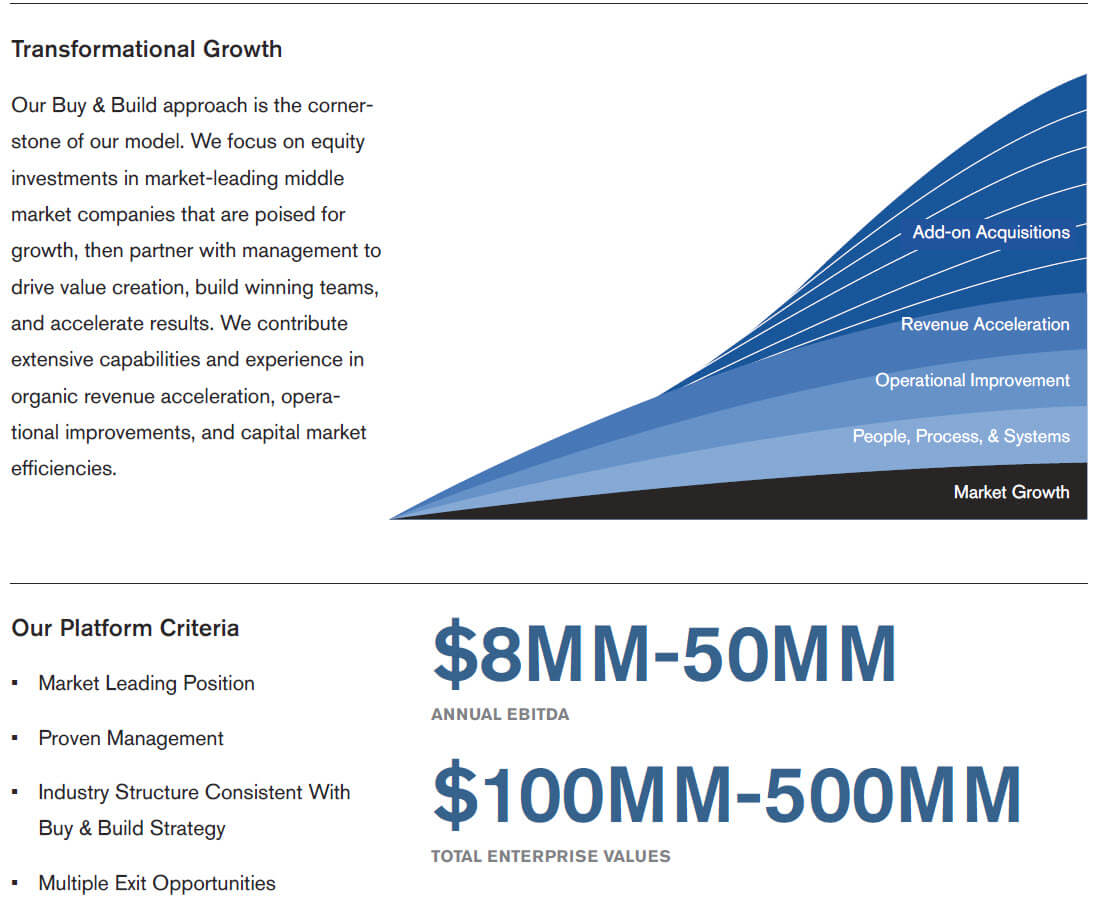 It’s easy to ignore MM PE firms because they seem less glamorous than the private equity mega-funds, but that would be a mistake because they account for a huge volume of deal activity.

For example, in Europe, ~40% of capital raised by PE firms each year goes into the middle market, and in the U.K., the middle market often accounts for ~50% of individual deals and ~30-40% of deal volume in GBP:

In the U.S., middle market PE deals often represent ~50-60% of all individual deals and over 50% of total fundraising.

PitchBook defines these categories as:

While the deal size and types differ, these distinctions matter mostly for recruiting and career purposes.

They may also be closer to the larger PE firms in terms of work hours (longer) and advancement up the ladder (more bureaucracy).

Most people would say that the private equity mega-funds do deals with an average size of $1 billion+ and have individual funds that are ~$10-15 billion+ in size.

Based on that, the most commonly cited names in this category are Blackstone, KKR, Carlyle, Apollo, and TPG.

Other names could potentially be on this list as well: CVC, Apax, and EQT in Europe; Ares, Warburg Pincus, Advent, and Silver Lake in the U.S.; and Brookfield in Canada.

But the definition of “mega-fund” is a separate question that I’m not addressing here (maybe in a future article).

Besides the bigger deals and higher capital bases (AUM in the tens or hundreds of billions and recent fund sizes of $10-15 billion+), the main differences are:

There are so many middle market private equity firms that it’s difficult to rank them or even select the top few because it depends on how you define “top”: AUM? Average annualized returns? Number of deals or portfolio companies?

But you came here for a list, so here goes.

You could argue for including firms like Summit, General Atlantic, and TA Associates in this list, but I would put them in the “growth equity” category and also say they might be a bit too large to qualify as “middle market.”

Note also that the mega-funds do a fair number of smaller deals as well, which is why you’ll see the likes of KKR and Blackstone in deal activity rankings here.

And then there are the Canadian pension funds, sovereign wealth funds, and other institutions that often participate in the middle market, but I consider them separate from these dedicated firms.

How to Recruit at Middle Market Private Equity Firms

There’s a good interview about how one reader went from a boutique/middle market bank to a MM PE firm, so please refer to that for the details.

One word of caution is that although recruiting is more “off-cycle” at these firms, not all firms in this category run their processes this way.

You will encounter more headhunters and on-cycle processes at the “upper middle market” firms, though the timing is usually a bit slower.

Recruiting tends to be slower and involves more critical thinking, such as open-ended take-home case studies, at the LMM firms.

We have published many articles about private equity recruiting, interviews, case studies, and even how to get into PE from consulting, so take a look at those for more.

The biggest advantages of MM PE firms are:

Why Not Work at a Middle Market Private Equity Firm?

The biggest disadvantages are:

A Day in the Life

Both accounts from the PE Analyst and PE Associate articles are based on middle market firms, so you can refer to those.

The biggest differences vs. larger firms are more process and deal-sourcing work and less pure Excel and financial analysis.

Compared with smaller firms – say, ones with $500 million or less under management – you’ll spend more time on deals and portfolio companies and less time on all the other tasks required to keep the firm running.

Despite what you may read online, most people at bulge bracket banks do not get into private equity mega-funds.

The math doesn’t work: each large PE firm might hire a few dozen new Associates per year, but each large bank has hundreds of IB Analysts.

So, most of these Analysts stay in banking or go to smaller PE firms, hedge funds, VC firms, normal companies, or business school.

(And yes, this changes a bit if you add large-but-not-official-mega-fund firms to the list, but not enough to change the conclusions.)

And that’s why middle market private equity firms are so important: you’re much more likely to end up at one regardless of the bank you work at.

But since these firms vary so much, they’re also hard to categorize.

So, if you’re considering your options and speaking with different teams and firms, go with your gut.

You may not be able to explain precisely why one group was a better fit than the others, but just like the MM PE category itself, you’ll know it when you see it.