The Consumer Retail Investment Banking Group: King of the Generalists?

Ask anyone joining a large bank which group they’re most interested in, and consumer retail investment banking is a likely answer.

It’s a great place for anyone who wants to work with well-known companies and brands, gain general valuation/modeling experience, and keep their exit options open.

The benefits of the group are almost like the benefits of getting into investment banking: brand/prestige, technical skills, and exit opportunities.

If you’re unsure about your long-term plans but you want to earn a lot and are willing to put in long hours, why not join the consumer retail group?

That’s a good question, but before answering it, I’ll start by explaining the entire sector:

The classifications vary, but the two most common verticals are consumer staples and consumer discretionary; retailers are usually sub-groups within each one: 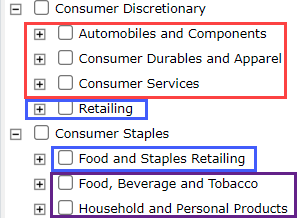 We will deviate from this slightly by counting retail as the third major vertical.

The trends and drivers are the same, but many key metrics differ, and some accounting/valuation points are different.

Here’s a quick explanation of each vertical:

At first glance, these categories may not make sense.

For example, why are alcohol and tobacco companies considered “consumer staples” while car companies are “consumer discretionary”?

Doesn’t the average person need a car more than a bottle of whiskey or a box of cigars?

Yes, but the difference is that segments like alcohol and tobacco are not economically sensitive.

But if there’s a recession, car sales will immediately fall as people start postponing their big-ticket purchases or making alternate plans (i.e., public transportation where it exists).

The consumer retail group is tied with the industrials group as the “generalist king,” which means there are no special entry requirements.

It’s the same IB recruitment process as always, which you should know from all the other articles on this site.

At the MBA level, a pre-MBA background at a consumer retail company helps, but this matching background is probably less important than in a more specialized industry, like energy.

One other note is that there are quite a few boutique banks that specialize in consumer retail or have significant exposure there.

Many of these markets are so fragmented with so many small companies and startups that there’s a big opportunity for boutiques to advise on deals.

Yes, the bulge brackets and elite boutiques dominate the biggest deals, but unlike a sector such as telecom, plenty of smaller deals still occur.

What Do You Do as an Analyst or Associate in Consumer Retail Investment Banking?

Your average day on the job depends on your bank, the size of the companies you advise, and your specific vertical.

For example, if you work with the biggest companies in the auto vertical, such as Toyota, you’ll advise on a lot of debt issuances and occasional buy-side M&A deals.

These companies are constantly issuing debt:

Sell-side M&A and equity deals are more common if you’re working at a smaller bank that advises startups and other growth companies.

But deal flow is also very dependent on your vertical.

For example, I ran a screen for M&A deals with U.S.-based public sellers worth more than $100 million over the past 3 years and got the following deal counts (retail is not broken out separately):

M&A activity is heavily concentrated within consumer discretionary for a few reasons:

Finally, if you work with a lot of offline retailers, expect a good number of restructuring deals as these companies figure out how to survive in the online world: 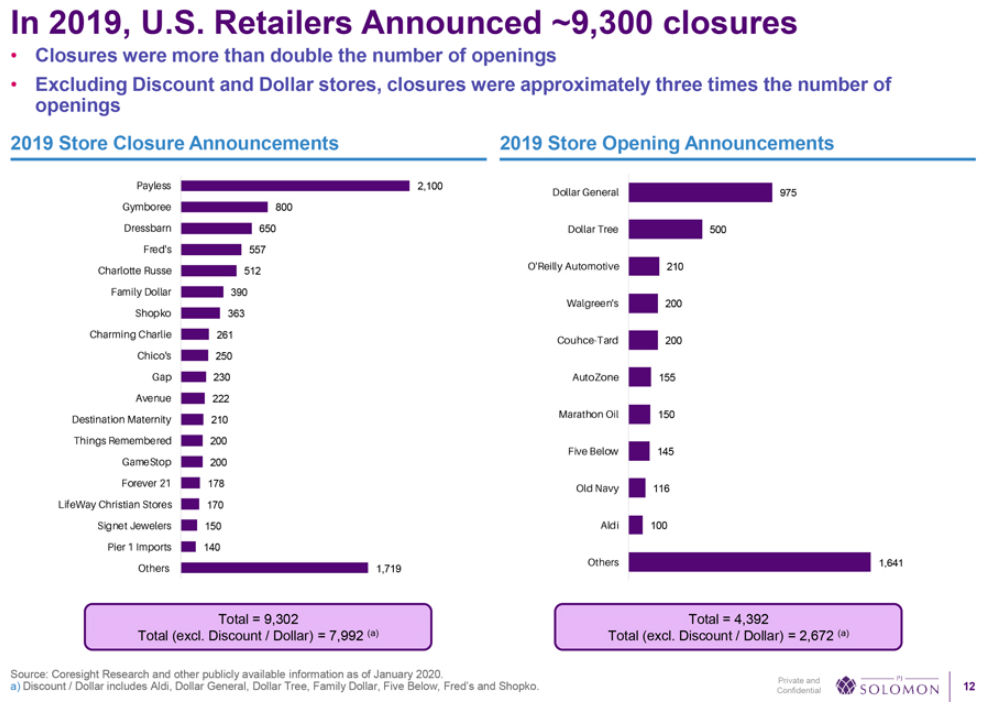 Trends and drivers are similar for the different verticals because many “staples” items were once considered “discretionary,” and overall economic growth, wage growth, and employment trends affect everything.

Also, sales of discretionary items – such as home appliances – influence the demand for staples items such as food and beverages.

Some of the key trends and drivers include:

These trends all affect retailers, but their impact depends on the retailer’s industry and business model.

For example, a specialty retailer like Home Depot is more sensitive to interest rates and demographics than a grocery store.

Lower interest rates and the migration of younger families into suburban and rural areas mean higher demand for homes and, therefore, for Home Depot’s products.

But most people do not “finance” their grocery purchases, so interest rates matter less, and the specific population profile matters less than the total population in an area.

Let’s go through this and mix it up with some bank and investor presentations along the way:

This list is dominated by food and beverage companies, which isn’t surprising since everyone needs to eat and drink to survive.

“Household and Personal Products” are also in this list (makeup, home cleaning, bathroom supplies, etc.), but they represent a much smaller percentage of the market.

When you analyze companies in this vertical, you focus on brand (reduced risk from competition), recurring revenue, the ability to diversify (geographically product-wise), and free cash flow generation.

Margins are crucial, especially for companies with lesser-known brands, and small pricing differences could explain why one company thrives and another fails.

For example, Coke and Pepsi often trade at premiums to other food and beverage companies because they’re franchises and, therefore, have lower cost structures than companies that directly produce and distribute their products.

On the other hand, this franchise model could also turn into a weakness if the company overextends itself or fails to implement quality control with franchisees.

You might break down company performance based on shipments in different segments and analyze the revenue and cost structure for each one separately: 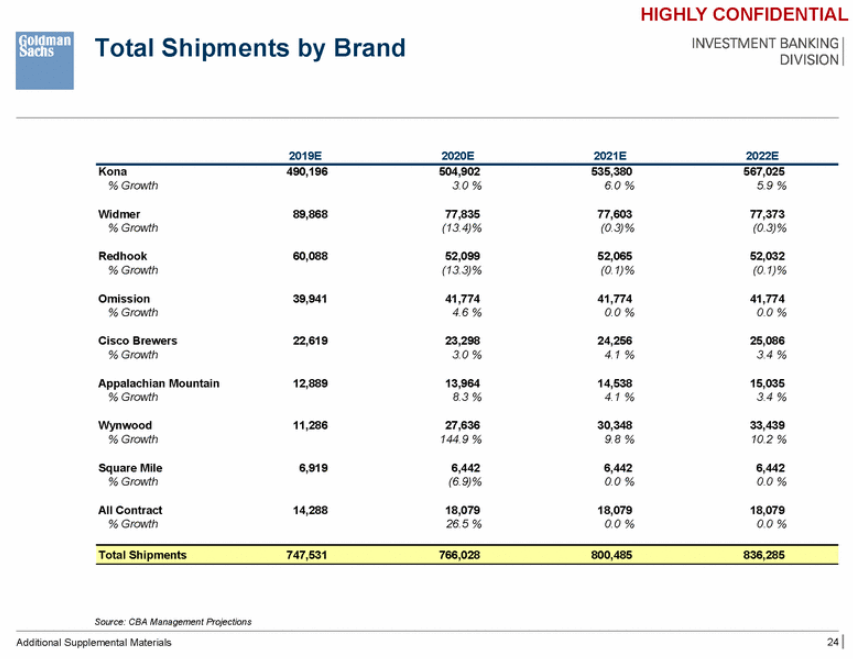 Consumer staples companies traditionally struggle to grow because they serve mature markets with stable consumption patterns, so it’s also critical to dig into the growth drivers:

This list is dominated by automobile companies, which is no coincidence since they sell the highest-priced items here.

But the list also includes home appliance manufacturers, fashion companies, auto/other tool companies, and even restaurants (if you want to call Starbucks and McDonald’s “restaurants”).

The industry tends to be heavily regulated, the barriers to entry are high due to the capital required to produce cars at scale, and inflation can make a very uneven impact.

For example, large car manufacturers may be able to “push back” against component price increases if they do enough business with certain suppliers.

But most auto component companies are smaller and less capitalized and could easily get squeezed due to inflation in raw material prices.

The replacement cycle also plays a major role since the market is mature in most developed countries; most growth comes from EVs and emerging markets earlier in the adoption cycle.

In segments like electronics (e.g., Panasonic and Sharp), R&D/innovation, consumer trends, and the supply and demand of specific components are major drivers.

Many companies in consumer discretionary are also highly dependent on retailers (see below).

For example, textile and apparel companies produce their goods based on retailer demand for inventory. 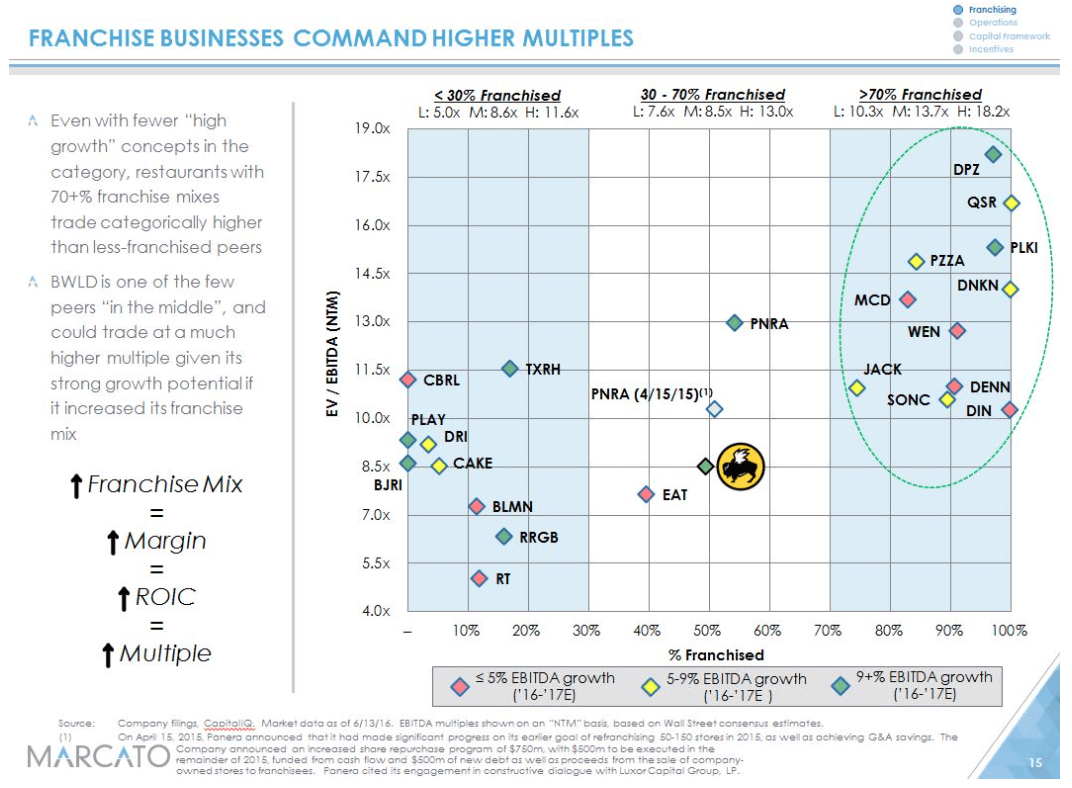 This list is more geographically diverse than the others, which makes sense since retail is a distribution business.

Even if products come from the same suppliers, different companies will spring up in different countries, states, and cities to distribute those products.

The key drivers for retailers are similar to those in the lists above.

If it’s a grocery or drugstore retailer, expect it to act more like a consumer staples company.

If it’s a car, electronics, or appliance retailer, expect more of a consumer discretionary company.

The main difference is that since most retailers do not make their products, they depend on factors such as:

These points are so critical for retailers that some activist investors create detailed analyses to suggest improvements in areas like margins: 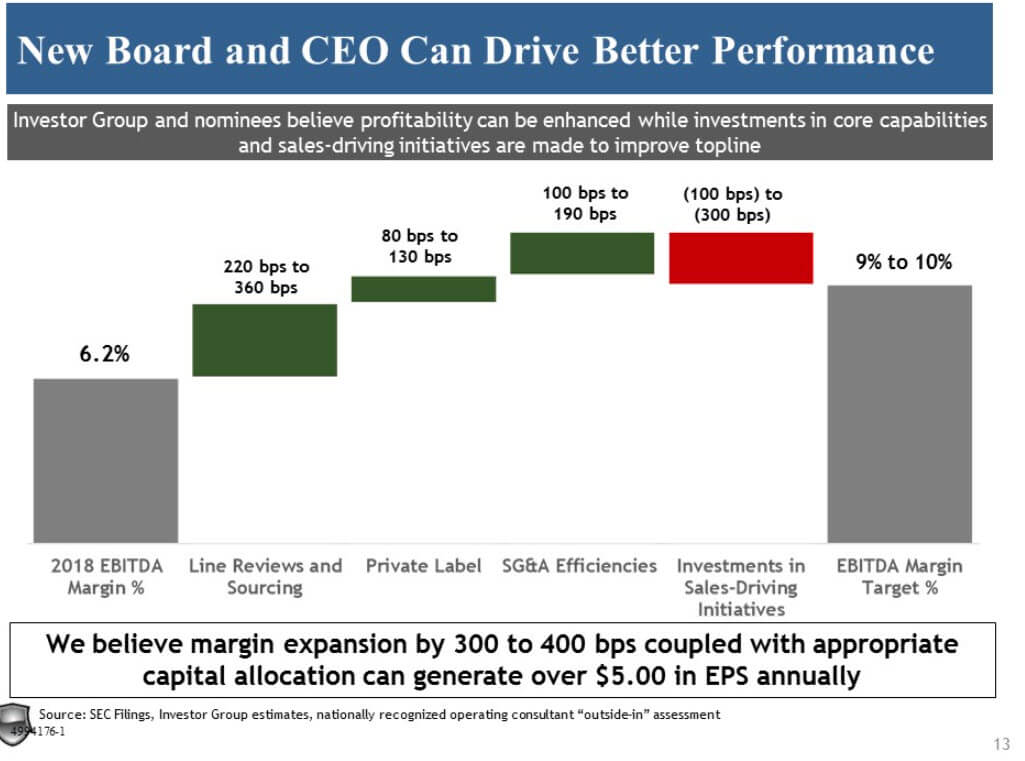 There’s little to say here because consumer retail is the textbook example of a “standard sector.”

Accounting and 3-statement modeling are straightforward (think: Shipments * Average Selling Price or Sales per Location * # Locations), and valuation uses all the traditional multiples and methodologies, such as the DCF model.

If you want examples, take a look at a few from Goldman Sachs and Centerview: 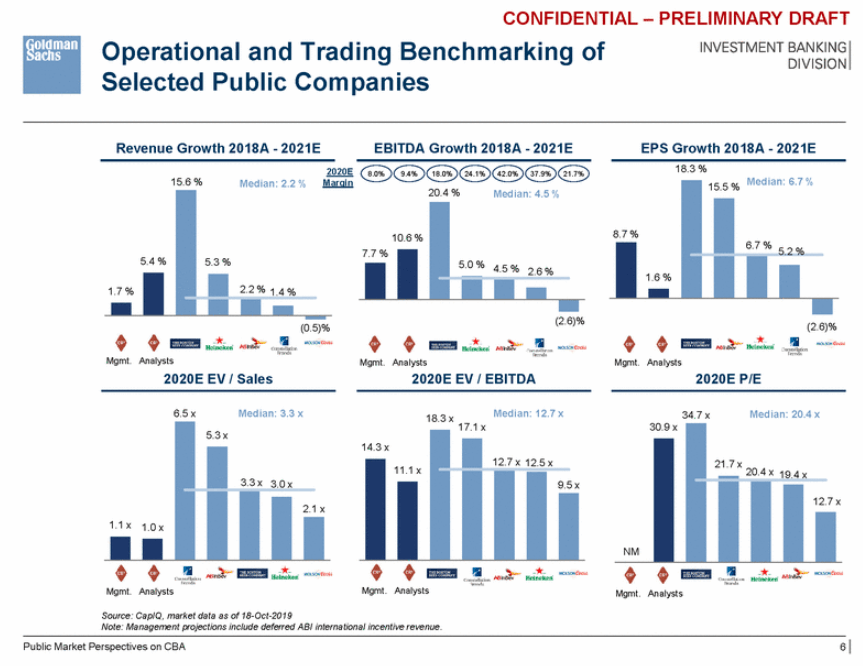 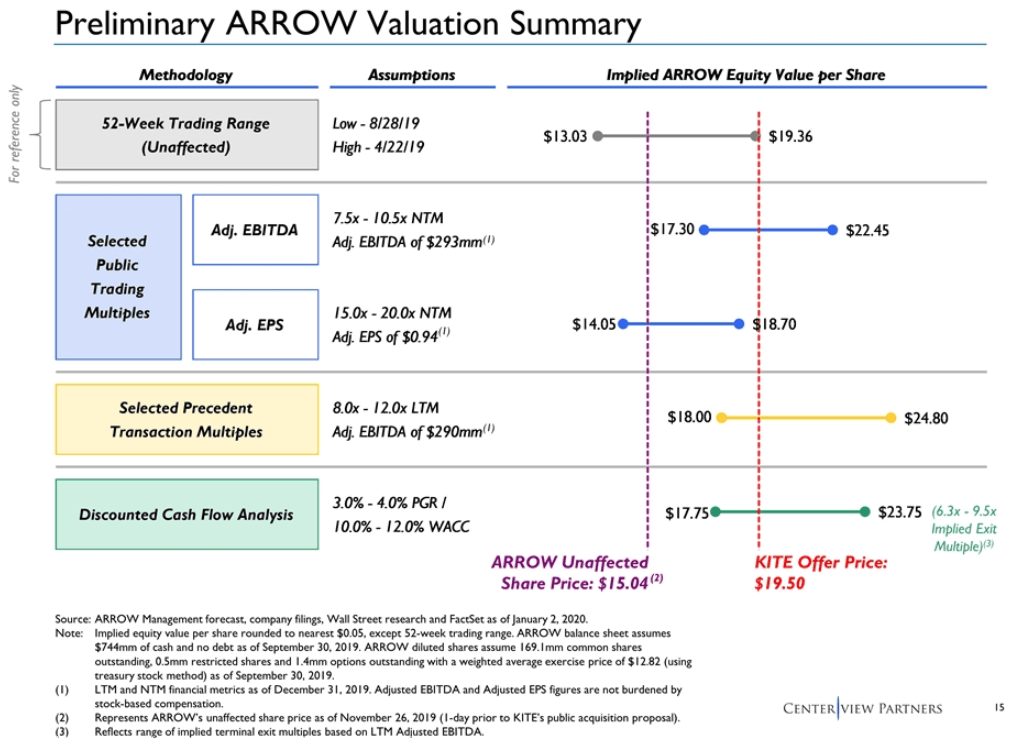 The differences lie in the metrics and the increased importance of certain topics, such as lease accounting.

For example, you’ll see a lot of “per store” and “per square foot” metrics for retailers:

And lease accounting takes on increased importance because many consumer/retail companies have a mix of owned and leased properties.

If you don’t understand the differences, it will be difficult to normalize and compare different firms.

And now to the best part of any “industry group” article on this site:

You’ll see most of the bulge brackets on consumer retail M&A deals; MS, GS, and BAML are particularly strong in equity issuances.

Other large banks such as JPM, Barclays, and Citi also advise on plenty of M&A and debt deals.

Among the elite boutiques, Centerview is the clear standout for advisory work on the biggest M&A deals in the sector, but the others all have strong practices in this area.

Solomon Partners, formerly known as PJ Solomon, also stands out for its work on notable consumer retail deals, but it’s not normally considered an “elite boutique.”

And dozens (hundreds?) of other boutique banks have a strong presence in consumer retail, even if they do not specialize in it.

Since this sector is diverse, your exit opportunities are also quite broad.

If you want to position yourself for the private equity mega-funds, you could aim to work on large-cap M&A deals at a bulge bracket or elite boutique.

If you’re more interested in venture capital, you could advise EV companies on their plans for world domination.

And if you want to work in the distressed, restructuring, or turnaround space, you could advise troubled offline retailers.

Plenty of hedge funds are active in the space, and you’ll see strategies ranging from merger arbitrage to long/short equity to activist/turnaround to credit.

Corporate development and corporate finance are viable paths, as is staying in banking to advance up the ladder.

The only real “downside” to exit opportunities is that you may not be the best candidate for every role.

For example, if you recruit for VC, you’ll be at a slight disadvantage next to someone who worked in the tech, healthcare, or TMT groups.

Some good information sources include:

Is the Consumer Retail Investment Banking Group Right for You?

Since consumer retail investment banking spans a wide range of industries and gives you exposure to all deal types, it’s hard to point to any real downsides.

You won’t get pigeonholed by working in the group, and although some verticals within it are economically sensitive, plenty of others are not.

Therefore, even if deal activity in one area falls off a cliff, you could become busier by moving to another team within the group.

The main downside is that banks are strong in different verticals, and there isn’t necessarily a way to discern your group’s strengths before you sign an offer.

So, don’t join the consumer retail group expecting that you’ll instantly become an adviser to EV companies and buddies with Elon Musk.

You could easily end up advising discount retailers or toilet paper companies.