Is Finance a Good Career Path? The 2023 Update

If you want to stimulate the urge to poke out your eyes and jump into a pool of lava, try searching for “Is Finance a Good Career Path?” or asking ChatGPT about it.

The missing point is that a “good career path” implies something about the industry’s prospects over the next 10-20 years.

I’m going to take a broader view than in previous versions of this article and focus on one big question:

Finance careers became highly desirable from 1980 through 2020. Will they continue to be as desirable or more desirable over the next 10-20 years (through 2040)?

Definitions: What is “Finance,” and What is a “Good Career”?

But I will focus on roles where you advise companies on large deals or invest in companies (IB, PE, HFs, and VC) because that’s this site’s focus; addressing every possible finance career would turn this article into a novella.

A “good career” is harder to pin down, but I would define it as one where the benefits significantly outweigh the costs and where the benefit vs. cost profile stays favorable for the next 10-20 years.

Most people have traditionally viewed finance careers as high-cost but high-reward.

It’s extremely difficult to break in, but once you’re in, the compensation and exit opportunities make the initial effort worth it.

And yes, it’s difficult to advance, but the rapid growth in compensation as you move up more than offsets that difficulty.

Top performers can earn $1 million+ per year (or more), and even if you “get stuck,” your firm doesn’t do well, or you end up in a bad group/role, you could still earn in the mid-six-figure+ range.

Yes, these numbers are (much) lower outside the U.S., but no matter where you live, you could earn multiples of the median household income in your country.

But will this continue going forward?

To answer that, we need to consider the costs and benefits and how they might change.

The “Costs” of a Good Career: Recruiting and Advancement

At a high level, recruiting into finance roles hasn’t necessarily become “more difficult,” but it has become more annoying and error-prone due to:

Interviews have allegedly become more technical, but I think this change may be slightly overstated.

For example, I spoke with a senior banker involved with the recruiting process at a large bank a few months ago, and he mentioned that candidates’ technical skills have been getting worse – despite the plethora of courses, guides, and resources out there.

The advancement side is a mixed bag.

It’s probably a bit easier to move up from the Analyst level to mid-level roles at banks, but it’s more difficult and random to move into many desirable buy-side roles, such as private equity.

Factoring in everything, I don’t think recruiting and advancement have worsened too much, but they have become less favorable for non-traditional candidates.

Bankers are creatures of habit, so I’m not sure these areas will change significantly over the next 10-20 years.

If anything, recruiting might become less automated and switch to more in-person/on-site evaluations due to AI tools that could trivialize remote testing.

The more interesting parts of the “Is Finance a Good Career Path?” question are the benefits.

In other words, will the high compensation and exit opportunities continue?

Finance jobs have always paid more than ones at normal companies, but this premium was much lower in the 1930 – 1970 period (source: “Since You’re So Rich, You Must Be Really Smart”: Talent, Rent Sharing, and the Finance Wage Premium): 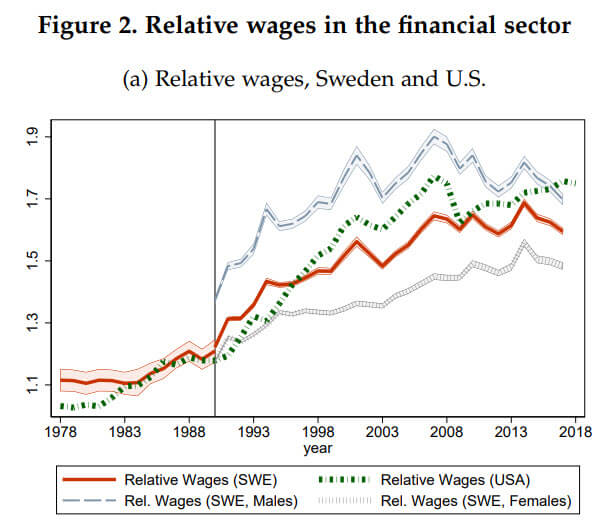 Finance careers were still desirable, but people were not killing themselves to win entry-level positions in quite the same way.

Everything started changing in the 1980s, and by the end of the decade, many students at top universities had “become interested” in finance 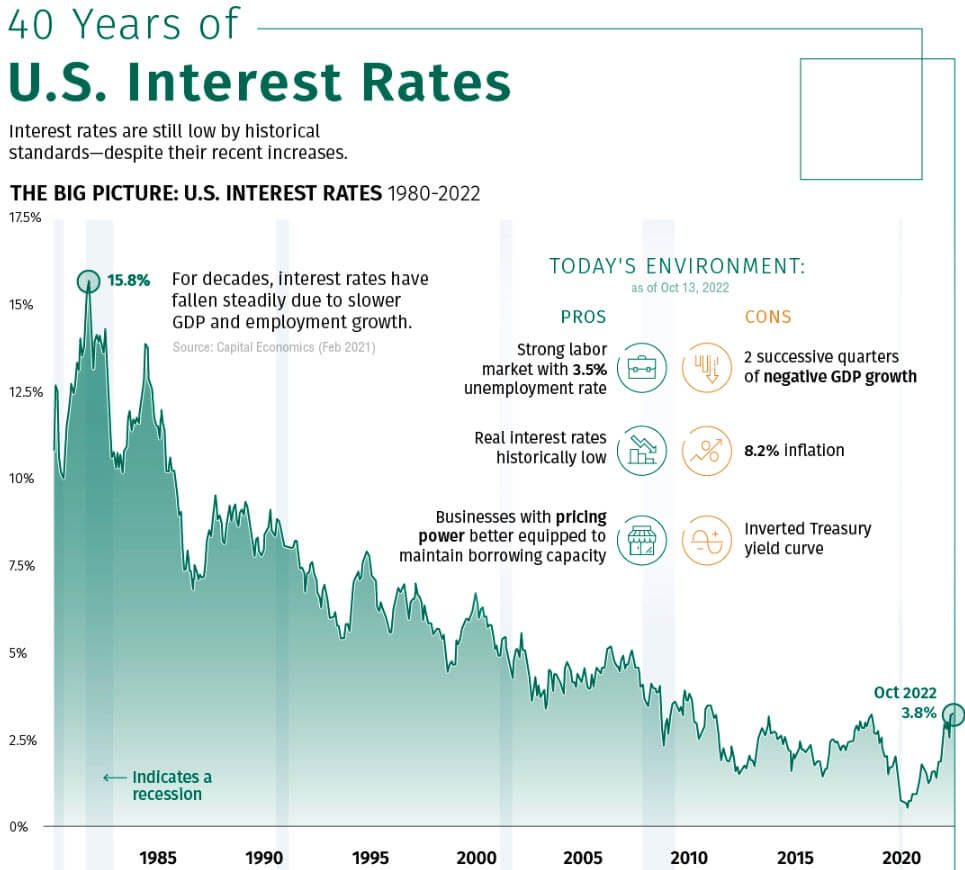 2) Deregulation and a Decline in Antitrust – With less regulation and antitrust scrutiny, dealmakers could put together huge mergers more easily, resulting in higher fees for bankers, more potential exits for investors, and more demand for entry-level workers.

3) Emerging Market Growth – As places like China grew rapidly and became manufacturing hubs, the West outsourced much of its manufacturing capacity, heavily favoring the managerial/professional class.

4) Favorable Demographic Trends – The world population grew from 4.4 billion in 1980 to 7.9 billion in 2020, which meant more consumers, companies, and markets. Some countries aged considerably (Japan), but huge emerging markets, such as India, remained quite young.

5) Technology and Automation – Automation in this period mostly affected jobs in industries like manufacturing that did not require university degrees. White-collar work was spared because tools like AI had not yet advanced enough to “replace” office workers.

6) Low/Stable Inflation and Energy Prices – After inflation surged in the 1970s, it relented over the next few decades and remained relatively low/stable, at least up until 2021, which led to more visibility for businesses and significant growth enabled by cheap energy (see: Germany and Russia).

Bankers today would still earn a good amount if they time-traveled back to 1970, but they would earn a lower premium over the median household income because these macro trends had not yet played out in full.

Why the Macro Environment is Now Much Less Favorable for Finance

Over the next few decades, I believe that most of these factors will reverse or diminish, which means that the “finance wage premium” will decrease by some percentage.

Interest rates are now higher than they were in the 2010s, but they’re still low by historical standards, and they cannot possibly fall from 15%+ to almost 0% once again.

Interest in regulation and antitrust is increasing in Europe and the U.S., which we’re seeing with the FTC’s more aggressive approach toward Big Tech and its blocking of mega-deals.

Demographic trends will be much less favorable in the future, with China’s population now declining for the first time in decades and rock-bottom birth rates in many developed countries.

Yes, Africa is still growing, but I don’t think that will offset the declines everywhere else.

And automation is now at the level where it can threaten white-collar jobs; even if it doesn’t “kill” jobs, it could reduce their future growth potential.

Finally, energy prices and inflation will be much more volatile going forward, partly due to the ESG craze and partly because traditional fossil fuels are also getting more expensive to extract.

And as demand for minerals to power the “energy transition” picks up, expect more geopolitical conflicts and controversies in mineral-rich regions.

And before you say, “OK, no problem, I’ll just go into tech instead!” remember that all these factors also negatively impact tech companies.

Everything on this list helped Big Tech just as much as it helped the finance industry, so expect tech to be negatively affected as well.

You might look at these factors and say, “OK, but central banks will cut interest rates eventually… and maybe regulation and antitrust will die down again… and inflation will eventually fall back to 2%.”

And who knows, maybe automation and AI tools will go the way of Napster and run into legal problems that delay their progress.

So, I might be wrong on some of these, but other trends cannot “go back to normal” anytime soon.

For example, the demographics of China and Western countries cannot change overnight; birth rates might increase eventually, but it will take a generation or more to see the results.

And even if a new technological breakthrough makes energy much cheaper and more reliable (e.g., nuclear fusion), it will take decades to see the full realization.

The bottom line is that I don’t think the finance industry will “crash,” but I also don’t think its prospects will improve over the next 10-20 years.

My far-in-the-future-and-likely-to-be-wrong predictions include the following:

OK, So What Does All This Mean for You? Is Finance a Good Career Path?

The short, simple answer is:

Yes, finance is still a good career path, but it will probably not be as good relative to other careers as it has been over the past few decades.

If you are at a top university or business school, have the qualifications, and start early, that’s fine.

The industry may not deliver what you expect, but you can always take the skills and move into a different role.

On the other hand, if you’re a non-traditional candidate, you probably don’t want to put all your eggs in the IB/PE/HF/VC basket.

The benefits may not outweigh the costs if you’re in this position, especially if you start recruiting at the wrong time.

Unfortunately, I’m not sure there’s a clear “better” alternative.

People may point to tech, renewables, biotech, space exploration, or various other fields, and they all have some advantages and disadvantages vs. finance, but I don’t think any one “wins” in all categories.

If you’re a non-traditional candidate and you still want to do something related to finance, I strongly recommend considering the “side door” and “back door” options – commercial real estate, corporate banking, corporate finance, etc. – rather than fixating 100% on IB roles.

Your end goal should still be to become “financially independent” via high income from a job, a side business, or your own company.

So, I’d still recommend the same steps as in previous years: get 1-2 finance internships early in university, see if the industry is for you, and if not, test other options.

Focus on gaining useful skills that are difficult to automate, such as human-to-human sales, and decide within a few years if you’re on the “career ladder” path or if you’d rather develop a side project, business, or another income source.

The main difference now is that it’s more important to diversify because the finance career path will be less predictable in the future.

I expect that “average compensation” figures will span increasingly wide ranges and fluctuate significantly from year to year, so you won’t know you’ll earn $A at Level X or $Z at Level Y.

And no matter how committed you are, you don’t want to depend on a single income source in a much more volatile environment.

Even if you pick a single career, you want to be financially secure enough to feel comfortable quitting, taking a break, and doing something different.

Fortunately, finance is still a good career path for building up that nest egg.