Will ChatGPT and AI Kill the Investment Banking Industry and Other “Knowledge Worker” Jobs?

Unless you’ve been hiding under a rock, you probably noticed the excitement, hype, and borderline panic when ChatGPT from OpenAI was released in November 2022.

If you haven’t yet created an account or tried it, you should – because it is quite impressive.

You can ask the tool almost any question, and it will generate text or computer code in response (with some restrictions).

The technology behind it is too complex to explain fully here, but it uses supervised/reinforcement learning and all the data on the Internet (as of 2021) to generate text based on statistical probabilities (Wikipedia has a good summary).

Some people have predicted that ChatGPT and similar artificial intelligence technologies will destroy all white-collar jobs, others have predicted massive changes but no job destruction, and others are still unconvinced by the technology.

This leads us to the possible impact on investment banking and other finance-related roles.

I’ve used ChatGPT over the past few weeks as I’ve been working on a macro package for a new version of our PowerPoint course (coming very soon).

In some ways, it has been very impressive; but it has also wasted time and led me down rabbit holes.

So, I’ll take a “centrist” approach here and explain my findings and predict how it might affect recruiting, the job itself, and even education at all levels:

My Take on ChatGPT and Other AI Tools: The Short Version

If you ran this article through ChatGPT and asked it to write a summary, here’s what it might produce:

I’ll expand on these points below, but I want to start with the results of my own testing:

My Results from Using ChatGPT for Finance and Coding-Related Questions

While I was working on various VBA macros in PowerPoint, I tried using ChatGPT to write and explain existing code.

It was useful to create a “rough draft,” but it kept making obvious errors that a human could detect in a second.

It functioned as a refined/faster version of Google search because I could type in natural questions and get the answers directly in text rather than poring through search results.

I found ChatGPT more useful for explaining code than for writing it.

Let’s start with a quick example of simple VBA code that it explained fairly well: 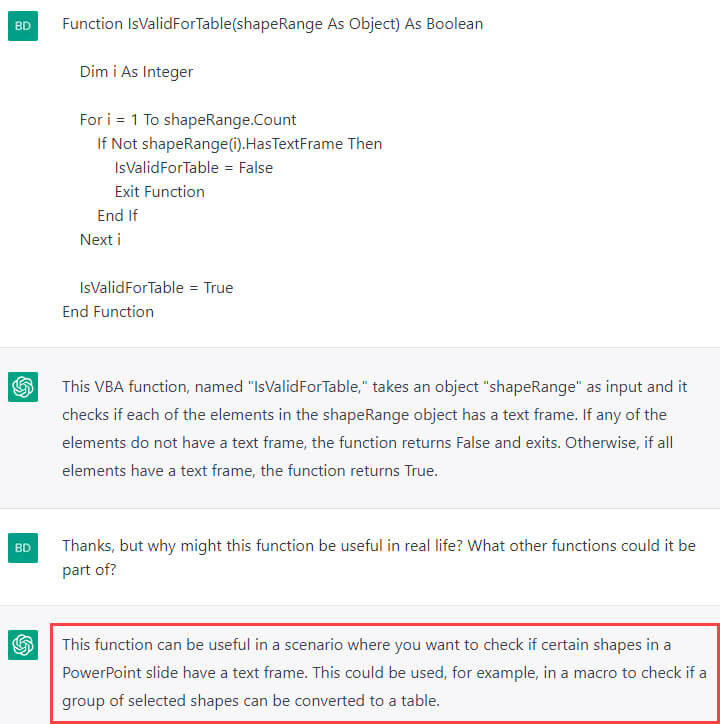 It also performed decently when I asked it to write simple functions: 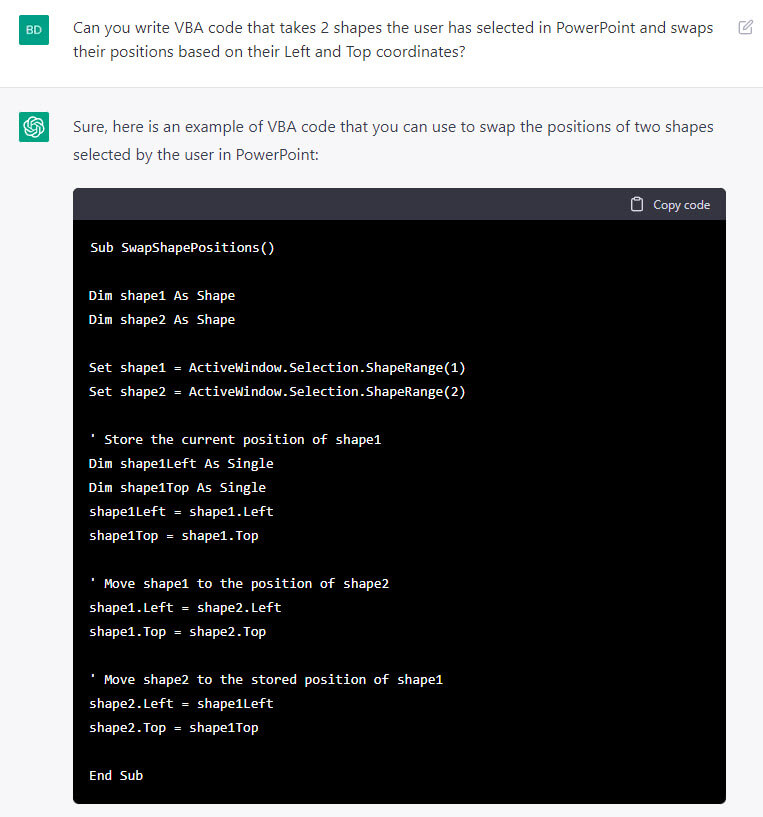 This code is incorrect because it doesn’t check for various errors, such as the user not having 2 shapes selected, but it’s a decent start.

On the other hand, ChatGPT also led me down rabbit holes that went nowhere.

I won’t paste in the full dialogue and code here, but, in short: I was having some trouble with a “Copy and Paste Table Formatting” macro and asked ChatGPT for help.

It wrote code that seemed reasonable but which was based on functions that did not exist in VBA, so it solved nothing.

I pointed this out, and it kept suggesting alternatives that also didn’t work. So, it cost me time, and I eventually resolved it by writing code to copy and paste specific formats on a per-cell basis.

I also asked ChatGPT about the revenue drivers for a steel manufacturing company: 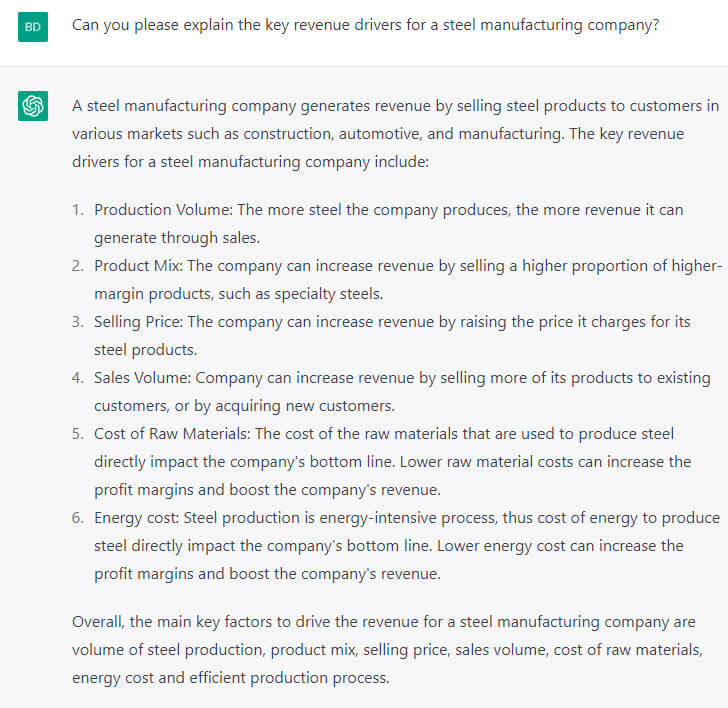 It’s missing a few things, such as CapEx to determine the production capacity, but it’s a decent response.

I then asked it to build a full Excel model, which it could not do, but it did offer a simple outline: 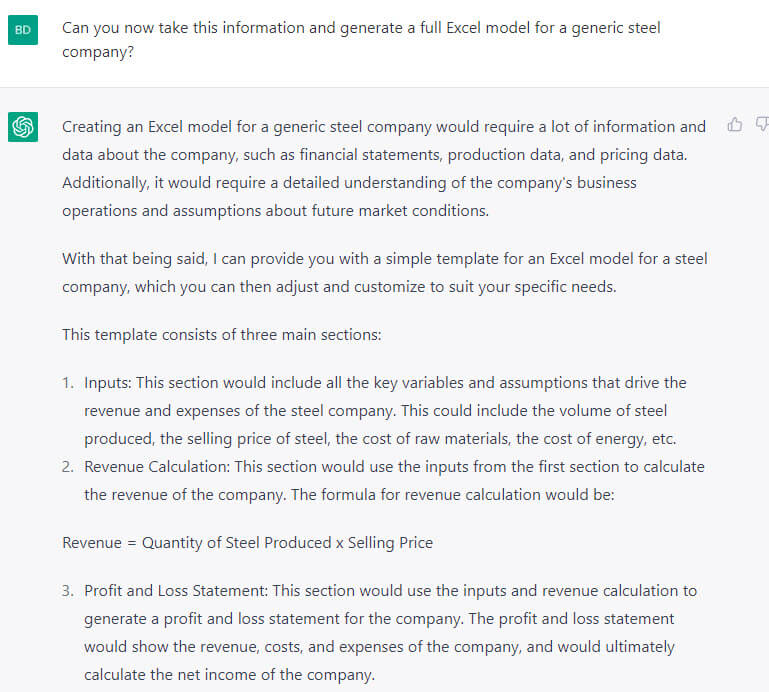 Again, it misses some critical factors, such as the relationship between CapEx, cash flow, and production capacity, but it’s decent if you have no idea where to start.

On the other hand, it cannot scan an investor presentation and 10-K and tell you what to do, and it cannot produce anything outside of text/code.

The Limitations of ChatGPT and Other AI Tools

Many people have pointed out that ChatGPT often generates coherent, impressive-sounding answers that are completely wrong.

As they’ve rightly observed, ChatGPT does not “understand” concepts in the symbolic/abstract way humans do; it simply predicts the next word in the sentence.

These are both problems, but another issue is that it cannot do the work.

In other words, even if you ask it to write code for you, it can’t insert the code into a production environment, run it, test it, find bugs, and tell you what needs to change.

It also can’t interview customers, find sources on the ground, or call a friend who knows the obscure details of a specific technical problem you’re facing.

Future versions of these tools might improve these integration issues, but I don’t think AI will be capable of “interviewing” humans in real life anytime soon.

First, it may become harder to contact people and get responses because they’ll be even more inundated with email spam generated by these tools.

Many finance professionals already get a lot of requests for informational interviews and advice, but most of these requests are poorly written and impersonal.

With ChatGPT, students will put in even less effort, but now their emails will appear coherent.

We’ve recommended email and even LinkedIn messages over cold calling, but that might change as the signal-to-noise ratio worsens.

If that happens, in-person networking via information sessions and weekend trips could become more important and effective.

Second, many methods banks have used to “automate” the recruiting process might backfire.

What’s the value of an online verbal or math test if people can type the questions into ChatGPT and get answers?

Even something like HireVue may become less useful as fake videos generated in real time become plausible.

I predict that banks and PE firms will move to more in-person, on-site tests and evaluations where Internet and phone use is disallowed.

The irony is that banks pushed to “automate” everything and make recruiting impersonal, but due to the advancement of technology itself, recruiting will become more personal.

Of course, I assume that banks care about recruiting high-quality candidates, which is debatable.

What About the Investment Banking Job Itself?

I tried to get ChatGPT to generate an actual Excel model, but it kept refusing:

But if Microsoft ends up investing $10 billion in OpenAI, you can bet that Office integration will be on its way soon.

That said, I’m not sure it matters because almost everything in banking is already based on templates and existing slides and models.

In other words, these AI tools do the same thing your VP or Associate does when outlining a presentation: combine content from other sources.

But in IB roles, most time is consumed not by the “outline” or “rough draft” but by the 78 revisions your presentation goes through as different people make changes.

And the current tools are bad at these types of refinements and small changes; it’s often faster to make the changes yourself than to explain what you want.

Even if they get to the level where they can cross-check every single detail and footnote in a 100-slide presentation, you can bet that bankers will still make humans review it manually.

In terms of IB work products, these tools will probably be the most useful for the confidential information memorandums (CIMs) and “teasers” used to market companies to potential buyers.

Most of these documents have long, boring passages that humans copy and paste from other sources.

AI tools could reduce drudgery by setting up the basic document and letting the human bankers focus on how to “sell” the company rather than finding all the boring parts.

If you’re wondering about higher-level roles in banking, such as Managing Directors, I don’t see these tools changing much anytime soon.

At the senior levels, it’s still a relationship-driven, client-facing business in which the clients pay banks millions of dollars for their full attention.

I don’t think the CEO of a $50 billion company would be satisfied if he asked for advice on an acquisition and the MD brought in a chatbot to answer his questions.

Some serious legal/regulatory/compliance issues might also prevent these tools from being widely adopted in banking.

For example, if the content in a CIM or teaser is generated based on leaked documents or random comments on Reddit, can banks be held liable if the information is wrong? Would OpenAI be subject to a lawsuit?

What would compliance departments say? And will they have to start scanning documents to find AI-generated text?

The bottom line is that AI and language models will impact IB and other finance roles, but I expect less immediate impact than in areas like the news, marketing/copywriting, digital art, and even routine programming.

I don’t necessarily think the technology will “kill jobs,” but it may constrain their growth.

The bigger threat for finance is an unfavorable macro environment, like the one we’re currently in.

I was listening to a podcast last week where the hosts predicted that ChatGPT would change the world more in the next 5 years than the Internet has in the past 30 years.

I agree this is possible, but there’s also a huge range of outcomes and, therefore, significant uncertainty.

If you work in an office doing “knowledge work,” all these tools must be on your radar ASAP.

But I don’t think you should avoid industries or careers due to AI because there’s no telling how everything will play out.

If you want to reduce your risk, aim for jobs with significant client interaction and tasks that require precision.

No job is “safe” from AI, and all industries will be affected by ChatGPT and its successors, but it’s premature to conclude that The Matrix will be the result.

On the bright side, these tools might reduce investment banking hours and let you handle those 3 AM emergency requests more easily…

…but they could also do the same thing Excel did decades ago: allow senior bankers to request more work in the same amount of time.

Either way, I’ll be eager to accept the new AI overlords if they can format Excel files more efficiently than my current macro.