The Front Office, Middle Office, and Back Office: How Banks Organize Their Dungeons

The debate about the front office, middle office, and back office in the finance industry is one of the sillier and more exhausting ones.

If you look online, you’ll find many threads, articles, and blog posts saying that back office (BO) and middle office (MO) jobs are “the worst” and that if you end up there, your career is over.

People say these roles pay less, offer boring/repetitive work, and do not give you many exit opportunities.

Oh, and most importantly, you won’t get any respect if you’re in one of them.

There is some truth to these complaints, but I don’t think they’re 100% accurate.

The key problem is that terms like front office, middle office, and back office are so vague that they lump together completely unrelated jobs.

Yes, if you’re working at a large bank, it’s generally best to be in a “front office” (client-facing) role.

But as you’ll see, there’s a huge range of jobs within each category, and some roles that are technically classified as middle or back office are potentially better than some front-office roles:

The Traditional Definitions and Examples of Front Office, Middle Office, and Back Office Jobs

Saying that you work in “the front office” of a technology company or a marketing firm makes little sense – or, at least, it means something different from the definitions in this article.

Here’s a visual with some of these terms and jobs but not everything: 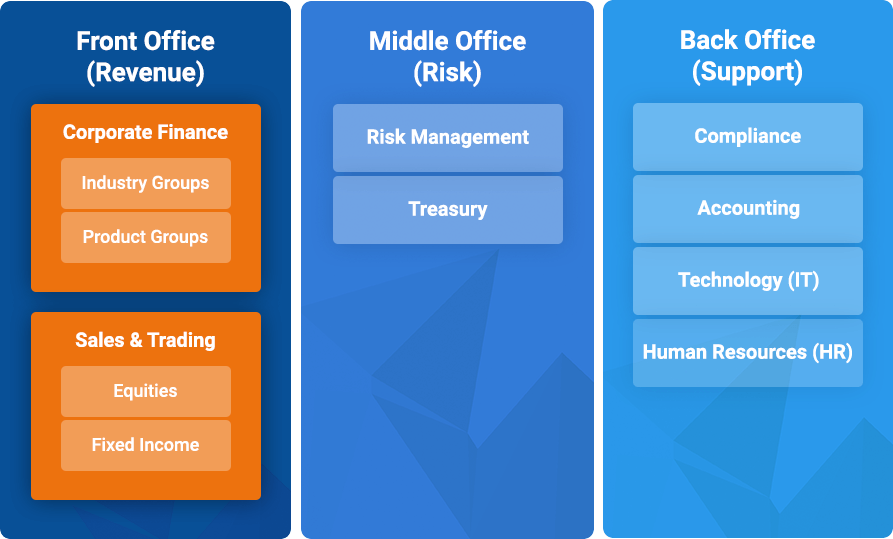 The distinction between “back office” and “middle office” is murky, and you’ll see the same jobs put in different categories, depending on the bank.

You’ll generally see much higher percentages of the total employee base in BO and MO roles at the large banks because there are more processes and bureaucracies to support.

Before moving on, I want to point out the inconsistencies in these definitions:

In short, these categories are rough guidelines.

You should not spend hours figuring out where your internship or job fits into these divisions.

Instead, you should focus on the specific job, its pay, the skill set, and common career paths and exit opportunities.

How the Front Office, Middle Office, and Back Office Compare

Most people argue that middle and back-office roles are worse than front-office roles for the following reasons:

This list sounds quite negative, but there are some benefits as well.

For example, you’ll have far more free time in many BO/MO roles, including downtime at work and the ability to go home at a normal hour.

Also, if you’re at a large bank, you get the branding benefit of that bank’s name.

Finally, if you make it to the top levels, working as an MD in a middle or back-office role can be a fairly cushy gig.

You earn only a fraction of what MDs in investment banking earn (low-to-mid six figures?), but your stress levels and hours are lower, and you’re managing others rather than doing repetitive data entry.

Should You Avoid the Back and Middle Office At All Costs?

Despite what the internet says, I don’t think you need to avoid back and middle office roles like the plague in all scenarios.

But to be clear: if you are an ambitious university student or recent grad, and you want to work long hours in a challenging, high-paying job with the potential to become a millionaire by your 30s, you should avoid full-time jobs in the back and middle office.

But if that’s not your goal, or you’re not sure of your goal, here are a few cases in which BO/MO roles could make sense:

Let’s say you’re in Year 1-2 of university and you’ve already completed 1-2 off-cycle internships at boutique IB or PE firms, or you have an internship lined up.

If you win a back- or middle-office offer at a large bank in the summer after Year 2, it might make sense to accept it.

…but if you can’t win anything like that, it’s a fairly good offer because you’ll have the combination of a boutique internship for relevant experience and the brand name of a large bank.

And you can easily explain your motivation in interviews (“relevant experience + learn how large banks operate”).

Even if you don’t want to accept an MO or BO role, you could still apply for them, interview, and use trips to financial centers to network for other roles.

Case #2: The Quant or Coder

If you’re a quant, it’s almost always best to work at a solid quant fund where your pay is directly linked to the profits you generate.

But at large banks, the lines between “front office” and “middle/back office” quants are not always clear.

Since prop trading at banks is heavily restricted, many quants do model validation and risk management, which are not considered front-office work.

But these roles still pay quite well and allow you to move into other quant roles at the bank or hedge funds and prop trading firms.

Also, some “middle office” quant projects can generate profits for the bank, so it’s not fair to put these roles in the same category as HR or operations.

Market and credit risk are among the best “middle office” roles, especially since you can potentially move into sales & trading from them.

The key difference is that these roles tend to be close to the transactions, which means more interaction with front-office staff and a higher probability of influencing their P&L.

Also, you could use this experience to move into risk management roles at hedge funds, prop trading firms, or even normal companies that need to hedge their FX and commodities exposure.

You’ll still earn less than traders and salespeople who perform well, but in the U.S., you’ll start above $100K in total compensation and move up to the low-to-mid six-figure range as you advance to the top (source: see the Selby Jennings or Barclay Simpson surveys – summary of older numbers here).

Let’s say you started in a division of a large bank, didn’t like it, but networked your way around and got an offer to join the corporate strategy team.

This role is not considered “front office,” but it’s far more desirable than operations or accounting in terms of pay, skill set, and exit opportunities.

You can use this job as a springboard to move into related strategy roles at normal companies or even management consulting – MBB may be a stretch, but other consulting firms are doable.

Case #5: The Side Gig Hustler

Let’s say that you have no desire to stay in the corporate world and move up the ladder.

You want to start a business or side project that earns money, but you currently have nothing up and running – so you need a salary and free time.

In this case, it’s legitimate to accept an MO or BO role for the paycheck, stay there while you work on your projects, and take advantage of your free time to progress.

Just make sure you get your projects up and running quickly, or you might get stuck in your job due to the favorable compensation/effort ratio.

The Front Office, Middle Office, and Back Office: The Best of the MO and BO

My summary would be: Get close to the transactions (market and credit risk) or gain access to front-office staff and senior management (investor relations, strategy, etc.).

Other good options include treasury (similar to treasury in corporate finance for normal companies but geared toward a bank’s liquidity requirements) and technology.

Some banks, such as BAML and JPM, also have good corporate finance rotational programs (“FLDP” or “Financial Leadership Development Programs”).

And if you can find a legal role that deals with high-level issues – not basic compliance – that can also be good.

These roles all tend to pay more and have more competitive hiring processes as well.

The roles to avoid include operations/reporting, accounting/audit, HR, and the “fixing computers” variant of IT.

What If You End Up in the Back or Middle Office?

First, note that it is not the end of the world if you end up in one of these roles.

All it means is:

Your best options for leaving depend on the role you’re in vs. the one you want.

If you’re in a risk role, the transition to sales & trading, prop trading, or a corporate with hedging needs is the most realistic path.

For quant/tech roles, you should have many options if you’ve performed well and do even a bit of networking (quant funds, Big Tech, startups, etc.).

If you’re in operations, IT, audit, or HR, transitioning to a front-office role will be much more difficult.

You’ll probably have to use some combination of the following to do it:

The key point is that you need to act quickly because the longer you stay, the harder it will be to move.

If you fit one of the cases described above where BO/MO roles could be useful, that might not be a big deal.

But if you’re dreaming of much larger paychecks and client-facing work, act quickly, or you’ll be dreaming for a long time.