Analyst to Associate: Should You Stay in Investment Banking and Grind Your Way Up? 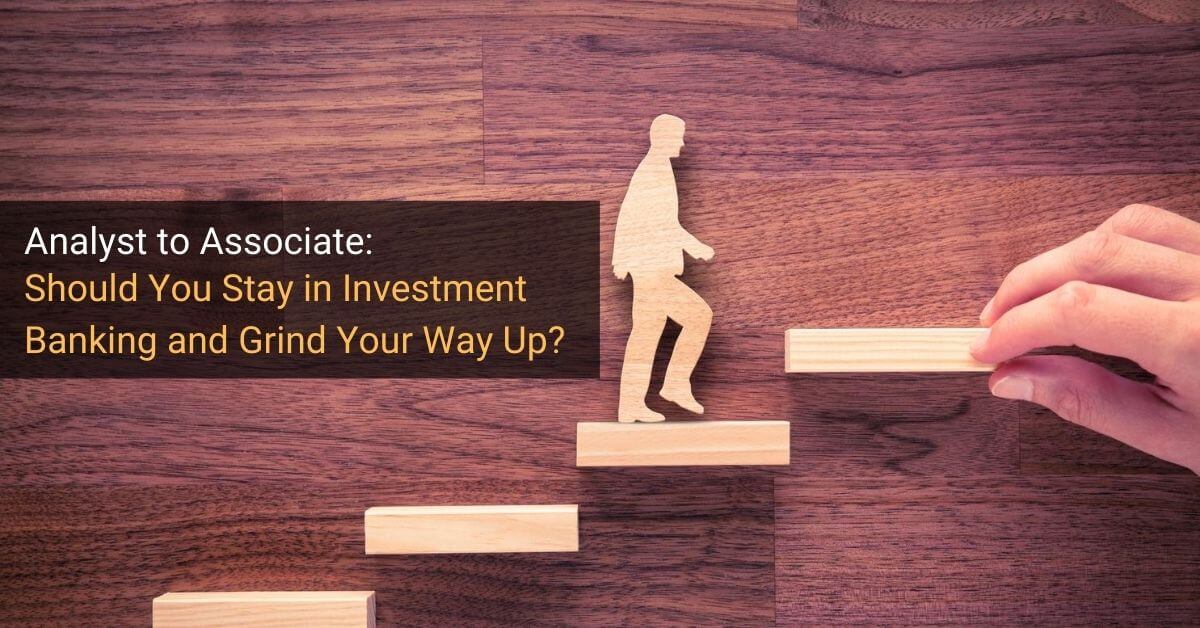 In a status-crazed world, few things inspire as much status comparison, fear, and insecurity as the direct promotion from Analyst to Associate in investment banking.

If you were to accept this type of promotion, some would call it a “failure,” assuming that you could not win a private equity or hedge fund job offer.

Others – especially anyone who went to an expensive business school to win the same job – might be jealous since you reached this level with much less time and money spent.

As usual, reality lies somewhere in the middle.

I normally start these articles by explaining the process of winning the promotion or job before discussing its advantages and disadvantages.

But in this case, you need to think about the trade-offs first because winning the promotion may be easier than making a decision about it:

Wait, What? Who in Their Right Mind Would Stay in This Miserable Industry?!

Many people enter investment banking specifically for the exit opportunities.

Starting an IB Analyst job is a bit like walking across hot coals: you’re going to suffer a lot, so whatever’s on the other side better be good.

Who would want to stay in investment banking and advance up the ladder?

But several trends over the past 10-15 years have made this path more appealing:

The large private equity firms start recruiting almost as soon as you begin working as an IB Analyst – for roles that begin nearly two years in the future.

You won’t have “deal experience” by then, and if you also don’t have much experience from your internships, you might not have a realistic shot at winning these roles.

Not every buy-side role recruits that early (hedge funds are still more off-cycle), but it’s still easy to miss the process.

As a result, you may end up staying for another year at your bank and eventually accepting an Associate promotion there as well.

Increasingly, banks have been encouraging Analysts to stay and become Associates by offering more time off, “protected weekends,” and faster promotions.

Yes, your life will still be pretty bad as a 1st or 2nd Year Analyst, but it becomes more reasonable after that.

You’ll already know the job, so there won’t even be much of a learning curve once you become an Associate.

Finally, you may not even need to be an Analyst for three years since some banks offer promotions after 2.0 – 2.5 years now.

If you’re an international student in the U.S., you could win an offer at a large bank that can afford to sponsor your visa, or you could go through the OPT program if you did a STEM degree.

But those options don’t exist in the same way for buy-side roles.

Many private equity firms and hedge funds are tiny compared with the bulge bracket banks, and they’re often reluctant to hire international candidates because of these visa issues.

So, your exit opportunities may be more limited: stay in IB or move to another large company that can sponsor you.

4) Banking Isn’t So Bad from a Risk/Reward Perspective

Yes, much of the work is mindless, and deals become boring once you’ve worked on enough of them.

But let’s be honest: most people in finance do the job for the paycheck.

And if you stay on to work as an Associate, you could easily earn more than you would in an entry-level PE or HF role – especially if that role is at a smaller fund.

Yes, mega-fund PE Associates earn more, but your chances of winning those roles are tiny.

Also, since a large bank is unlikely to “blow up” or “shut down,” your earnings will be more stable at a bank than at a smaller buy-side firm.

5) Exit Opportunities May Not Be Widely Available in Your Country

In many countries outside the U.S., there are barely any hedge fund roles, and even private equity and venture capital roles are few and far between.

Australia and New Zealand come to mind as examples of countries with decent amounts of investment banking activity, but relatively few buy-side roles.

But you see similar patterns in many emerging and frontier markets.

So, if you’re in a region where the main options are “stay in IB” or “move to corporate development,” then staying in IB could be your best alternative.

6) You’ll Have More Time to Figure Out Your Plans

Very few students walk into IB knowing exactly what they want to do over the next 5-10 years.

Sure, you can BS your way into a nice-sounding story, but the reality is that you probably don’t know.

If you stay for the Associate promotion, you’ll have more time to speak with people in different industries and assess your options.

You can also focus on roles that use off-cycle recruiting, so you can take the time to gain solid experience first.

Exit opportunities as an Associate require more effort on your part, but they’re not impossible.

And the Case Against the Analyst to Associate Promotion

Those are some of the best reasons to consider staying as an Associate if you’re given a chance to do so.

Now for the counter-argument:

1) Many Exit Opportunities Are More Interesting, Offer a Better Lifestyle, and/or Pay More

And even ones that pay less, like corporate development, are still more interesting and offer better hours than IB.

There are downsides to all the popular IB exit opportunities, which we’ve covered ad nauseam, but they’re still seen as better for most people.

Investment banking becomes more interesting at the senior levels, but you’re going to have to grind for many years to get there.

2) You Could Easily Get Burned Out

Yes, the hours and lifestyle have improved over time, but IB is still a demanding job that requires you to be “on” at all times, ready to respond to urgent messages.

And if you’ve already been doing it for 2-3 years, you’re more likely to burn out than an Associate who just took a vacation at business school.

Anecdotally, it seems like post-MBA Associates are also more likely to reach the top, judging by the percentage of Managing Directors who have MBAs.

3) Others May Not See You Differently, Even if Your Title Changes

If you go from a 2nd Year or 3rd Year Analyst to an Associate, your day-to-day life may not change much.

You’ll still spend time reviewing and guiding the Analysts below you, and you’ll communicate with clients, VPs, and Directors more often.

Other people may not even realize you’ve been promoted until they see your new title in an email signature.

The job changes as you become a 2nd, 3rd, or 4th Year Associate, but there may not be an immediate night-and-day difference.

So, you shouldn’t assume that this promotion will deliver “instant relief.”

4) Skipping an MBA Could Hurt You in the Long Run

While it’s fun to point to the absurd cost of top MBA programs and ask whether or not they’re worth it, they do offer some advantages.

You’ll learn more about other industries and careers firsthand, you’ll build a wider network, and you’ll develop your “soft skills.”

The last one, in particular, is important for a long-term career in IB because the job shifts to managing people and clients past a certain point.

Plus, being able to cite a top MBA program always helps because many CEOs also attended such programs, which gives you an instant connection to them.

5) You’re Signing Up for More of a “Career” Role

If you become an Associate, most banks expect you to stay for the long term and advance up the ladder.

Yes, some post-MBA Associates do switch into other fields, but you may find it more difficult as an Analyst-to-Associate promote because the first question in any interview will be:

“Why did you stay in investment banking for X years and accept a promotion if you wanted to pursue a different career? Why not leave earlier?”

The Logistics of Analyst to Associate Promotions

At some banks, you’ll need a promotion to 3rd Year Analyst first.

But other banks may promote you more quickly, especially if you’ve been in the “top tier” since starting.

Regardless of the number of years required, though, the promotion criteria are similar:

Much of the third point depends on going above and beyond your assignments.

For example, instead of just reviewing a younger Analyst’s work, improve it by thinking of better comparable companies, a better way to present the model, or new potential buyers.

It’s not that hard to get promoted if you’re above average because the best Analysts usually leave, even though banks want them to stay.

So, your chances are decent if you’ve earned above-average bonuses during your time there.

If you’re up for promotion, they’ll approach you midway through the year and ask about your plans before offering it.

How to Succeed After the Promotion

You’ll need to become much better at multi-tasking and juggling different projects: reviewing someone’s model, responding to a client request, updating your VP, and so on.

You’ll still be doing some of the work, especially for presentations and pitch books, but it becomes more of a “communications job” (and even more so at the VP level).

If you’re a direct promote, you can’t “practice” these skills in advance, but you can try to prepare by asking for more responsibilities on deals and offering to mentor new hires.

The more you move away from “doing the work” and toward “managing and communicating with others,” the more prepared you’ll be.

For more on this one, see our guide to communication skills in the finance industry.

Analyst to Associate: Take the Bait?

In some cases, yes, you may have to accept a direct promotion because you failed to win a private equity or hedge fund job offer.

But that’s not always the case – especially if you’re an international student or you decided on IB “late” and have less deal experience than others.

If you accept the job, you’ll still be better off than ~99% of the population in terms of income and advancement potential.

You’ll also learn that outside of your co-worker bubble, hardly anyone cares about your career.

Most people in real life don’t even know the difference between retail banking and investment banking, let alone the nuances of Analyst vs. Associate roles.

Overall, the Analyst to Associate promotion makes the most sense if:

If that’s you, ignore the negative comments about this promotion and embrace the grind up the ladder.