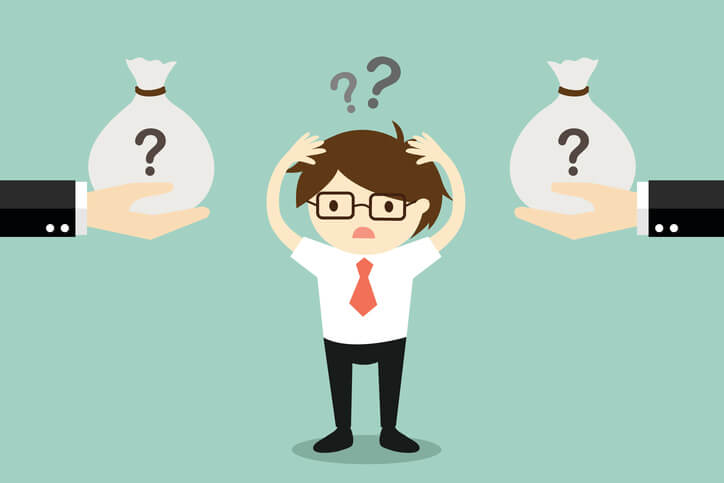 A long time ago, I wrote an article about private equity vs. venture capital – and many other sites not only copied the ideas, but also took direct quotes without attribution from the article.

But the joke is on them: because of this lack of critical thinking, much of their information is now wrong or incomplete.

Just as the distinction between public and private companies has blurred over time, private equity and venture capital have moved closer over the years.

And you need to understand that before you think about getting into or out of either industry:

Then, both firms invest that capital in private companies or companies that become private and attempt to sell those investments at higher prices in the future.

Both firms charge their LPs a management fee of 1.5 – 2.0% of assets under management (the fee often scales down in later years) and “carried interest” of ~20% on profits from investments, assuming that the firm achieves a minimum return, called the “hurdle rate.”

But beyond these high-level similarities, almost everything else is different, at least in “the classical view” of these industries:

Private Equity vs. Venture Capital: Why the Lines Have Blurred

First, many venture capital firms have moved up-market into growth equity and other later-stage investing.

For example, both Accel and Sequoia, known as some of the top U.S.-based VCs, have raised growth funds of close to $1 billion USD (or more) and now pursue deals worth tens of millions or even $100 million+ via those funds.

At the same time, many traditional private equity firms have moved down-market into growth equity (e.g., KKR has a “Next Generation Technology Fund”).

And then asset managers like T. Rowe Price and Fidelity have also begun investing in growth-stage companies.

So, saying that you “work in private equity” is too general a statement to be useful.

You have to explain your specific group, the strategies you pursue, and which of the firm’s funds you work in.

Finally, many long-held notions about how companies “should” raise capital are no longer true.

It’s completely plausible for a tech startup to raise a combination of debt and equity as it goes from pre-revenue to public company.

And while traditional leveraged buyouts still use both debt and equity, the equity percentage has increased significantly: From less than 10% in the 1980s to 40-50% more recently.

(Sources: This report from Piper Jaffray for older data and PitchBook’s stats for post-financial-crisis deals).

As a result, private equity firms can’t rely 100% on “financial engineering” to generate returns (as articles about this topic often claim).

In light of these changes, we can check which of the generalizations above are still true and which qualify as “fake news”:

VCs do tend to focus on technology and life sciences, and PE firms do tend to invest in a wider set of industries.

However, VCs don’t invest exclusively in those industries.

The data varies from year to year, but small percentages also go into sectors like media and entertainment, energy, and consumer products.

Also, there are some sectors that traditional PE firms avoid: For example, few firms acquire commercial banks because of regulatory constraints.

The points about the typical percentages acquired by each firm type (100%, or a majority stake, for PE and minority stakes for VC) are true.

But the copycat articles on this topic all cite the figure of “$100 million to $10 billion” for private equity deal sizes and “under $10 million” for venture capital deal sizes.

You should take these figures with a grain of salt.

First off, the “under $10 million” deal size applies mostly to Series A rounds (i.e., the first significant capital a company raises).

Once you get into Series B, C, and D, the deal sizes get far bigger.

Also, the average size depends on the industry: Cleantech and life sciences firms tend to raise bigger rounds than software startups because they need more capital.

On the private equity side, yes, the average leveraged buyout in a developed market is in the hundreds of millions USD, but plenty of deals are smaller than that.

Take a look at some of the charts from PitchBook to see – in the U.S., ~25% of PE deals each year are in the $25 – $100 million range. In other markets, that percentage is even higher because companies are smaller.

Finally, deals for over $10 billion have been rare in the decade following the 2008-2009 financial crisis; a “large deal” might be in the single-digit billions now.

We covered this one above, but both firm types have begun doing growth-stage deals, which has changed the traditional risk/potential return profile.  So this one is more of a similarity than a difference.

Nothing has changed for venture capital: returns still depend on growth and companies’ valuations increasing over time.

But things have been trending that way for many private equity firms as well.

When firms use 10% equity to acquire companies, “financial engineering” drives the returns – but when the average equity contribution is 40-50%, EBITDA growth becomes more important.

Plenty of VC firms become more involved with a company’s operations than is commonly thought.

One example is Andreessen Horowitz, which has operational teams that assist executives with recruiting, sales, and marketing.

There are also plenty of private equity firms, especially in the middle market, that focus on operational improvements.

“Operational focus” is not a great way to differentiate PE and VC firms because it varies so much from firm to firm.

At the junior levels, mid-sized and large PE firms do tend to hire mostly investment bankers, while VCs hire a more diverse mix.

But the lines start to blur when you move to the Partner or Managing Director level.

Many PE firms have “Operating Partners” with significant executive experience in a certain industry, and plenty of senior team members in venture capital enter the industry with banking/consulting backgrounds (especially in NY).

There are “on-cycle” and “off-cycle” recruiting processes for junior-level roles.

The difference is that the hyper-accelerated, “on-cycle” recruiting processes apply primarily to bankers working at large banks in the U.S. who want to work at mid-sized-to-large PE firms.

In other regions and at smaller firms, “off-cycle processes” that start later and last longer are more common.

Most venture capital recruiting is also “off-cycle” – even some of the biggest firms take weeks or months to evaluate candidates.

PE and VC firms also look for different qualities in candidates: PE interviews are mostly about your prestige level, deal experience, and ability to crank through modeling tests.

Venture capital interviews are more qualitative, and interviewers care more about your ability to network, bring in deals, build rapport with founders, and understand markets.

It’s true that you do more technical work in private equity, you spend more time coordinating deals, and the work environment is a bit closer to banking.

However, one point that’s often overlooked is that you also spend more time monitoring portfolio companies – which many people view as “boring.”

Another often-overlooked point is that you’ll pass on 99% of deals in both industries.

So, the work and cultural differences may be slightly overstated because you’ll still spend a lot of time reviewing potential investments and turning down most of them in both fields.

No private equity vs. venture capital comparison would be complete without discussing moolah.

There are three main components to compensation in both fields: base salaries, bonuses, and carried interest.

In general, you’ll earn significantly more across all three in private equity – though it also depends on the fund size.

For example, in the U.S., first-year Associates in private equity might earn between $200K and $300K total.

But VC firms might pay 30-50% less at that level (based on various compensation surveys).

To give some more context, in the infamous Ellen Pao vs. Kleiner Perkins trial, we learned that Junior Partners at KP earned a $400K base salary and a $160K bonus, while Senior Partners earned ~3-5x that (due to carried interest).

Those figures are from one of the largest and most successful venture capital firms, so they are not necessarily representative of others.

You might expect that Junior Partner-level pay ($400-$600K) at the mid-levels in private equity at a decent-sized fund.

And past the mid-levels, the ceiling goes much, much higher: people like Steve Schwarzman routinely earn hundreds of millions per year.

The “average” Partner or MD in private equity likely earns in the single-digit millions, but that’s highly variable and dependent on carried interest and firm size/structure.

It’s true that your exit opportunities are more specialized with VC: for example, it’s difficult to go from VC to PE but easier to do the reverse.

But these difference may be slightly overstated.

At the junior levels, most people in both fields tend to stay in those fields, go back to business school, or join a portfolio company (or other normal company).

Hardly any post-banking hires go back into banking, few people join hedge funds, and even fewer people do something completely off the beaten path.

Promotion in both PE and VC is tricky because many pre-MBA Associates roles are not necessarily Partner-track.

Even if you’ve done well and you want to stay at your firm, you may have to move somewhere else or get an MBA to advance.

Private Equity vs. Venture Capital: Which One’s Right for You?

That is the wrong question.

The right question is: “Which one do *you* have a reasonable chance of getting into?”

If you’re in the U.S., you need to be at a bulge bracket or elite boutique in the right group (industry group, M&A, or LevFin), and you must have attended a top undergraduate institution and earned a high GPA there to maximize your chances of getting into private equity.

If you don’t meet some or all of those criteria, you’ll have to use off-cycle processes, network aggressively, and target smaller firms.

The compensation will be lower, but at least you’ll be in private equity.

In other regions, it’s a bit easier to get into the industry because the process is less structured, and there aren’t as many headhunters blocking your path.

On the other hand, you could get into venture capital from a much more “random” background: You don’t need experience at Goldman Sachs TMT, a 4.0 GPA from Princeton, and a Nobel Prize to win an offer.

I’ve seen people get in from consulting, smaller banks, finance/business roles at normal companies, and even engineering roles (upcoming interview!).

If you can network like a fiend, you have good knowledge of tech or healthcare, and you can prove that you can do the work, you have a pathway into VC.

And if you can’t decide, don’t worry: You could always just stay in banking.

If you enjoy suffering, that is.