How to Answer the “Why Our Bank?” Question in Investment Banking Interviews, Assessment Centers, and More 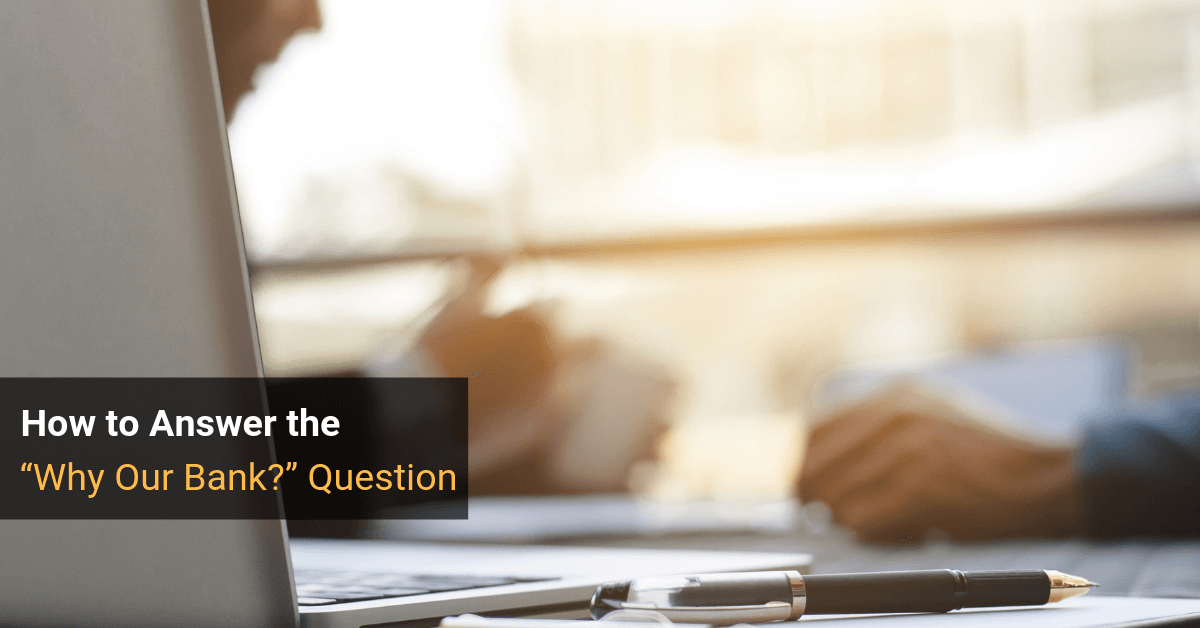 It’s 3:14 AM, your eyes are glazing over, and you really wish this last bank would just ask for your resume/CV and cover letter and stop there…

They have a list of questions for you to answer, somehow believing that they are “special” or “different.”

You look down at this list and want to slap yourself repeatedly as you see the first question:

After having already attempted to answer this one in 17 previous interviews with 12 different banks, you really wish you could just skip over it or that there were some universally “good” answer.

But as with other silly questions, there really isn’t one…

Though there are some foolish answers that you definitely want to avoid.

And then there are incredibly dumb answers, which you really, really want to avoid.

Let’s break it down and see how you can best answer this nonsensical question:

It’s a silly question because most banks are very, very similar regardless of size, location, industry or deal focus, or any criteria like that.

It’s also a dumb question because you’re interested in their bank for simple reasons: because they gave you an interview (or a potential interview) and because finance is a prestigious industry where you can make a lot of money.

A banker asking this question of you is like a supermodel asking Fogell why he’s “interested” in going on a date with her: because she is the most attractive woman that has ever shown interest in him.

As you’ll see below, this question can be more meaningful in other industries where companies are actually… different, but we’re just dealing with banks for now.

Oh yeah, and unlike other dumb questions such as the “greatest weakness” one, there isn’t even a real answer here that differs from candidate to candidate.

But your answer to this question still matters.

If you say something dumb, it could ruin an otherwise good interview and stall your momentum.

And if you say something that’s at least somewhat decent or “less bad,” your answer could confirm what the interviewer is already thinking: that you’re a good candidate to win the offer.

It matters for the same reason that avoiding screw-ups matters for bonuses at the analyst and associate levels in finance: sometimes, the job is more about not screwing up than doing anything right.

Oh, and more cynically: much of what you do in the industry involves BSing people when you don’t have a real answer – whether it’s your MD or a client.

So if you can’t even bluff your way through this question, what hope do you have with well-informed CEOs?

What Are They Really Looking for with This Question?

My snarky opinion on this one is “Nothing” because this question reflects a lazy interviewer more than anything else.

But if I were pressed to give real answers, they would be:

You already know how to do #1, or at least I hope you do, from all the networking coverage on this site.

If you don’t understand how to use tools like your alumni database and LinkedIn to do that, click this link and read everything under “Networking” because I’m not going to repeat it here.

The main point for this interview question is that you need names of specific people, and ideally their locations and titles, if you want to point to your networking efforts in an interview.

For #2, your best source is the WSJ Deal Blog. Go there, type in the name of the bank you’re interviewing with, and you should find some recent stories and deals they’ve advised on.

Getting actual league tables can be tricky and it’s not necessarily a great use of time. If you want a summary view of what different banks are doing, though, check out:

How to Answer “Why Our Bank?” Anyway

“I’m interested in your bank because I’ve met quite a few people there already, including [Person Name 1], a VP in the New York office, and [Person Name 2], a Senior Associate in the San Francisco office, at an information session last month, and I’ve gotten along well with all of them. Also, I noticed you’ve been advising on lots of cross-border natural resources M&A deals lately, like [Company X]’s [$Y billion] acquisition of [Company Z], and I’m really interested in oil, gas, and mining and working on deals there.”

If you’re in Europe and you’re writing this answer during an assessment center or as part of your competency questions, you may have to shorten this response due to strictly enforced word / character count limits, but if you’re reading this article you’re smart enough to figure out how to do that.

But I Haven’t Networked with Anyone There / I Can’t Find Out Anything About the Bank!

If you really haven’t spoken with anyone at the bank before, then no, don’t lie about it and claim that you have. This is fairly easy for banks to detect and it can only hurt you if you make up names, meetings, or informational interviews.

Instead, you’ll have to rely more on research and recent deals that the bank has advised on.

And if you can’t find either of those, then either it’s the most secretive bank in the universe or you don’t know how to use Google.

Remember that banks are sell-side institutions, so they have no incentive to hide the deals they advise on – they want to market themselves.

Claiming ignorance might be a little more acceptable in hedge fund recruiting since so many funds are incredibly secretive, but it’s a poor excuse in IB interviews.

You could use other approaches here, such as talking about how a bank’s “strategy” is different from those of similar banks – expansion into a certain region or a flatter hierarchy, for example – but you need to be extremely certain of what you’re talking about or the interviewer will call you on it.

It’s easier to look up recent deal activity than it is to verify the bank’s “overarching strategy,” so these answers can be riskier.

More interesting is what to avoid when answering this question.

For my own amusement, I searched online for suggestions on how to answer this question just before I started writing this article… and some of the suggested answers were shockingly bad – or sometimes just shockingly mediocre:

If your other interview and/or application answers are good, you have a great story, and you nail your technical questions, stating one of the answers above won’t sink your chances – well, except for #3 maybe – but why leave something as simple as this to chance?

Slightly more interesting variations of this question include “Why our group?” and/or “Why our team?”

The same strategy applies: cite the people you’ve met in this group and the recent deals the group has advised on.

It helps if you have or you do, of course – but you could just say that you’ve met people at this bank or that you know of deals that this bank has done, and then tie your interest back to your work experience and background:

You get the idea.

In Other Settings and Industries…

More broadly, the “Why Our Firm?” question is more interesting and relevant in areas like private equity, hedge funds, and venture capital because… wait for it… those firms CAN actually be different from each other.

Most of these buy-side funds tend to have a specific industry focus, a deal/investment size focus, or, for hedge funds, a specific trading strategy.

Also, while “the culture” is mostly the same at large banks, it can vary tremendously at these smaller investment firms because it’s heavily tied to the PM.

So it’s your job to research these factors in advance – yes, it’s easier for PE and VC – and then link the industry/strategy they focus on to your own experience.

If you’re interviewing for, say, a tech private equity firm but you’ve only worked in the healthcare group in banking before, you just need to be “creative” with your explanation:

“Sure. I’m very interested in technology companies because many of the healthcare companies I worked with relied heavily on new technology and were in the midst of upgrading all their systems, so it impacted me directly and we actually analyzed a few healthcare IT companies. On my own, I’ve also done some investing in my own portfolio in the tech space and, as one of the key growth areas in the economy, it’s especially interesting to me.”

That just explains why you’re interested in tech – after that, you would then go on to state all the usual reasons about why you want to do PE.

The key point is that you should tie your response to something you’ve done in the past, as opposed to a simple “interest” you have.

For example, working on a related deal or researching a related industry or investing all count as “doing” – just “liking” something or thinking it’s “interesting” count as… “not doing.”

It’s the (specific names of) people! And the deals!

And please, nothing about “the culture” or “the smart and hard-working people.”

Unless you want to use the interviewer’s reaction to you as your answer to the “Greatest Failure” question in your next interview, of course.