Book Review: “The Way of the Wall Street Warrior” 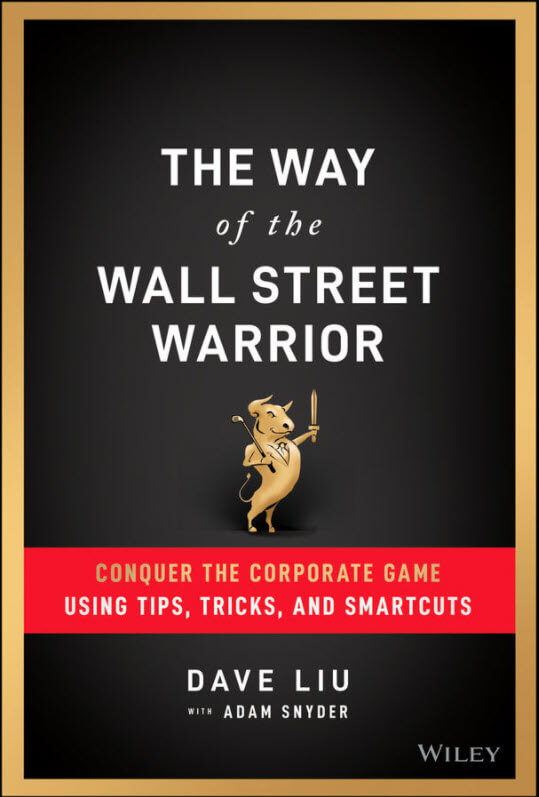 Many years ago, a friend who had been a trader at Morgan Stanley approached me with an idea: he wanted to write a book about how to advance in the finance industry.

After all, he explained, 90% of your long-term success was about earning promotions and higher compensation.

Everyone was obsessed with breaking into the industry, but winning an internship or job offer meant nothing if you couldn’t last.

I told him this was a fine idea to help junior employees but a bad idea if he wanted to make money.

My friend ignored my advice and wrote a solid book but never published it.

But someone else assumed the mantle, approached this task from the investment banking side, and authored an excellent book about this topic.

It’s called The Way of the Wall Street Warrior: Conquer the Corporate Game Using Tips, Tricks, and Smartcuts, and if you’re interested in advancing up the ladder, I highly recommend it.

The author is Dave Liu, a 25-year investment banking veteran, with experience co-founding several companies in his post-banking career.

He quickly rose to the Managing Director level, stayed there to grow his franchise, and then left banking in his early 40s to preserve his sanity.

A mutual connection referred me to Dave and his new book, and while I don’t read many “career guides” – I prefer sci-fi and fantasy – I was intrigued enough to read this one.

What Is The Way of the Wall Street Warrior About?

I’d describe this book as a combined memoir, recruiting guide, and career guide, and it succeeds to varying degrees in each of those roles.

The first ~25% of the book is about how to “get in the game,” or how to network and interview successfully.

The next 50-60% explains how to advance from entry-level roles to mid-level ones and eventually senior roles.

And the final segment explains how to thrive when you’ve reached the top and how to know when it’s time to move on.

He’s very honest about the downsides of becoming an MD or Partner in investment banking; one of my favorite quotes from this section was:

“Being an MD is like being a pro athlete: highly paid, short half-life, and someone always gunning for your seat on the team.”

Strengths: What I Liked

Unlike many career guides, this one is written in a lively, entertaining style with many pop-culture references throughout.

Each chapter starts with one of the author’s cartoons, so you can decide what to read based on a quick scan.

The greatest strengths of the book are:

My favorite part was probably the one on compensation (Chapter 19).

He describes the entire process of discussing and ranking people and explains why heated arguments often break out.

And he tells a great story of how he ingratiated himself with the Group Head one year, which led to him managing the spreadsheets that tracked the bonus pools.

Talk about having a more accurate read on the numbers than the average comp report or online discussion!

Weaknesses and Areas for Improvement

This book tries to do a lot, and while much of it is insightful, other parts don’t stack up quite as well.

For example, the first ~25% on recruiting goes into the “necessary but not sufficient” category for me.

Dave gives good advice about cleaning up your social media presence, writing effective cold emails, and standing out in interviews via cultural fit.

I agree with all these points, but this advice is not enough to be competitive for IB internships and full-time jobs in today’s environment.

You need the right sequence of internships, the right networking action plan, and a good command of technical and fit/behavioral questions.

And you need to deal with nonsense such as pre-recorded HireVue interviews.

I realize the author avoided these topics because he didn’t want to make the book 1,000 pages long and because he wanted to make it applicable to non-finance careers as well; you don’t need to walk through a DCF to get a marketing job at Google.

But if that’s the case, perhaps he should have skipped the recruiting bits and focused on advancing up the ladder.

With a title that includes “Wall Street,” I’m not sure how much it will appeal to people outside of finance anyway.

I have one other minor quibble: throughout the book, there are quotes from the author’s industry contacts in banking, private equity, venture capital, and other industries.

It’s nice to get other peoples’ perspectives, but I don’t think these quotes added much to the narrative; they mostly repeated common-sense advice.

I would have preferred more stories, whether from the author or these other professionals.

The Way of the Wall Street Warrior: Key Career Takeaways

It’s difficult to summarize everything, but a few of my favorite takeaways were on the following topics:

Practicing and Improving Your Communication/Presentation Skills

This one’s similar to practicing for job interviews: do the real thing as much as possible in lower-stakes settings.

Sure, you can record yourself and listen to your responses, and you can do mock interviews with other students.

They both help, but in my experience, you get most of the gains from practicing in real settings.

The author explains how he often set aside extra time on business trips to pitch lower-probability prospects that had no interest in hiring his bank.

He didn’t expect to generate fees from these efforts, but he did improve his presentation skills.

If you can pitch a lukewarm company without getting slapped in the face, legitimately interested prospects will be easy.

There’s even a section where he explains how to use anchoring and physical distances in presentations to get people to pay attention and stop playing with their phones.

Moving Up from VP to MD

Throughout the book, Dave writes about the steps required to advance from the mid-levels to the senior level (Partner or MD):

A few articles on this site have touched on this topic before, but there’s far more detail here, and it’s backed up by firsthand experience.

Empowering People Below and Above You

Bankers have a reputation for being terrible managers.

Just search the internet for “investment banking horror stories,” and you’ll find everything from sexual harassment to pointless all-nighters.

Some amount of horror is native to investment banking, but Dave took a very different approach on his way to the top.

Rather than humiliating his junior bankers, he identified their strengths, figured out what they wanted beyond money, and gave them options so they’d feel some sense of autonomy.

And if a team member wanted to suggest an idea in a meeting, he would let them – and then course-correct if the client’s reaction was bad.

These junior bankers had no say in his bonus, but they often ended up at client companies or PE or VC firms, so the relationships could be valuable for a long time.

On the opposite end of the hierarchy, he made the senior bankers above him, such as Group Heads, feel that they were benefiting from his deals.

Sometimes, this meant sharing “revenue credit” with these other bankers, even if they played marginal roles.

As it turns out, some bankers wouldn’t approve good deals unless they also benefited.

Yes, you need to generate a certain amount of fees to reach the MD level, but results alone are not enough.

You also need to be visible and make sure everyone likes you for different reasons.

How to Become a Wall Street Warrior

I stand by what I told my trader friend a long time ago: writing a book about advancing on the job is not a good way to make money in the mass market.

But that’s not always the goal, and in this case, Dave is donating the book’s proceeds to charity.

I also earn nothing from this review/recommendation since I’m using a generic Amazon link.

If you want a long-term career in finance, especially in investment banking, I strongly recommend reading this book.

You may not become a warrior overnight, but you’ll have the tools you need to climb the ladder and defeat your enemies on the way to the top.