Can You Tell Me About a Recent Deal? 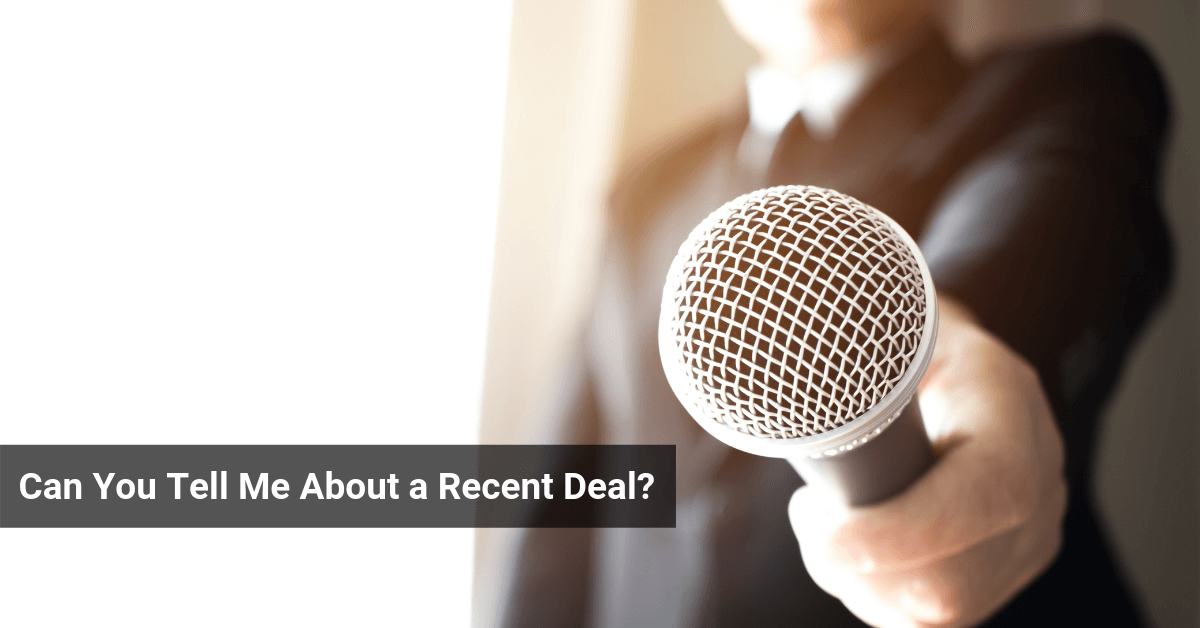 Judging by our email and comment volume over the past few months, there’s one interview question that causes more confusion than everything else combined…

Can you tell me about a recent deal?”

It seems like a very simple question: after all, you just read up on a deal online and then summarize what you find, right? Right?

Sure, background research must be part of your answer to this question, but it’s not just about summarizing the news.

Sure, you can memorize technical questions and recite your story word-for-word…

But can you walk the walk when it comes to speaking the Banker Dialect of the English language?

If you can, you position yourself well for internship and full-time offers.

And if you can’t, you might want to start thinking about your “Plan B” options.

Asking you to discuss a recent deal is an easy way to test whether or not you really understand how deals work (whether it’s M&A, debt, or equity / IPOs).

You can BS your way through “fit” questions and you can memorize responses to technical questions, but it’s much harder to do this for deal discussions and still sound reasonably intelligent.

It’s the same reason why case studies are so widely used in the EMEA region, and are now common even in the US, especially for lateral interviews: if you can’t walk the walk, it will be very obvious.

In regions with assessment centers and competency questions, such as EMEA and parts of Asia-Pacific, deal discussions are likely to come up in the form of written questions or case studies given at the assessment center.

What Should You Do to Prepare?

Picking a deal to research in the first place isn’t terribly complicated: focus on bigger transactions that have decent coverage in mainstream sources, and just do a search for recent deals in an industry you’re interested in.

You could also sign up to receive alerts when a deal happens in the sector of your choosing via this service provided by Dealogic; you can even get information on debt/equity financing deals from specific banks (examples below):

A long time ago, you could get information on deals more easily because the WSJ used to publish “deal profiles” in its Money Beat blog (example for Oracle and Acme).

Unfortunately, they no longer publish these detailed profiles, so you have to do more detective work.

Here’s what you can do instead:

If you can find the Fairness Opinion (for an M&A deal), that’s ideal because the bank discloses so many of the numbers and key multiples.

If not, you can still calculate them yourself based on what’s in company presentations issued around the time of the deal announcement.

For equity issuances, look at the S-1 (or equivalent form in other countries) and use the company’s share price at issuance – which is easy to find in online sources.

It can be tougher to find information on debt issuances unless you have access to Bloomberg or Capital IQ, so it’s generally a better idea to cite LBO / M&A / equity deals in interviews.

As you can tell, it takes time to do this research.

I create new case studies every year, and it still takes me at least 1 hour to find everything required for even a basic discussion of an M&A or LBO deal.

So I don’t recommend going crazy with this and researching dozens of deals – prepare to discuss 1 deal, or maybe 2 deals at most.

How Do You Actually Discuss a Deal?

Now you’ve done the research, found enough press releases, and you have the basic numbers required for the discussion.

Here’s the structure I recommend using:

1) Background information on the buyer and seller (revenue, profits/EBITDA, multiples, businesses) – or just the company itself in an equity/debt discussion.

2) Deal rationale – Why did the buyer/seller want to do it? Why did the company want to issue debt or equity?

3) Premium paid and deal multiples, and anything else unusual such as the deal structure (e.g., if it was an asset deal rather than a stock one). There’s no premium in an equity or debt deal, so there you’re just focused on multiples and, for debt deals, credit stats such as leverage and coverage ratios.

4) Your opinion on whether or not it will be beneficial for both the buyer and seller (or the issuing company) in the short-term and long-term.

Most deal discussions miss point #4 completely, which is probably the most common mistake.

Many discussions also miss the background information and deal rationale and skip straight into the numbers – that’s another mistake because the interviewer will have no idea what you’re talking about.

Take Me to the Examples, Please

As with all interview questions, you should be concise in your verbal answers to this question, but you can give more detailed explanations if you’re answering in writing.

Here, we’ll go through 2 examples for the Twitter IPO and the Dell leveraged buyout.

Yes, they’re both tech companies, but they’re also both based on real deal discussions I’ve critiqued in recent mock interviews.

Plus, it gives me another chance to laugh at how over-hyped and insanely overvalued Twitter is.

And since I’m not laughing at the Fed or central banks or “the recovery” this time around, Twitter will serve as a close substitute.

“One deal that interested me recently was Twitter’s $1.8 billion IPO.

Twitter, a major social media company everyone knows, had around $317 million in revenue and a net loss of $80 million in its last fiscal year prior to IPO, and in its current fiscal year so far, sales have increased nearly 80% but the net loss has also increased.

Twitter decided to go public because of the favorable market environment and its growing size – the company could raise funding at an attractive valuation that let insiders and investors reap their gains while also giving the firm enough funds to continue growing its business.

Twitter priced at $26.00 per share, which valued it at around 12.4x forward revenue. That was in-line with Facebook’s multiple of 11.6x and LinkedIn’s multiple of 12.2x at the time. Although those multiples are extremely high and unheard of for non-tech companies, the valuation wasn’t completely ridiculous since the comps were in a similar range.

After the IPO, however, Twitter’s shares surged almost 73% in the first day and even went over $70.00 before falling back closer to $60.00 in the months afterward.

In my opinion, the original valuation at $26.00 share was reasonable, though still very rich compared to other industries, and a good deal for both new and old investors.

The valuation since the IPO, however, has grown far too high and it’s likely that the price will decline once again, especially if Twitter misses revenue, earnings, or user growth expectations.

It’s a good example of a ‘Great company, but not a great investment at its current price’ story.”

Commentary: The background information here is very brief because everyone knows Twitter, but we do at least mention the industry, revenue, and net income figures.

The most important part is that we cite the multiples of peer companies and use those to show how the initial valuation was not that ridiculous – but how it became overvalued afterward as silly retail investors hopped on board the train, unknowingly headed into a large black hole.

EV / EBITDA and P / E multiples do not apply since the company was unprofitable, so we cite revenue multiples instead (which is, itself, another sign of an overvalued company).

You could get all this information from 2 mainstream news articles, with no further work required: Bloomberg and Business Insider.

“One deal that interested me recently was Silver Lake’s $24 billion leveraged buyout of Dell, announced early last year. Dell was a struggling hardware and software company that started out selling PCs, but expanded into laptops, servers, software, and services. As of the deal announcement, it had around $57 billion in revenue and EBITDA of $4.2 billion. Prior to deal rumors leaking out, it traded at 3.9x EV / EBITDA and 0.3x EV / Revenue.

The official deal rationale was that Dell could not turn itself around as a public company, and required the buyout to get out of the public eye while it transformed itself (to focus more on mobile, software, and services). At the same time, Silver Lake was looking for bigger targets to acquire since it had so much ‘dry powder’ back then.

They paid a ~25% premium for Dell, which equated to 5.1x trailing EBITDA. Close to $13 billion in funding came from debt, $6 billion from excess cash, $4 billion from Michael Dell’s rollover, and just over $1 billion in equity from Silver Lake. The leverage ratio, just over 5x, was fairly aggressive for this type of company, but the excess cash funding and the fact that Michael Dell’s ownership increased from 15% to nearly 80% incensed shareholders, who were being excluded from the potential upside of the deal.

My opinion is that it’s unlikely to be a great deal for anyone except Michael Dell – there’s no reason the company had to go private to transform its business because companies like IBM and HP did that as public entities.

In the short-term, Dell’s share price probably wouldn’t have increased by a huge amount – so while people like Carl Icahn were correct that the offer could have been better, they wouldn’t have necessarily seen a ton of extra upside from a one-time cash dividend and holding Dell’s stock.

Finally, it’s difficult to see how Silver Lake will get a solid IRR in any reasonable scenario unless the company’s growth and margins increase substantially.”

Commentary: OK, I “cheated” a bit on this one by referencing all the work we’ve already done for the Dell LBO case study covered previously on this site.

It would be very difficult to find all this information from press releases – but you can find a surprising amount, even if the estimates are very rough.

For a good example, see this Seeking Alpha article. The numbers aren’t precise and you won’t necessarily get the point on the IRR from that, but it’s a move in the right direction.

For better sources, you should review the actual filings for the deal and do the math yourself.

The most important point is that we’ve expressed an opinion on the key issue: was it a good deal for everyone involved?

And the answer, in my view, is “no” for the reasons stated above.

Now you have the instructions you need to find information on deals, you have my recommended template, and you even have a few sample deal discussions to use as your references.

Now, go research 1-2 recent deals that interested you and make sure you have enough information to follow the structure outlined above.

A fantastic deal discussion won’t necessarily get you an offer – but a terrible discussion almost guarantees that you won’t get the offer.

So not preparing for this question is sort of like buying Twitter’s stock – maybe it will pay off, and maybe it won’t be a total disaster…

But it’s not a chance you’d want to take in the current (job) market environment.