If you’re thinking about exit opportunities and can’t decide between private equity and hedge funds, activist hedge funds might be your solution.

Similar to private equity firms, they operate on longer time frames, influence companies’ operations and finances, and might catalyze major changes, such as spin-offs or acquisitions.

And similar to long/short equity hedge funds, they target undervalued and misunderstood companies and profit when the rest of the market catches up.

If you can win an offer at an activist fund, you’ll arguably get some of the most interesting work in the industry.

The main downside is that you might have to clarify what type of “activist” you are – so that you don’t get mobbed by an angry crowd burning down buildings or sociopaths screaming at each other on Twitter:

What is an Activist Hedge Fund?

Activist Hedge Fund Definition: An activist hedge fund accumulates sizable stakes in companies to gain operational/financial influence and persuades Boards and management teams to enact their desired changes; they profit based on increases in companies’ stock prices after these changes take place.

Activist hedge funds are usually classified as “event-driven” within hedge fund strategies, and for good reason.

Long/short equity and credit hedge funds look for mispriced securities with potential catalysts that might change their market prices.

But activist hedge funds create their own catalysts by winning ownership and influence and persuading others to enact the changes they want to see.

The problem could be almost anything, but it’s usually related to:

Elliott’s presentation to Suncor after they announced a 3.4% stake in the company has a good example of this structure (click the image for a larger version): 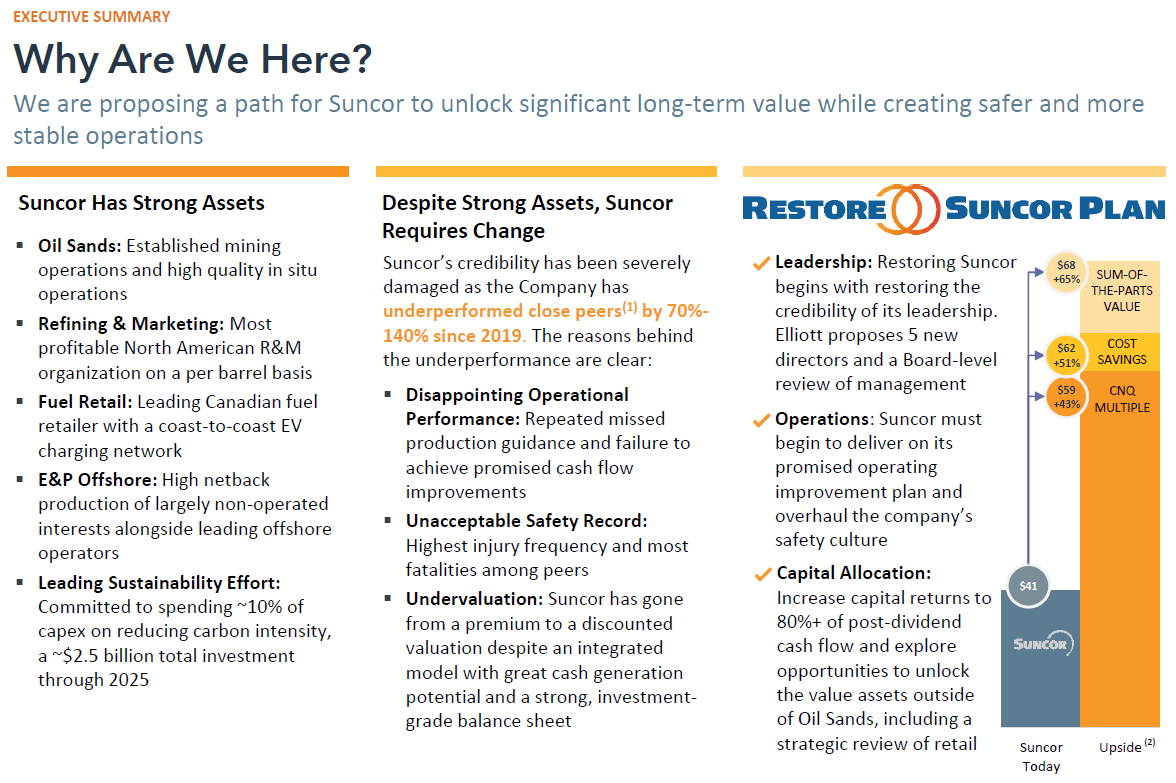 They even estimate the stock-price gains from different sources, such as multiple expansion vs. cost savings.

If Elliott succeeds in this campaign, they’ll gain several Board seats, convince other shareholders to support their changes, and sell their stake once Suncor’s stock price is within range of their target price.

Wait, Why Do Company Boards Care About Activist Hedge Funds?

You might now be thinking: “OK, fine, but why does anyone pay attention to activist investors if they have only 5% stakes (or less) when they announce their plans? That shouldn’t be enough ownership to influence the company significantly.”

That said, activist hedge funds still tend to get the best results in regions with a strong culture around “shareholder value,” such as the U.S. and the U.K.

They’re often less effective in places like Japan and continental Europe when everyone on the Board knows each other and won’t vote for change, no matter how poorly run the company is.

How Do Activist Hedge Funds Differ from Others?

Activist hedge funds tend to have the following qualities:

1) Long-Term Investment Horizon – It might take years to realize their changes, so their holding periods exceed most other hedge funds.

2) Longer Lockup Periods for Capital – This fact sheet from Trian Partners is useful for quantifying this one: 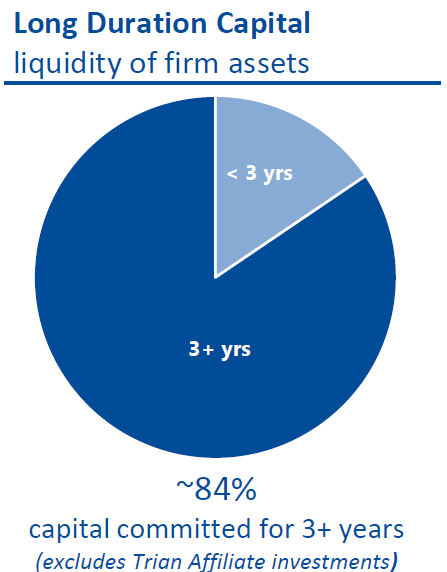 3) High Net Exposure and High Beta – Since most activist hedge funds target undervalued and misunderstood companies, they are effectively long equities most of the time. This point explains the following graph from Aurum’s Hedge Fund Industry Deep Dive (click the image for a larger version): 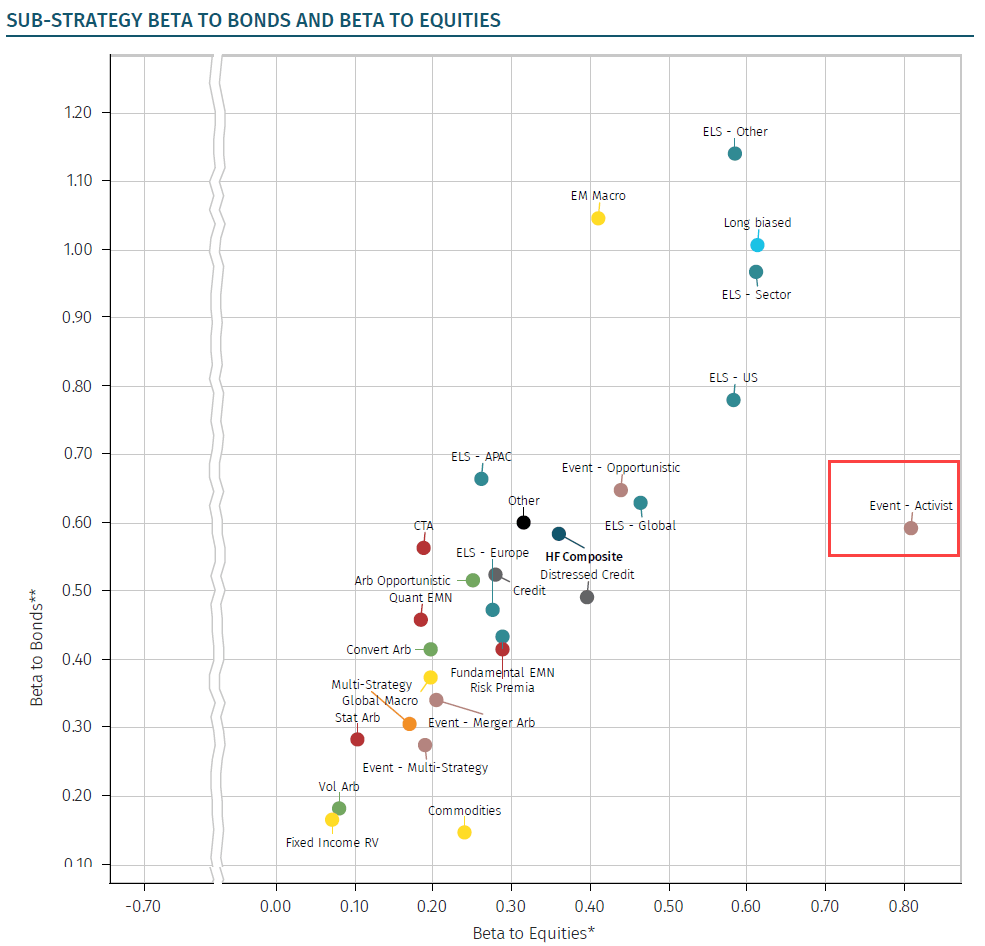 You could argue that activist hedge funds provide the least “hedge” of any strategy because of their high net exposure (longs – shorts).

4) Normal Leverage Levels – Activist hedge funds have less-liquid positions and longer holding periods than global macro funds, so they tend to use less leverage; it’s on par with the average level for credit funds and a bit below the average for equity funds.

5) Concentrated Portfolios – It’s rare to find an activist hedge fund with 50 or 100 positions because each one requires substantial time and effort that goes far beyond normal “monitoring.” Cevian’s Strategy page has a great summary (significant minority ownership in 10-15 public companies at a time, 5-year holding periods, and €500 million – €1.5 billion per company).

Finally, activist funds tend to be larger (multi-billions of AUM or more) because it’s very difficult to buy substantial stakes in public companies with only $100 or $300 million of capital.

Activist funds with under $1 billion in AUM do exist, but they’re usually limited to small-cap companies.

Activist hedge funds differ mostly based on their aggressiveness.

You can divide most strategies into these categories:

First, note that there aren’t that many “pure-play” activist hedge funds.

People will sometimes put firms like Pershing Square in this category due to some high-profile activist campaigns they’ve led.

And while Carl Icahn may be the highest-profile activist investor of all time, he hasn’t managed outside money since 2011, so Icahn Enterprises is not technically a hedge fund.

In Europe, the best-known activist fund is probably Cevian, which focuses on the Nordic and DACH (Germany, Austria, and Switzerland) regions.

How to Recruit into Activist Hedge Funds

The short answer is: “Work in investment banking, private equity, or both, and then use your deal experience to recruit for activist funds.”

Few activist funds hire candidates directly out of undergrad because you need substantial deal experience before you can add much value.

I did a quick/informal survey of those in my LinkedIn extended network with experience at activist hedge funds and found the following results for their previous backgrounds:

Since there aren’t that many pure-play activist funds, recruiting tends to be very “random” – an individual fund does not necessarily hire new people every year or follow any schedule.

To maximize your chances, work at the best bank you can get into and then join a private equity mega-fund or an upper-middle-market fund.

In Europe, some funds prefer candidates with a consulting or combined consulting/banking background; Cevian is in this category.

The recruiting process can be quite intense because many activist funds run lean teams, and competition is fierce because of the perceived “prestige,” compensation, and sporadic hiring.

For example, Elliott is known for conducting multi-month recruiting cycles and giving candidates psychological profiles or IQ tests in addition to all the standard interview questions.

Case studies, modeling tests, and stock pitches are similar to those in the long/short equity or credit fund recruiting processes.

In other words, expect to complete a fundamental-based valuation (DCF and multiples) of a company and recommend investing based on the output in different cases.

The main differences are:

This last point explains why these funds might assign you a company or situation rather than asking you to develop an idea independently.

Hedge fund compensation is linked to fund size, performance, and individual performance/contributions, so it’s impossible to say if the “average” activist hedge fund employee earns more or less than the average at other fund types.

I’ve seen some SumZero compensation reports from previous years that break out median compensation by strategy, but they’re not that useful due to big fluctuations from year to year (“activist” is in the mid-to-lower end of the range for compensation, if you’re curious, but I wouldn’t read much into it).

That said, it is fair to say the following about activist hedge funds:

Since you probably worked in investment banking, private equity, or both before moving into an activist hedge fund, you could also leave and return to one of them.

If you’ve somehow gotten into an activist fund without doing one of those first, it will be much harder to make this move.

Yes, you do work on “deals,” but it’s a far less comprehensive process, and you’re not responsible for executing all the steps (or even advising on them).

Your main goal is to persuade other shareholders, which means you spend more time on presentations and outreach than on reviewing the fine print on page 157 of the merger agreement.

Since activist investing overlaps with other strategies such as long/short equity, credit, and even merger arbitrage, you could potentially move into a fund or group in one of these areas.

Long-only asset management is also a possibility, but you’re probably not the best fit because of the active vs. passive nature of these two fields.

If you’re at a fund that also invests in debt, you could also potentially move into direct lending, mezzanine, or credit hedge funds.

Other deal-based roles such as corporate development, venture capital, or growth equity are theoretically possible but not that likely.

So, these are likely exits only if you’ve worked in one of them before joining an activist fund.

You can find dozens, if not hundreds, of activist hedge fund presentations and letters online, but there are surprisingly few good books about the sector.

Here are some recommendations by media type:

Finally, a few useful presentations and letters include:

In many ways, activist hedge funds are “more interesting” versions of long/short equity or credit funds.

They use similar valuation and research methodologies, but they make their own catalysts – or attempt to do so – and profit based on undervalued companies with untapped potential that need major changes to realize that potential.

This strategy makes the work more interesting, but it also comes with a downside: these funds tend to be highly correlated with the overall market, so it’s difficult to say how much of a “hedge” they provide.

The other major issue is that there aren’t that many pure-play activist funds, and the ones that still exist are becoming tamer or turning into private equity firms.

But depending on your career goals, that might be an advantage.

Just make sure you don’t turn into a Twitter “activist” in the process.