Merger Arbitrage: The Best Strategy for Investment Bankers in Search of a Hedge Fund Exit?

Ask any banker interested in hedge funds about the specific strategies they like, and merger arbitrage will usually come up.

On paper, it makes sense: if you worked in M&A investment banking or an industry group that does a lot of M&A deals, you’ll know the process, timeline, and common problems that kill deals.

You’ll even have an advantage over public markets professionals (sales & trading, asset management, other hedge funds, etc.) who haven’t worked on mergers and acquisitions directly.

Plus, you’ll be great at valuing companies and determining what they might be worth if a deal goes through (or if it falls apart).

That said, I’m not convinced that merger arbitrage – betting on M&A deals closing – is necessarily the “best” type of fund for bankers to target.

But let’s start with the overview and a few quick examples:

What is Merger Arbitrage?

Merger Arbitrage Definition: Merger arbitrage is a type of event-driven hedge fund strategy in which the fund bets on the outcome of mergers and acquisitions and profits based on the “spread” between a target company’s share price and its eventual price when a deal closes.

If one company wants to acquire a public company, it typically must pay a premium.

For example, when Microsoft (MSFT) announced plans to acquire Activision-Blizzard (ATVI) so they could recreate World of Warcraft and Call of Duty in Excel, the company was trading at around $65 per share: 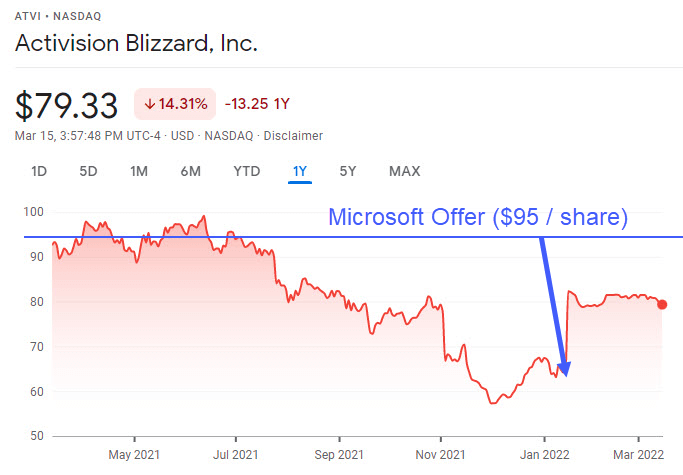 In this situation, MSFT could not have walked in and offered $65 per share to acquire 100% of ATVI’s shares.

ATVI’s shareholders would not have agreed to this because they could have sold their shares for $65 on the open market.

Instead, Microsoft had to incentivize them by offering a premium, which is often between 10% and 30% (but varies widely based on trading history, company performance, etc.).

In this case, MSFT offered $95 per share, approximately a 46% premium (high, but not that high vs. ATVI’s share price over the year before the deal). 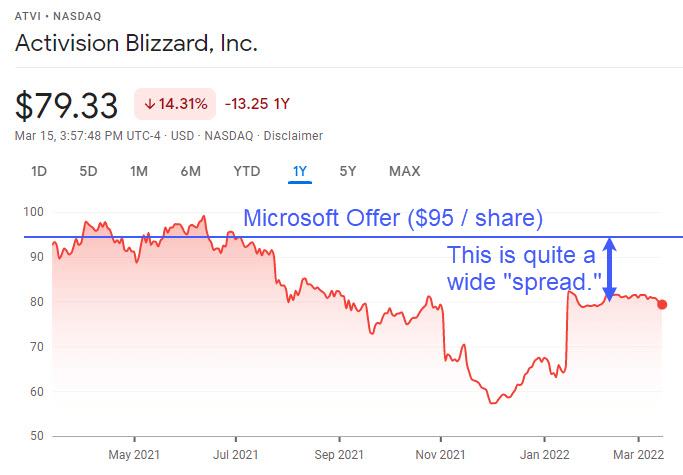 That’s because the market knows there is some probability that the deal will fail to close, and that even if it does close, it could take a year or more to do so.

And the longer the time to close, the more that could go wrong.

In this specific case, the risk is mostly regulatory: anti-trust officials might perceive this deal as Microsoft gaining too much power over the gaming market and block it on those grounds.

A merger arbitrage fund could trade this situation in different ways:

But if this deal takes only one year to close, that’s a fairly good annualized return; if it drags on, the numbers start to look worse.

This spread is unusually large because of the high risk of failure; the average spread in smaller M&A deals is more like 5-10%:

People often use the analogy of “collecting pennies in front of a bulldozer” to describe merger arbitrage.

In other words, you’re making lots of small, modestly profitable bets while trying to avoid blow-up risk from the rare canceled deal.

Merger arbitrage tends to be a high-turnover strategy with many low-risk/low-return positions that change every few months.

Because of this lower perceived risk, most merger arbitrage funds use leverage to boost their potential returns and their risk.

Evaluating a potential investment consists of:

Mergers and acquisitions typically fail for a few reasons:

People often say that merger arbitrage is a “binary strategy” because there are only two outcomes: a deal gets canceled, or it closes. 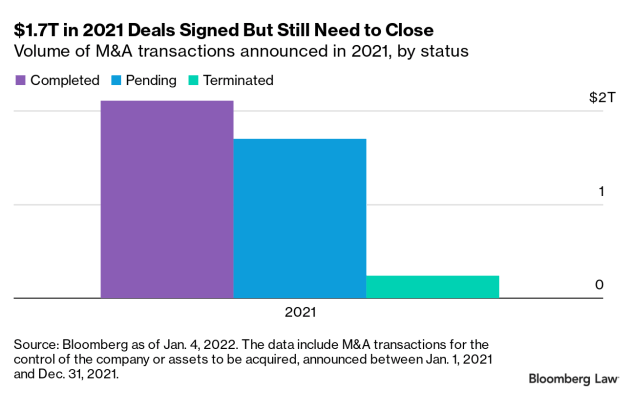 …but other outcomes are possible.

For example, the acquirer could increase or reduce the offer price, change the consideration type, or change other deal terms, such as the exchange ratio or go-shop/no-shop provision.

The most interesting funds often focus on unusual deals with a broader range of possible outcomes.

Everything above describes funds that bet on announced deals in which the acquirer has made a specific offer for the target.

The analytical work at the pre-announced/soft-catalyst funds is closer to the work at fundamental/deep-value funds because you’re looking for undervalued companies that might become acquisition targets.

In addition to these categories, some investments involve active arbitrage (i.e., the fund owns enough stock in the target company to influence the merger’s outcome), while others are based on passive arbitrage (the fund has no say in the outcome).

Investment analysis here is based on the spread that will be closed if the deal closes, which depends on the value of the target and acquirer, the certainty of close, the estimated time to close, and special deal terms (e.g., collars in all-stock deals).

Besides valuing the target, acquirer, and combined entity, you could also look at the merger yield, which equals the estimated annualized return divided by the merger spread.

This merger yield might also include other adjustments, such as deductions for the short borrow cost and trading commissions, for more accuracy.

The merger yield tells you how lucrative a deal is based on other deals in the market with similar success probabilities.

To assess the downside risk, you can’t necessarily assume that the target’s share price will fall back to its pre-announcement price.

That’s a decent baseline assumption, but the target’s share price could drift below its pre-deal price if the market “penalizes” the company or thinks it has no good options.

So, valuation is important for setting a floor on your potential losses.

Almost all the large, multi-manager hedge funds use event-driven strategies, and merger arbitrage is one of the best-known within this category.

If you want to read about one of the top portfolio managers in the field, check out this article about Drew Figdor at Tiedemann.

Recruiting: Who Gets Into Merger Arbitrage Funds?

Merger arbitrage is potentially a good area for bankers with M&A experience (i.e., not ECM or DCM).

Some lawyers also end up at these funds, especially if they understand anti-trust law and the regulatory approval process.

I did a quick survey of ~25 professionals with “merger arbitrage” experience in my LinkedIn network and got the following results:

So, transaction experience is helpful, but it’s 100% possible to start in hedge funds, stay in them, and eventually switch to a merger arbitrage group.

It seems to be a bit more difficult coming from the standard sales & trading desks or equity research, but it is possible.

You wouldn’t have a great shot coming from a pure legal background (no IB/PE deal experience) unless you target funds that weigh qualitative criteria very heavily.

This strategy is part art and part science, and you can find funds everywhere on the spectrum.

Programming skills tend to matter less than they do elsewhere, as much of the process cannot yet be automated – but some funds do use a “quantamental” approach.

As with hedge fund recruiting everywhere:

The career path here isn’t much different from the standard hedge fund career path anywhere: if you do well, you’ll move up, and if you don’t, you’ll get fired.

The single-manager vs. multi-manager distinction, fund size, and specific sub-strategy make more of a difference than the broad fund category.

Promotions are a mixed bag for a few reasons.

There’s probably less “portfolio management” required than in other strategies because the main point is to avoid canceled deals.

As long as you’re reasonably diversified and haven’t overweighted deals with a high chance of failure, you’ll probably make some money.

But some funds “silo” parts of this strategy more than with something like distressed credit or long/short equity.

So, if you get hired to crunch the numbers while the PM or Senior Analyst does the due diligence and “gut checks,” it may be harder to advance because you won’t have exposure to the entire process.

Once again, this one depends more on the fund size, SM vs. MM distinction, and specific sub-strategy than the broad “merger arbitrage” category.

The potential upside is higher with the latter, but it’s also more time-consuming and stressful because you’ll do more fundamental research and valuation work and follow each company over a longer time frame.

As at most hedge funds, experienced Analysts can expect compensation in the mid-six figures rising to the high-six figures as Senior Analysts and into the 7-figure range beyond that.

The main issue is how the Portfolio Manager perceives your “value-add.”

If you’re more of a number cruncher, and someone else is dealing with issues like anti-trust and high-level government intervention, you can expect lower compensation.

In theory, many of the skills you gain in merger arbitrage, such as company valuation, should apply to other strategies such as long/short equity and even special situations.

In practice, most people tend to stay within the “event-driven” or “arbitrage” baskets because the thought process is quite different, even if the technical skills are similar.

If you want to leave hedge funds entirely, it is possible to return to investment banking or even sales & trading if you can find a relevant group.

Moving to something like private equity, corporate development, or venture capital is a longshot unless you’ve already had experience in one of these fields.

Yes, you work on transactions, but you’re directly executing the deals rather than betting on the outcome of other peoples’ deals.

Here are some recommendations if you want to learn more about merger arbitrage and related strategies:

I’ll be honest: I think the “plain vanilla” merger arb strategy of betting on deals closing is quite boring.

It can be lucrative, especially if your fund uses significant leverage, but the range of potential outcomes is much narrower than in strategies like distressed credit or long/short equity.

But if you like focusing on near-term events, following dozens of deals, and making quick “gut” decisions, it might be good for you.

On the other hand, if you want to do deep dives on companies and take weeks or months to dig in, it’s not a great fit.

If you’re in that camp, you should find a fund or group that does one or more of the following:

If you can find that, merger arbitrage could go from boring but profitable to something within striking distance of “exciting.”