The Twitter Buyout: Is Elon Musk a Madman or a Genius?

As is usually the case, everyone wants to talk about Elon Musk and his latest antics – and this time, the antics consist of his Twitter buyout for a cool ~$44 billion.

These are all interesting topics, but since I am a depressing person, I will ignore them and focus on the numbers.

Put simply, does the math work?

I don’t think this deal is completely crazy, but I would say it is moderately crazy.

A 20% IRR over a 5-7-year holding period will be possible but challenging.

For that to happen, many things need to go right.

I expect the following potential outcomes:

The key problems are:

If you want the full tutorial, Excel model, highlighted documents, and more about the most important technical points, keep reading:

I’ve highlighted the key parts of each document so you can jump around more easily.

And here’s each section in a bit more detail:

The main information sources are the Twitter 10-K, its 2022 Q1 Earnings report, the merger agreement, and the loan/financing document.

The 10-K and loan/financing document are the most important parts because you need the company’s annual statements to build a model, and you need the debt tranches, interest rates, etc., to build in the LBO functionality.

As I mentioned in previous articles on the private equity case study and the timed LBO modeling test, we recommend a simple, “cash flow only” LBO model unless they specifically ask you to project all 3 statements: 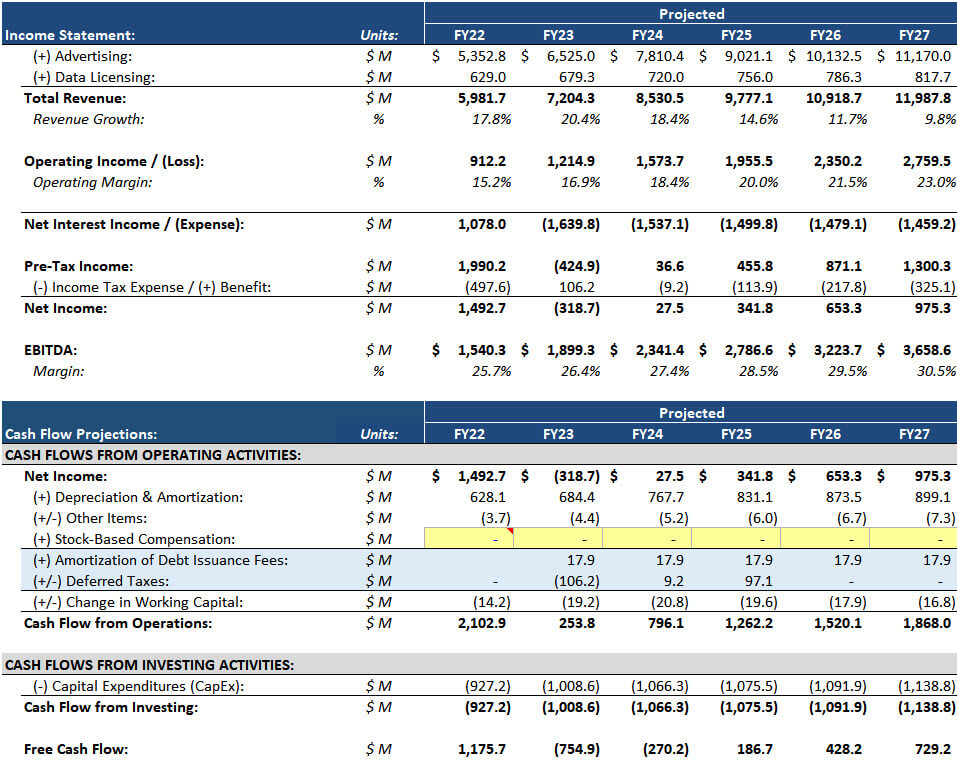 This way saves time and lets you focus on the most important parts, such as the revenue and expense drivers, rather than minutiae.

You do need a Debt Schedule, and a Net Operating Loss Schedule is relevant here, but I wouldn’t build in more than that.

If you follow these steps and start from a reasonable template, it might take you anywhere from a few hours up to a few days to build this type of model.

It depends on how closely you read the deal documents, how much outside research you do, and how quick you are with Excel.

For the share count and option information, I used the merger agreement to get the counts as of the announcement date (the exercise prices come from the 10-K):

Everyone knows the offer price of $54.20, and the Equity Value / Enterprise Value bridge is straightforward based on Twitter’s Q1 Balance Sheet.

There are a few deviations from standard LBO deals:

In a few cases, I had to make guesstimates, such as with the 1.0% overdraw fee on the Revolver.

Twitter clearly has excess cash & investments here: a $6.4 billion balance vs. total operating expenses and COGS of $4.8 billion in FY 21.

But I don’t think the company can use much of this balance to fund the deal.

For example, if they use $4-5 billion to fund the deal, the company runs into trouble with debt service and draws on the Revolver for billions of dollars vs. the theoretical “maximum” of $500 million.

The company cannot even cover the interest expense on the transaction debt initially, so this excess cash is needed to pay for some of the early Margin Loan amortization.

We can debate the exact deal funding, transaction fees, and excess cash, but the bottom line is that it looks like $19 – $21 billion of Investor Equity will be required no matter what happens.

You can translate that into: “Elon’s selling more Tesla shares or finding some partners.”

Our usual approach is to start with the consensus numbers for Twitter based on equity research forecasts and move up or down to examine other outcomes:

In this case, we also created  “Margin,” “Growth,” and “Downside” scenarios, each based on different assumptions for the revenue and expense drivers.

The key revenue drivers are monetizable Daily Active Users (mDAU) and average revenue per user (ARPU), so they’re the highest in the “Growth” case, followed by the Base case, the Margin case, and the Downside case at the bottom.

The margins are based on the Employee Count, linked to a Revenue per Employee assumption, and the Operating Expenses per employee.

The OpEx per Employee figure grows at different rates in these scenarios, and the Employee count is the highest in the Growth case, followed by the Base, Margin, and Downside cases.

In terms of benchmarking these numbers, the overall idea is that Facebook, AKA “Meta Platforms,” is the top company on most of these metrics except for growth.

So, the Growth case here assumes the highest mDAU growth and an eventual ARPU figure close to Facebook’s ($37 vs. $41) – but also the lowest margins (18% by the end).

Each case below that discounts the mDAU growth and ARPU but assumes higher margins such that the FY 27 EBITDA figures are fairly similar: 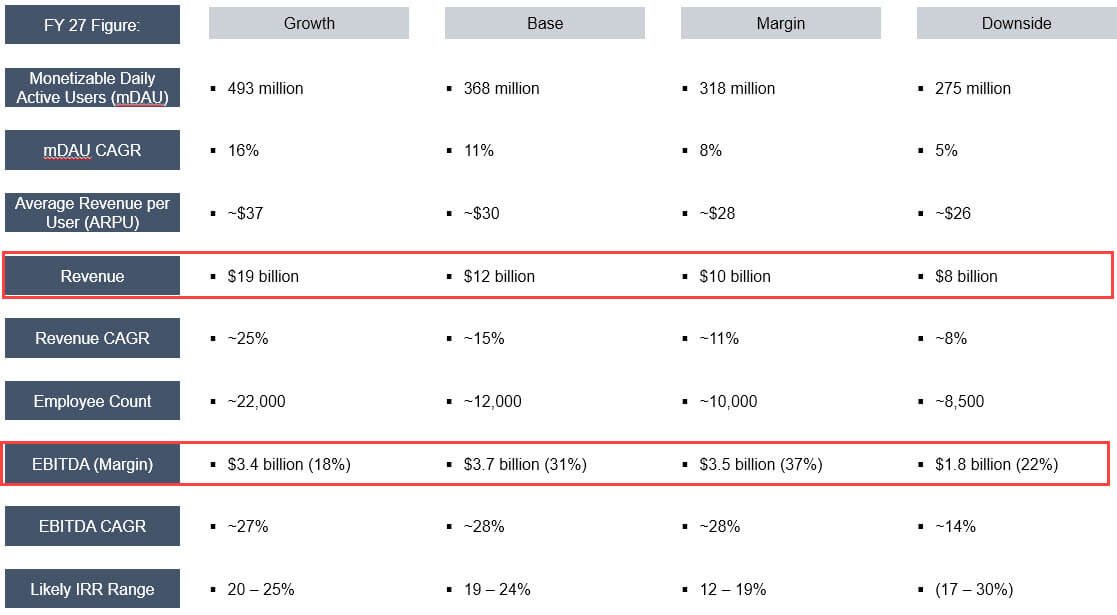 Each case also uses a different exit multiple because higher-growth companies tend to trade at higher multiples, especially in tech.

Much of the online commentary has focused on Twitter’s margins – which are important but not the whole picture.

A few other factors weigh heavily on the company’s ability to service and repay the $25 billion of Transaction Debt:

This assumption matters because it pushes Twitter’s interest in the first year from “very high” to “incredibly high”:

On top of all that, there’s also 1% amortization on the Term Loan and 5% on the Margin Loan.

This situation creates some odd consequences, especially in the Growth and Downside cases:

The bottom line is that all these issues make the deal very dependent on the exit multiple and time frame.

And they’re both problematic as well (see below).

So, an IPO will be required, which raises the questions of the exit multiples range and the time frame.

We’ve assumed a gradual sale of Elon’s stake over 3 years here, but that might be optimistic.

If it takes longer, the IRR will drop even more.

For the range of exit multiples, it’s useful to look at:

But it’s easier to understand this set when it’s plotted on a graph, with Revenue Growth vs. Revenue Multiples shown here: 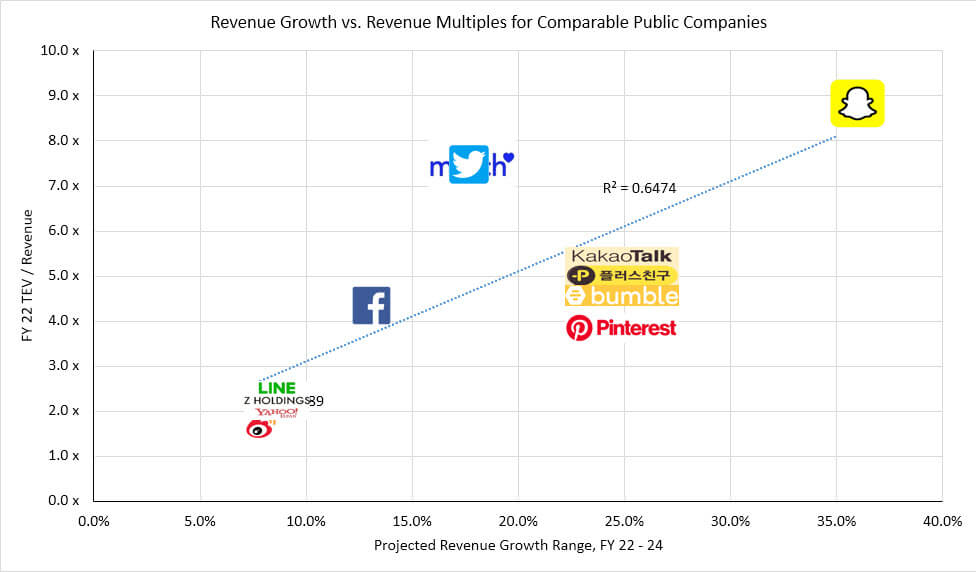 And over the past few years, the company has rarely traded above 50x EBITDA once it achieved substantial positive EBITDA: 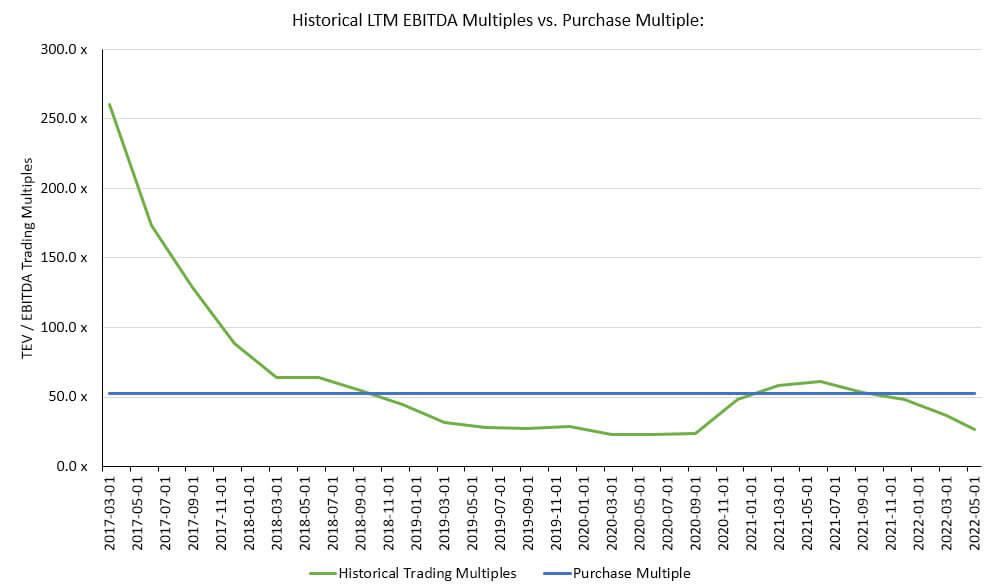 In short, we think an exit multiple of 50x+ is implausible, as Twitter is a worse business and has far more issues than Snap, Pinterest, and the other names here.

That said, its financial profile does improve over the holding period in some cases, so a “Median to 75th Percentile” range of multiples may be justified.

Based on that, we selected a range of 15x to 30x in the Downside through Growth cases.

We could sensitize many variables in this deal, but the exit multiple and operational scenarios are the most important ones.

The purchase premium and leverage are both significant, but since this deal has already been announced, they’re not subject to (much) change.

Here’s the damage (click the image to see a larger version):

At first glance, the results might seem pretty good.

But the Downside case numbers are really, really bad, and the assumptions used in the other cases are “generous,” to put it mildly.

And if you account for some of the other factors, such as more than 3 years required to sell his entire stake following the IPO, the numbers get even worse.

Given that he’s worth ~$250 billion, Elon Musk surely knows that this deal is “financially questionable.”

But as he has previously stated, he seems to be doing this for non-financial reasons.

And that’s fine – if I had even 1 / 100th of his net worth, I might also play around with marginal/controversial companies.

But the financial firms that are backing this deal might not stay along for the ride.

And it might be difficult to find other backers if Musk decides against contributing another $19 – $21 billion of his net worth to fund this deal.

I normally close comments on technical articles, but I’m leaving them open because this is also a “current events” topic (similar to the Uber valuation).

So, do you think this deal is completely ridiculous? Will Elon save or destroy the world?

And will Tesla start trading based on Twitter’s performance rather than the Zodiac signs?