Private Company Valuation, Part 2: Could You Be in the Meth Business *and* the Empire Business? 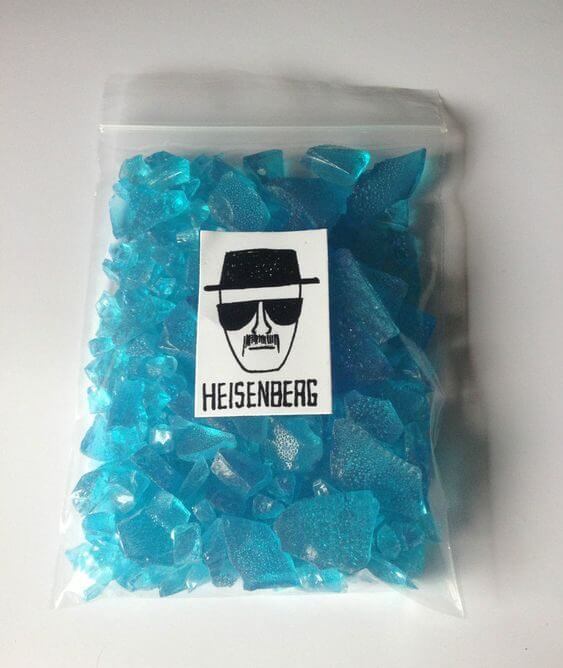 If you start a business selling crystal meth from your RV, could it resemble a Fortune 500 company?

Most people incorrectly assume that all “private companies” are valued in the same way.

But they’re not: Does Ikea resemble a 5-person barber shop?

You can divide private companies into true small businesses (“Money Businesses”) that are dependent on a few people, startups that want to get big quickly (“Meth Businesses”), and huge companies that just happen to be private (“Empire Businesses”).

But that’s not quite right, either.

It’s a very traditional way of looking at this topic: Using public company valuation as a starting point and explaining the differences.

But the lines between public and private companies have been blurring.

Rather than thinking about the category a company is in, you should think about where it is in the “gradient” between public and private.

And rather than assuming there are “differences” in private company valuation, you should use these differences to question the basic tenets of traditional valuation.

Why the Public/Private Lines Have Blurred

Change #1: Startups Are Staying Private for Much Longer

Companies did this because they had to: There weren’t many late-stage investors willing to sink hundreds of millions into cash-flow-negative startups to fund growth.

Past a certain point, startups had to tap the public markets for capital.

But Facebook changed all that by accepting huge late-stage investments from DST and Microsoft, and companies like Airbnb, Uber, and Xiaomi have taken that trend even further with multi-billion-dollar rounds of debt and equity.

It’s misleading to think of these large, late-stage startups as “private companies”; they’re more like public companies with small floats and limited information.

Decades ago, it was impossible to buy shares in a private company unless you worked at the company.

But SecondMarket (now NASDAQ Private Market) changed that when it started listing shares of private companies and letting market participants buy and sell them.

It’s now feasible to acquire shares of tech startups and other private companies even if you haven’t worked at any of these firms.

Some startups even encourage employees to sell their shares – companies like Atlassian and Airbnb did this in their late-stage funding rounds.

In the U.S., “Reg A+” is a part of the JOBS Act that lets companies raise up to $50 million from both accredited and non-accredited investors.

After that, the FAST Act formalized rules on trading the shares of private companies.

And then Regulation Crowdfunding went into effect, which allows capital raises of up to $1 million from the general public with minimal disclosure requirements.

To go beyond that, though, companies need audited financial statements and public SEC reports under Reg A+.

This dynamic has led to another change:

As asset managers such as Fidelity and T. Rowe Price have gotten into the startup investing game, they’ve also been reporting on the values of their portfolio companies quite publicly.

This move surprised many in Silicon Valley, who had assumed that these newcomers would just hold their investments at cost.

If you can Google a company and find its revenue for the past two years and current valuation, it’s not a real private company.

What Hasn’t Changed: Private Companies with No Inclination to Go Public

Most of these changes refer to tech and biotech startups.

There have been fewer changes in the lower end and the upper end of the private company universe.

It’s not feasible for true small businesses to get audited financial statements or to set up strict controls and corporate governance, nor do they have any reason to.

Why would a family-run hotel chain started in 705 (yes, over 1300 years ago) want to raise capital on a crowdfunding site?

At the upper end, little has changed because huge businesses have no reason to make their shares available, disclose more information, or raise outside capital.

So, What Makes a Company “Private”?

Fred Wilson put it very well in his post on The Blurring of Public and Private Markets:

“The more a company discloses, the more liquid their securities become.”

The truth is that many private startups are, effectively, public companies.

Rather than dividing companies into “public” and “private,” you should think of it as a gradient: Some companies are more public, and others are more private.

Since the classifications have blurred, the valuation differences have also blurred.

Many private companies do not report items in a “standard” way on their financial statements.

For example, many business owners take a small salary but also pay themselves a dividend that’s taxed at a lower rate.

An acquirer or investor would re-classify that “dividend” into operating expenses for the company.

These are common problems for private companies, but you shouldn’t assume that all public companies have completely fine financial statements.

For example, we recommend converting Cash Flow Statements created with the Direct Method to ones based on the Indirect Method instead, as it makes modeling and valuation far easier.

You should question many of the assumptions and disclosures of public companies as well:

Since many companies achieve higher valuations in the private markets than they do in the public markets, it’s misleading to assume that all private companies are worth less than their public peers.

If a private company’s shares trade like those of a public company and you can easily find its financial stats, you shouldn’t be applying much of a discount.

On the other side, you could arguably apply an illiquidity discount to certain public companies.

For example, if the company is public but its float consists of only 10% of its shares, is it “liquid”?

Or if there’s such limited trading volume that it’s impossible to exit a large position quickly, is the company “liquid”?

And now to the punch line: The concept of Terminal Value in the DCF analysis is flawed.

The fact that you have to discount it in a private company DCF demonstrates its flaws.

The problem is very simple: No company, public or private, lasts forever.

Sure, a large, well-run public company will probably last longer than a family-run wine shop, but the lifespan of all public companies has been falling: 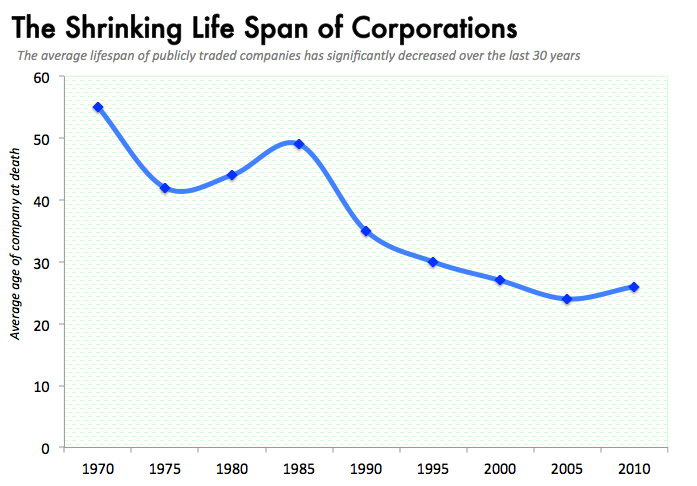 Historically, the average lifespan of multinational corporations was only 40-50 years.

A more realistic assumption is that FCF growth will slow down after the first 10 years, and then FCF will start declining midway through the period as the company shrinks:

If that happens, the discrepancy is more like 15-20%, which is significant.

And if the company goes out of business more quickly, the discrepancy will be even greater.

I’m not the first one to notice this problem; a few professors from Portugal also covered it in an academic paper:

The following approaches to a DCF might be better:

Bankers will not understand these points, so don’t bring them up in interviews.

However, if you’re in an interview you don’t care about and you want to see the other person squirm, you could try arguing your case.

And see what they think about Terminal Value in light of these stats.

The Implications: Can You Make Money from Mispriced Companies?

If Terminal Value overstates most companies’ implied values, you might think you could make money by shorting companies, particularly ones that are likely to be disrupted.

But that may be easier said than done because:

One of the great unsolved problems in physics is how to unify quantum mechanics and general relativity.

The fact that the theories and math are different feels wrong; it seems like there should be one grand theory that ties everything together.

I think of public and private company valuation in the same way.

You shouldn’t assume that all public companies are equally “liquid.”

And you shouldn’t assume that a public company can operate indefinitely or grow at the same rate until the end of time.

Change those assumptions, and that crystal-meth-cooking RV might start to resemble a Fortune 500 company – after you do enough meth, of course.