HOME About
by Brian DeChesare Comments (2)

From Finance to Tech: How to Start a Company, Sell It, and Start an Even Better Company 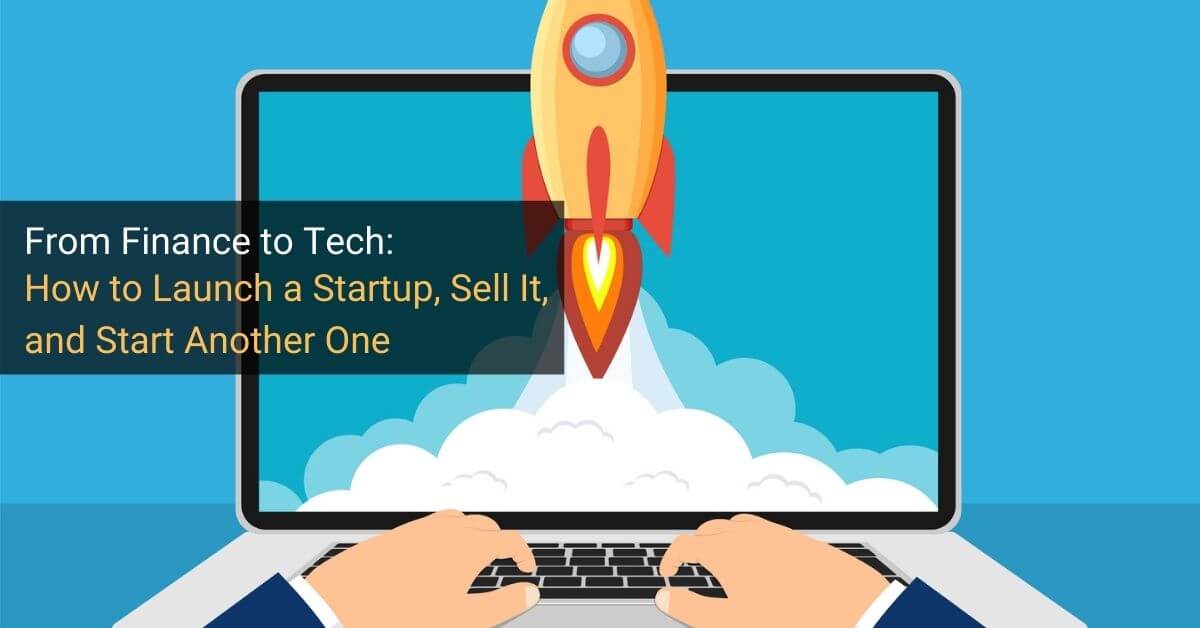 If you’re bored or unsatisfied with your finance or consulting job, should you quit and join a tech startup instead?

We’ve received many questions asking about this career transition over the years, and the best answer I can give is “Maybe.”

While it sounds like a nice idea, the reality is that not everyone is suited for the work environment of a tech startup.

To gain some perspective on this question, I recently spoke with Nicholas Hinrichsen, who worked in consulting and M&A, went into renewable energy investing, started and sold his first company, Carlypso, to Carvana, and is now on company #2: WithClutch.

Among other topics, we discuss:

Finance to Tech… via Renewable Energy Investing and Business School

Q: I linked to your LinkedIn profile above, but can you give us a summary of your story and how you became interested in startups?

A: Sure. I was born in Munich, and my parents were from Argentina, where my grandfather had run a successful soybean export business.

My father studied medicine, eventually started running his own clinics, and then worked in private equity after a PE firm acquired his firm.

I was interested in engineering and building things (such as Legos when I was a child), but my father always told me to do an MBA and become an entrepreneur.

After graduating from university, “everyone” told me to apply for jobs in finance and consulting, so I completed internships at Bain and Merrill Lynch.

But I found both jobs boring/unfulfilling, so I later accepted a full-time role at a newer investment firm that focused on renewable energy deals in China and India.

I worked there for two years, traveled extensively, and then went to the Graduate School of Business at Stanford and used that to get into the technology industry.

I co-founded Carlypso with a classmate right after graduating, sold it to Carvana in 2017, and worked there for a few years.

Carlypso started as an online used car marketplace, but it evolved into data and analytical tools that helped value cars without inspecting them physically.

My co-founder and I both left Carlypso a few months ago to start a new company, WithClutch, which is also in the auto space.

It sounds like you were never that interested in finance or consulting, but it’s still quite a leap to go from renewable energy investing to business school to your own startup.

Why were you confident you could do it?

A: For one, I already had some entrepreneurial experience co-founding a business that sold leather accessories to women.

When I was in India during my renewable energy investing job, I got stuck once because of a volcanic eruption that shut down air travel.

At that moment, I heard from a friend-of-a-friend who was interested in leather goods from India, and I purchased a few samples that I brought back to Germany.

We turned the first batch of €4,000 worth of handbags into €20,000 in sales at a Tupperware party, and then we kept sourcing more leather handbags and other accessories from India.

I put them in the trunk of my car and traveled around Germany, selling them to retailers.

I was good at sales, but I had no personal interest in leather accessories for women, and I didn’t like the big shift to promotion via Instagram, so I sold my shares in the company to my partner.

Selling leather handbags door-to-door is different from a tech startup, but you use similar skills in any sales role – so I gained the confidence to start something larger from that experience.

Q: Great. Before we discuss the “finance to tech” transition, can you describe your current company, WithClutch?

Our goal is to build “Credit Karma for auto ownership,” which means offering expense and loan management and tips and tricks for car purchases, maintenance, insurance, and ownership.

We’re starting with the auto loan refinance process because far too many car owners in the U.S. are paying extremely high interest rates on their loans.

There are over 100 million auto loans in the country, and ~20% of people are stuck with loans that they could refinance to save thousands of dollars.

There’s no way to “unbundle” the initial loan from the car purchase because people don’t shop for loans – they shop for cars.

And dealerships want referral fees from lenders, so they always use the usual lenders that charge high interest rates.

The “loophole” is that if they make reliable payments for 12-18 months, they can refinance their loans at lower rates.

The same is true of car insurance and other expenses associated with car ownership as well.

Our goal is to make this refinancing process much easier for the average car owner and become a trusted adviser in the auto loan space.

I don’t even own a car, but whenever I go home, I hear about constant troubles with insurance and auto loans.

If you’re reading this site, you’re probably not “the average person” in terms of credit, career, and financial situation.

But a huge percentage of the U.S. population has credit scores below 700, and they struggle with high car-ownership expenses.

From Finance to Tech – If You Dare

Since you attended a top business school that is also deeply connected to the tech industry, you’ve probably seen quite a few bankers and consultants move to tech startups.

What would you tell anyone who wants to do this?

A: I would echo the advice of Andy Rachleff (Co-Founder of Wealthfront) to MBA students: join mid-sized companies with momentum.

You’ll get more credit than you deserve by joining a successful company early, even if “early” means being employee #500 out of an eventual 10,000.

When you look for another job, people will assume that you’re competent because you were at a company that did well.

You’re probably not going to join the next Google or Facebook, but it doesn’t matter: even a company that does moderately well is better than a startup that goes nowhere.

You should avoid 5-person startups with no outside funding unless:

Bankers and consultants tend to be much better at growing a business that is already successful, or making that business more efficient.

They are not as good at figuring out product/market fit for brand-new ideas, at least in my experience.

And you spend most of your time at early-stage startups on the product/market fit.

Q: OK, but how do you find these “mid-sized companies with momentum”?

A: It was much harder 10-15 years ago, but now you can find a lot of information on sites like Crunchbase, PitchBook, etc.

But the easiest method is to look at Wealthfront’s list of “Career-Launching Companies,” which they update each year.

To qualify, a company must have:

Find a few companies on the list that match your industry background or previous work experience, and start networking with current employees.

Q: Let’s say that a banker or consultant applied to work at your current startup.

How would you react?

A: I would be scared because we’re not at that stage yet!

We’re still figuring out the value proposition, unit economics, and the exact product we want to bring to the market.

So, we’re too early for most finance/consulting professionals unless they happen to know the car market very well.

If we were at a more advanced stage, I’d give any candidate with this background the following case study:

“Imagine two companies or projects, both with $100 million in revenue and 50% margins.

If you pursue Project A, you can increase revenue by 50% and maintain the same margins.

If you pursue Project B, revenue will stay the same, but you might be able to boost the margins to 75%.

Assuming you’re successful, the bottom line will be the same in either case, so which one do you pursue, and why?”

There is no “correct answer,” but the candidate’s response reveals a lot about their preferences.

And you need both types of projects when building a company; it’s just that they’re useful in different areas and at different stages in the company lifecycle.

Q: What are the best roles for consulting and finance professionals to pursue?

A: Product management is probably the most appropriate role, at least if it’s a “user acquisition” or growth-oriented role.

“Marketing” at a startup usually means working closely with the product team to drive growth, so it might be quite similar to product management.

I would not recommend finance or accounting roles because they’re usually not that interesting at startups unless you like dealing with issues such as sales taxes and VAT.

These jobs might be better if the company is more mature and plans to keep raising funds for acquisitions or other expansion efforts.

Senior-level bankers and traders might be fairly good as individual salespeople, but they probably wouldn’t want to work at an early-stage startup.

Also, sales leadership is tricky because the goal is to boost everyone else’s results – and bankers and traders often operate in “lone wolf” mode.

Finally, strategy jobs at later-stage startups might be good for consultants, but I’d still say product management is a better bet at most mid-sized companies.

Q: Thanks for sharing your views there.

One final question: how does business school factor into this “finance to tech” transition? Is it useful for career changers?

A: An MBA degree is potentially useful, but I’m not sure you “need it.”

You do meet a lot of smart people with different industry backgrounds, so the network alone can make it worthwhile.

But one issue is that only a few schools are ideal for founding or joining tech startups (think: the top MBA programs on the West Coast of the U.S.).

The top schools in other regions are increasingly sending students into tech, but usually at the biggest companies and less so at early-stage and mid-stage startups.

So, those schools can be good if you want a job in technology, but they’re not necessarily the best options for joining startups with revenue and momentum.

Also, if you go the MBA route, it’s easy to get lured back into banking or consulting because you’ve done it before, you can easily tell your story, and firms will be eager to recruit you.

But you should think of that as a “Plan B” if nothing else works out, or if you discover that tech companies and startups are not for you.

Q: Great. Thanks for your time, and good luck with WithClutch!