What Do You Do When You Interview at an Investment Bank and Never Hear Back? 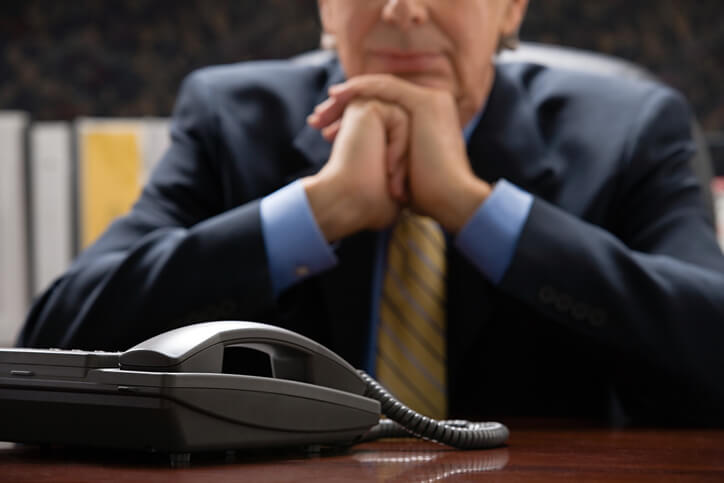 “It was great meeting you – we’ll get back to you in a few days!”

The VP shakes your hand, and you turn around and leave the room.

You walk out of the interview on top of the world.

After studying technical questions for 143 hours and reciting your story so many times that you could walk through your resume in your sleep, you’re confident you knocked this one out of the park.

You get back home and watch some TV to unwind…

And then a day passes.

And then it’s a week…

And before you know it, 2 weeks, 3 weeks, or even an entire month.

And you never hear back from that bank.

So what happened? Where did you go wrong?

Does it mean you got rejected and they’re not telling you? Or are they just disorganized?

And most importantly, what can you do to get a response?

Why You Get the Silent Treatment

Because you’re not the #1 candidate for the position.

If candidates turn down their offers, the bank will approach candidates ranked lower on the list and start making offers to them.

So it’s not that you “failed” the interview – it’s just that other people were more impressive or fit in with the group better.

In some cases, this actually happens because the bank or group is so disorganized that they “forget” to notify you, which is why it’s critical to call back 2-3 days later AT MOST (and ideally before that).

It could even be something stupid, such as the bank losing your contact information or recording the incorrect email address or phone number.

But 90% of the time, it’s because you performed “on par” with other candidates – not poorly enough to receive an outright rejection, but not well enough to win an immediate offer.

So What Happens in Real Life?

Recruiting is at the bottom of the priority list for bankers – they are busy doing deals, winning clients, and otherwise making money.

Sometimes, it’s even at the bottom of the priority list for HR because they’re busy with… afternoon tea time each day? I have no idea, but it sure seems like that sometimes.

Let’s say you go in for Superday interviews with 10 other candidates, at a smaller, regional bank that’s looking to hire 2 interns for the summer.

The reason why one person was the “top candidate” could be completely irrational – he and the interviewers were in the same frat, they had a shared interest in whitewater rafting, or the bankers simply liked the socks he wore.

Or it could be a more legitimate reason, such as having superior technical skills or having the exact deal and client experience the bank is looking for.

In any case, though, HR gathers everyone after the interviews and they start debating who else should receive an internship offer…

But 5 minutes into that discussion, the MD is pulled away because of a client emergency – a deal is falling apart at the last-minute due to a hostile offer made by an activist hedge fund.

Then, the Analysts get yanked away by their VP to finish a pitch book for an IPO bake-off the next day.

So that leaves the VP and Associate, who go back and forth but don’t reach a conclusion – but they’re leaning toward giving offers to 2 of the “4 remaining impressive candidates.”

So, what happens next?

In many cases, nothing at all!

The bank would rather give out 1 internship offer and then sit around and wait on everyone else.

In fact, they may not even deliver rejections to the 5 “not nearly as good” candidates.

Bankers get distracted by fire drills so much that it’s hard to gather everyone together again, so HR has to run between different people to get their views… if they bother to do that at all.

Remember why companies hire you in the first place: to make money, save money, or make a process more efficient.

They may not be paying you much money as an intern, but if they have to spend a lot of time answering questions and “training” you, that costs them time, which is equivalent to money.

It takes them away from deals and clients, which is the last thing any senior banker wants.

Why Not Just Deliver a Blunt Rejection?

The reasons vary, but some banks believe – incorrectly? – that it may be a legal liability to give you a “no” answer upfront.

Meanwhile, other people don’t like to deliver “bad news.”

But the main reason is that it costs the bank nothing to put you on hold and wait for other candidates to respond.

After all, if they give you an outright rejection, that’s it.

But if they don’t get back to you, or they respond to your emails but don’t give you a direct answer, the doors are always open.

And if the Top Candidate unexpectedly turns down his offer and can’t be persuaded otherwise, they’ll need to come back to you and everyone else on their list.

Realistically, What Can You Do About This?

The worst thing to do is to sit around, do nothing, and wait on a response from them.

Undergrads are particularly terrible about this – 90% of our email volume on this question has come from university students asking, “So I interviewed 3 weeks ago but haven’t heard back yet. Should I do anything?”

Yes, and you should have “done something” 2.5 weeks ago.

If you don’t hear back within 2 days, email at least 1-2 of your interviewers to follow-up, thank them again, and express your continued interest in the firm (those exact words can almost be your email template). Send a similar note to HR.

If they respond and they’re still communicating with you, you’re still in the running… whereas radio silence almost always means “no.”

Once you’ve emailed everyone, there are only 3 things you can do to get a response from the bank (and ideally an offer):

1. Win Other, Exploding Offers and Let Them Know About Your Deadlines

Just like the high school social scene, the job search process is also a popularity contest.

The moment you get an offer from another bank, you immediately become more attractive to everyone else and you’re more likely to receive definitive responses.

To turn a “maybe” or “soft no” into a “yes,” though, you need to be certain this bank really is your first choice – and then send a message like the following:

Thanks again for taking the time to interview me last week. I enjoyed meeting everyone, and [Bank Name] is definitely my top choice.

It would be great if you could let me know my offer status at your firm and what else, if anything, you need from me in order to make a decision.

But this is easier said than done, and most likely you’re “on the fence” at a few firms.

2. Become a More Attractive Candidate So the Bank Reconsiders You

This one is tougher because you probably can’t go from “OK” to “spectacular” overnight – but if some time has passed and you’ve genuinely improved, it can work.

Example: One customer last year applied to a bank as part of the lateral hiring process, and made it through several rounds of interviews. Then they asked her to submit a sample financial model she had worked on before.

She didn’t have any great examples due to lack of experience with integrated 3-statement projection models, so they gave her a “soft no” and said that they were some “concerns” over her technical skills.

She then signed up for one of our courses, went through the whole thing, and got much better templates and examples to use – which she then used for a different company.

She went back to the bank and said, “I know we spoke XX months ago and you felt my technical skills were not strong enough. Since then, however, I’ve taken several courses and sharpened my skills, and I’m attaching to this email an example of the work product I can produce.”

Then, they responded and re-started the process, bringing her back for additional interviews.

If they had concerns about something qualitative, like your communication or writing skills, you could attach a report, paper, or presentation you drafted recently.

This is trickier to pull off if they gave you a “soft no” due to “lack of cultural fit” or something else that you cannot easily fix.

But if it is something you can fix, and you’ve pinpointed exactly why they had reservations about you, it’s always worth a shot.

3. Keep Following Up to Ask Exactly Why They Said “No” Directly or Indirectly

HR often gives useless responses, so you should go directly to the bankers you spoke with – and the Analysts and Associates are sometimes more upfront about why you were put “on hold.”

This method also handles the case where something stupid or something beyond your control happened: they lost your contact information, they “forgot” to respond to you, there was a hiring freeze, or the group shut down.

So you need to follow-up anyway – but many people hesitate to ask exactly why they did not receive an offer.

Let’s say you email one of the Associates you spoke with and he says he doesn’t know what your status is… so you call him after another week passes.

You: “I did, and I’m aware I should go to them first, but I wanted to go directly to you and ask you for feedback since you interviewed me.”

You: “I’m aware that I haven’t been officially rejected, but that other candidates probably performed better – I just wanted to know if you had any feedback on what I could do to improve, what would make me a more attractive candidate for your firm, and what would allow you to make a decision more quickly.”

I’ve seen some suggestions that this approach is “too aggressive,” but I completely disagree – if you don’t ask, you’ll never know.

And if it wasn’t an outright rejection, chances are they liked something about you.

Once you get a hint of what went wrong, you can get to work on method #2 above and start fixing the issue – whether it’s your technical skills, a lack of enthusiasm, your communication abilities, or anything else.

Let’s return to that story in the beginning.

Do you really want to spend 143+ hours preparing for interviews, and then fail to get an offer because you’re not aggressive enough with your follow-up afterward?

So right after that VP shakes your hand, don’t just meekly go home and wait weeks and weeks for a response.

Follow-up with him and everyone else within 2 days, AT MOST, if you don’t hear back.

And if they keep stringing you along even after several follow-ups, ask them directly what you can do to improve or what their specific concerns about you are – and then address them.

But you can always accept something else, fix those flaws in the meantime, and make another run at it next time around.

Silence: it may not be golden, but it is beatable.