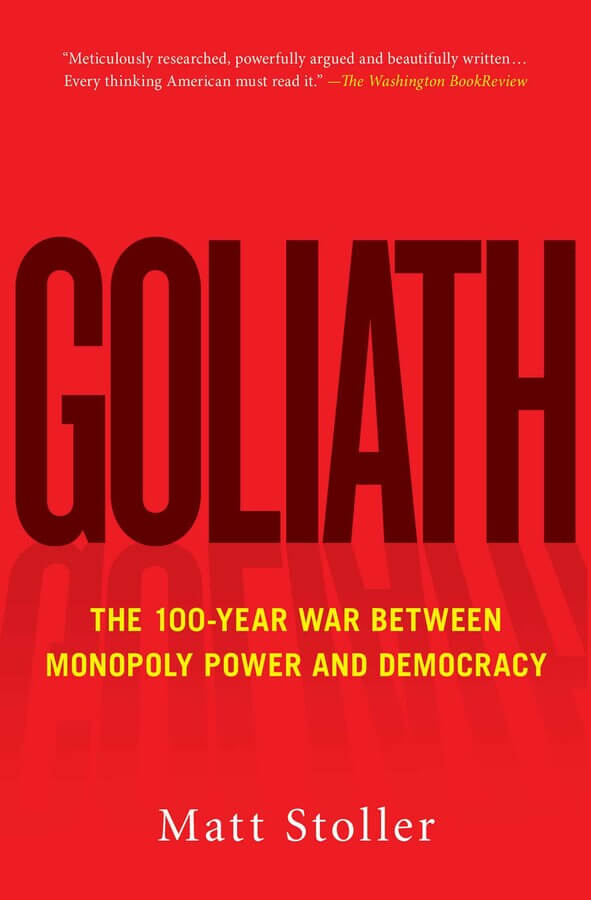 If you’ve been reading this site for a long time, you probably know the truth: I don’t actually “like” the finance industry.

I’m not a typical banker – people usually assume I work at a tech company – and I fell into this career accidentally.

But that also gives me an advantage because I can look at things from a neutral perspective.

I’m fine with reading books that are critical of the finance industry, and I don’t take it personally because many of these critiques are justified.

That thinking led me to Goliath: The 100-Year War Between Monopoly Power and Democracy by Matt Stoller, which re-tells U.S. history through the lens of corporate and financial power.

If you’re reading this site to get recruiting tips, this book has nothing to do with resumes, networking, interviews, or financial modeling case studies.

But it does have a lot to do with long-term career planning and the potential outcomes for different industries:

The Short Version of Goliath… and the Author

Goliath is a long and detailed (600+ page) history book that re-tells U.S. history as a fight between monopolists and anti-monopolists.

It starts in the late 19th and early 20th centuries, with figures like J.P. Morgan and Andrew Mellon, and it traces the struggle through the Great Depression, New Deal, World War II, and the post-war period through the present.

The book’s thesis is that concentrated corporate and financial power does not arise “naturally,” but rather because of specific policy decisions made by governments and regulators; such concentration harms most people via slower wage growth, worse products and services, and fewer advancement opportunities.

Concentrated power may appear to provide some benefit at first (e.g., lower prices from Walmart or Amazon), but the disadvantages only become clear in the long term.

To limit or reverse concentrated power, the government must take an active role in the economy and ensure competitive markets by breaking up monopolies, outlawing predatory pricing, and funding competitors (yes, the U.S. government did this to fight Alcoa’s aluminum monopoly in World War II).

And if the company operates in a market that tends to produce “natural monopolies,” such as utilities, it must be regulated.

Parts of the book go into academic debates over the economy, but more pages are devoted to the key personalities, such as Wright Patman, Andrew Mellon, Ralph Nader, and yes, even junk-bond king Michael Milken.

The author, Matt Stoller, is a progressive Democrat working at the American Economic Liberties Project with previous experience in Congressional committees, but he cares more about economic issues than cultural ones.

It’s a fairly non-partisan book in that he criticizes politicians from both parties while praising others.

It’s less about party affiliation and more about the specific policies the politician implemented.

Overall, I enjoyed the book and agreed with many of the arguments (though not everything).

My top three favorite bits were:

1) Learning About Overlooked Characters and Recontextualizing Others

I studied U.S. history in high school, but I don’t remember reading about 24-term (!) Congressman Wright Patman at all.

But he’s effectively “the protagonist” of Goliath: the political leader who led the anti-monopoly fight by establishing minimum prices for retail products, nearly impeaching Treasury Secretary Andrew Mellon, and restricting the power of large banks.

He successfully fought against a government bailout of Penn Central in 1970, and I’m sure the 2008 bailouts had him rolling in his grave.

In other cases, the book presents familiar figures in a different light.

For example, history textbooks often portray Theodore Roosevelt as a “populist trust-buster,” but this is not quite correct.

T.R. did initiate some anti-trust efforts, but he favored big business as long as the federal government controlled these big companies.

The author also argues that figures like Ralph Nader, known for “protecting consumers,” actually contributed to concentrated corporate power in the modern era.

Nader and others in his movement reasoned that it would be easier to protect consumers from a few large companies than thousands of smaller ones, so why not embrace big companies?

Especially among right-leaning and libertarian economists, there’s a perception that “things just happen” in the economy.

So, if large corporations take over markets, they were more efficient or out-performed smaller firms.

Goliath challenges this view by pointing out the specific laws and enforcement policies that resulted in chain stores and other monopolies forming.

These rules prevented companies like Walmart from entering markets and selling products below-cost to drive out smaller competitors.

But in 1975, Congress repealed these laws, and it’s no coincidence that Walmart’s growth exploded in the following decades.

3) All This Has Happened Before, and All This Will Happen Again

…but their precursors have existed for over a century.

For example, long before “roll-up” strategies became popular, “trusts” in the late 19th century allowed financiers to acquire competitors and do the same thing.

In the 1960s, “conglomerates,” in which one company acquired other companies in different markets, came about specifically to evade anti-trust laws.

Another example is how politicians have often campaigned on emotional, cultural issues while giving large corporations even more power.

In the 1960s and 1970s, this took the form of protesting the Vietnam War while looking the other way regarding banking regulation and monopolies.

I’m not going to explain the form this takes today because it will spur a bunch of angry comments, but anyone with a brain can see what’s happening.

And Your Greatest Weaknesses

The overall balance and pacing of Goliath seemed “off.”

For example, Stoller spends a lot of time discussing Chicago School economists like Milton Friedman and how their neoliberal ideas seeped into the mainstream.

But then he rushes through the past few decades, including the rise of the tech giants.

I’m guessing that modern audiences probably care more about Google, Facebook, and Amazon than they do about economists arguing with each other in the 1960s.

Also, reading this book in 2021 felt a bit “dated” because it was first published in late 2019, just before the pandemic.

I realize that the author and publisher had no control over this, but I hope a future update will address some of what has happened since March 2020.

The ridiculous interventions by governments and central banks have shifted even more power to tech monopolies, although there are signs of push-back.

My biggest issue with the book, though, is that it’s too narrow because it sticks so closely to its narrative: that concentrated corporate and financial power, alone, explain virtually everything wrong with society today.

As I read each chapter, I kept thinking, “OK, he makes some good arguments, but what about the counterfactual?”

Sure, concentrated power plays a role, but what about globalization, labor unions, and monetary policy?

Can you blame monopolies for 100% of wealth and income inequality when the Fed is effectively providing welfare for the wealthy?

And sure, you could blame the government for allowing Facebook’s acquisitions of Instagram and WhatsApp, but wasn’t the company already slanted toward monopoly status due to the built-in network effects?

I would have liked some discussion of alternate explanations and why the author felt they were not compelling or simply part of the same big issue.

Finally, the book touches on interesting ideas throughout but doesn’t always develop or support them with data.

For example, the author repeatedly cites a link between the rise of fascism in Germany and the concentration of various industries there, but he doesn’t offer data to back it up or explain the link in more detail.

I’ll now attempt to make this book review more relevant for the general content of this site:

1) It Takes a Crisis to Regulate and Break Up Companies, but Regulations and Enforcement Wane Gradually Over Time

In the late 19th and early 20th centuries, large corporations and financiers gained more and more power until a serious crisis struck: the Great Depression.

That enabled a new government to come in and start restricting corporations and financiers, and laws that would have never passed in 1920 were easily passed in 1935.

In the decades after this crisis, regulations and enforcement persisted for a while, but they faded throughout the 1960s and 1970s before giving way to the excess of the 1980s (and everything since then).

But there was no single event or crisis that killed regulations and anti-trust.

So, I doubt that anything major will change in today’s finance industry anytime soon.

When another crisis rolls around, though, who knows.

The deals were smaller, bankers earned less, and the power dynamic between bankers and companies shifted in favor of companies, but the industry still existed.

Regardless of whether an industry has 1,000 companies or 10 companies, some of those companies will still need to raise capital to grow.

I’m more skeptical about the future of other sectors within finance, such as private equity and hedge funds, as they don’t necessarily “need” to exist.

3) Institutions Are Useless Without the Right People in Charge

Woodrow Wilson attempted to limit corporate and financial power in the 1910s, but he kept making implementation mistakes.

After establishing the Federal Reserve, he allowed the private bankers running it to have too much power, and when he took the U.S. into World War I, he allowed the monopolists to benefit far too much from wartime production.

You see this today with agencies like the FTC: no one took it seriously for years (decades?), but with Lina Khan now in charge, the tech companies are starting to realize they’re at risk of being broken up or regulated.

So, even if the finance and tech industries get regulated more heavily, it will be more complicated than a “Here’s how Industry X died” story; there will be spurts of competency and incompetency and periods of strict vs. relaxed enforcement.

Last year, I thought the pandemic itself might force serious economic changes.

Instead, it reinforced the status quo: growing wealth and income inequality and mega-corporations becoming even more “mega.”

As a bonus, controversial policy decisions around lockdowns and mandates encouraged normal people to view other normal people as “enemies” while distracting them from the elites grabbing power and money.

So, I think there will have to be another crisis for anything meaningful to change.

I don’t know if this next crisis will be Covid 2.0, Great Depression 2.0, Stock Market Crash 7.0, Climate Change 1.0, Aliens Land on Earth 1.0, or something completely different.

Until that happens, you’re probably safe applying for finance jobs in the near term.

But if the aliens arrive sooner than expected, you might want to read Goliath to get some ideas about what to do next.