Over the past week, there has been a ton of speculation on social media that Credit Suisse – and possibly also Deutsche Bank or UBS – is about to have its “Lehman Brothers” moment.

If you’re reading this right now, you’re probably too young to remember what happened, but the Wikipedia article about the 2008 financial crisis has a good summary.

In short, a gigantic housing bubble in the U.S. burst, banks that bet heavily on “subprime mortgages” to support this bubble started collapsing, and in September 2008, Lehman Brothers – formerly one of the biggest investment banks – went bankrupt.

Everyone knew the bank was troubled throughout 2007 and 2008, but most people assumed the government would bail it out, as it had already done for Bear Stearns.

Instead, the Federal Reserve shocked everyone by allowing a bankruptcy, which soon turned into the largest in U.S. history (involving over $600 billion in assets).

Meanwhile, Barclays and Nomura acquired Lehman Brothers’ investment bank in different regions, and Barclays turned itself into a bulge bracket bank like that.

Many of the same things that happened to Lehman in 2008 have been happening to Credit Suisse and Deutsche Bank in 2022: 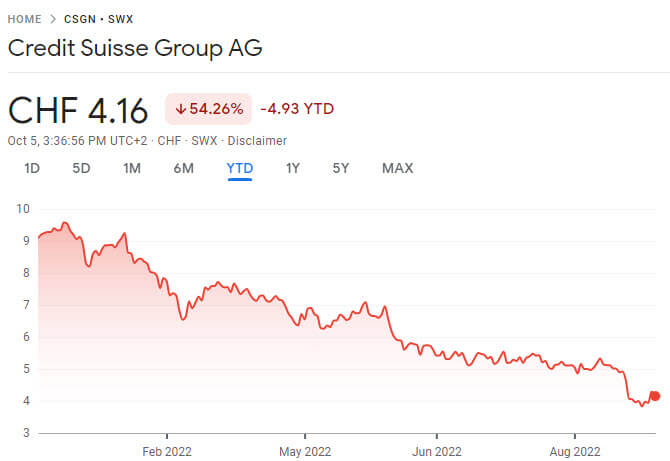 The short answer is that it’s very unlikely that any of these firms will go bankrupt .

But a spin-off, divestiture, restructuring, or another major event is likely:

The European Investment Banks: How Did We Get Here?

Credit Suisse, Deutsche Bank, and UBS have all underperformed the U.S. banks since 2008, to the point where they’re now considered “lower-tier” bulge brackets.

There are also bank-specific factors. I’ll focus on CS here to make this a shorter list:

The bank plans to reveal a turnaround plan on October 27th, which might include job cuts, asset sales, spin-offs, and maybe a fresh capital raise.

The CEO also sent out a letter this past weekend pointing to the bank’s “strong capital base and liquidity,” which completely backfired and made more people doubt the firm.

“All rumors are false until officially denied.”

When analyzing these situations, I prefer to focus on the numbers rather than rumors and fearmongering on social media.

But we need to cover some quick FIG accounting to explain the comparison between Lehman and CS first.

All banks must maintain a minimum amount of Common Shareholders’ Equity (CSE) relative to their Total Assets or “Risk-Weighted Assets.”

In addition, all banks have a contra-asset called the “Allowance for Loan Losses” that represents the losses the bank expects to incur on its loan book. 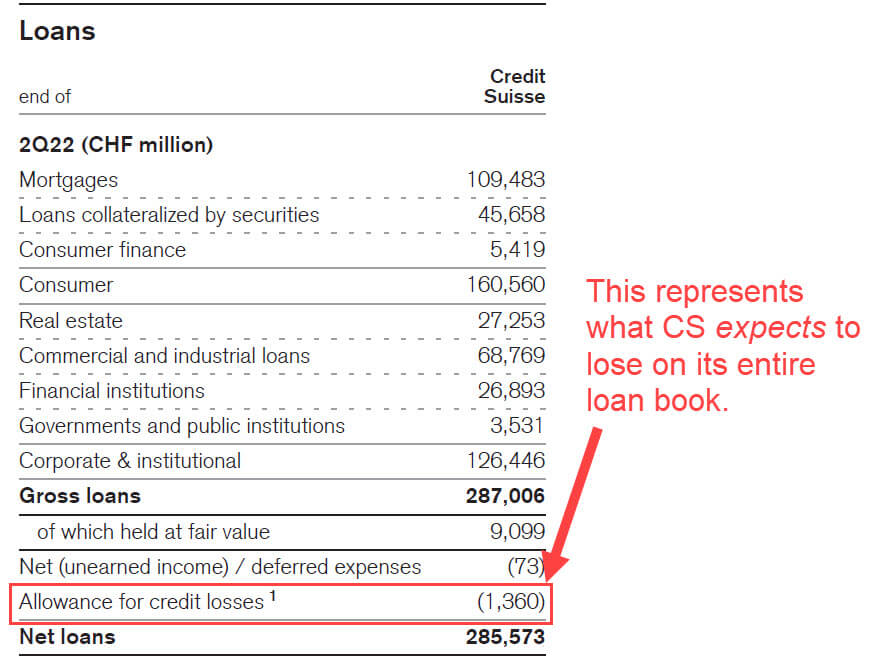 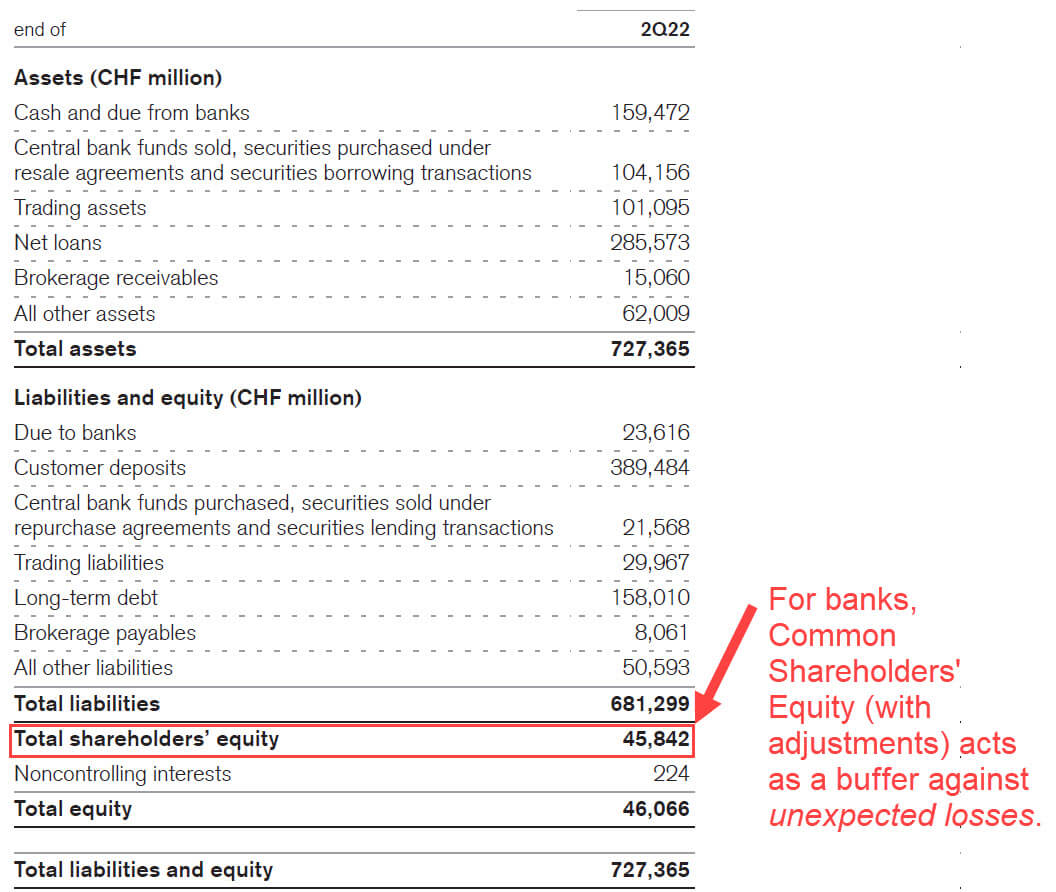 If a bank expects to lose more on its loans, it records that in the “Provision for Credit Losses” on the Income Statement; unexpected losses also appear here because it increases its Provision to reflect them.

Since unexpected losses affect the Income Statement, they reduce the bank’s Net Income and, therefore, its Common Shareholders’ Equity (CSE).

The problem is that if this CSE reaches $0, other parts of the Liabilities & Equity side of the Balance Sheet must “absorb the losses” as the Assets side keeps decreasing.

“Other parts” means “Debt and other funding sources, AKA the creditors” (bad) or “Deposits, AKA the bank’s customers” (really bad).

To avoid this scenario, banks must maintain their CSE – and variations like Common Equity Tier 1 (CET 1) and Tangible Common Equity (TCE) – at or above certain levels.

After the 2008 crisis, regulators also added rules about the bank’s “stable funding” sources (the Net Stable Funding Ratio) and the bank’s liquidity (the Liquidity Coverage Ratio).

Assuming a bank reports its results honestly, we can use these ratios to assess its risk.

In short, Credit Suisse is in no way comparable to Lehman Brothers.

Many of these ratios did not exist when Lehman went bankrupt, but if the LCR or NSFR had existed, Lehman’s would have been dangerously low (far below the 100% minimum).

That’s why Lehman failed: its short-term funding sources dried up as counter-parties lost faith in the bank, and it had minimal customer deposits for long-term funding.

By contrast, CS relies far more heavily on deposits than Lehman, and it uses ~2x less leverage (as measured by CSE / Total Assets and the related ratios).

Many of CS’ debt instruments can also be converted into equity if things get dire enough; they’re even labeled “Bail-in debt and other instruments”: 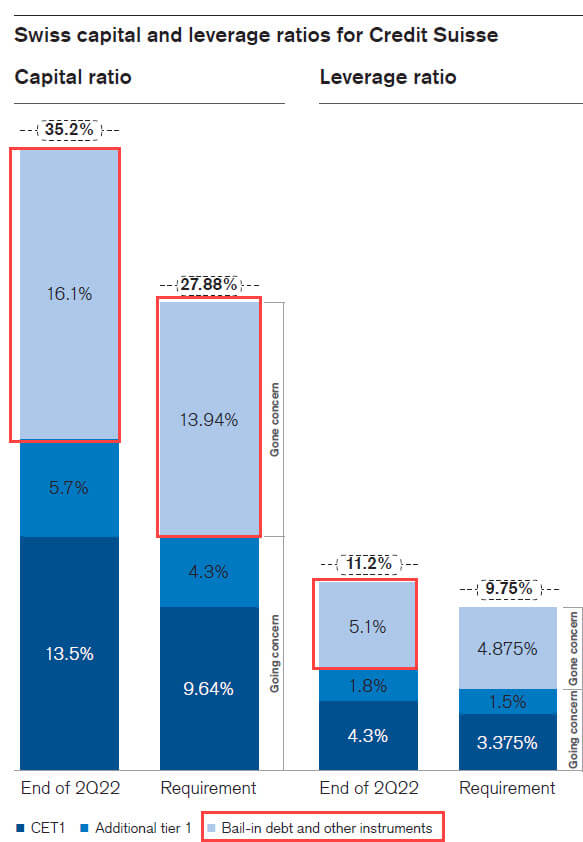 If regulators decide the company needs more equity, they can force a conversion of these instruments so that creditors take the loss.

They did this with Monte dei Paschi in Italy in 2016, although some argued it was more of a bail-out than a bail-in.

But What About the Credit Default Swaps?!! This Guy on Reddit Said…

Yes, I agree, the spreads on 5-year CS credit default swaps – which measure credit risk – have surged by 4-5x since January: 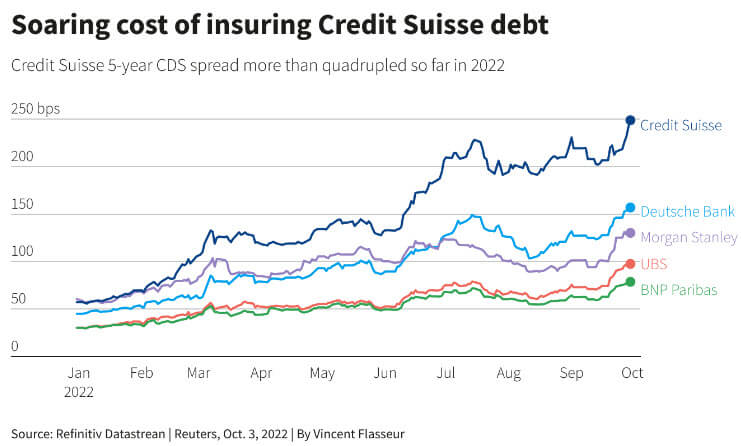 But the implied default probability is still low – something like ~5% within the next year.

Also, note that plenty of banks have had their CDS spreads blow up, and nothing has necessarily happened. One example was Morgan Stanley back in 2011.

Rising spreads can indicate troubled companies, but they tend to overestimate default probabilities because speculators often get overzealous when rumors spread.

Why I’m Skeptical of a Collapse But Not Other Events

Besides the quantitative differences above, there are some other important differences.

First, in 2008, the large banks were at the center of the subprime mortgage crisis.

This time around, some banks have made bad decisions, but they’re caught in the crosshairs of various other crises (inflation, energy, Ukraine, supply chain, currencies, etc.).

So, I’m not sure the general public would “blame” a failing bank for its failures quite as much as it did in 2008.

And after seeing the aftermath of Lehman, I doubt any regulators want to repeat the incident.

For CS or DB or any other large bank to outright fail, there would have to be something like major fraudulent activity at the highest levels… and incompetence does not equal fraud.

With all that said, these European banks will likely experience one or more major “events” very soon.

What If You’re About to Start Working at CS or DB or Another “Troubled Bank”?

I can’t say much here because the job situation depends completely on the outcome of whatever happens to these firms.

There is precedent for banks rescinding summer internship and full-time offers in crisis years, but it didn’t happen in 2020 – contrary to my expectations.

If there is a divestiture of the IB group at one of these firms, you’ll probably be fine in the short term, even if they move to “cut costs” in the longer term.

If there is an actual liquidation or government-forced wind-down, you will not be fine (but, again, this seems incredibly unlikely).

So, should you start looking for other internships or full-time jobs to hedge yourself?

Unfortunately, it’s a bad time to look for other jobs because banks, tech firms, and other desirable workplaces have been announcing job cuts and hiring freezes.

Also, “full-time hiring” for banks doesn’t exist much outside of bringing back summer interns who performed well.

So, you could certainly reach out to your network and ask about other openings, but your time might be better spent looking at non-IB roles, such as ones at normal companies or even in corporate/commercial banking.

If you’re already working full-time at one of these firms, it’s a decent idea to reach out and start asking about other opportunities, but I don’t think you need to enter “panic mode” yet.

The biggest risk isn’t that one of these firms will collapse, but that in the long-term, it de-emphasizes groups such as IB even more.

So, from a long-term career perspective, you might be better off elsewhere, even if it makes sense to stay there in the short term.

I’ll close with a disclaimer: I have a mixed track record with major predictions.

For example, in the middle of 2008 – when this site was less than a year old – I thought the U.S. government would not let Lehman Brothers fail.

I even mentioned this in a few reader emails, including in one message to a person with an offer there (oops).

In 2020, I thought banks would rescind internship offers due to COVID, but they kept the internships and made them all “virtual.”

I was closer to the mark on other predictions (Brexit, Trump, etc.), but I’ve certainly been wrong on some major issues before.

All that said, I think that social media has been overreacting to this one… and most bankers seem to agree.