Core Real Estate: What It Is, and How to Explain It in Real Estate Interviews 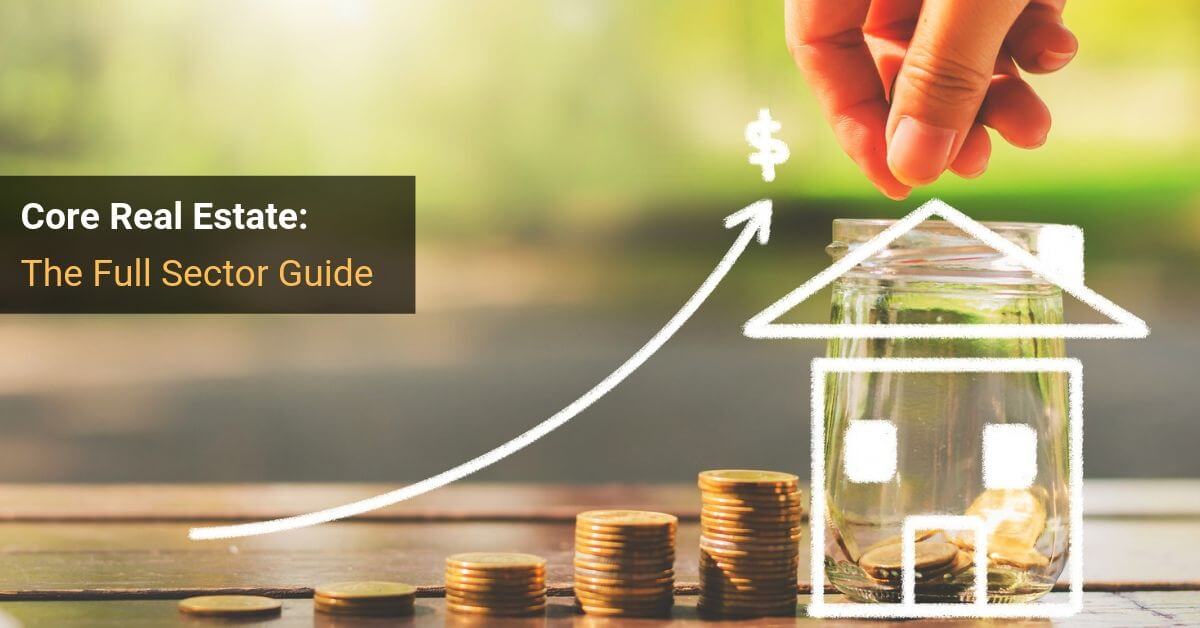 When you dig into real estate financial modeling and real estate market analysis, you’ll come across the term “core real estate” all the time.

It’s one of several strategies that real estate private equity firms (and other types of investment firms) follow to acquire, operate, and sell properties.

“Core” is considered the safest strategy and the one that’s closest to fixed income (bonds) in terms of risk and potential returns.

It tends to use less leverage than other strategies, very little about the property changes, and cash flows are stable and predictable.

So, what could go wrong?

If you go by most online descriptions and explanations of this category, you might say, “Nothing – it sounds pretty simple.”

But as you’ll see, there are some subtleties that most sources gloss over:

The four main ways to invest in individual properties in commercial real estate are:

You can see the risk and potential returns of these strategies here (“Core Plus” would be just to the right of “Core Real Estate”): 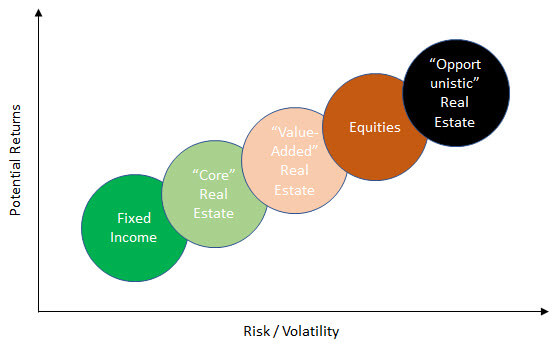 In practice, most private equity firms focus on the riskier strategies here because “Core” deals often lack the potential to produce the returns they are seeking.

The likely IRR of many Core deals is in the high-single-digit range, while PE firms often aim for 15-20%+ returns.

So, even if a PE firm claims to do Core deals, most likely, it is also pursuing Core-Plus deals – or it is acquiring properties at a low point in the market cycle.

What Makes These Categories Different?

Many articles highlight the following points as differences between Core, Core-Plus, Value-Added, and Opportunistic deals:

And I’ve created multiple versions of our Real Estate Financial Modeling course based on case studies and modeling tests given in real interviews.

Based on that, I do not agree with all these points.

For example, I’ve seen plenty of “Core” and “Core-Plus” deals that use higher leverage, such as 50-70%, as long as the credit stats and ratios remain healthy at those levels.

This higher leverage is partially because interest rates have been very low in the decade or so following the 2008-2009 financial crisis (see: more on commercial real estate lending and real estate debt funds).

The holding period also varies quite a bit, and in real life, it often comes down to “We’ll sell as soon as we get a good price.”

Many Core properties are in major urban centers, but the location alone isn’t the best way to differentiate these categories.

Finally, Core properties do generate more stable cash flow than the others, but it’s not necessarily the case that most of the returns come from cash flows in the holding period.

For example, when the real estate market is at a cyclical low, many investment firms will acquire underpriced, stable properties.

Then they’ll wait for prices to increase and sell the properties later in the cycle so that a majority of their returns comes from capital appreciation.

This strategy becomes less feasible as the cycle progresses, so many investors switch to Value-Added and Opportunistic deals instead.

The bottom line is that you should distinguish strategies according to what the investor/owner DOES during the holding period: if the property barely changes, it’s a Core deal.

It’s more accurate to say that the market environment and timing play a bigger role in returns for Core deals than they do for deals in the other categories.

This makes the Core category great for passive investors who don’t want to be involved in day-to-day management, but not so great for anyone buying at the top of the cycle, or anyone who wants more control.

To illustrate, we’ll look at example returns from a Core deal for a multifamily property (apartment building) in several different market environments.

These examples are based on a modified version of one of the samples in the real estate pro-forma article.

The Debt Service and Capital Costs stay the same in all cases, but the Net Operating Income (NOI) growth and Exit Cap Rate change based on the market.

In this case, the property’s NOI grows at 3-4% per year, and the Exit Cap Rate rises modestly to 6.5% because the property ages and does not undergo major improvements: 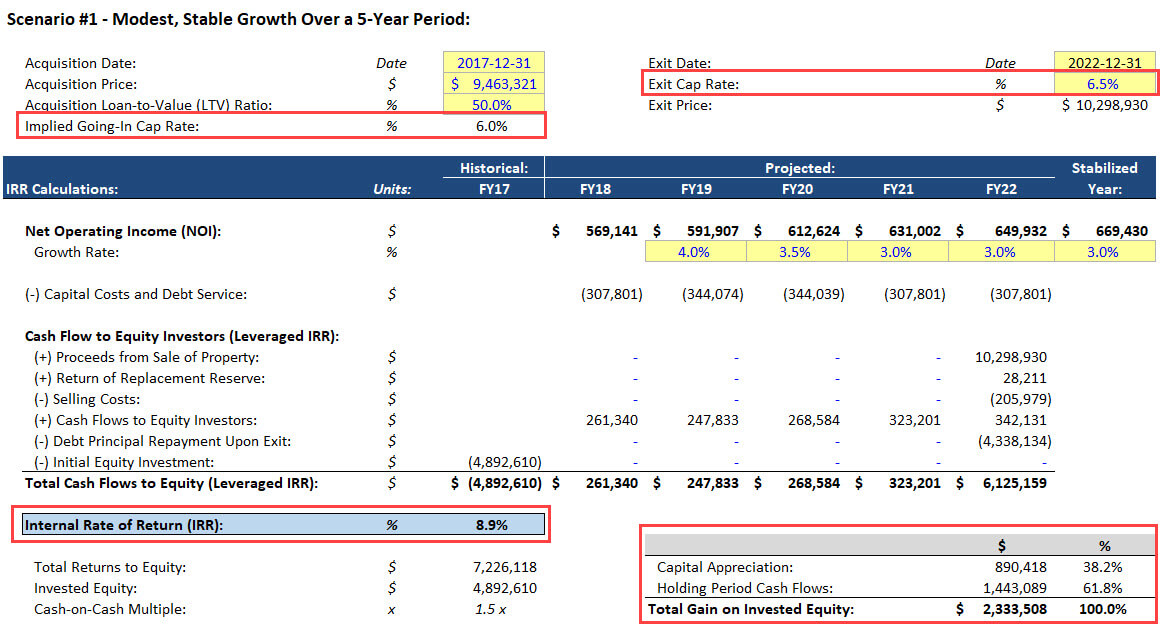 As expected, the IRR is in the high single digits, and most of the returns come from cash flows during the holding period.

Most online descriptions of Core real estate stop here, but it’s more complicated than this because the market could also change during the holding period.

In this scenario, we assume that we acquire the property toward the bottom of the market cycle, and then we sell it after prices have risen for several years (i.e., falling Cap Rates).

NOI growth is also higher than normal in the first few years as the market recovers: 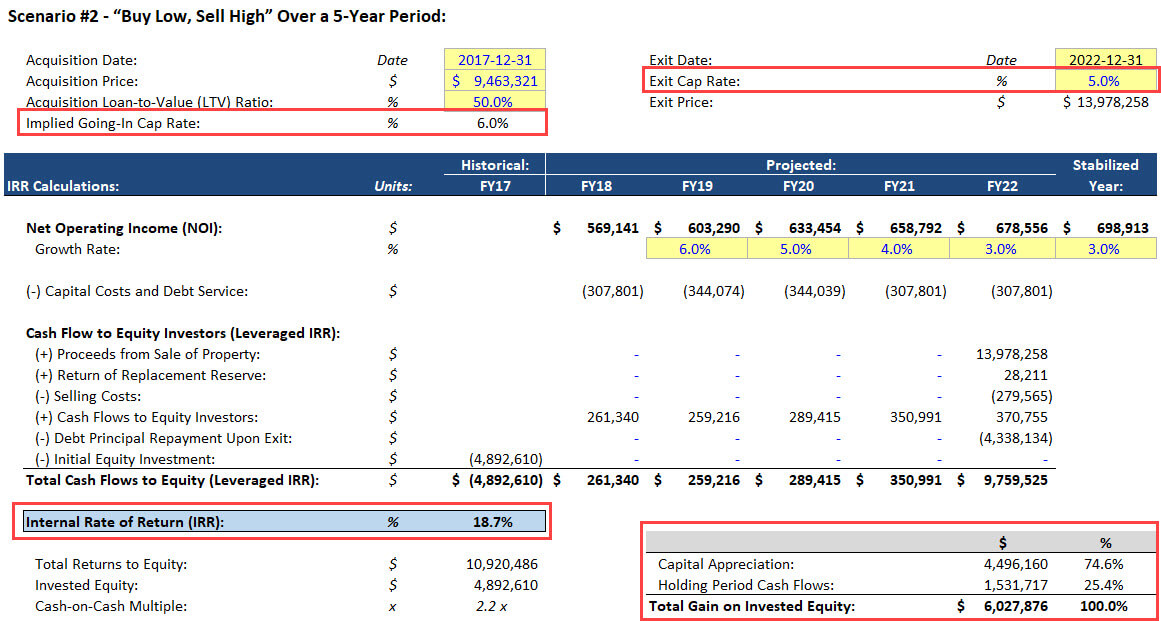 This deal now looks much different, with an IRR of 19% and 75% of the gain from capital appreciation instead.

It’s not implausible to acquire a property at a 6.0% Cap Rate, make no major changes, and sell it at 5.0%, but usually it only happens in a high-growth market with a supply/demand mismatch.

If you present an analysis like this for a Core real estate deal, people will naturally be skeptical unless you have a lot of data to support your argument.

In the final scenario, we’ll assume that we get unlucky and happen to acquire the property right as the market is starting to decline.

As a result, the Cap Rate rises by the end, and NOI grows more slowly: 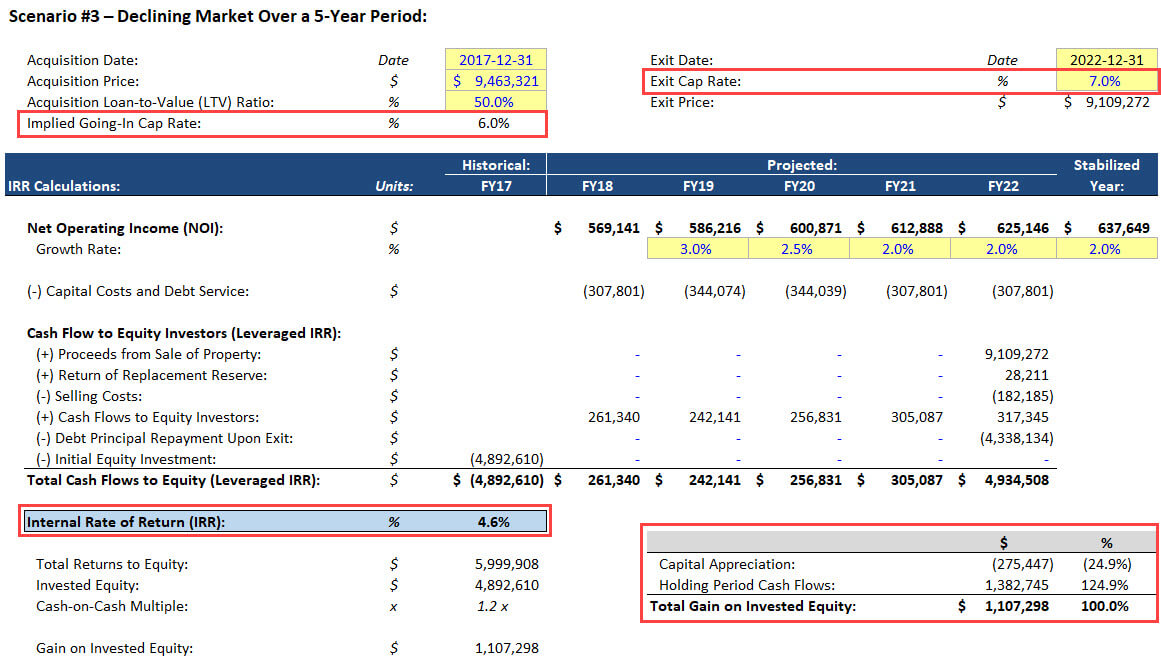 This deal now looks far worse, with a 5% IRR and a capital loss because of the rising Cap Rate.

That said, it’s still not a “disaster” – we still avoid losing money because of the stable cash flows in the holding period.

Even if NOI declined modestly for 1-2 years and then began to grow once again, the IRR would still be positive.

The point of these examples is to illustrate that Core deals are far more dependent on the market environment and timing than the other categories.

Yes, if everything is stable, a high-single-digit return is a likely outcome, and most of the gains will come from the property’s cash flows.

But if not, the range of outcomes is quite wide, and the owner or investor has limited control over the results.

Core Real Estate Careers: Why Work in the Field?

As mentioned above, this is not a true “choice” because many real estate investment firms use different strategies.

However, it’s fair to say that groups or firms focusing on Core strategies are best if you enjoy market analysis and finding properties and regions that might be underpriced.

You won’t necessarily be building the most complex models since the acquired properties largely stay the same.

But you will need to understand market cycles, demographics, and supply/demand to make the right decisions.

Many conservative investors such as pensions and endowments also like Core real estate because of the perception that it’s a “safer” asset class that still offers higher annualized returns than most fixed-income securities.

So, if you do end up focusing on Core real estate, it might be at one of these of firms – which means lower pay, but also reduced hours and stress.

Why Invest in Core Real Estate?

For individual investors, Core real estate is appealing for all the reasons mentioned above: the potential for high-single-digit returns, the ability to be relatively passive, and relatively low risk even if the market declines.

The S&P 500 has a higher average annualized return if you invest in an S&P index fund and hold it for decades, but it also fluctuates significantly from year to year.

By contrast, Core real estate returns tend to be much smoother, and they often stay positive even when equity returns fall off a cliff (as in the 2000 – 2002 period).

This graph from Real Estate Crowdfunding Review sums it up pretty well: 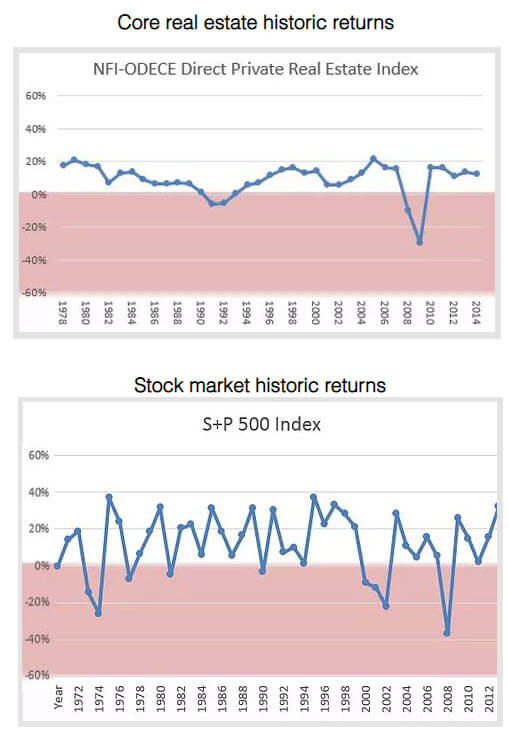 Yes, I’m aware that the graph dates are mismatched, so you can’t directly compare them – but the point is that S&P 500 returns fluctuate far more.

Core real estate has deep drawdowns as well (see the 2008-2009 numbers above), but they tend to be less frequent and severe than the ones in equities.

Skin in the Game: Why I Invest in Core Real Estate

In the interest of full disclosure, I like Core real estate as a category and have invested in it via sites such as Fundrise.

Around 5-10% of my total assets are in real estate equity funds or individual properties, and a good portion of that is in the “Core” category.

I do it for the reasons described above: stability, the passive nature, and fairly good risk-adjusted returns.

The downside is that liquidity is limited because selling a property or redeeming shares in a fund are much harder than selling publicly traded shares or bonds.

But I’m willing to accept that if it means positive returns in a year when most other markets are down.

That’s about it for the Core real estate category.

Coming up next, we’ll move into the Value-Added and Opportunistic categories and (maybe) look at Core-Plus as well.