Uber Valuation: The Most Overhyped Company Ever? 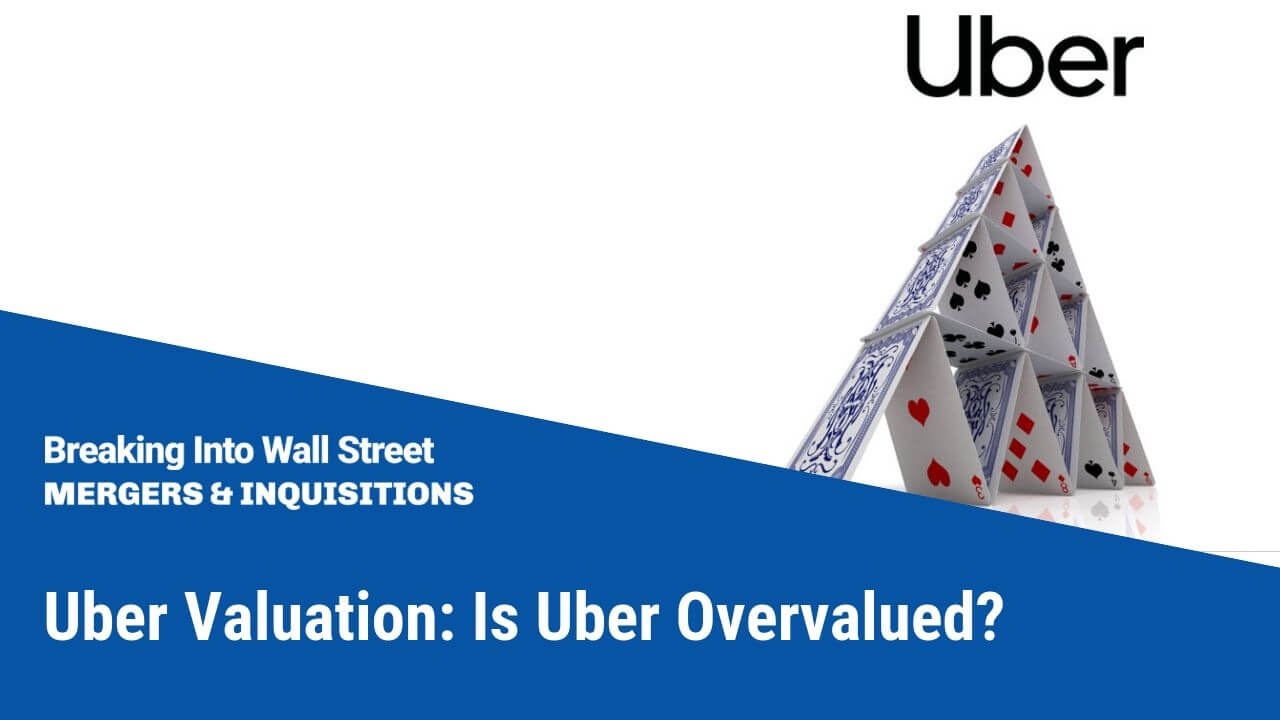 Ah, the Uber valuation: the one topic that never seems to die.

Despite all the controversies, executive turnover, ethical “issues,” lawsuits, and other drama, everyone comes back to the same question with this company: what is it worth?

Others argued that the company had unlimited potential and might be worth $1 trillion one day.

But the company’s IPO lets us perform a reality check and see which side is more likely to be right:

Uber Valuation: The Video, the Short Answer, and the Full Tutorial

Disclaimer: This article is not “investment advice.” It is for informational and illustrative purposes and represents only my own opinions and analysis. Seek a licensed professional to make investment decisions, and do not regard this article as advice or a recommendation regarding any securities.

The short answer is that I don’t think Uber is worth anywhere close to its IPO price of $45.00 per share (~$83 billion market cap).

There is a small chance that the company’s current share price range of $40 – $50 per share is reasonable if you make some optimistic assumptions about its future cash flows and minority-stake investments.

I spent a week digging into the company’s numbers and building a DCF model for it, and you can see the results in the YouTube video below (click here for the direct link):

You can download the Excel file and PDFs below:

NOTE: There is a small mistake in the WACC tab in cells F69, H69, and J69. The capital structure percentages there should be averages of both “mature” sets of companies.

It affects the final Discount Rate by less than 0.10%, and I didn’t want to redo the entire video and presentation to fix it, so I left it in.

How to Think About Uber as Company

Uber is tricky to pin down because it has different business lines, operates in different geographies, and also owns significant stakes in many other companies.

We’d say it’s a mix of a transportation company, a marketplace company, and a food delivery company: 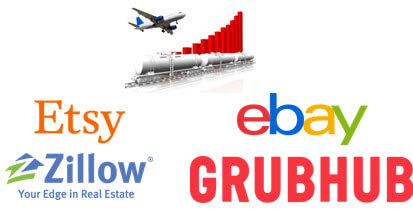 We approached the valuation by thinking about where Uber is today and where it might be in the future – a more mature marketplace company like eBay, or a more mature trucking/logistics company.

We reviewed these mature companies’ financial and market stats and projected Uber’s revenue and expenses such that it resembles those companies in the long term.

This was more difficult than it sounds because Uber’s S-1 filing was borderline useless.

It’s 396 pages of bold claims and confusing data, signifying nothing.

There were so many omissions and problems that someone else made a list of them.

Still, we had to do something, so we split the company into Ridesharing + Uber Eats in one segment and Uber Freight in the other segment.

Yes, it would have been better to create three segments, but the way they disclosed data made that impossible.

On the Ridesharing + Uber Eats side, Revenue is driven by:

On the Uber Freight side, we assumed a Market Size and Growth Rate for freight shipping in the U.S. + Europe and a Market Share for Uber.

For both segments, the segment-level operating income (“Core Platform Contribution Profit / (Loss)”) is a simple percentage of revenue because there was no way to do anything better with the available data.

We then created Downside, Base, and Upside scenarios:

All these numbers come from somewhere.

For example, eBay had around 180 million active users at this time, which was 7-8% of the total population in its countries of operations.

So, we assumed that Uber grows its userbase from ~2% of the population in its countries of operation (currently) up to 4%, 5%, or 10% over 20 years, depending on the scenario.

Mature transportation companies often have EBITDA margins in the 10-15% range, so we assumed that Uber reaches that level… in a decade or two: 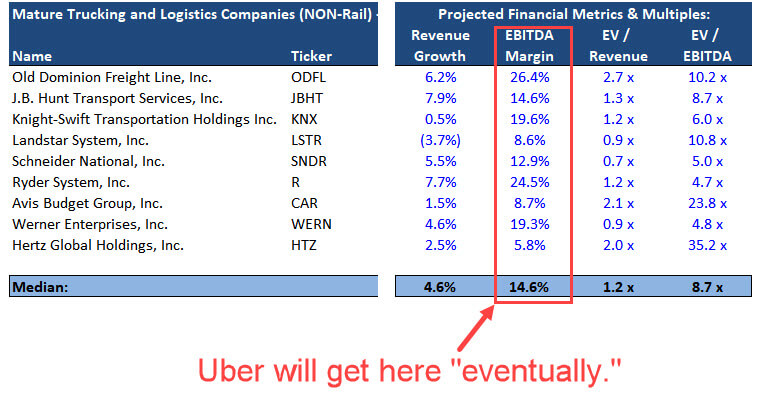 And since Uber claims that its Ridesharing + Uber Eats bookings represent only ~1% of its serviceable addressable market (right…), we assumed that it captures anywhere between 6% and 20% of it over 20 years.

The statements in the S-1 filing also inform the near-term trends in these metrics. For example, take a look at this one about Bookings per Trip:

Based on that, we assumed that Bookings per Trip will likely decline in the near term, but rise in the longer term due to inflation and a maturing food delivery business.

The same applies to the “Core Platform Contribution Margin”:

Yes, it was positive 9% in its Ridesharing segment in the last fiscal year… but that seems like an aberration.

Other Assumptions for the Uber Valuation: Uber Freight and Entire Company

We also created scenarios for the Uber Freight division and the company as a whole:

The S-1 filing gave little insight into the Uber Freight division, so these numbers are more speculative than the ones above.

The most important assumption here is for the company’s “Unallocated Expenses.”

Some of these expenses relate to Uber’s self-driving car research & development, and others relate to insurance and general & administrative expenses.

The company also points out, repeatedly, that it is profitable… if you ignore these “corporate overhead” expenses.

Given those historical trends – and since we’re not factoring in self-driving cars directly (see the bottom of the article for more on this) – we think it’s reasonable to assume that this item will continue to decline as a percentage of revenue.

Will it reach only 3% by Year 11 of the projections, as we assumed?

I’m not sure, but this line item needs to decline significantly, or the company-wide operating margin will never turn positive.

Yes, eBay and Cars.com have margins of 30%+, but Uber’s cost base will always be higher than those companies’, and many mature transportation companies are in the 10-15% range (see the screenshot above).

It’s possible that Uber will never achieve a positive operating margin, but the numbers don’t work if you make that assumption.

If you made it to page 373 of the company’s S-1 filing without falling asleep or killing yourself, you would have seen that it has a huge Net Operating Loss balance:

But many of these NOLs start expiring in 2019, which is why the amount shown on the Balance Sheet is far less than 25% * $10 billion:

Since the State NOLs are likely to expire unused, we counted only the Federal NOLs in the cash flow projections.

If any NOLs remain at the end of Year 20, we add their Present Value to calculate the Implied Enterprise Value.

Yes, Lyft is the most similar public company, but it had only been public for less than ~2 months, which did not provide enough data to calculate Beta.

And all the other ridesharing companies were still private, so it wasn’t possible to use them.

The Cost of Debt is murky because we don’t know the fair market value of the company’s Senior Notes or Convertible Notes, but we made reasonable guesstimates:

The most interesting part of this analysis was that the Discount Rate did not differ that much between “high-growth” and “mature” companies.

Those rates may seem low, but remember: despite losing massive amounts of money, Uber is not a “startup” anymore.

The Terminal FCF Growth Rate ranged from 0% to 2%, depending on the scenario, while the Terminal Multiple went from 6.6x to 8.7x, in-line with the multiples of the more mature companies:

Since the PV of the Unlevered FCFs is negative in the Base and Downside cases, the analysis is highly dependent on the Terminal Value and Uber’s current Balance Sheet.

Why I’m Not Shorting Uber – Despite Everything Above

Any valuation of Uber suffers from a “house of cards” problem: a huge part of its potential value comes from its Equity Investments (minority stakes) in other ridesharing companies like Didi, Grab, Yandex Taxi, and Careem: 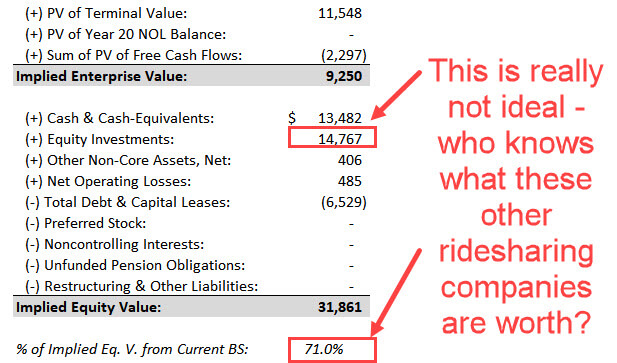 (For more on this topic, please see our tutorial on the equity method of accounting.)

And if it goes poorly, the house of cards comes crashing down on your head and kills you:

While I have a good track record with individual company stock pitches, I feel far less confident in macro analysis of entire sectors, so I can’t say how this one will go.

Also, there may not be any near-term catalysts that push down the company’s stock price.

Overhyped companies like this can stay mispriced for long periods until something dramatic happens, and I’m not sure when that will happen or what it will be.

Wait, What About Self-Driving Cars? They’ll Change Everything!

The Uber bulls will read everything above and say, “But self-driving cars will change everything! Robots will replace humans! AI will change the world! The company will reach 90% operating margins once it no longer needs to pay drivers!”

First of all, self-driving cars are nowhere near ready for worldwide, mainstream adoption (source: the CEO of one of the leading companies in the field).

They’re decades away, not months or years away.

But even if we assume that engineers eventually solve all the technical challenges, the financial picture does not necessarily change.

If it switches business models and builds or purchases self-driving cars instead of using human drivers, its Operating Expenses shift to Capital Expenditures.

Yes, that still gives the company a long-term cost advantage, but how much will it be worth in today’s dollars if that transition happens in 20-30 years?

Technology does not change the time value of money.

People on both sides of the Uber debate have used various arguments to make their cases – some very qualitative, and others based on data.

I focused on the numbers above, but gut feeling also matters because valuation is an art, not a science.

From that perspective, the argument against Uber is simple:

If taxi companies had had solid mobile apps from the start, would Uber have taken off?

And has Uber done something completely new, or did it take advantage of a broken market and poor service from legacy providers?

You can guess my answers to all three of these.

Put simply, Uber is a far less transformative company than Google, Facebook, or even eBay.

I don’t necessarily think it will die, or even stagnate, but I also think it’s worth far less than its current share price.