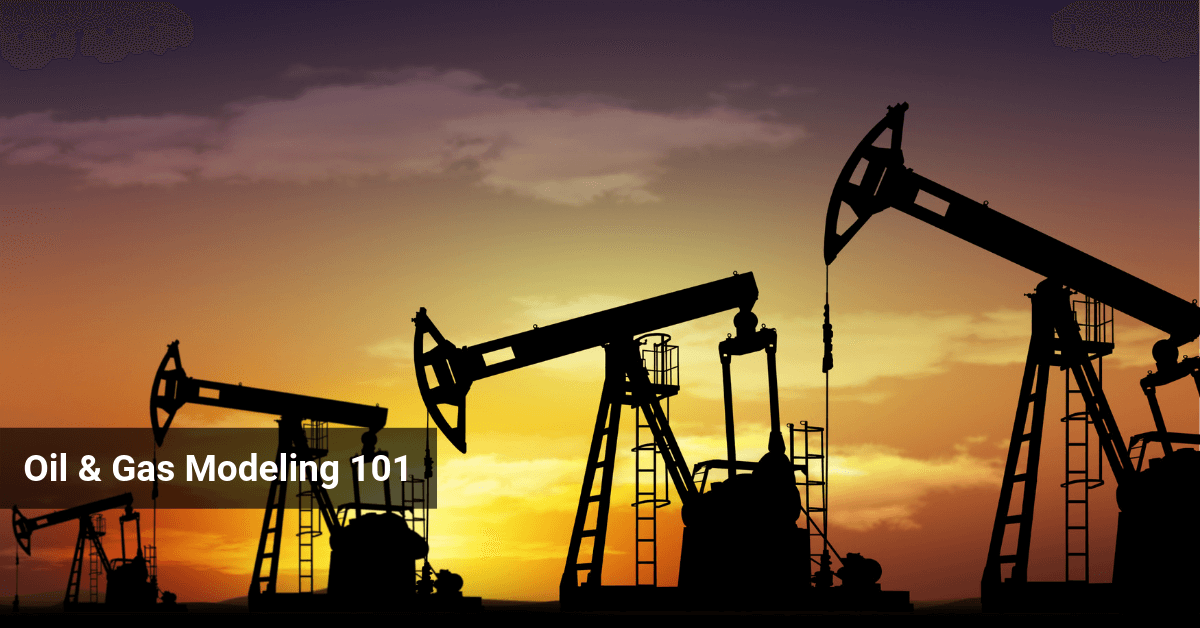 Out of all the industry-specific courses I’ve released, Oil & Gas Financial Modeling has drawn the most interest.

That surprised me at first because there’s no obvious reason why it would be more popular than the others.

The obvious example is mining, where there’s a lot of overlap, but almost anything that depends on commodity prices is similar.

The good news is that while bank and insurance modeling is almost a different game entirely, oil & gas modeling is more like a variation on a game you’re already familiar with.

How Does the Oil and Gas Industry Work?

Oil & gas, mining, and other natural resource companies have a simple business model: find and extract valuable stuff from the ground, turn it into something useful, and then sell it to customers.

But if you read that statement carefully, you’ll immediately see how it gets more complex:

Let’s address point #1 above first and see how the industry is divided:

For purposes of this tutorial, we’re going to focus on Upstream, or E&P (Exploration & Production) companies because those are the most “different” from normal companies – and they’re the most common topic in interviews.

We will also touch on diversified, or integrated major, companies, such as Exxon Mobil since you can learn a lot about other segments by analyzing them.

So how is oil & gas modeling different?

The good news is that unlike banks and insurance firms, oil & gas companies still sell tangible products to people – so your models are more similar.

Before you begin projecting an energy company’s financial statements, you need to know something about the units used.

Oil is typically measured in Barrels (1 Barrel = 42 Gallons, and yes, even countries that use the metric system still use Barrels); natural gas is measured in Cubic Feet (even with the metric system), and mining companies use whatever makes sense (iron ore/coal/aluminum/copper/lead/zinc/nickel/manganese/uranium = tonnes, diamonds = carats, and gold/silver = ounces).

You measure the company’s reserves (how much they have on their balance sheet, ready to extract, produce, and sell) and production (how much they produce and sell each day, month, quarter, year, etc.) in these units.

When you project a natural resource company’s statements, you begin by projecting its production by segment based on its reserves and its historical patterns.

You might assume a modest increase over that number, especially if the company is spending a lot on finding new resources.

And then you deduct this production from their reserves… and (hopefully) replace it with sufficient CapEx spending, linking the dollar amount of that spending to a specific amount of reserves.

Revenue is trickier because you can’t set prices yourself.

But the solution is surprisingly simple: you use scenarios in Excel.

Doing that lets you see the range of possible outcomes for a company based on commodity prices.

There’s more to it than that because you also need to take into account hedging and the fact that the company will never get the full market price due to middlemen, commissions, and so on – but that’s the basic idea.

To see a real-world example of these projections, click here to view a sample lesson from the Oil & Gas Modeling course on Price Hedging and Revenue by Segment.

Energy companies’ income statements do not have the usual Cost of Goods Sold / Gross Profit and Operating Expense distinction that you see for normal companies.

Instead, they are split into Revenue and (Operating) Expenses and then Other Income / Expenses. Here are the typical items:

One final point: oil & gas companies tend to have very high deferred income taxes. Sometimes 75% or more of a company’s income statement taxes are deferred, meaning that they’re not paid in cash in the current period.

You see such high percentages because of the sky-high depreciation, depletion & amortization (DD&A) numbers for oil & gas companies and because many companies record them differently for book and tax purposes.

This doesn’t really affect the income statement, but you do need to add back deferred taxes on the cash flow statement.

Let’s start with the easy part: Shareholders’ Equity is pretty much the same for oil & gas companies.

Sometimes, E&P companies also create a category for PP&E (Plants, Property & Equipment) on their balance sheet and list their reserves by category there (Proved, Unproved, and Other – basically, the probability of those reserves actually turning into something real).

And then on the Liabilities side:

If you’re familiar with normal companies, most of these items are self-explanatory and similar to what you see elsewhere. So I want to focus on the ones that are different or that don’t exist in other industries:

Similar to other industry-specific cash flow statements, oil & gas cash flow statements are very similar to what you see for normal companies: start with net income, add back non-cash charges, take into account working capital changes, and then go through the normal investing and financing sections.

The main differences lie in the magnitude and frequency of some of the items:

How Everything Flows Together

We already went through part of this one with the revenue and expense projections above, but just to recap:

To get a sense of what the financial statements look like for a real company, click here to check out XTO Energy’s statements from just before they were acquired by Exxon Mobil.

A diversified oil & gas company has slightly different statements and you see more items related to its midstream and/or downstream capabilities; for a good example, click here to view Exxon Mobil’s financial statements.

Remember how I said above that oil & gas companies use “different” accounting?

Revenue recognition is straightforward, but the expenses get tricky. You always capitalize acquisitions and development (actually constructing the field or well), and you always expense production.

Under the successful efforts methodology, you expense them, and under the full cost methodology you capitalize them and add that CapEx to the PP&E on your balance sheet.

That seems straightforward, but it gets confusing on the other financial statements because some companies apply these standards inconsistently and use a “mix” of both.

That “dry hole expense” I mentioned above is another name for unsuccessful exploration, and some companies actually add it back on their cash flow statements (long story, but essentially they are using a mix of both standards).

But there is some good news: if you’re outside the US and therefore use IFRS, all companies must use the “successful efforts” standard.

One downside of the full cost method is that you need to test the PP&E balance every so often and apply write-downs if the book value gets out of line with the market value – so write-down and impairment charges are common on full cost companies’ income statements.

The good news is that most of the same valuation methodologies you’re used to seeing – public comps, precedent transactions, and even the DCF – still apply to (most) oil, gas & mining companies.

The bad news is that the metrics and multiples involved are different:

So there are some differences, but the mechanics of selecting and calculating the metrics and multiples for comps remain the same.

You can still use a DCF, but there are a few issues with the traditional Unlevered Free Cash Flow approach:

You do still see DCFs sometimes, but they are more common for midstream, downstream, and oilfield services companies.

The NAV model flips the traditional DCF on its head because you no longer assume perpetual growth.

Instead, you assume that the company adds nothing to its reserves and that it produces 100% of its reserves until it runs out of natural resources completely.

Here’s a rough outline of how it works:

1. Set Up Columns to Track Each Commodity, Revenue, Expenses, and Cash Flows.

You want to track the beginning and ending reserves each year, the annual production volume, and the average price for each commodity; typically you use the same low/mid/high price cases that you used in the company’s operating model.

2. Assume Production Decline Rates and Calculate Revenue Until the Reserves Run Out.

Depending on the company’s previous history, you might assume a decline rate of 5-10% per year – potentially more or less depending on how mature it is.

In each year, you assume that you produce either the production volume of that year or the remaining reserves – whichever number is lower.

Then, you’d multiply the production volume times the average price each year for all commodities to get the revenue by year.

You focus on Production and Development expenses here, both of which may be linked to the company’s production in the first place.

You don’t assume anything for Exploration since you’re pretending that the company finds nothing and dwindles to $0 in the future, and you leave out items like corporate overhead and SG&A because we’re valuing the company on an asset-level.

Simply subtract the expenses from the revenue each year and then multiply by (1 – Tax Rate) to calculate the after-tax cash flows.

Then, you add up and discount everything based on the standard 10% discount rate used in the Oil & Gas industry (no WACC or Cost of Equity here).

5. Add in Other Assets and Business Segments

For example, if the company has undeveloped land or if it has midstream or downstream operations, you might estimate the value of those based on an EBITDA multiple (or $ per acre for land) and add them in.

You add all those up to arrive at Enterprise Value, then back into Equity Value the normal way, and calculate the company’s Implied Share Price by dividing by the diluted shares outstanding.

So that’s a Net Asset Value model in a nutshell. It is widely used in oil, gas, mining, and other commodity-based sectors, and it often produces more accurate results than the standard DCF analysis.

To get a real world example of this NAV model, click here to view a sample video on how to set up the revenue side in a NAV analysis for XTO Energy.

Sum of the Parts

I hinted at this in the last part of the NAV explanation above, but sum of the parts is a very common valuation methodology in the energy industry.

For cases where the company is highly diversified – think Exxon Mobil – you need to value its upstream, midstream, downstream, and other segments separately and add up the values at the end.

So you might, for example, use traditional multiples like EBITDA for the midstream and downstream segments, and then use Proved Reserves or Production multiples for the upstream segment and add them together to arrive at the final value.

Or you might use NAV for upstream and a DCF for other segments and add those up.

There’s surprisingly little to say about merger models and LBO models in the oil & gas industry.

The key differences with merger models:

You could also base a contribution analysis or accretion / dilution calculation on non-financial metrics, such as Production Per Share or Proved Reserves Per Share.

But those make more sense for 100% stock-based deals (you wouldn’t see the impact of foregone interest on cash or interest expense on new debt for these non-financial metrics).

LBO models are even more similar to what you see for normal companies, and just like with merger models you need to include a sensitivity analysis on commodity prices somewhere in your model.

And you already understand why if you’ve made it this far:

Yes, some PE firms do focus on energy and mining, but typically they stick to utility and/or power generation companies rather than unpredictable E&P companies.

Going into this, I actually thought the Oil & Gas tutorial would be the easiest and shortest one to write (whoops!).

There are a lot of differences with oil, gas, and mining companies but the overarching ones are that they cannot control prices and that they have depleting assets that constantly need to be replaced.

Remember that, the accounting tips above, and the NAV model, and you’ll be more than ready to dominate your interviews.