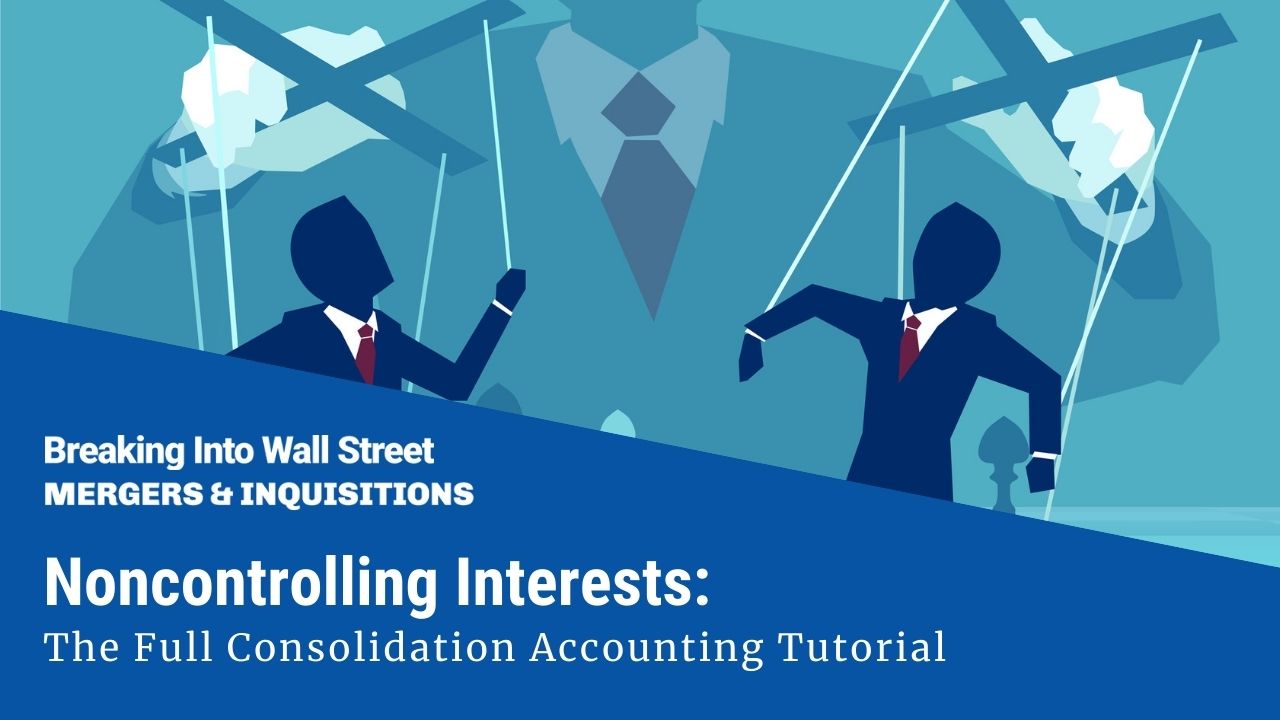 Noncontrolling Interests, formerly known as Minority Interests, seem to be one of the most confusing topics in accounting – and I’m not quite sure why.

But my top theory is that it’s because the “Noncontrolling Interests” (NCI) name describes what they’re not.

It’s similar to labeling an organization a “non-profit” – it tells you nothing about what the group does.

Unfortunately, there’s no way to eliminate this confusion because the more useful name – Consolidation Accounting – is also less common.

People are used to repeating the NCI name and assuming that everyone else knows what it means.

But the good news is that the main points are not that difficult.

Let’s start with the main idea and then move into the step-by-step walkthrough:

You can get this entire tutorial in video format below, along with the Excel file used in the explanations below:

We also cover this topic in more depth in our BIWS Premium package (see the “More Advanced Accounting” module): 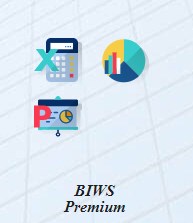 Learn Excel & VBA, accounting, valuation, financial modeling, and PowerPoint for investment banking and private equity - and save $194 with our most popular course bundle.

When a Parent Company (“Parent Co.”) owns at least 50% of another company (“Sub Co.”), the Noncontrolling Interest represents the portion the Parent does not own:

So, if Parent Co. owns 70% of Sub Co., the Noncontrolling Interest on its Balance Sheet represents the 30% it does not own.

The tricky part is that when a Parent owns at least 50%, it must consolidate Sub Co.’s financial statements with its own 100% regardless of the percentage it owns.

It changes only if Parent Co.’s ownership falls below 50%, in which case the equity method of accounting applies.

At the bottom of the Income Statement, you adjust for the portion of Sub Co.’s Net Income that is not attributable to the Parent.

The points above represent what many bankers understand about Noncontrolling Interests.

But it’s also important to note the treatment of Dividends.

But there are two required adjustments:

You combine those and show the $30 in total Dividends as a negative on the Cash Flow Statement.

But since Parent Co. owns a percentage of Sub Co., you also add back the Dividends that go to Parent Co.

How Noncontrolling Interests Get Created: The Full Process

To start, we’ll assume that Parent Co. already owns 30% of Sub Co., so it has an Equity Investment representing 30% of Sub Co. on its Balance Sheet: 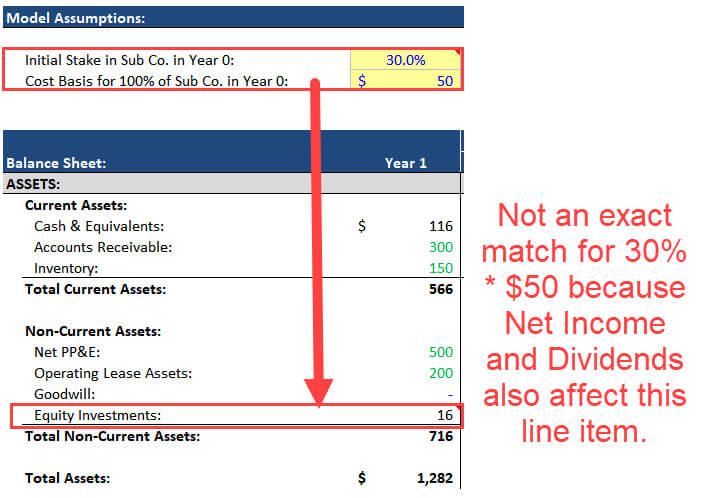 Parent Co. now wants to increase its ownership stake to 70%.

Since this deal will result in ownership >= 50%, Goodwill will be created, and the other line items related to purchase price allocation (asset write-ups, deferred taxes, etc.) could be created as well.

To simplify, we will ignore those and focus on the Goodwill and the write-down of Sub Co.’s Common Shareholders’ Equity.

Sub Co.’s Common Shareholders’ Equity (CSE) is always written down because it no longer exists as an independent entity after the deal closes.

On the Balance Sheet, you add all of Sub Co.’s Assets and Liabilities to Parent Co.’s, but you exclude Sub Co.’s CSE since it’s written down.

If Sub Co. has line items within Equity but outside of Common Shareholders’ Equity, such as Preferred Stock, those will also be combined with Parent Co.’s.

On the Assets side, you add the new Goodwill created in the deal, remove the Equity Investments, and subtract any Cash used to fund the deal:

On the L&E side, you add any Debt or Stock used to fund the deal and create the Noncontrolling Interest based on (1 – New Ownership Percentage) * Equity Purchase Price for 100% of Sub Co. 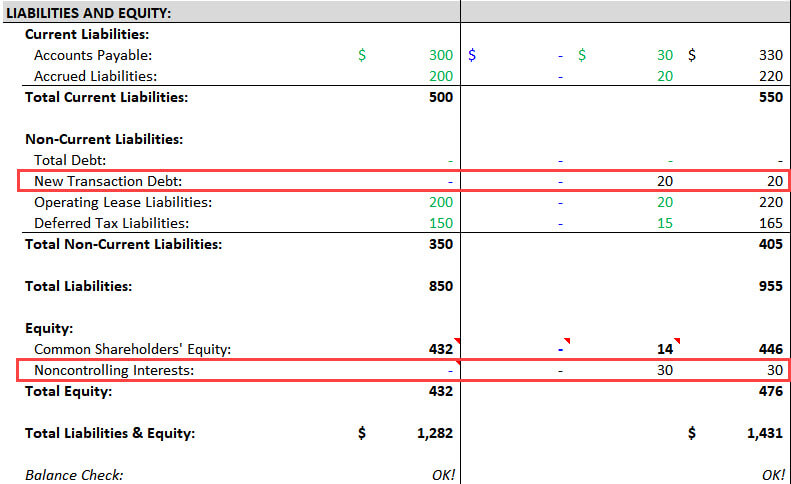 There’s one other adjustment that often gets overlooked as well.

Since Parent Co. purchased the 30% stake in Sub Co. at a different valuation, the Balance Sheet will go out of balance when you remove the Equity Investment and replace it with the new Goodwill, the Noncontrolling Interests, and all the other line items.

To address this problem, you calculate the Premium or Discount to the existing Equity Investment before the deal took place and record it under CSE:

After this initial step, you can model the combined financial statements by assuming that Parent Co. continues to own 70% of Sub Co. 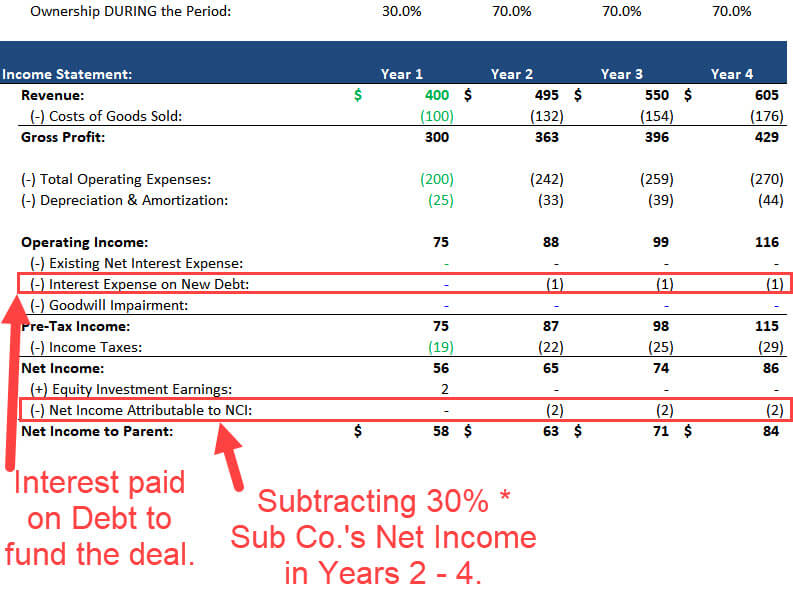 The Cash Flow Statement is more complicated, but it still follows the short treatment above: add together most of the items, reverse the Net Income Attributable to NCI deduction, and add back Sub Co.’s Dividends * Ownership Percentage: 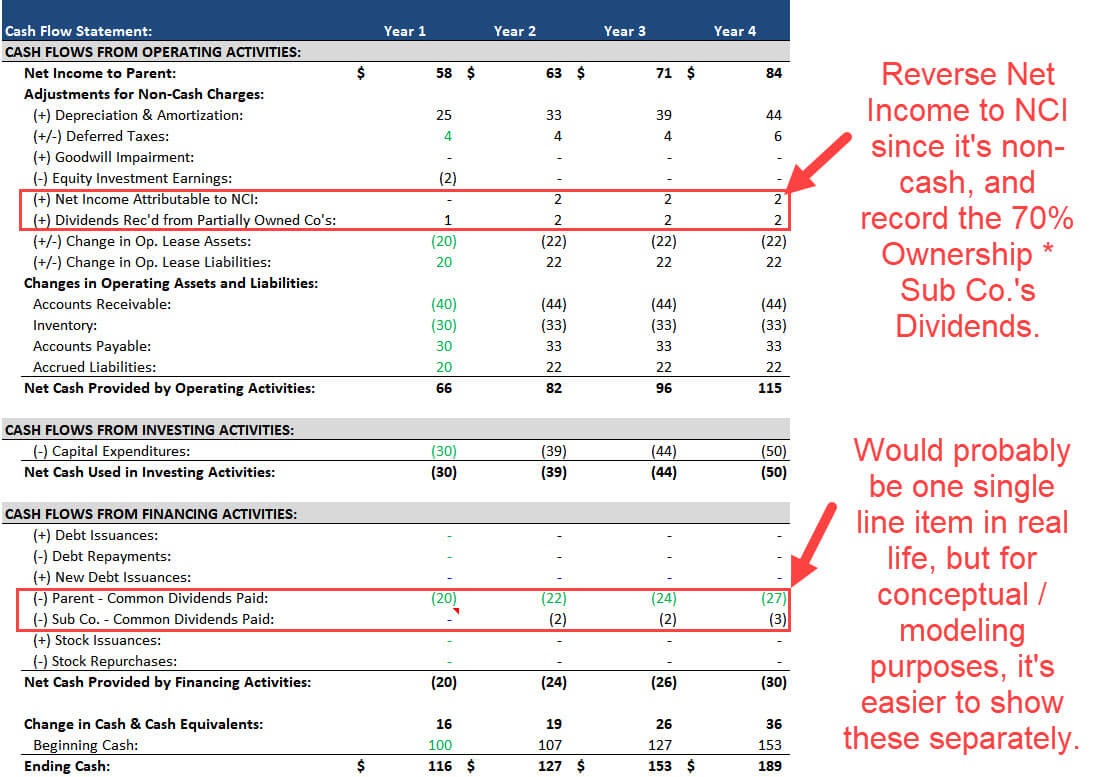 In real life, most companies show a single line item for the Dividends, but we prefer to show Parent Co.’s Dividends separately from Sub Co.’s Dividends for clarity and ease of modeling.

You also need to make sure the first “Beginning Cash” number at the bottom of the CFS links to the post-transaction Cash number.

The Balance Sheet is the most complex part of this linking process, but once again, most of the items are simple additions of Parent Co. and Sub Co. numbers: 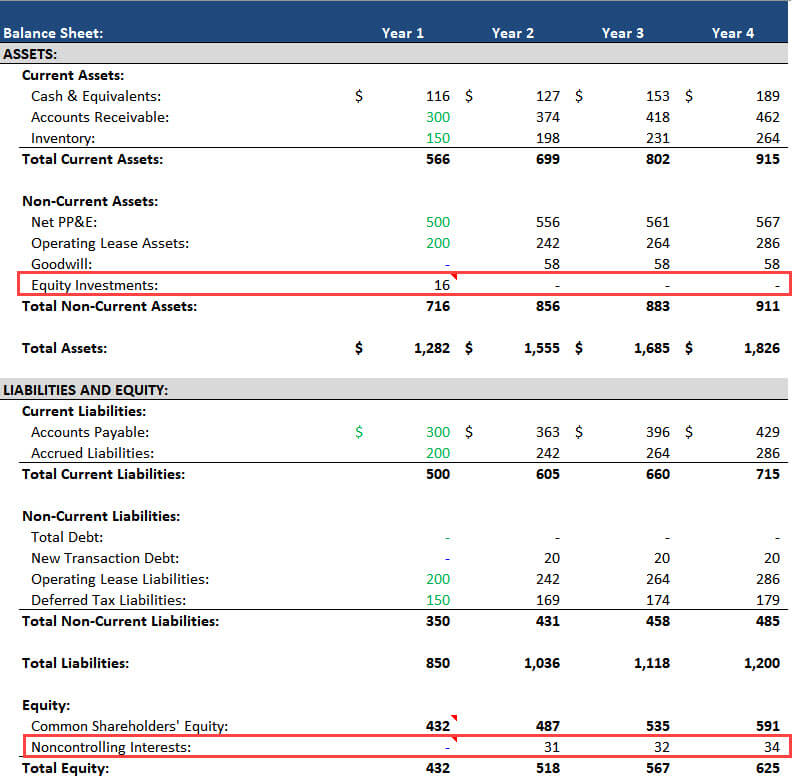 Parent Co. Dividends and Stock Repurchases already have negative signs on the Cash Flow Statement, so that formula subtracts them.

Finally, the formula for the Noncontrolling Interests looks a bit complicated at first:

Again, note the signs: the Sub Co. Dividends is negative on the CFS, so this formula subtracts them.

The Noncontrolling Interests act like a mini-Shareholders’ Equity for the minority shareholders in Sub Co.

In other words, the NCI tracks what happens to the 30% of Sub Co.’s Net Income and Dividends that do not belong to Parent Co.

You can use this simple example to understand:

As a result, the $6 in Net Income Attributable to Noncontrolling Interests increases the NCI, and the $3 in Net Dividends reduces the NCI.

It’s the same as Net Income and Dividends in the normal Common Shareholders’ Equity line item, but it’s only for the 30% that do not go to Parent Co.

In the context of valuation, you always add Noncontrolling Interests in the Equity Value to Enterprise Value bridge: 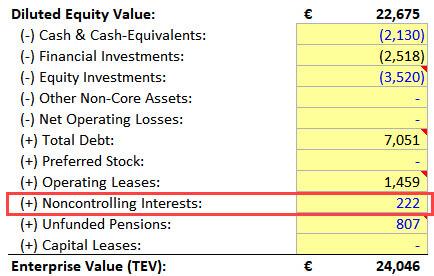 In part, this is because Noncontrolling Interests represent another “investor group” (the minority shareholders of Sub Co.), but it’s also to construct proper valuation multiples.

If you do not add the Noncontrolling Interests, Enterprise Value will reflect only the value of the stake owned by Parent Co., such as the 60%, 70%, or 80% here.

It’s best to use the market value when adding the Noncontrolling Interests, but if you cannot find it, the book value is fine – especially if the NCIs are small.

In projection models, you tend to make simple assumptions for the NCI line items, such as fixed-percentage growth rates for their Net Income and Dividends.

These items rarely make a big difference unless the partially owned companies represent a substantial portion of the Parent Company’s financial results, such as 20%+.

The last step of the process shown above is deconsolidation: the steps Parent Co. takes to move from a majority stake in Sub Co. to a minority stake or no stake at all.

At a high level, you remove all of Sub Co.’s Assets and Liabilities, remove the Goodwill created in the original deal, recreate the Equity Investment (if applicable), and record a Gain or Loss on the entire transaction.

Determining the Gain or Loss is tricky and outside the scope of this free tutorial; it also has a 0.00001% chance of coming up in interviews.

Noncontrolling Interests rarely matter in merger models and LBO models because they rarely change when these deals take place.

So, unlike Excess Cash or Refinanced Debt, they do not affect the net deal funding, and are therefore unlikely to show up in the Sources & Uses schedule.

If the acquirer does want to modify a target’s stakes in other companies, it might do so after the deal closes and it can evaluate the target’s performance in more detail.

The bottom line, though, is that if you understand the main points outlined here, you should be in good shape for anything related to Noncontrolling Interests in interviews – even if you feel you’re not in complete control the whole time.