2022 Mid-Year Investment and Market Update: How to Survive When Clowns Are Running the World

Toward the end of 2020, my most crypto-bullish friend showed me a “DeFi” service that allegedly paid 10 – 15% yields for investing.

I looked at it and said, “How are they doing this if interest rates are currently 0% or negative? They must be issuing huge amounts of risky loans that will default when crypto prices fall.”

He then sent me a YouTube video kind-of-sort-of explaining it, but mostly hand-waving the mechanics.

I said, “So, do you understand what they are doing? Could you explain it to a 5-year-old?”

He dodged the question and continued to give me the DeFi sales pitch.

I stayed far away from this service, while he presumably put in some money.

And he probably did earn a 15% yield – right up until the market for crypto lending, NFTs, and other risky “assets” crashed in the first half of 2022.

Like almost everyone else, I’m also down in the year so far.

But since I sold most of this junk before the crash (or never bought it in the first place), I’ve avoided the worst of it and have had some fun standing on the sidelines watching the collapse.

For accountability, though, let’s start with a quick portfolio review:

My Current Portfolio and YTD Performance

Here’s what it looks like as of July 5th, with the differences vs. January 1st in brackets:

Crypto is down tremendously because I sold most of my remaining position in Q1.

When I sold most of my crypto, I left some of the proceeds in cash and put the rest into “non-precious metals natural resources” (oil, gas, agriculture, minerals, timber, water, uranium, etc.)

But I made this change too late, never bought a huge percentage, and did not go all-in on energy – so it wasn’t enough to save me this year.

That explains the results (with prior years’ changes in investable assets shown for reference):

If you take out my contributions from this year, it’s more like an 18-19% decline.

My usual goal is to earn at least 10% per year, so I’ve fallen far short of this.

As I predicted back in January, rising interest rates made equities, real estate, and crypto fall (“plummet” might be more accurate in a few cases).

But I didn’t care too much because I sold most of my remaining crypto around the time of that article, and my equities were weighted toward “value,” which tends to outperform growth in this environment.

From January through May, value stocks held up fairly well, shrugging off Russia’s invasion of Ukraine, the “non-transitory” inflation everywhere, and rising rates. 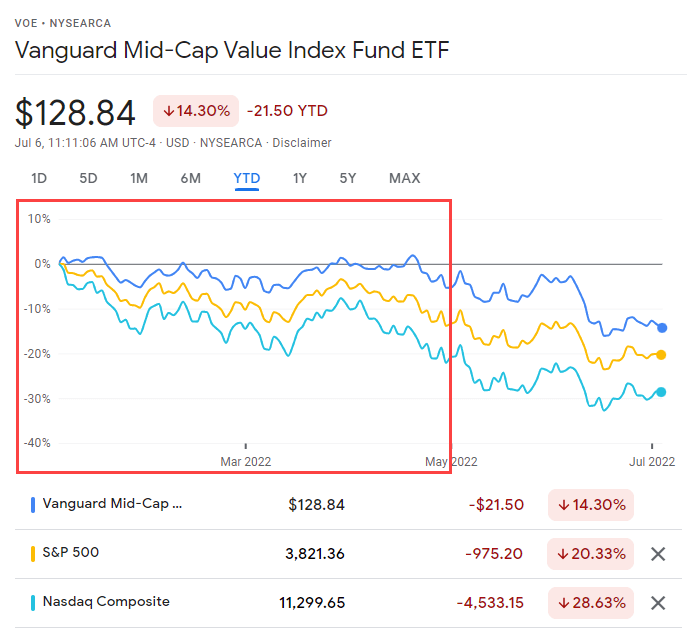 But in June, sentiment quickly shifted, and fears of a looming recession began to outweigh concerns about inflation and rising rates.

And with all three ingredients – a recession, inflation, and rising rates – no sector or asset class performs well.

In short, the factors that helped me were:

I’m not sure I believe these numbers because they’re dramatically different from REIT public market performance.

But it is plausible that smaller properties outside of major cities have held up better than huge office buildings in SF or NY that are now occupied by rats and homeless people.

Factors working against me included:

The main realistic option for outperforming in this environment is to trade individual stocks.

For example, many biotech names have nothing to do with overall market trends and trade based on clinical trial results, acquisitions, and new product news.

If you’re still confused about what “crypto” is or how it fits into the financial ecosystem, this chart of 2022 YTD performance vs. other assets might help: 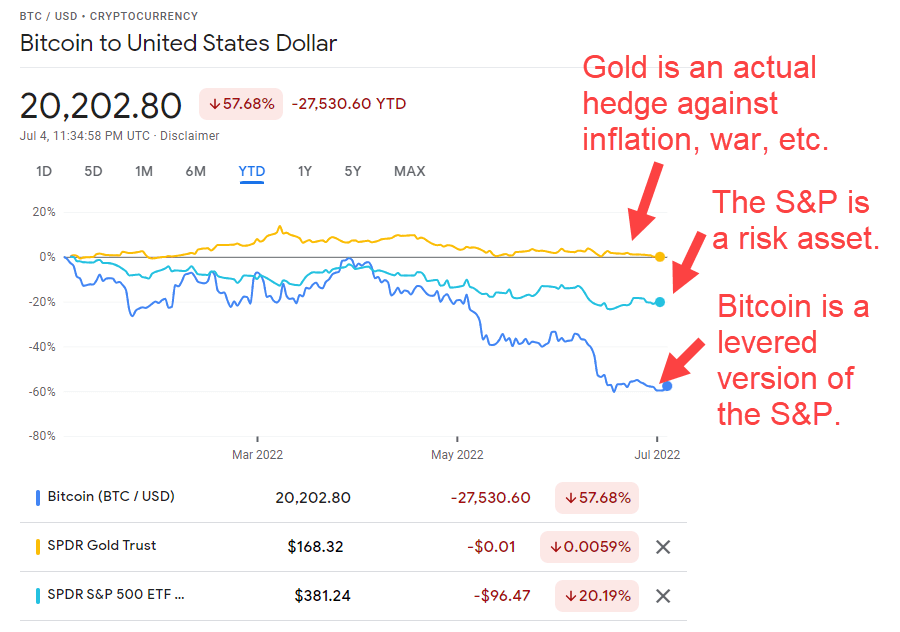 What’s happening now is a reboot of the subprime mortgage crisis in 2008: overly leveraged lenders making risky bets are folding left and right following a crash in the underlying asset prices.

Celsius was the highest-profile one so far, but others, such as Voyager Digital and CoinLoan, have “suspended” trading, withdrawals, and deposits or are filing for bankruptcy.

And then there was the fiasco with TerraUSD and Luna, the “stablecoins” that were supposed to be pegged to the U.S. dollar… until they crashed by 99.9%.

Crypto is legalized gambling with some potential use cases in specific situations.

The main problem is that it’s a solution in search of a problem.

I can see the use case in emerging markets with very high inflation rates, unreliable currencies, and difficult money transfers, but outside of that… I’m not sure.

In each case, yes, there was far too much hype and hundreds of failed companies – but I could immediately see the potential value of the technology to the average person.

But I do not see how my 70-year-old parents would find crypto useful for anything aside from speculation.

I’ve listened to people like Marc Andreessen argue in favor of Web3, NFTs, and everything else, and… I’m not convinced.

Maybe I’m too old to understand, or I need to migrate my consciousness to the metaverse.

I bought and sold crypto based purely on momentum.

A few of my sales were timed perfectly, but most were not – so, cumulatively from 2013 to 2022, I earned gambled my way into a 4x total gain.

I’m not sure I learned much in the process other than: “Follow a squiggly line on the chart. Buy when it starts moving up. Sell when it seems to have stabilized.”

Of course, crypto could come back, especially if central banks start slashing interest rates to “fight the recession.”

If prices fall a lot more between now and then (e.g., Bitcoin under $10K), I might buy some more poker chips at the table, but otherwise, I’m out for now.

After two years of a pandemic and fights over testing, vaccine/mask mandates, and other restrictions, I thought that politicians could not possibly get any dumber.

But then Russia invaded Ukraine in February, and I was proven wrong once again.

To be clear: yes, Putin is obviously in the wrong.

There is no justification for invading another country no matter the historical relationship, perceived “threats,” or alleged grievances.

(This statement also applies to all the U.S. misadventures in the Middle East, Vietnam, etc.)

That said, the response to the invasion and the ongoing conflict is so bad it could almost be a parody.

Even if you’re a steadfast supporter of Ukraine, it’s worth asking questions like: “Was this the correct response? Did the response deliver the promised results? Should we have done something differently? Should we stay the course?”

The basic strategy of the U.S., EU, Japan, and other developed countries is a combination of sanctions on Russia, except for its oil and gas, of course, and a non-stop supply of weapons to Ukraine.

Most, if not all, Western companies have left Russia or sold off their operations there.

So… this strategy has to be working, right? Right?

Unfortunately, the data offers a much more mixed view of the situation:

So, now we’re stuck in a situation where the conflict won’t end because Ukraine has just enough support to avoid collapsing but not enough to win, and the rest of the world gets higher inflation and food and energy shortages.

In crafting these policies, our feckless leaders seem to have forgotten a few basic points:

If the goal is to “fight” Russia without putting troops on the ground, the solution is simple: reduce energy prices worldwide by increasing the market supply.

That means: “Drill more, mine more, build refinery capacity, and build nuclear plants… and maybe some solar and wind to placate the ESG activists.”

Significantly lower energy prices in the global markets would harm Russia’s war efforts much more than sanctions or the ridiculous “price caps” the G7 has proposed.

But our clownish leaders are under the impression that the world does not need oil, gas, fertilizer, or food, and that the average person is willing to starve to “support democracy.”

Rather than increasing food and energy supplies, they’re attempting to reduce demand by inducing a global recession and telling everyone to live in caves.

If you want a preview of what that means, go to Germany and ask them about the state of the world’s largest chemicals hub or power prices there: 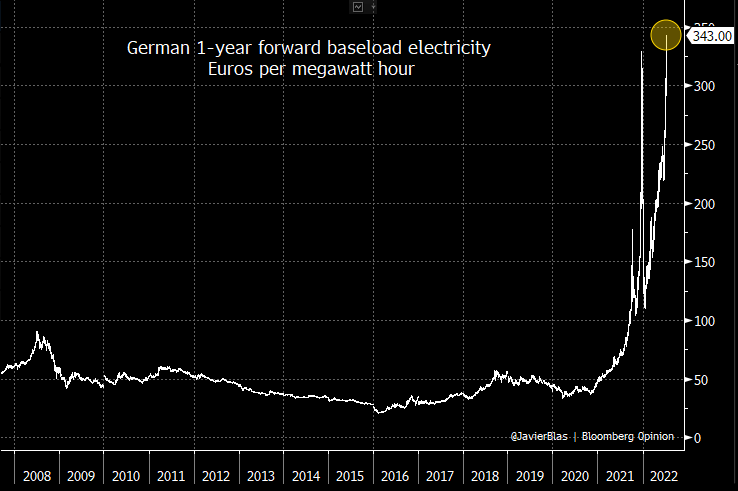 I’m not optimistic about the rest of the year because, if anything, the trends above will only get worse.

Even with all the declines noted above, the S&P is still well above its pre-pandemic high from late February 2020, and it could easily give up the rest of its gains.

It might end the year lower, but I don’t think it will drop below 2,000 unless several additional disasters come along.

I also expect that we’ll see more of the real world spilling over into the markets in the second half of the year.

Just look at what has been happening in places like Sri Lanka or Peru for a preview.

I am still bullish on commodities over the next 10 years, but in the short term, prices could easily continue their decline, especially if there’s an actual recession.

So, I will most likely sell a good chunk of my liquid assets and bring my cash percentage up to ~35%.

I’ll still be down for the year, but I would rather cut my losses here than be exposed to even greater drops.

And if all the current disasters resolve themselves with a magical rainbow and dancing leprechauns, maybe I’ll pivot and launch a new crypto lending service.